And Tod Browning made so-called horror films that are unlike anyone else’s. There’s no other film much like THE UNHOLY THREE. I say “so-called” not out of derision, but because I wouldn’t know how else to classify some of his movies than as horror. DRACULA (1931) more obviously fits the label, but what would you call THE UNKNOWN (1927)? Pulp melodrama? Sideshow soap-opera? Circus noir?

THE UNHOLY THREE is classified on IMDb as “Crime” “Drama” “Romance.” Let me tell you about the plot, and you decide: 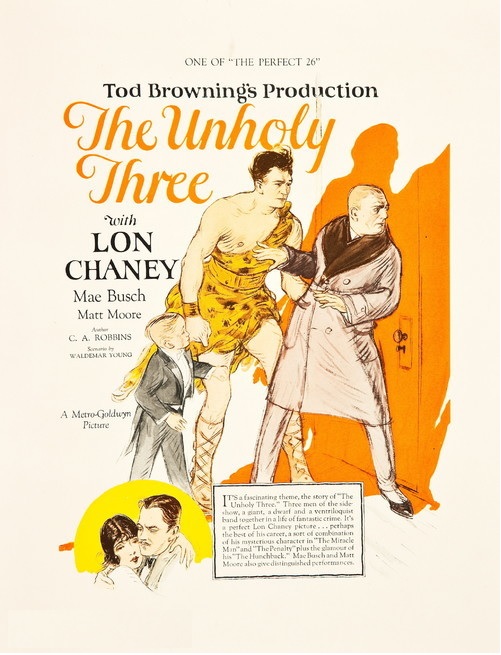 Lon Chaney plays Professor Echo, the criminal-minded ventriloquist in a traveling circus sideshow. Harry Earles, best known as the lead in Browning’s later film FREAKS, and then later still as a member of the Lollipop Guild in THE WIZARD OF OZ, plays Tweedledee, the most belligerent and violent member of the trio. And Victor McLaglen, later to find character-actor success in sound films such as GUNGA DIN and John Ford’s many pictures with John Wayne, such as FORT APACHE and THE QUIET MAN, plays Hercules, the circus strongman, and secretly the romantic of the group.

Echo, Tweedledee, and Hercules: The Unholy Three. This treacherous trio’s first act after leaving the circus: Opening up a pet store! Not kidding. Each plays a role. Hercules works as an employee. Okay, fair enough. But Professor Echo goes into disguise as “Granny O’Grady,” an elderly woman who tends after a baby in a stroller. That baby: The malcontent Tweedledee, in the role of “Little Willie.” From this base of operations begins the Unholy Three’s spree of robberies, and before going much further let’s take stock of where we are with the original question.

How would you classify this movie?

You’ve got the Man Of A Thousand Faces as a devious ventriloquist and then in the dual role of a kindly grandmother, and a surly little person pretending to be a baby, while both of them team up with a very large man in order to steal jewelry. Is it a crime film? A gender-bender? A pre-Code, late-silent-era proto-noir? Another example of circus noir, the genre I just made up three paragraphs ago?

And did I mention (spoiler warning, and long story) that this film has a gorilla* attack?

THE UNHOLY THREE was written by Waldemar Young, who wrote several films for Browning and Chaney, along with ISLAND OF LOST SOULS. Young adapted the novel by Clarence Aaron Robbins, aka Tod Robbins, best remembered today if at all for writing “Spurs,” the short story that became Browning’s most notorious film, 1932′ FREAKS. That film, like THE UNCANNY, like THE UNHOLY THREE, springs out of the circus sideshow setting, which would have been personal to the director. Tod Browning grew up in the circus, and his work shows a true affinity for the oddballs and the out-there. Often Browning’s protagonists, like Harry Earles’ character Hans in FREAKS, are endearing, or tragic, or both. But just as often, Browning gives his quote-unquote unusual and differently-abled characters, like Harry Earles’ character in THE UNHOLY THREE, the respect of letting them be villainous. Endless sanctification can be patronizing. There’s nothing patronizing about Echo and Tweedledee in THE UNHOLY THREE (the more sensitive Hercules, and the more traditional romantic leads played by Mae Busch and Matt Moore, could maybe be concessions to the heart-on-sleeve silent-era marketplace). In THE UNHOLY THREE, even Echo’s villainy is dwarved by that of Tweedledee. No pun intended when I initially wrote that, but recognizing that it’s there, I’ll leave it. 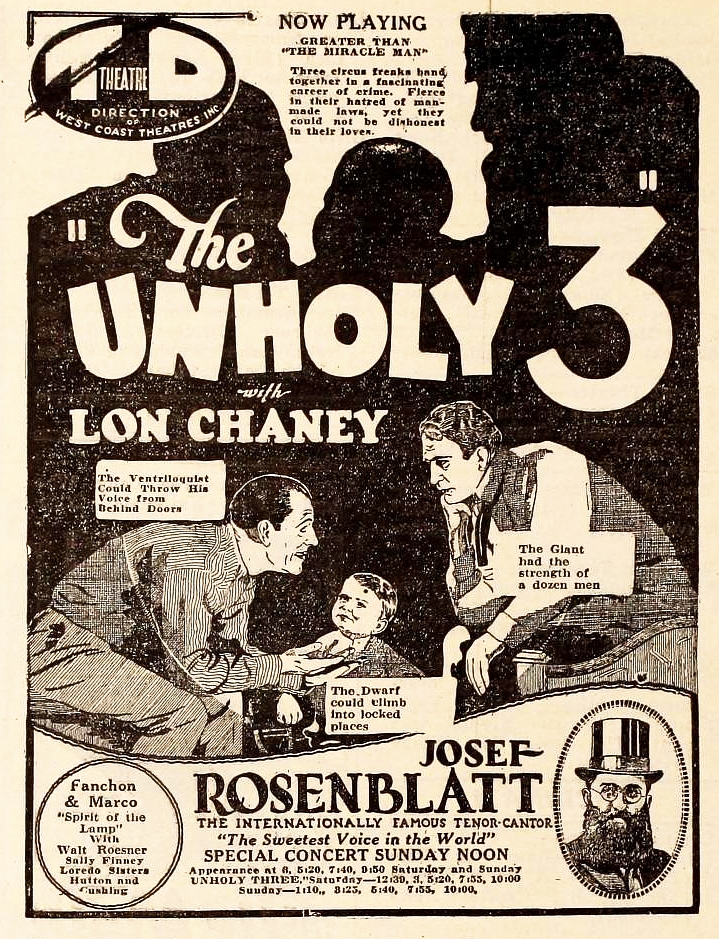 The first of Tod Browning’s eight collaborations with Lon Chaney, THE UNHOLY THREE was released at the beginning of the end of the sound era. It was a massive hit in its day. It’s hard to imagine anything like it happening, here in the 21st century. The closest thing I can conjure is: Remember the Red Triangle Gang from BATMAN RETURNS? That gang of evil circus folk? Cool. So subtract Batman. The movie’s going to be all about their crime wave. Would I go see that movie? Tomorrow. Would it pop off in the multiplex, or on Disney+, in any kind of noticeable numbers? Doubtful. Times change. Tastes change. And audiences now are savvier in all sorts of ways — for example…

*In 1925, filmmakers could get away with using a chimpanzee and camera trickery to portray a giant rampaging gorilla. It’s not to say audiences were less sophisticated then, only that back in those days, the wider public may not necessarily have seen enough of gorillas and chimps to be able to tell the difference.

When I say there are no two movies like THE UNHOLY THREE, I’m not being entirely honest. There was a remake five years later, after the advent of sound. While Lon Chaney and Harry Earles came back, Tod Browning had moved on to Universal and Victor McLaglen had embarked on the road to leading cavalries with the Duke. Charles Gemora played the ape. Check out the poster of the 1930 remake (where new-Hercules Ivan Linow is drawn to look like Dave Bautista — think anybody would let DG remake the remake?) 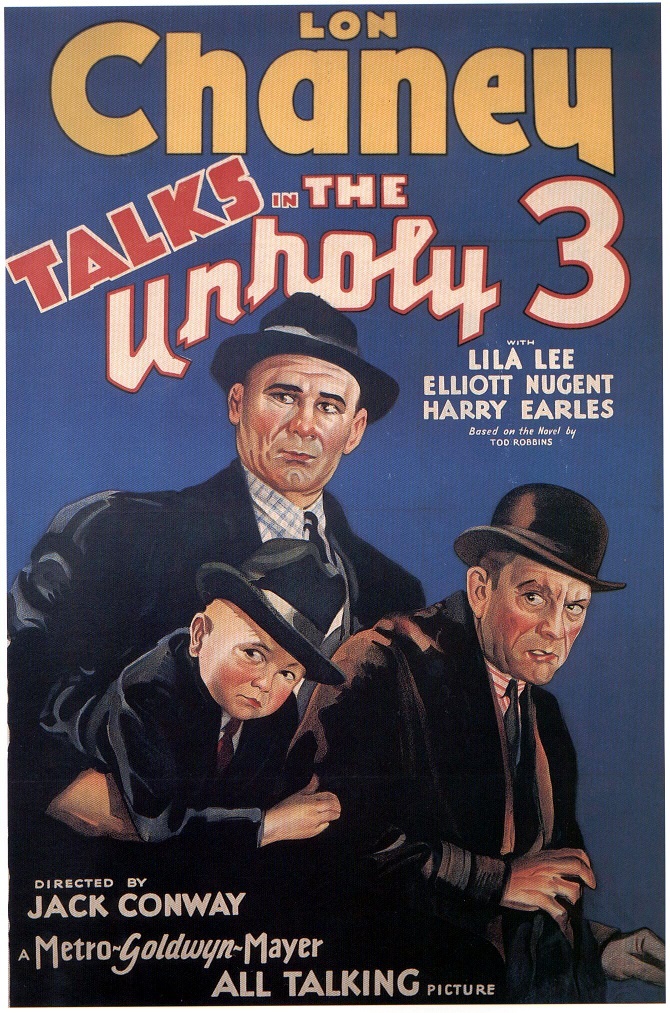 The main draw of THE UNHOLY THREE in 1930 was to hear the speaking voice of Lon Chaney, the silent screen star who played so many memorable monsters, all of whom have voices existing only within our collective imaginations. Honestly, it’s not that weird. Is that a disappointment? It’ll be forever unclear if Chaney, like Harry Earles, like Victor McLaglen, would have kept working into the sound era. He died one month after the film’s release, meaning this was his first, last, and only talkie.

See both THE UNHOLY THREE and its remake for their respective virtues, but for my money there are few movies on the planet that can match the 1925 THE UNHOLY THREE for its otherworldliness. Only there will you see Lon Chaney playing a ventriloquist, an art entirely centered on the premise of sound, in its original and counter-intuitive silent form. Only there will you see the strange alchemy of Chaney and Browning, the performer whose transformations are still shocking and delightful today and the filmmaker who presented his talent onscreen more effectively than almost any other, due to their innate kinship as outsider artists.  Browning & Chaney, to me, are a director-star pairing on par with Leone & Eastwood, Scorsese & De Niro, Woo & Chow, Hill & Grier, Needham & Reynolds — take your own pick. Moving pictures don’t get more captivating than this one, and in this case at least, the silence is almost even part of the appeal. Watch it, and travel.