What was the trigger for Quentin Tarantino to cast Robert Forster as bail bondsman Max Cherry in JACKIE BROWN?  Was it his performance as a Chicago journalist in Haskell Wexler’s MEDIUM COOL? As the object of Marlon Brando’s affections in REFLECTIONS IN A GOLDEN EYE?  Or as the cop investigating the goings-on in Lewis Teague’s ALLIGATOR?  With a career as wide and storied as Forster’s, it could have been almost anything.

But it may very well have been THE BANKER. 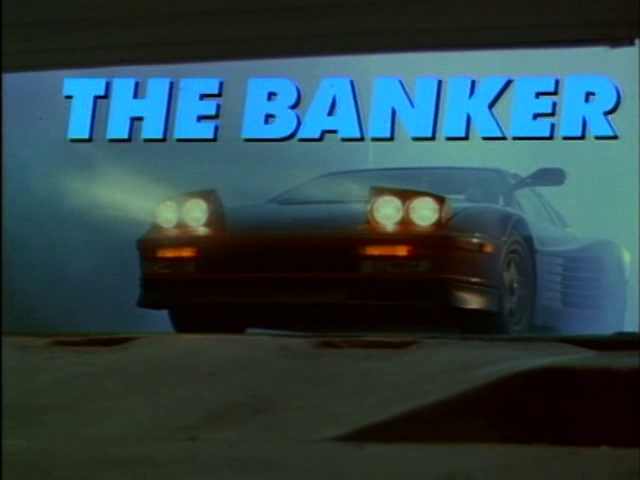 According to THE BANKER screenwriter Dana Augustine, the flick was regularly featured on his favorites shelf as a video clerk, and was cited as one of the reasons that Forster was cast in the role that landed him an Oscar nomination.  It’s not that wild an idea – Tarantino certainly knows his genre obscurities, and that he’d seen the film certainly seems likely.  It’s also not that hard to see a line between Cherry and his role in THE BANKER, that of mildly sarcastic, charismatically aloof police sergeant Dan Jefferson.

Sgt. Jefferson is the type of role Foster could ace in his sleep.  First seen recovering from a hangover in his nephew’s treehouse, Jefferson is a world-weary stock cop archetype with an ex-wife and tendency toward snide comments and calling his new partner “kid” instead of his actual name.  But thanks to Forster’s committed performance and a fair share of clever dialogue, Jefferson is also the sort of character you’d love to see again, a bleary-eyed old pro who sighs as though he’s been done with all of this for decades, yet still carries enough emotional weight to show that he sincerely does care for the world around him. 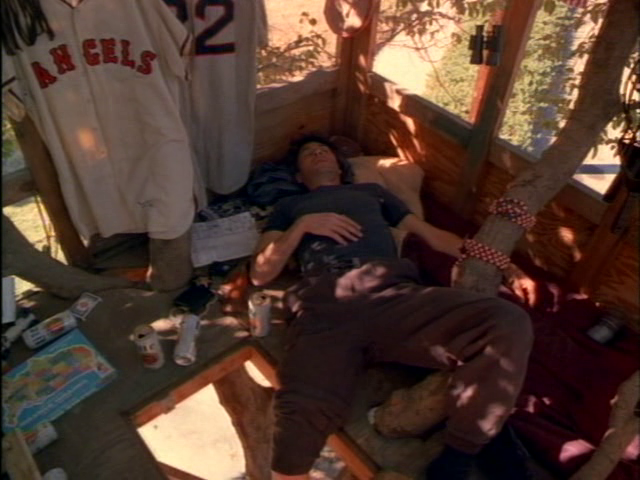 It’s the attention to little details like these that makes THE BANKER rise above the standard ‘80s cop thriller.  There’s nothing special about the set up – wealthy banker Spaulding Osbourne (Duncan Regehr, best known to genre audiences as Dracula in THE MONSTER SQUAD, but whom I’ll always think of as The Family Channel’s Zorro) is killing high-class prostitutes due to his own God complex and the cops are trying to track him down.  But the screenplay by Augustine, Richard Barndes and director William Webb has enough detail and cleverness to justify its inclusion on the “staff recommends” wall of a certain genre filmmaker.

The film gets your attention right off the bat when, after a softcore-level sex session with the title psychopath, a call girl dares to look into his wallet when he goes to the potty.  He returns dressed only in a towel, pointing a crossbow with a laser sight directly at her head.  It does not end well for the girl. 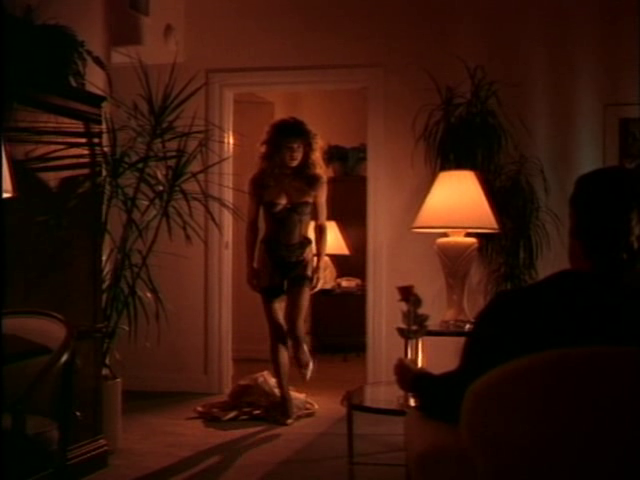 Our Sgt. Dan Jefferson and his new partner Eduardo (Juan Garcia) are sent in to investigate by chief Richard Roundtree (who played almost the same role in the director’s PARTY LINE the previous year), and discover that the body has been “dissected.”  Jefferson deadpans, “This isn’t just a murder, kid, this is a work of art,” though we never get to see the bloody results.  We do, however, see some weird graffiti that Eduardo recognizes as South American.

Also looking into the case is Jefferson’s ex-wife  Sharon (“Major Dad”’s Shanna Reed), a television reporter stuck doing human interest stories about sandcastles and looking for her big break.  When her story is taken over by a line-flubbing news anchor, Sharon goes on an on-air rampage complaining about how the death of a woman deserves more than an “on a lighter note” coda.  Despite her boss’s attempt to fire her, she receives plenty of public support and soon becomes the on-air face of the story.

Meanwhile, our wealthy villain continues his low-rent AMERICAN PSYCHO rampage, picking off ladies filtered to him through the hands of seedy pimp Cowboy (Jeff Conaway), who’s introduced by fondling a topless “underage” girl.  Regehr is clearly enjoying the hell out of playing Osbourne, even as his accent wavers all over the place (it’s a Canadian playing a vaguely-British Californian with an obsession for South America, so you can understand the confusion), and watching him snarl his lines in body paint or staring at his wall of televisions from his giant leather chair is a monstrously ridiculous sight only late ‘80s thrillers can deliver.

It all begins to converge, of course, when Osbourne starts stalking Sharon and Jefferson has to come to the rescue, but THE BANKER is more about the journey than the inevitable destination.  The dialogue is relatively crisp and even gives minor characters something to do – the prostitutes in particular are treated with a fair share of dignity, as Deborah Richter’s Melanie is obviously doomed but seems to have a personality within just a few lines of dialogue, and we briefly even see Jefferson getting ice cream for one of the ladies of the night he’s watching out for.

Parts of THE BANKER don’t work, and Sharon in particular is a bit of a problem character.  Instead of looking like she’s trying to fight against the apathy of the media with regards to the treatment of human life, she just comes off like she’s frustrated by everything around her, to the point where you wonder why the hell Jefferson was with her in the first place.  There’s no way there wouldn’t have been a firestorm after she says “asshole” on the air, despite how good of a rejoinder “As long as she doesn’t say fuck, we’re fine” the editing crew has.

THE BANKER, however, benefits from some solid direction from Webb, who churned out a number of the better low-budget thrillers of the era with his Westwind productions, including the aforementioned PARTY LINE, the Zach Galligan flick THE PSYCHIC and the Rod Steiger psycho tale THE NEIGHBOR.  (For about a decade, all thrillers were contractually obligated to be titled as the definitive member of a profession, hence THE TEMP, THE PAPERBOY, THE SECRETARY… I could go on.  And I will, later.) The VHS transfer does the film no favors, giving the flick an incorrect aspect ratio that leads to an occasional boom mike and washing out the colors most effectively used in the stalking sequences, but you can still see artistry at work, even if it’s just trying to spice up a rudimentary storyline.

But the biggest attribute of THE BANKER is clearly Forster, who’s never less than a joy to watch and does great work with the sufficiently witty dialogue he’s given.  Whether he’s making passive-aggressive comments to his ex-wife about their dog or advising his never-seen snitch Ira to remember to gargle, he’s a fully-formed character, and one that makes THE BANKER a worthwhile ride, even if the movie would have been over in a half hour if the cops just had caller ID.