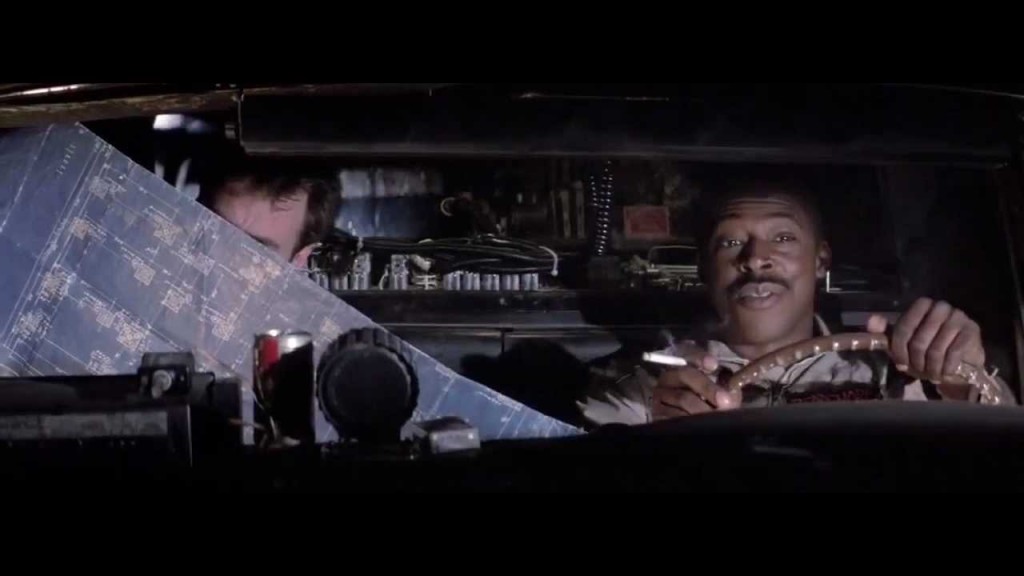 One minute and twenty-seven seconds.

Maybe some will paint that label as a slight exaggeration, but I figure it’s harder for the scholars to argue the point when the numbers are that specific.  Besides, I had to get your attention somehow. I’m sure you can find a better seventy-seven seconds in BATTLESHIP POTEMKIN, or a superior ninety-seven seconds in TOKYO STORY, but at an ultra-precise eighty-seven seconds, I hereby submit GHOSTBUSTERS — in particular the scene where Dan Aykroyd and Ernie Hudson’s characters drive over the Brooklyn Bridge at night on the way back from yet another business call, and get to talking about what’s really going on.

Check out the scene, read my transcription, and I’ll see you on the other side for a bit more conversation: 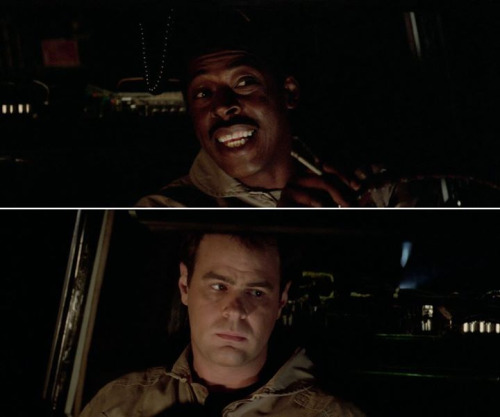 Nighttime.  A Carpenter-esque synth score plays as the Ghostbusters hearse drives over the Brooklyn Bridge, lights flashing.  Manhattan Island is the backdrop.

Hey Ray — you believe in God?

Yeah well I do.  And I love Jesus’s style, you know.

This roof cap is made of a magnesium-tungsten alloy.

What’re you so involved with there?

These are the blueprints for the structural ironwork in Dana Barrett’s apartment building, and they’re very, very strange.

Hey Ray — do you remember something in the Bible about the last days, when the dead would rise from the grave?

I remember Revelations 7:12…  “And I looked, as he opened the sixth seal, and behold there was a great earthquake.  And the sun became as black as sack-cloth.  And the moon became as blood.”

“And the seas boiled, and the skies fell.”

Every ancient religion has its own myth about the end of the world.

Myth?!?  Ray, has it ever occurred to you that maybe the reason we’ve been so busy lately is because the dead HAVE been rising from the grave?

How about a little music?

Winston takes a drag as Ray reaches for the radio.

Corniest post-disco, sub-Rick-James music cue of the entire film.  Day is now breaking.  Not for nothing, but it‘s tough for the post-9-11 viewer not to notice the Twin Towers in the background skyline.

By the age of fourteen, I was probably already qualified to write a dissertation on this movie, for love of how many times I’ve seen it.  I’m sure I’m far from the only one.  But I’m just talking here about this one scene, in many ways the fulcrum of the movie.  It is so brief that it barely registers — but it does register, consciously or not, and enough to matter in the grand scheme.  It effectively moves us from what has gone before, all the comedy and one-liners surrounding the building of the ghost-busting business, and it prepares us for an ending where we, the audience, believe as much as the characters do that a giant marshmallow man is really stomping through New York City church rooftops.  By then that particular onslaught is not just funny, it’s almost scary.

That all happens due to the methodical way that Ivan Reitman as director, and Dan Aykroyd & Harold Ramis as writers and as their respective characters, parcel out information that informs and prepares us for the next otherwise implausible occurrence.  It’s primarily Bill Murray’s job to maintain the comedy throughout, which he absolutely does.  But you already knew that.

So, this “Judgment day” scene does a couple great things:

1.) It’s the one and only scene with absolutely no laughs in a movie that is otherwise completely full of them.

2.) It adds a depth and a mythology to a movie that too many people consider a toss-off insubstantial comedy.  I love CADDYSHACK, STRIPES, TRADING PLACES, SPIES LIKE US, FLETCH (etc.), more than most movies ever, but none of those movies have that extra mythical weight that GHOSTBUSTERS does.  This here is a dramatic scene.  Nothing funny about it – a purely dramatic scene.  That makes it unique in this entire movie.  This scene sets the stakes, which go beyond life and death for the main characters and are about nothing less than the fate of the world entirely.  Ambitious much?

3.) It also offers a brief, understated showcase for the underrated Ernie Hudson.   The word has always been that this role was earmarked by Aykroyd for Eddie Murphy.  While Eddie Murphy is, for me, second only to Bill Murray in the great pantheon of film comedy, I still feel glad that Hudson got this role.  As far as I’m concerned, Eddie Murphy could and still can do anything he sets his talent to, even drama.  But no, he couldn’t have pulled this scene off at that stage of his career, not in 1983, not [blasphemy!] as effectively as Ernie Hudson did.  I say this not to compare the two, just to show how much I appreciate the one by invoking my love of the other.  Ernie Hudson is the 6th or 7th funniest person in GHOSTBUSTERS at best, but he brings a touch of realness to it that I think the movie needs in order to work as well as it does. 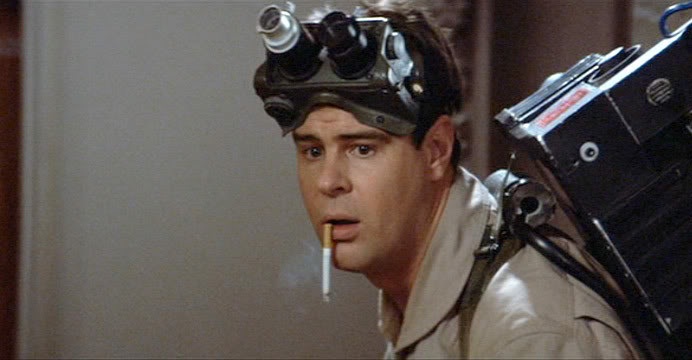 Dan Aykroyd’s no slouch as an actor either, in my opinion.  And also in the opinion of the 1990 Academy Awards, who so adored him as “Boolie” in DRIVING MISS DAISY.  I just felt like typing the word “Boolie” just there.

In general, throughout the running time of GHOSTBUSTERS (with the exception of the “ghost head” scene, which simply does not belong), Aykroyd is invaluable.  He’s a real team player and lets Bill Murray and Harold Ramis take most of the major laughs.  This was at the height of Aykroyd’s popularity and dominance too – people forget what a huge star he was in 1983, when the movie was being put together.  Not only that, but he’s the only one of the three leads who could have pulled this scene off believably in the scope of their characters.  Murray would have come off too arch, and Ramis would have come off too cartoony.  Aykroyd is just so obviously invested in the moment that it plays beautifully. This is his role throughout the movie, really — the true believer — and again, the movie, which is otherwise so anarchic and hysterical, simply wouldn’t work without that sincerity.

Praising Dan Aykroyd is no hipper to do now than when I did it as an undergraduate chimp sitting amongst serious students of Renoir and Brakhage, but how can you not be warm on the guy?  I love the fact that in real life Dan Aykroyd seems to thoroughly believe in this exact kind of stuff.  I love the fact that he does all this research for his movies and absolutely nobody who laughs at the funny parts, a.k.a. everybody else, ever notices.  I love all the insane character names he comes up with.  The technical jargon, the ancient pseudo-history, the monologues – all that is Dan Aykroyd.  And I love how Harold Ramis as a writer and Ivan Reitman as a director ably work with all that raw material, and are able to ground it in believability and relatability. Throw in Bill Murray, always the most charming of the great crying-on-the-inside clowns, and you have an unbeatable, unrepeatable chemistry.

And that’s why we all love this movie so damn much.

Note: This piece is the first one I ever wrote for the internet. I’m reposting it because this year is the thirtieth anniversary of GHOSTBUSTERS, and the movie has been playing all over the place, and this piece remains is as close as I’ve ever gotten to explaining why this movie looms so large on my cerebral landscape. Also, you know, I’m a New Yorker and it’s unquestionably one of the greatest New York movies ever made.