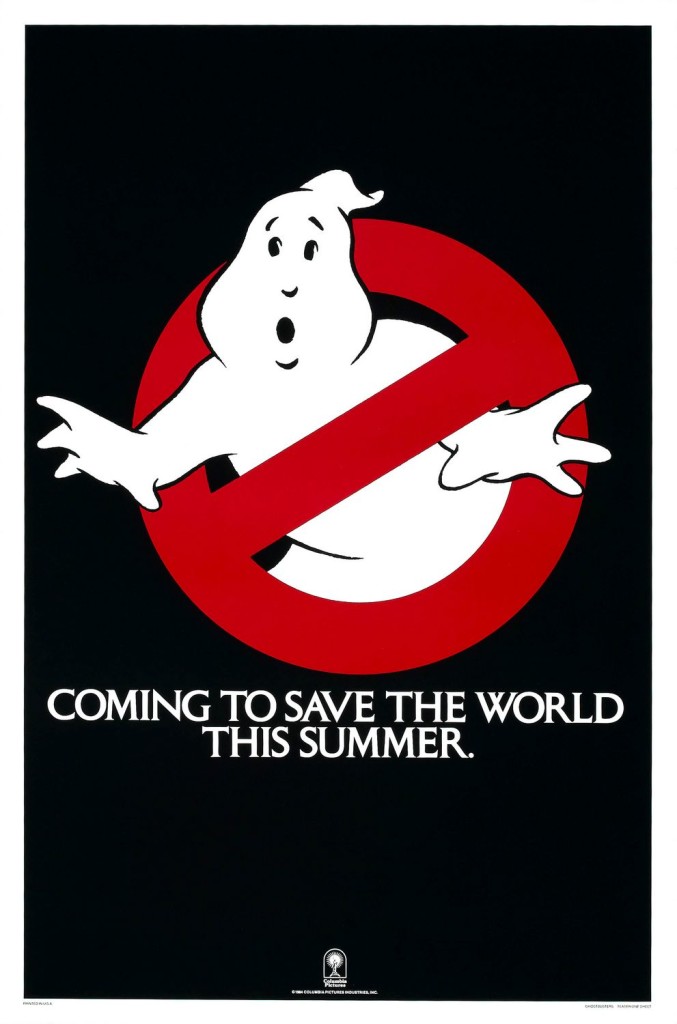 By now, if you are the type who keeps up on such developments, you are probably aware of the recent news that Paul Feig will be co-writing a new GHOSTBUSTERS movie with Katie Dippold. Paul Feig will also direct, and the primary cast, yet to be announced, will be made up entirely of women. Katie Dippold wrote for Parks & Recreation and she wrote THE HEAT, an action comedy which starred Sandra Bullock and Melissa McCarthy. In addition to THE HEAT, Paul Feig directed BRIDESMAIDS and a ton of TV including The Office and Arrested Development. With Judd Apatow, he created Freaks & Geeks, the one-season TV classic which is one of the better things to have happened in the past twenty years.

There, that’s all the exposition.

Because I talk about GHOSTBUSTERS the way most movie geeks talk about STAR WARS, more people than I ever expected have asked me how I feel about this news. (I also talk a whole lot about Batman, but we’re not even going to touch the subject of Gotham here.)

The first GHOSTBUSTERS movie is a set-in-stone solid-gold classic in my eyes; I have spent most of my life putting it forward as a near-perfect movie and I will go to my grave doing the same, and if there is an after-life then I will be back haunting folks with a similar message. The only movie I could name that is remotely as funny while also having genuine scares is EVIL DEAD 2, but GHOSTBUSTERS works on a far more universally crowd-pleasing frequency. It’s perfectly cast, timelessly shot, and impeccably scored, and it’s one of the greatest New York movies ever made. I also have tempered yet highly positive feelings about GHOSTBUSTERS II, which is a slightly less popular opinion. The first GHOSTBUSTERS is the one movie I have seen more than any other; I have it committed to memory; I know it backwards and forwards. GHOSTBUSTERS II is a different relationship. I haven’t seen it in several years, but I still take kindly to it, and while I objectively see its flaws, I prefer to disregard them in favor of the stuff I liked. That’s the pertinent corollary here: GHOSTBUSTERS II taught me that there can be no repeating the magic of its predecessor.

The great movies have a very specific, almost tangible alchemy to them. GHOSTBUSTERS isn’t GHOSTBUSTERS without Bill Murray, Harold Ramis, Dan Aykroyd, Ernie Hudson, Rick Moranis, and Sigourney Weaver (among many other wonderful actors) on screen, Ivan Reitman directing (and shepherding the script process along), Harold Ramis and Dan Aykroyd writing, Elmer Bernstein scoring, László Kovács shooting, the energy of Bill Murray and Dan Aykroyd coming off their legendary runs on the epochal seasons of Saturday Night Live and firing up the city itself to participate in the unique New York-ness of the finished film, the epic scope and preposterous budget dedicated to a story that at the time only had its precedent in goofy old-Hollywood romps like ABBOTT & COSTELLO MEET FRANKENSTEIN — there are so many elements that conspired to produce the unique film that resulted. Clearly, too many variations on the key ingredients prevented the replication of the original’s brilliance. GHOSTBUSTERS II wrangled many of the principals back but the timing was off and the reasons for being weren’t the same. I liked GHOSTBUSTERS II more than most people did, but its very existence cemented the fact that I just plain didn’t need another GHOSTBUSTERS film after that. I’ll always have the original, and it didn’t leave me with any burning questions I needed to see answered. That first film is a near-perfect experience (I’ll never understand why they left the “ghost head” sequence in there) and I can revisit it any time I want, thanks to VHS/DVD/Blu-Ray/repertory screenings.

So I was never behind the idea of a GHOSTBUSTERS 3. I know how badly many fans wanted one — almost as badly as Dan Aykroyd does — but I could never share that desire. For what? The only reason would be nostalgia, and that’s never been an instinct that motivates me. If you’re a true fan of these characters, it would take more than just seeing them again to roll your burrito. There’s no storytelling reason for a third film to exist: GHOSTBUSTERS II itself shows us that the characters would have naturally dispersed. In the opening sequences of that movie (its best scenes, in my opinion), there is no longer funding for a Ghostbusters business, there are no longer ghosts to catch, and the fallout from the events of the first film have pushed the characters away from each other. But let’s assume that after the end of GHOSTBUSTERS II, the group is back together and back in business again. Maybe that even continues for a while. We can imagine that, if we want. What’s the shelf-life on our imagination? How far do we want to run out this string? Would all four of these guys still be working as Ghostbusters into their sixties?

I don’t expect GHOSTBUSTERS fans to think like writers, but these characters are so strongly defined that it isn’t hard to project where they’d be in 2014. Sure, it makes sense that Stantz (Dan Aykroyd) and Zeddemore (Ernie Hudson) would still be involved in the racket somehow — those are the blue-collar guys. Ray is the lifer and Winston will be there as long as there’s a good dental plan. Maybe they’ve even got Louis Tully (Rick Moranis) on staff handling the finances. But Spengler (Harold Ramis) would surely have returned to academia by now, and Venkman (Bill Murray) would’ve drummed up another hustle or thirteen. It doesn’t make sense that those two characters in particular would still suit up; it wouldn’t feel right. It wouldn’t look right, either: Part of the charm of the Ghostbusters costumes is their drabness — this isn’t the Batsuit; these guys didn’t look cool even when they were on top of the world — but with older men in them it’d have an unintended air of sadness. My point is that people who wanted a GHOSTBUSTERS 3 don’t even think rationally about what they’re asking for.

Of course, this conversation became redundant with the loss this year of Harold Ramis, bar none one of the great American comedy writers. GHOSTBUSTERS II had Harold Ramis and it still wasn’t as good as GHOSTBUSTERS — what chance could a GHOSTBUSTERS sequel have without him? If you don’t have Harold Ramis on hand, you’re best off not revisiting these characters. If we’re going to keep this property alive, a reboot is the only sensible way to do it. That way Dan Aykroyd can be happy that his concept continues. That way Bill Murray can be spared the endless questions about whether or not he’ll be appearing in it. (I’ve been in a room when some hump asked him about GHOSTBUSTERS 3, and my God, it looked like a level of Hell no one would envy.) I’d like to see Ernie Hudson involved in some way, because the man apparently doesn’t age, but we can get to that in a minute.

So long story short, one reason I love the idea of an all-female GHOSTBUSTERS is that it has (seemingly) killed the talk about GHOSTBUSTERS 3.

The other reason is that I would have loved the idea anyway. As an early adopter of the idea of “she-boots” and “she-quels” and “she-makes”, it’s right up my alley. Here is a piece I wrote advocating for the casting of the inevitable ESCAPE FROM NEW YORK remake to go all-female. I think if you go back to 2011 or so on my Twitter timeline, you’ll find me talking about other ideas for “she-makes.” One idea I had was for Sofia Vergara to play the Arnold role in a new PREDATOR. As is usually the case with me, I was only half-kidding. (It’d be awesome.) The fact that Sony is planning an all-female version of GHOSTBUSTERS, I will have to admit, is a validation to me.

An all-female version of GHOSTBUSTERS is an outside-the-box option. It’s creative, not business as usual. It’s a canny reading of the zeitgeist, riding the wave of female-friendly genre entertainment and anticipating what will hopefully be plenty more. It’s a slyly anti-establishment volley from inside the halls of commerce, which I venture to guess is something Harold Ramis would have appreciated.

If you love women or if you are one, the idea is exciting. It sets the imagination running. That’s what GHOSTBUSTERS did for me as a kid; that’s what it does for me now to imagine which ladies I’d like to see inherit the electric torch. (Here’s one to start: Regina Hall. Make her Winston’s daughter if need be. After being the only person worth watching in SCARY MOVIEs 1-4, she’s got the skills the franchise needs.)

It seems to me GHOSTBUSTERS is such a classic guy’s movie — though loved by plenty of women too — that the inversion is in itself smart and funny. There’s room for a revisionist take, if that’s the way they go. Sigourney Weaver is one of the most awesomely powerful female screen icons there is, but it’s true she doesn’t get as much to do in GHOSTBUSTERS, besides coming off as one of the few real adults in the story. In the end, she’s still a damsel in distress, though that fact is amusingly mollified by the fact that Rick Moranis is also a damsel in distress. People drive Bill Murray crazy begging him to come back to GHOSTBUSTERS, but maybe one of the calls Paul Feig can make is to Sigourney Weaver. Think about that for a minute.

There’s one more thing. I have a niece who just turned seven. Currently she loves only two movies: FROZEN, and GHOSTBUSTERS. She’s in a zone where she doesn’t even care to watch any other movies, but she’ll watch those two. One of them is an obvious choice for her demographic; the other is encouragingly unexpected. Would she run to see a new GHOSTBUSTERS movie? She would. Would she love a GHOSTBUSTERS movie that much more if the main characters were ladies? I believe she would.

Why do I support an all-female GHOSTBUSTERS? Easy: It isn’t even about me.

I already have a GHOSTBUSTERS movie I love. I’m not greedy. I’m a grown man. I still love the things I’ve always loved, but (to the contrary of the length of this column)  I have plenty of diverse interests. If the new GHOSTBUSTERS is enjoyable for me, that’s just gravy. But I don’t need it to be. I’d rather it be enjoyable first for female people, and especially for young female people. It tickles me to think of the possibility that scores of little girls, like my niece and different than her, will grow up loving a GHOSTBUSTERS movie as much as I loved the first GHOSTBUSTERS movie. That’s a whole lot of love. That’s good for the world.