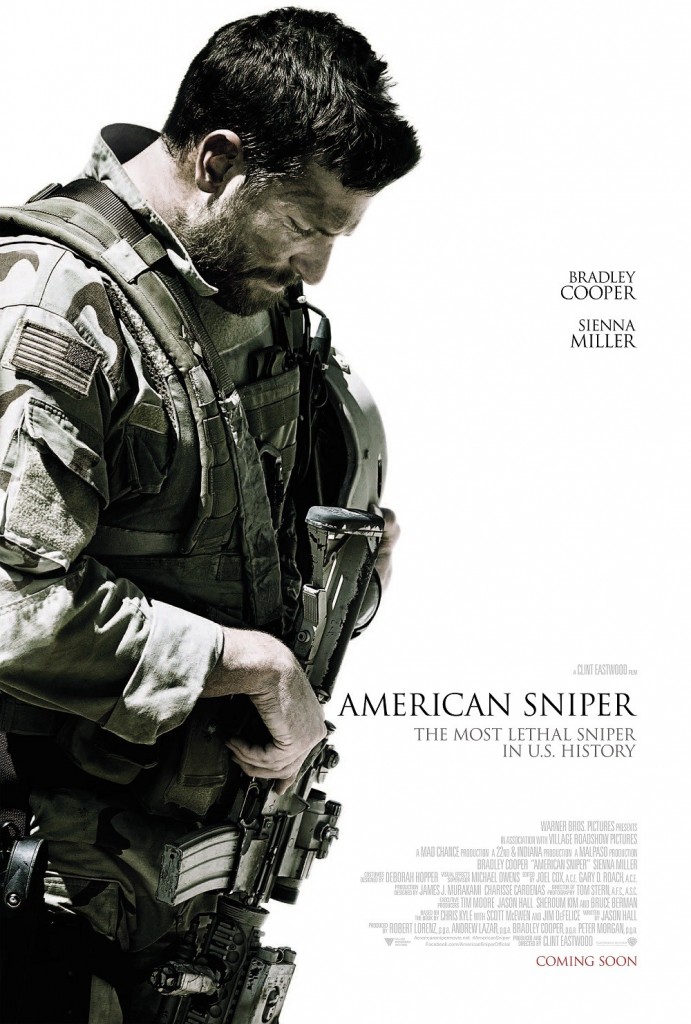 AMERICAN SNIPER was released to DVD and Blu-Ray this past Tuesday. It’s worth revisiting now, over Memorial Day weekend. Here’s what I wrote about it in my weekly new-release column:

Maybe this strikes you as an odd choice for my pick of the week, maybe not. It would be understandable if it did. This is probably the most misunderstood movie of the decade so far. Some hasty-to-judge dummies on the left, predictably, interpreted the movie as a bloodthirsty, simplistic, imperialistic screed. Some hastier-to-judge dummies on the right, even more predictably, loved it for that same reason. They’re all way off the mark.

Having seen nearly all of Clint Eastwood’s films to date as director, producer, and star — just a few more to go — I can assure you that his politics and his films are not as simple as the mindsets of the talking heads on either side of the divide. My fairly educated sense of the man through his work is that Clint loves to tweak the lefties, who can get way too serious and self-important, while he also attempts to Trojan-horse some complicated ideas into the uncomplicated worldviews of the righties. And that’s what AMERICAN SNIPER is: a thought grenade tossed into a messy briar patch of monomaniacal rhetoric. If Clint had wanted to tell a straight-up pro-war pro-gun go-America-go tale, there would be plenty of easier roads into that story. Chris Kyle, a talented killer who tallied up an unprecedented amount of enemy kills overseas only to be shot dead on American soil by a fellow veteran, represents a more complicated figure than, say, the inarguable white knights of 2006’s FLAGS OF OUR FATHERS. Kyle’s autobiography was a best-seller, largely among those Americans who are predisposed to calling him a hero, which makes its adaptation the perfect Trojan horse with which to sneak in some crucial concepts.

For all the talk about how the film supposedly favors Chris Kyle’s gung-ho disposition, his enthusiasm for sniping, his black-and-white morality, I don’t think I’ve seen another mainstream star-fronted feature since 2009’s BROTHERS as torn about the direction of modern warfare and as interested in the effect of the war on veterans, both physically and psychically. American soldiers have been fighting and risking their lives in military operations in the Middle East for over a decade now, which means many are starting to come home, with physical and mental traumas and not nearly enough financial and psychological support. There can be no more pressing issue, in my mind, than tending to the needs of our veterans. There will always be loudmouths out there to misinterpret a text and to loudly excoriate what they don’t understand. But some people will be reached, a few of them even in a position to do something good. Whatever flaws AMERICAN SNIPER may have, it does convey this most pressing message at a time it needs to be conveyed.

But AMERICAN SNIPER doesn’t even have as many flaws as some would argue. Aside from the obviously fake baby in some of the domestic scenes, which is an indefensible choice, the best of Eastwood’s film-making ability is on peak display here. Even as a committed devotee, I can admit when some of Clint’s movies are slack on the pacing — this one is not. Both in its storytelling choices and in its editing decisions, AMERICAN SNIPER moves at a clip most modern movies would do well to study. The darker palette favored by late-period Eastwood DP Tom Stern casts a noticeable pall over a supposed black-and-white tale of heroism or villainy. The movie looks pretty damn moody for an act of jingoism, if that’s what it is (which it isn’t.)

Longtime Eastwood editor Joel Cox and more recent collaborator Gary Roach abet the director in amping up the pace of AMERICAN SNIPER to levels almost unprecedented in the man’s filmography. (This, by the way, finally provides me with an answer for why Eastwood and company took on a musical right before taking on this project: They were honing their editing chops. Oh yeah, and while I’m at it — JERSEY BOYS is better than you may have heard too.) The efficiency of the many quick early scenes of AMERICAN SNIPER, sketching out the life and ethical development and military training and geographical progression of its protagonist, let alone the striking, disorienting yet smartly-crafted sandstorm siege late in the film, are so clearly composed and briskly deployed that I almost wondered if they could possibly be the work of an eighty-something-year-old man not necessarily known for his brisk visuals. But Clint did make this movie, and it’s strong and striking even by the highest standards of the man who made THE OUTLAW JOSEY WALES, UNFORGIVEN, BIRD, and LETTERS FROM IWO JIMA, so I’d invite the more vocal critics to take another look and reconsider, if not for the thematic reasons than at least for virtue of craft.

Buy AMERICAN SNIPER through us, if you can: