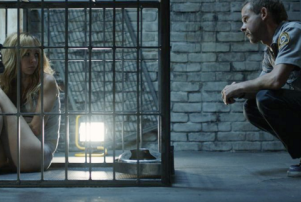 Seth (Dominic Monaghan) is a lonely man working at an animal shelter when he bumps into Holly (Ksenia Solo) one day on the bus. They went to high school together and Seth remembers her, although she clearly doesn’t remember him. He starts to follow her around and following a run-in with her boyfriend, Seth kidnaps Holly and locks her in a cage in a disused tunnel under the animal shelter. But the situation isn’t quite what it seems, and soon the two are engaged in a psychological battle for control. PET starts off in some deeply familiar territory, with Seth as the kind of “nice guy” who thinks locking a woman in a cage is a reasonable thing to do. Writer Jeremy Slater’s screenplay plays with upending the audience’s expectations, but this is still the kind of thing that would have played better as a cheap drive-in exploitation movie made in the 1970s. In 2016, it’s damn near impossible to make a guy who kidnaps a woman a sympathetic protagonist regardless of his motives. 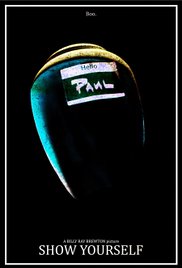 Following the death of his friend Paul (Clancy McCartney), actor Travis (Ben Hethcoat) travels to the cabin where they used to camp to scatter Paul’s ashes. It’s the off season, so Travis is completely alone to grieve. Well, not completely: he has his cell phone and laptop, so he stays in touch with Daniel (Stephen Cone), the director of his next film project, his friend Lane (Barak Hardley), his brother Adam (David McElwee), and his girlfriend Nikki (Corsica Wilson). What should have taken Travis an afternoon stretches into days as Travis tries to confront the truth about his relationship with Paul, and the longer he stays the more it appears someone or something is present with him in the woods. SHOW YOURSELF is a low-key dramatic horror film, heavy on the drama. Ben Hethcoat has to do much of the heavy lifting here as one of the only three actors ever seen on screen directly (all the others are only ever shown on the laptop or cell phone screen), and he delivers a solid lead performance. The pacing of the film is a little slack in the second half, but writer/director Billy Ray Brewton has created a unique take on the “cabin in the woods” and “haunted house” movie that is well worth seeking out for horror fans looking for something different. 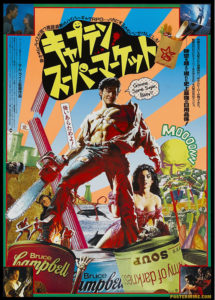 Doug Benson and Bruce Campbell also performed a Movie Interruption for ARMY OF DARKNESS this evening, with a surprise screening of the first episode of the second season of ASH VS. EVIL DEAD following directly after. This was a riot to see in a packed theater full of EVIL DEAD fans, although its last-minute addition did push the timeline for the rest of the evening back a little. SHOW YOURSELF was scheduled to start at 10:00, but instead started around 10:45, so the midnight screening of FROM BEYOND started closer to 12:30.

As much as I love that movie, I had to tag out so I could get up early and prep for a full slate of screenings today including Chicago premieres of ABBATOIR (with Darren Lyn Bousman), BEYOND THE GATES (with Barbara Crampton), I AM NOT A SERIAL KILLER, and THE GREASY STRANGLER, along with the world premiere of FOUND FOOTAGE 3D and a special 30th anniversary screening of THE MONSTER SQUAD with Fred Dekker and stars Andre Gower and Ryan Lambert.