Home  ⁄  The Wire  ⁄  From The Beginning, ROCKY HORROR Was For Everybody 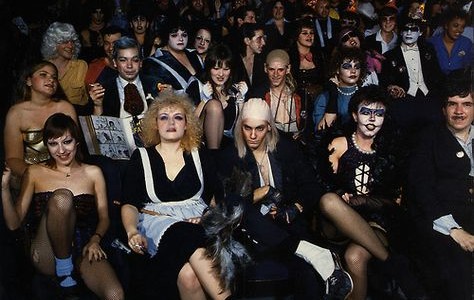 I had it pretty good growing up: no trauma, no tragedy, good friends, and parents that understood my oddball obsessions. When I was 17 years old, mom let me borrow the minivan to take myself, my younger sister, and a few friends to a midnight screening of THE ROCKY HORROR PICTURE SHOW on the other end of the city. In Chicago, the film played every Saturday night at the old 400 Theater in Rogers Park on Chicago’s far north side. These days, ROCKY generally plays in the local art house theater, where squirt guns and rice are verboten. But even in the ‘90s, the only places that let you throw toast in the air were the worst theaters in town. Those nights of going to see ROCKY (and even performing as Eddie for a spell with Chicago’s Midnight Madness cast) remain some of my fondest memories, and are the closest I ever came to attending an actual grindhouse theater. As a fan of horror movies, sci-fi, and rock ‘n’ roll with a burgeoning interest in kink, ROCKY HORROR was my destiny. Before those midnight screenings, but after years of reading about the cult of ROCKY, I finally caught a screening of it on FX in 1994. The film became an obsession for me in the mid-90s and was my gateway to midnight movies, punk rock, sexuality, and that contrarian sense of defiance that I carry with me to this day…for better or worse.

The ‘90s alternarock and grunge boom never interested me. Maybe I wasn’t that angry, or maybe I’ve just been a contrarian my whole life. I can’t help it. And so I sought out the alternative to the alternative, the stuff that even the corporate “weirdos” in their J.C. Penney flannels and Doc Martens thought was strange. At that time, ROCKY HORROR was a beacon in a world where punk was going mainstream: Despite having a successful 15th-anniversary debut on home video and airing during primetime on Fox in the early ‘90s, ROCKY HORROR in 1994 still retained its cult edge. And I couldn’t get enough of it. I collected every cast album I could find, from the original London recording to possibly my favorite. LA’s fabulous Roxy cast. I pored over fan club president Sal Piro’s Creatures Of The Night: The Rocky Horror Picture Show Experience, which featured local cast photos from around the world and told the stories of the people that populated the cult, dreaming of a day when I’d get to shout “And God said, let there be lips!” alongside a roomful of analogous weirdos. It was the halcyon days of the internet, and I scoured Prodigy message boards for any information on the rumored deleted scenes: “Once In While,” Brad’s “Over At The Frankenstein Place” verse, or the infamous “Brad/Riff-Raff buttfuck scene,” which was a meme before memes were a thing in the rec.arts.rocky-horror newsgroup.

I was drawn to ROCKY HORROR’s kinkiness. From the mind of creator Richard O’Brien, the original 1973 ROCKY HORROR production in London skewered the square fifties with glammy, androgynous ‘70s sexuality built out of the fallout of the sexual revolution and “free love” movement. The film adaptation cemented those indelible images into my mind: Little Nell in her floorshow outfit, Patricia Quinn in a maid’s outfit and black nylons—so many black nylons—Susan Sarandon in virginal white undies, and Tim Curry, all cocky swagger in garish David Bowie-inspired makeup and a corset.  For a kid on the south side of Chicago who wasn’t even sure what it meant to be gay, ROCKY HORROR made being queer normal, even cool. I found inspiration in the film to do what you feel, dress how you want to dress, be who you want to be, to not dream it, to be it. That may not necessarily mean strutting around in platform heels and fishnets—although I certainly have. It can also be wearing a cravat, putting on some eyeliner and a suit—basically, not being perpetually clad in cargo shorts, a T-shirt, and a flannel. ROCKY HORROR is for everyone. Nowhere in the film are the identifiers “straight,” “gay,” or “bisexual” uttered. Instead, there is a pervasive openness on the subject of sex: anything goes, and sexuality is, as I always say, a sliding scale.

The cult of ROCKY HORROR has arguably outshined the film itself and has provided the blueprint for “cult cinema” to this day. Initially, a flop upon its release in the late summer of 1975, 20th Century Fox attempted screening the film at college towns before looking to the midnight circuit—which saw films like EL TOPO, PINK FLAMINGOS, and rep screenings of NIGHT OF THE LIVING DEAD become small successes—as a possible home for ROCKY. It was Tim Deegan that brought ROCKY HORROR to the Waverly Theatre in New York City’s Greenwich Village; New York City in the late ‘70s saw the rise of disco and punk rock and the Village, in particular, had been a favorite stomping ground for musicians and artists as well as ground zero for the gay liberation movement following the Stonewall riots of 1969. Deegan, an advertising executive at Fox, had been with ROCKY when record producer Lou Adler brought the project to Fox. This visionary young man convinced Fox to pony up some cash for publicity, and ROCKY HORROR had its midnight premiere on April 1st, 1976. The screening sold out and word got around. It wasn’t long before theater owners around the country began calling Fox looking to book ROCKY at their own theaters including St. Louis and Austin (Austin, has truly always been weird).

While the cult of ROCKY was kickstarted by an ad man, it took a diverse group of weirdos to unwittingly turn ROCKY horror into a worldwide phenomenon.  From the beginning, ROCKY HORROR was for everybody (well, everybody who wanted to stand in line in a freezing New York City winter to see it). White people, people of color, straight people, gay people, trans people, men, and women, boys and girls, and everyone in between were there at the beginning for ROCKY HORROR.

Waverly manager Denise Borden started playing the film’s soundtrack before midnight showings, and it wasn’t long before attendees were lip-syncing the songs in a proto-floorshow. Louis Farese, a kindergarten teacher from Staten Island, is credited with the first sign of what was to come when he shouted, “buy an umbrella, you cheap bitch” as Janet Weiss (Susan Sarandon) covered her hair from the rain with a newspaper. But it wasn’t until April of 1977 when, as rumor has it, Amy Lazurus and her friend Theresa ripped up some paper and threw it like confetti during the wedding scene, while Lori Davis tossed a deck of cards “for sorrow. Cards for pain” during “I’m Going Home.” And then, in an inspired bit of genius, a ROCKY obsessive by the name of Dori Hartley showed up at a Waverly screening of the film dressed as the one and only Dr. Frank-N-Furter. Hartley literally set the stage for the age of the shadow cast, which finds audience members acting out the film as it’s projected behind them, and inspired a generation of cosplayers (although I still don’t like that term). Thankfully Sal Piro, struggling actor and eventual fan club president, was there for all of this and documented the beginnings of the cult in his book Creatures Of The Night: The Rocky Horror Picture Show Experience. 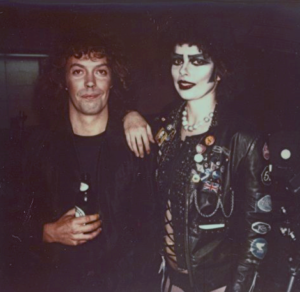 From there, ROCKY became an underground phenomenon, existing just on the edge of populist culture. It was a grassroots movement that is almost impossible to comprehend in the age of Twitter and  Facebook, playing midnight screenings all around America—including the Biograph in Chicago (The 400 would be showing it for another twenty years or so)—with shadow casts reenacting the film 52 Saturday nights out of the year. For many, the local theater became a clubhouse and Saturday night was less about watching ROCKY HORROR for the umpteenth time, and more about hanging out with friends. There was room for everybody.

In recent interviews, filmmakers Martin Scorsese and Francis Ford Coppola expressed their dislike of superhero movies, finding members of the First Church of Marvel asking the veteran filmmakers how dare they pass judgment on their favorite movies. Superhero movies are part of the dominant culture, but fans still want to treat them like a cult phenomenon, while also seeking approval from the old guard. What happened to the old notion, “don’t trust anyone over thirty?” Why would you seek a rubber stamp from the generation you’re supposed to be rebelling against? The original cult of ROCKY HORROR was a collection of outsiders, existing in tandem with the punk revolution that was going on in New York City. They were never concerned with their parents “getting it,” because they weren’t supposed to. That said, ROCKY HORROR was never about exclusivity. First-timers have always properly hazed as “virgins,” but once the sacrifice was done and the oath was taken, they were part of the dysfunctional surrogate family. Arguably, the cult of ROCKY HORROR is probably the most inclusive fandom in popular culture. 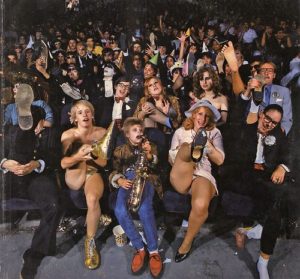 Some purists, including Lou Adler, were afraid that releasing the film to home video would be the death knell for the ROCKY cult. But instead, a whole new generation of people who maybe didn’t have access to a theater that was screening the movie, or were simply too young to go to a midnight movie, was able to discover it for themselves. ROCKY HORROR was released to home markets in November of 1990, and watching the movie without all the pomp and circumstance allows for a greater appreciation for the film itself. Retroactive critics have claimed that the cult of ROCKY is far more interesting than the film, yet when I watch it on home video sans the rowdy audience, the props, and the costumes, ROCKY holds tremendous value as cinema. The production design cribs from countless William Castle, Hammer, and Roger Corman productions, blending them with a very English glam sensibility: There’s a creepy old castle with a pink laboratory where a scientist creates a monster, but instead of a terrifying monster, it’s a gorgeous blonde hunk with a ferocious sexual appetite. ROCKY exists somewhere between parody, pastiche, and loving tribute, all the while skewering the square ‘50s that had come in vogue again as Happy Days, Laverne & Shirley, and Sha Na Na incited the nostalgia wave of the ‘70s. 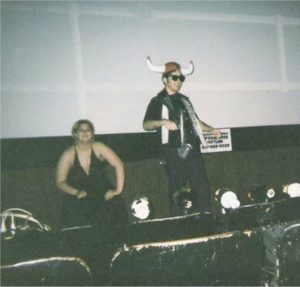 ROCKY HORROR has remained a worldwide institution, an oasis for freaks, weirdos, and even squares who just want to see what all the fuss is about. Family trips to midnight screenings have become a Halloween tradition at theaters like the Music Box in Chicago, and more than a few guests at any wedding will know how to do “The Time Warp.” A sanitized, ready for prime time production of the play aired on Fox in 2017, and seemed relatively tame in a world that’s at least a little bit more progressive than it was forty years ago. But despite countless attempts at recapturing that magic—HEDWIG AND THE ANGRY INCH, REPO:THE GENETIC OPERA, and even the 1981 sequel/equal SHOCK TREATMENT—the original ROCKY HORROR PICTURE SHOW remains a singular transgressive, subversive right of passage for weirdo teenagers, late-blooming adults, and anyone with an open mind and a sense of humor looking for a good time on Saturday night…even the squares. ROCKY HORROR still freaks out prudish Puritans, and that’s a good thing. May it never lose that power.