It’s October, which means you’ve undoubtedly heard Bobby “Boris” Pickett’s 1962 novelty smash “Monster Mash” at least a dozen times, be it intentionally or just having it attack you from “Halloween Playlist #01” set up by every store you walk in to. (Next up…“The Blob” and then “Thriller!” If you’re lucky, you’ll get Bob McFadden & Dor’s underrated “The Mummy” in there somewhere.) “Monster Mash” is like a Terrence Malick vehicle — for years now, it appears toward the end of the year, is omnipresent for a short period of time, and then vanishes into the cultural ether just as mysteriously as it arrived. And yet, despite the fact that during October you can be assured that “Monster Mash” is always being played somewhere at any time of the day, few have succumbed to the cinematic wonder that is MONSTER MASH: THE MOVIE. 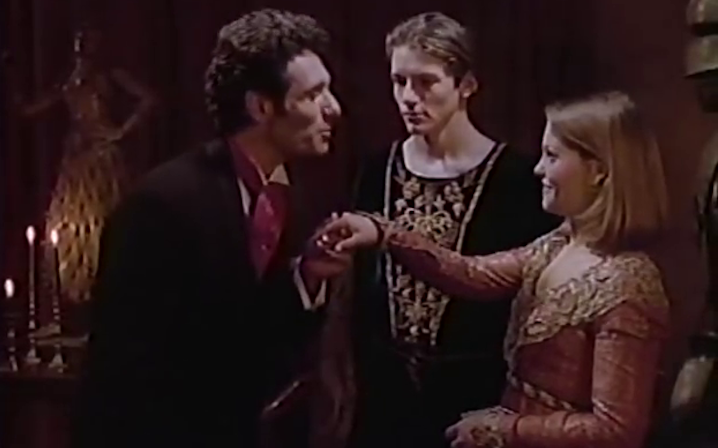 There aren’t a heck of a lot of memorable movies based on songs: YELLOW SUBMARINE and CONVOY may be two of the only cases in which the movie has even come close to having the cultural recognition of the song that inspired them. While “Copacabana,” “The Night the Lights Went Out in Georgia,” and “Ode to Billy Joe” still get radio play, the movies that were inspired by them are barely a footnote.

(THE GAMBLER film series, featuring Kenny Rogers, is another exception, of course, and we’re still waiting for Rogers to come out of retirement for a RAMBO: LAST BLOOD-esque GAMBLER VI. C’mon, Kenny, you know Bruce Boxleitner’s up for it.)

It’s not as though the idea of a movie based on “Monster Mash” came out of nowhere. The 1967 movie MAD MONSTER PARTY? is basically inspired by it (and features the real Boris Karloff instead of Pickett’s faux-ris) though it didn’t use the song. 1988 saw the inexplicable release of the Neil Patrick Harris vehicle PURPLE PEOPLE EATER, based on Sheb Wooley’s similar novelty hit, and Roger Corman got into the act with the Jim Wynorski-directed TRANSYLVANIA TWIST in 1989, marking a rare case of a song being referenced in a song inspiring a movie before the song itself did. Plus, the song and Pickett were still going strong—Pickett recorded “Monster Rap” in 1985, which isn’t as horrible as you’d think it might be.

Pickett even had the source material. In 1967, he’d co-written a spooky musical called “I’m Sorry the Bridge is Out, You’ll Have to Spend the Night” with Sheldon Allman, best known as the lyricist for the theme to George Of The Jungle. The musical wasn’t a huge success, but it’s got catchy numbers and lots of opportunity for people to dress up in campy monster costumes, so it’s not too surprising that high schools still perform it on occasion today. (There was even a sequel, “Frankenstein Unbound,” which Roger Corman did not choose to adapt when making his similarly-named film. C’mon, Roger! You had Michael Hutchence! You could have had a singing Percy Shelley!) 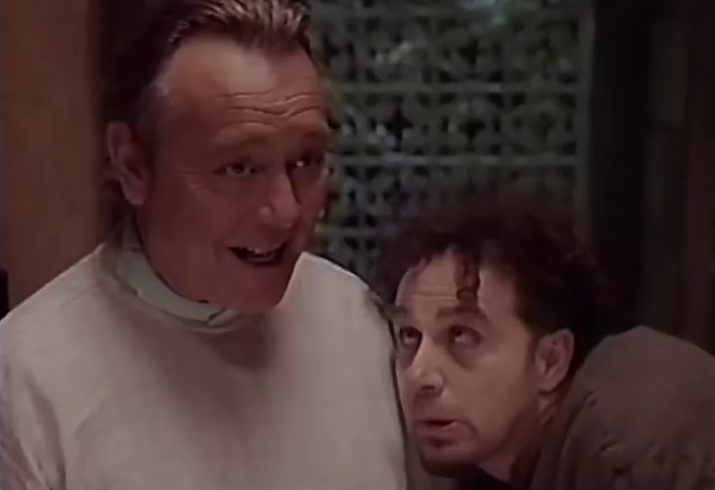 Using “I’m Sorry the Bridge is Out” as a starting point, Pickett brought on the writing/directing team of Joel Cohen and Alec Sokolow, who would hit the big time that same year with TOY STORY. Putting together one of the strangest casts in film history, adding a couple of new songs (and made sure to include “Monster Mash,” even if it didn’t make a lot of sense in context) culminated in the birth of MONSTER MASH: THE MOVIE.

Except on cable, when it showed up as FRANKENSTEIN SINGS.

The plot is your basic ROCKY HORROR, but with classic monsters in lieu of genderqueer aliens. A young couple, on their way to a Halloween party dressed as Romeo and Juliet( Full House/Fuller House‘s Candace Cameron Bure and future Teen Wolf star Ian Bohen), get stranded on a dark and stormy night and seek refuge in a nearby castle. The castle is overseen by Dr. Frankenstein (played by Pickett who explains he is “of the Hyannisport Frankensteins”) and his hunchbacked henchman, Igor (Crypt Keeper voice John Kassir), along with their many guests. There’s Dracula (Anthony Crivello), his bride (SUPERMAN II’s Sarah Douglas), a werewolf (choreographer and future HAIRSPRAY director Adam Shankman), his mother (Mink Stole!), and a trio of vampettes that provide background vocals for musical numbers. An Elvis mummy and his manager (Jimmie Walker, introduced with a music cue of the Meters’ “Cissy Strut,” uncredited) also shows up, as well as Frankenstein’s monster, played by former American Gladiator, Malibu (aka Deron McBee). 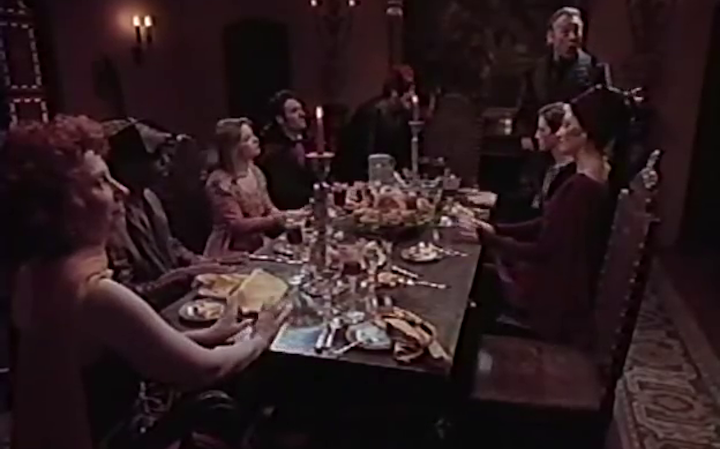 (Yes, it’s a monster movie musical from the writers of TOY STORY starring Candace Cameron Bure, Jimmie Walker, an American Gladiator, the voice of The Crypt Keeper, a future werewolf heartthrob, Mink Stole, an actor playing mummified Elvis whose only other film credit is ALSO as Elvis in MUNCHIE STRIKES BACK, and Ursa from SUPERMAN II. How this isn’t a bigger cult curiosity, I have no idea.)

The rest of the film consists of the various monster factions trying to gain usage of the young lovers’ bodies for a variety of reasons (sexual or brain-related) and our heroes cluelessly trying to get away. The vampire and his bride want their bodies fore vampire stuff, Frankenstein wants to implant the boy’s brain into his monster, the Elvis mummy needs a virgin sacrifice and Mink Stole wants her son to start dating in order to cure him. It’s all up to our hapless pair to figure out what’s happening and get out before they become various types of meat by-product.

Like the song itself, MONSTER MASH: THE MOVIE is clearly geared for kids, even if there’s a few bawdy jokes thrown in here and there. (“She’s also a count, but she spells it differently.”) There’s also a surprising number of gay jokes, but none of them are offensive, so I’ll allow it. Save for a few awkward pop culture references (the Bill Cosby joke hasn’t aged well, and it’s really puzzling what a kid would have gotten out of an offhand reference to IRONWEED), the jokes are all older than the song the movie is based on, with puns that would have caused Bruce Vilanch to be scrambling for his pen. 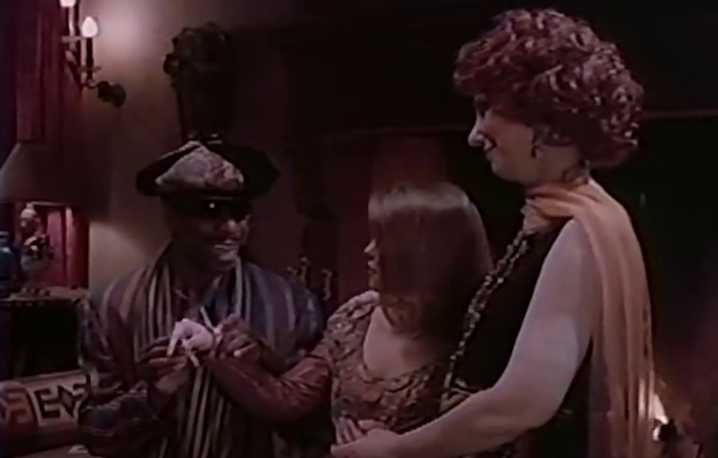 On the plus side, the musical numbers are solid, even if the the ballady addition “On a Night Like This” sticks out like a sore thumb. Crivello’s Dracula song is entertaining, as is the “Bridge is Out” number that sets up the film. Kassir essentially reused a lot of the mannerisms he uses here a few years later in REEFER MADNESS: THE MUSICAL, and is clearly having a good time. You just kind of wish there were more of these numbers, and fewer sequences about seducing the leads, who are both too bland and too self-aware of the goofiness of the premise to hold much of a comedic center.

MONSTER MASH: THE MOVIE ends up being perfectly watchable, even if I doubt the kids of 2019 would have any real interest in a movie with Wolfman Jack impersonations and references to QVC and Soon-Yi Previn. It’s also a strangely claustrophobic film, with way too many medium shots and a distinct lack of any effort to make a castle look like more than a bunch of nicely-carpeted rooms in an apartment lit by candles. (The VHS mentions that it’s “modified from its original version,” so it was clearly shot in a different aspect ratio. Help us, Vinegar Syndrome, we beseech you!) 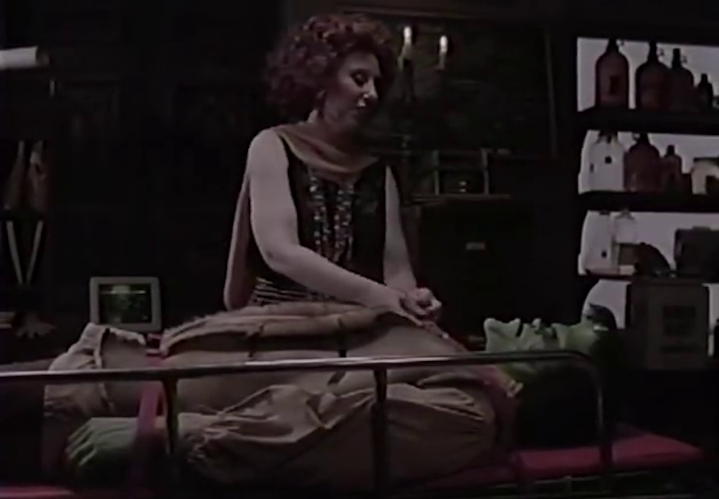 I can’t hate any movie that gives me Mink Stole singing about her werewolf son, though, and MONSTER MASH: THE MOVIE has its charms, even though it was clearly shot on a meager budget featuring whatever name performers they could get in touch with at the time. If you’ve got an elementary school-aged kid that’s excited about the idea of a monster movie that literally has “cuckoo” noises when someone gets knocked out and doesn’t mind the occasional Madonna reference, MONSTER MASH: THE MOVIE is the film for you.