“It’s my happening and it freaks me out.”

At some point in their life, everyone has been, at the very least, a tangential part of a scene. Whether you’re the charismatic party-hard ringleader, the followers indulging in their own excess, or the outsider looking in with withered judgment or jealousy, you have been part of the hedonism and cult-like mania of a loosely knit party scene. And, as seen in the movies, no scene is as decadent, deceitful, and deranged as the Hollywood one.

Movies have long portrayed Tinseltown as a hellscape of bottomless lasciviousness, a soul-warping demimonde of drug-fueled bacchanalian emptiness. Russ Meyer’s infamous BEYOND THE VALLEY OF THE DOLLS takes that idea and throws it into sex-crazed overdrive. Meyer was the notorious sexploitation kingpin known for his homages to big-breasted fierce girls like FASTER PUSSYCAT, KILL KILL, and BEYOND THE VALLEY OF THE DOLLS was his first and only shot at a major studio movie, a shot he took and ran with it, crafting a lurid X-rated pulp fantasia vision of showbiz.

BEYOND THE VALLEY OF THE DOLLS was originally intended as a sequel to VALLEY OF THE DOLLS, the 1967 unintentional camp hit based on Jacqueline Susann’s bestselling novel. Susann’s novel was an industry roman à clef about the sleazy and scandal-infected lives of a group of aspiring starlets. Mark Robson’s film was meant to be a gritty drama peeling the curtains back on the entertainment industry (“dolls” was slang for pills), but the soapy pile-up of events turned into a high-wire act of melodramatic kitsch.

BEYOND THE VALLEY OF THE DOLLS is that kitsch, powdering one of those dolls and snorting the line. Meyer, alongside first time screenwriter Roger Ebert (yes, that Roger Ebert), turned the film into a parody during early production, ramping the excess to baroque degrees as some sort of commentary on the tropes of the time. As a commentary, it doesn’t exactly work; BEYOND is a straight-faced act of lunacy that doesn’t tweak the conventions enough to classify as parody. What it is, instead, is a supreme act of “too muchness.” Part of it was in the clash of approach between Ebert’s script and Meyer’s direction; reportedly the film critic wrote the script, with Meyer, as a jab, but the helmer then directed the actors with a serious-minded solemnity that confused the stars as to whether or not the film was a goof. The result is an off-kilter piece of outré sincerity.

Meyer and Ebert’s take on Susann’s sex and drugs opus puts the Carrie Nations, an all girl rock trio (formerly known as The Kelly Affair), into the orbit of of Ronnie “Z Man” Bozell (John LaZar), a fey, slithery impresario with a collection of hippies, hedonists, and other Valley miscreants surrounding them. Z Man immediately hips to the idea of the Carrie Nations as stars, recording albums for them as their nice guy manager Harris (David Gurian) watches from afar, pining for lead singer Kelly (Dolly Reed) even as he is seduced by the succubus-like porn starlet Ashley St. Ives (Edy Williams), while the three members of the band go through their own adventures with sex, adultery, backstabbing, and drugs.

BEYOND THE VALLEY OF THE DOLLS is an entire season’s worth of soap opera plotting condensed into one bite sized package and then juiced up on a highball. It’s a nonstop collision of events, shuffling between all the players with wild abandon, spiked with lurid dollops of salacious free love sexual shenanigans. (Meyer and Ebert wanted to really make use of their X rating.) This is what sexploitation looks like on a Hollywood budget, and Meyer used his moment to shine: this is easily one of his best crafted works, with the director reveling in the Mulholland Drive opulence of his party-hearty characters, relishing every bare bosom and buttock. BEYOND has enough incident that it never gets boring, and Meyer’s frenetic editing, especially during the abundant party scenes, captures the woozy, empty, alienating feel of a scene that’s spiraling out of control.

BEYOND THE VALLEY OF THE DOLLS was a critical disaster upon its release, which may explain why Meyer went back to indie production and Ebert never wrote another script again, and in the years since, has developed a cult reputation as a “so bad it’s good” classic. Except it’s actually genuinely good. It’s certainly a heightened film, to be sure, with characters acting less like humans and more like pawns in an alien version of a daytime telenovela. But Meyer directs with swank verve, and even gets some decent performances out of his mostly unknown cast, most of all LaZar, who captures Z-Man’s bored reptilian loucheness. And it’s grounded by the music of the film. BEYOND may not have worked as half as well as it does had the Carrie Nations sounded, well, bad. While none of the actresses are actually convincing as a band—the wonky dubbing work and Reed’s always cheerfully-smiling, emotionally unblemished, cherubic countenance go a lot into causing that affect—the bluesy, lip-synced vocal work of Lynn Carey and the music writing by Stu Phillips give the Carrie Nations a gritty and appealing Jefferson Starship-like quality.

Meyer and Ebert wanted their film to have a modern, of-the-moment feel, and they succeeded. It may be dated by today’s standards, but it has a psychedelic, bohemian freak-out vibe. It’s as drugged out on its free love drop-out rock ‘n’ roll as its characters are on “dolls.” The film goes off the rails, at the end, when it turns out of nowhere, into a proto-snuff slasher film (it’s Meyer’s attempt at commenting on the Manson murders) but that’s just part and parcel of the film’s gonzo spirit. It underlines the film’s blithely colorful mod nuttiness. It’s Russ Meyer’s rock soap opera and it freaks us out. 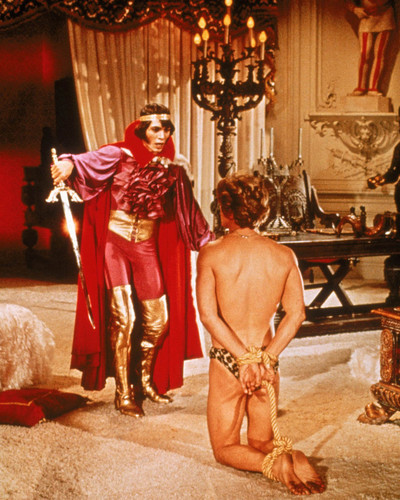