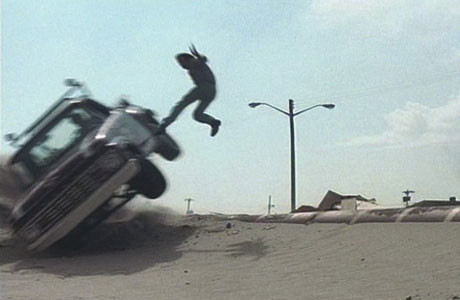 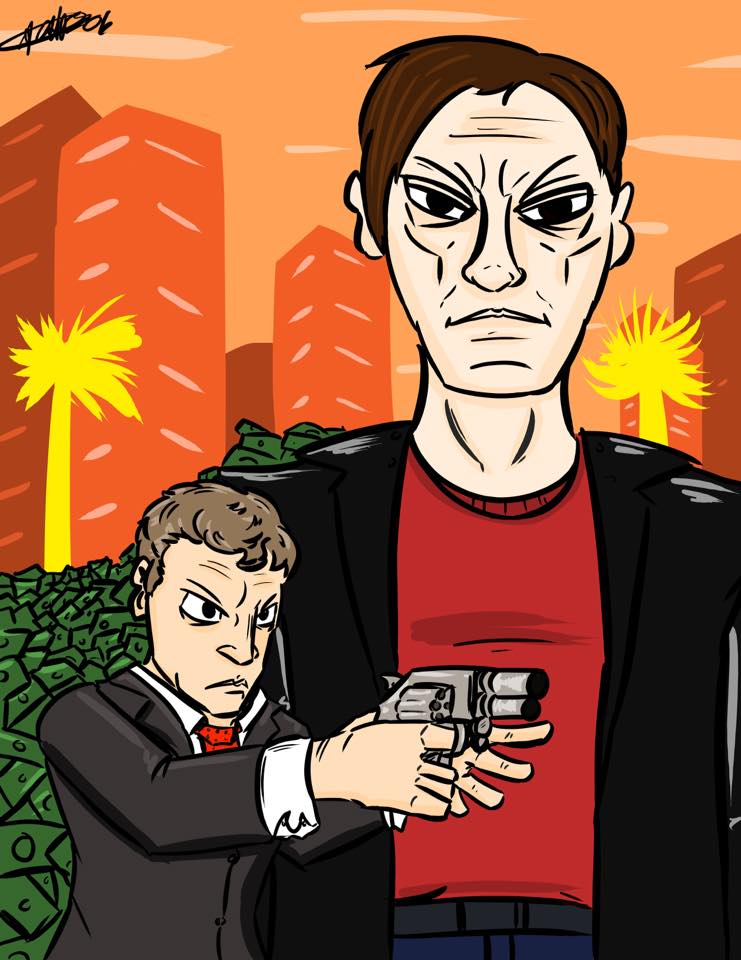 TO LIVE AND DIE IN LA hit Blu-Ray this past week. It’s great for many reasons, but one of them is that William Friedkin, who directed some of the great car-chase cinema in movie history with THE FRENCH CONNECTION, went and outdid himself. The proof’s on YouTube. If that’s not enough hot four-wheeled action for you, read on to have our crew provide you with some high-end vehicular mayhem.

RYAN CAREY:  My favorite car chase is, actually, the one in TO LIVE AND DIE IN LA, with THE FRENCH CONNECTION coming in a very close second. Nobody did ’em like Friedkin, ya know?

ANYA NOVAK:  It may be unorthodox in that it’s not a strict action film, but my all-time favorite car chase is the main one in THE BLUES BROTHERS (1980). I was always amazed to see the debris flying across the dashboard of the Bluesmobile, indicating that even the actors were actually driving the car at top speeds through the streets of Chicago. The brothers’ deadpan performance as they are chased by dozens of cop cars is still funny, and the dozen-car pileup puts the scene into over-the-top iconic status.

WENDI FREEMAN:  RONIN! The car chase set in Paris: I like the attention to detail and the smoke coming from the tires when he downshifts.

MATT WEDGE:  So many answers pop in my head for this one, but I’m feeling like a little bit of a smartass and want to highlight the satirical car chase in Robert Altman’s BREWSTER McCLOUD. An oddity even by the standards of Altman’s eclectic filmography, the film features a subplot about a serial killer being tracked by a legendary cop named “Frank Shaft.” An obvious spoof of BULLITT (released only two years before BREWSTER McCLOUD), Shaft is played by Michael Murphy doing a dead-on impression of Steve McQueen. Complete with special contact lenses to give the illusion of “piercing blue eyes,” various turtleneck and leather gun holster combinations, a muscle car, and Murphy’s self-important attitude, Altman turns the clichéd heroic supercop into a joke. Shaft is quickly revealed to be useless as a policeman, and his inability to be anything like Bullitt culminates in one of the saddest car chases in cinematic history that ends with Murphy’s cop being outraced by Shelly Duvall, stoically accepting his defeat in the most ridiculous and absurd manner possible. As a straight car chase, it is silly — abrasively so at times. As one of American cinema’s greatest loose cannons taking the piss out of a hit film, it is sublime.

ANDY VANDERBILT:  One of the more recent ones would have to be THE RAID 2: BERANDAL. It’s short and sweet, but it combines a car chase with martial arts. Also, the behind-the-scenes footage was really interesting with its depiction of how they shot the chase scene. ( I would have chosen FURY ROAD, but that’s really just one big car chase that spans the entire movie.) 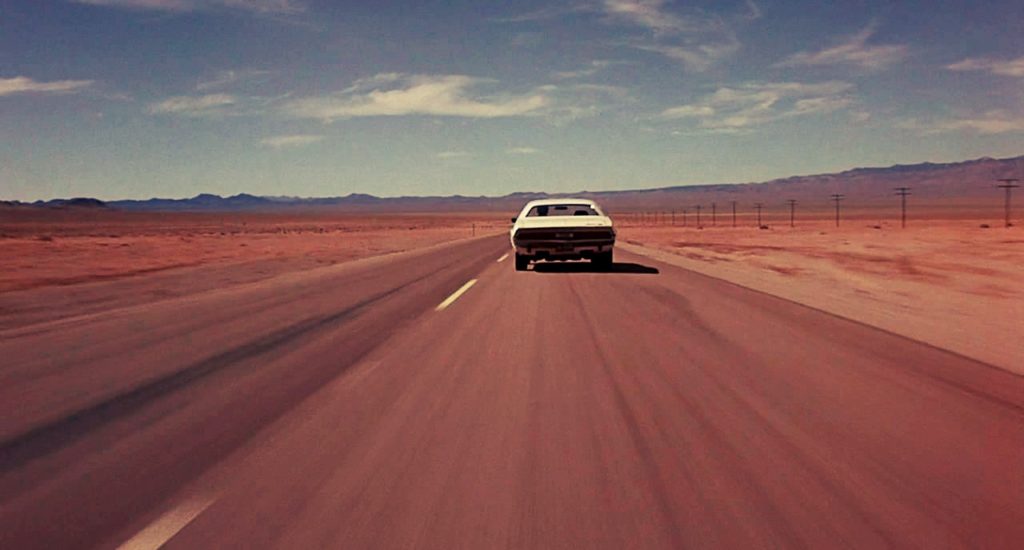 MAC BELL:  One of my all-time faves is the wild slapstick chase finale featured in W.C. Fields’s NEVER GIVE A SUCKER AN EVEN BREAK (1941). Directed by Edward Cline, a writer and director who started his career working with Chaplin and Keaton, the chase is a wonderful homage to the great silent chases featured in the old Mack Sennett Keystone Studios shorts (where the movie car chase was practically born). SUCKER‘s chase holds up today, displayng some amazing stuntwork for its time. It’s so good in fact that some of the footage was utilized in Abbott and Costello’s IN SOCIETY (1944). Grab yourself a watch if you get a chance. Chase starts at 103:46.

PATRICK SMITH:  Look, SPEED RACER has cars that can jump in such a way that their drivers are basically doing car-fu, so all other answers are redundant. I mean look at this, and tell me its not the greatest thing you’ve ever seen.

JASON COFFMAN:  I’m just going to say DEADLINE AUTO THEFT, directed by H.B. Halicki (who also directed the original GONE IN 60 SECONDS). It’s basically a hundred minutes of vehicular mayhem, and I think it may still hold the record for the most vehicles crashed in one movie. It’s a riot.

PAUL FREITAG-FEY:  Two of my favorites are from 1972’s FEAR IS THE KEY and 1976’s STRANGE SHADOWS IN AN EMPTY ROOM. The former, towards the beginning of the film, features Barry Newman on the run in a less nihilistic counterpart to his VANISHING POINT role the previous year, and the latter involves so much of late-’70s Montreal that you could almost say you’ve been there. (Even more entertainingly, the chase in SHADOWS has virtually no impact on the plot of the movie itself – you’ve got to love car chases for the sake of having car chases.)

Bonus points for the “Car Chase” scene in RETURN OF THE KILLER TOMATOES, which always cracks me up for some reason. 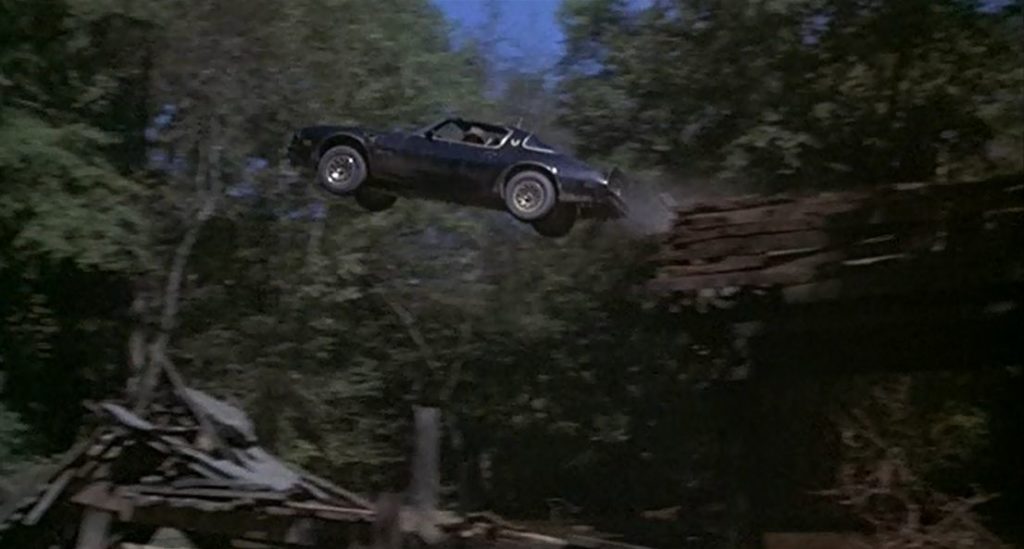 BRETT GALLMAN:  Does the entirety of SMOKEY AND THE BANDIT count?

JON ZILLA:  Thanks for the opening, amigo. Yes, SMOKEY AND THE BANDIT counts. And so does CANNONBALL RUN. And so do their sequels. And definitely don’t forget HOOPER. When it comes to questions like this one, I continue to argue for the importance of Hal Needham in American film history and even as an auteur, despite “auteur” being the kind of fancy terminology Hal Needham would’ve had little interest in.

It’s easy to advocate for the auteurist films of say, Martin Scorsese, William Friedkin, Brian De Palma, Kathryn Bigelow, Dario Argento, even outlaws like Walter Hill and John Carpenter. There’s undeniable art to be found there. It’s not so easy to defend every last frame of a Hal Needham film. They don’t much resemble cinematic art as we’ve come to identify that kind of thing. You won’t see a Hal Needham retrospective at MoMA, although you might at my house. Understand I’m not arguing that these are quote-unquote flawless films. Even his best movies have extraneous scenes, regrettable performances, crude dialogue, and sloppy editing. They’re friendly movies, but they’re also artifacts from a ruder, rowdier, hornier, less sociopolitically-sensitive era. Don’t bring your priest, your rabbi, your grandma, or any of my fellow classmates from Wesleyan.

But that disclaimer aside: Hal Needham, who became a writer and director after already establishing himself as one of the great stunt artists in Hollywood history, made some of the most tactile action scenes you’ll ever see. Those are real people driving real cars through real dangers, and the value to that isn’t found in words and thoughts, but in feelings. A Hal Needham car chase might not prompt thorough analysis in Film Comment or Sight & Sound, but it’ll make you giddy. Hal Needham didn’t need CGI to make speeding cars fly, and if he’d had the option, he would’ve done it his damn self all the same.

KEVIN MAHER:  I don’t know that I have a favorite car chase, but here’s one I just rediscovered watching Stephen King’s SILVER BULLET (1985). A one-eyed werewolf-priest uses his car to chase a 10-year-old boy in a suped-up wheelchair. Reverend Lowe punches the gas and lays into the defenseless kid, trying to knock him off a bridge into the river. The scene resembles a bull-fight, but the shock comes from seeing a preacher trying to kill a disabled kid. I respect that the filmmakers didn’t overstay their welcome with this sequence; the whole thing is barely four minutes. Stephen King wrote the screenplay (adapting his own novelette, which didn’t feature a wheelchair/car chase scene) and it’s a nice addition to the B-grade monster movie.

Another great car chase is in the horror-anthology film NIGHTMARES. There’s a segment titled “The Benediction”, which could just as easily be called “The DUEL knock-off.” Genre-film favorite Lance Henriksen plays a troubled Priest driving across the desert being stalked by an evil black Chevy with tinted windows. Henriksen gives a fine performance as a man questioning his faith while escaping a psycho-truck, but the highlight comes just moments after the Satanic vehicle disappears. Lance looks across he landscape, searching for his tormentor, when the ground rumbles and something massive burrows across the ground. The monstrous truck bursts forth from the earth, blowing Lance Henriksen’s (and the viewer’s) mind, and ushering the cheap anthology film into the arena of the absurd. It’s a remarkable and satisfying moment, as exciting as it is dumb.

Fun-fact: NIGHTMARES was made-up of four episodes of the 1981 TV series DARKROOM, but these four episodes never aired because they were deemed “too intense for television.” This DUEL copycat was directed by Joseph Sargent. A few years later Sargent would direct a JAWS knock-off, with JAWS: THE REVENGE. How fitting that his truck breaches like a shark.