But one thing all of the previous Vinegar Syndrome releases have had in common is the rather standard gender relations component – they’re all films intended for a solely heterosexual audience, save for the Walt Davis films, which were clearly just meant for an insane one. The sex depicted in them is virtually all guy/girl with some girl/girl stuff thrown in for good measure. Lacking in their catalog are any releases geared towards all-male eyes, an audience that grew quite large during the golden age of porn and one with several classics that rank among the best of the era’s hardcore cinema. 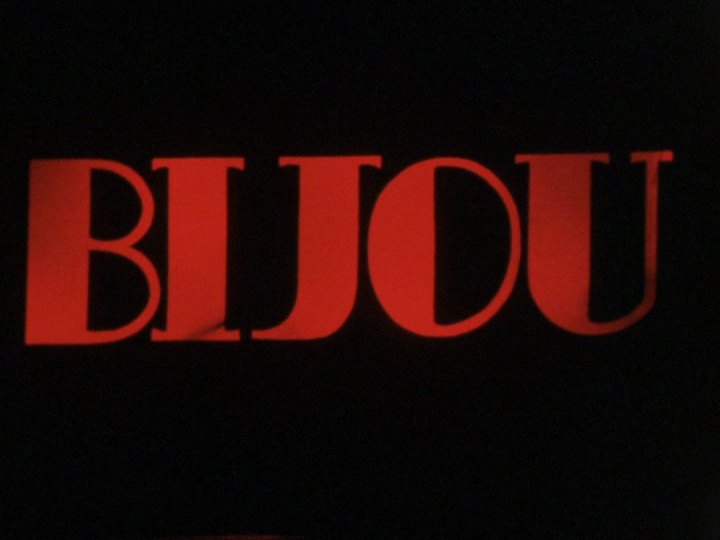 This changes with Vinegar’s release of Wakefield Poole’s BIJOU, and you couldn’t ask for a better introduction to the world of all-male adult film. As much of a beautifully-lensed, colorful fever dream that happens to be about sex than a “sex film,” BIJOU should appeal to adventurous cult film fans as a dreamy, vibrant variation of the likes of John Parker’s DEMENTIA – albeit one with a lot more man-on-man action.

The dreamlike nature of BIJOU should come as no surprise coming from Wakefield Poole, the adult auteur whose BIBLE! brought the tales of the ancient book to life in a previous (and highly recommended) Vinegar Syndrome release. BIJOU was produced a year before BIBLE!, but the look of the latter film is very evident here, with Wakefield making great use of minimalist sets to convey a mysterious nature that belies the films’ budgetary constraints.

The story of BIJOU begins on the streets of New York City, with a prolonged sequence involving three characters – the bald driver of a car, a young woman in a fur coat, and a construction worker, just off his shift, the latter our protagonist played by Ronnie Shark under the name “Bill Harrison.” After some (relatively jittery) footage following the trio on their respective paths, they finally cross when the driver hits the woman with his car, her purse flying out of her hand. The construction worker picks up the purse and runs back to his tiny apartment, a ramshackle affair that looks about a half-step above a heroin addict’s residence.

Making his way through the contents of the purse, the thief finds some money, a set of rosary beads and a mysterious invitation to an event listing an address, a time, and the word BIJOU. He also discovers some lipstick, which he idly plays with for a bit before undoing his button-fly jeans and working on his impressively ample member – a task that eventually moves to the shower. He visualizes a number of ladies as he jerks off, but when those visions turn to the woman whose purse he grabbed, he finds his climax unexpectedly interrupted. 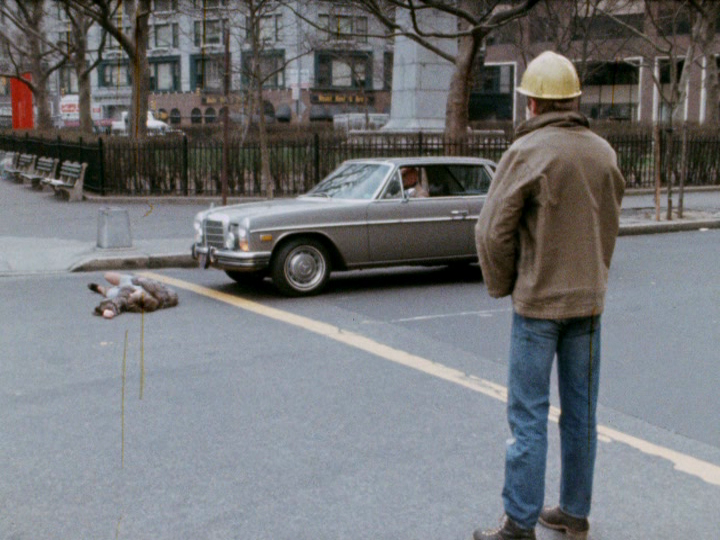 He decides to take up the invitation to the questionable venue, silently handing his ticket over to the elderly woman at the address, who looks as though she’s about to put a gypsy curse on him as she ushers him into the darkness. A neon light instructs him to take off his shoes, and he follows the instructions – a subservience similarly shown when he spots another sign telling him to remove his clothes and one he commits to throughout the film. The place itself is almost entirely black, with only unseen lighting exposing our lead. He also comes across some large, odd objects that could be either giant fruit or giant genitalia, depending on how your Freudian instincts lie.

The remainder of the film is an astonishingly well-shot cavalcade of color and flesh, as our nameless construction worker becomes physically involved with an increasing amount of men who approach him wordlessly in the near-darkness, with bright colored lighting making for a stark-yet-mesmerizing experience. The man first takes dominance over a nude person lying on the floor whose long hair makes their gender indeterminate, followed by a voyeuristic moment as he watches several men disrobe on various screens, his reaction lit by the glimmer of a projection light. The film finishes with the man lying face-up on the ground, as several men with a variety of physiques, including a whip-wielding Steve Reeves-resembling Bill Cable, ravish his and each others’ bodies in a smoke-filled, psychedelic climax in which he finally begins taking some initiative. (Though I’m amazed these guys can do as much as they can with Harrison’s cock – it’s like a damn 1.5 liter soda bottle.) 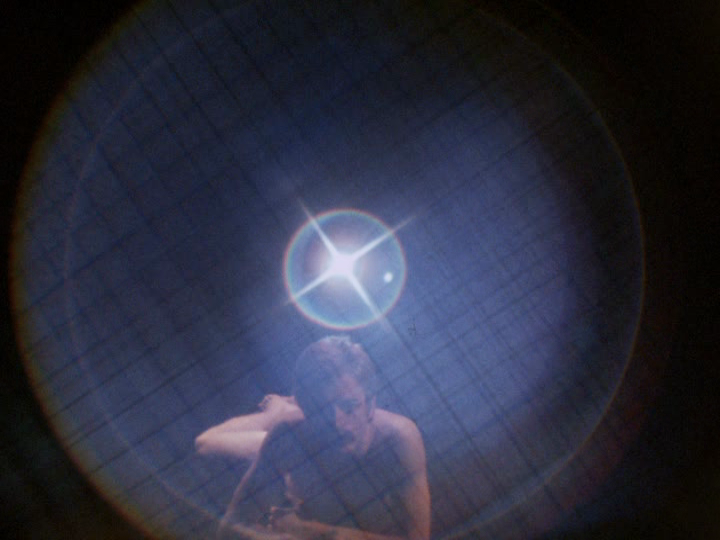 So, yeah, there’s plenty of male flesh against male flesh to be had, but BIJOU is visually intriguing enough that you don’t have to be predisposed to having gay sex to appreciate it – you just have to not be opposed to watching it. In many ways, BIJOU is the perfect way for straight audiences to have their first glimpse of gay erotica – our lead himself is less of an active participant than a (possibly guilt-charged) character along for the ride. The pictures on his apartment wall of nude ladies and his masturbation fantasies mark him as hetero-inclined, and the whole film feels less like a man immersing himself in homosexuality and more like the passing fantasy of a man idly dreaming about the “what if” idea of a less binary sexuality.

There’s a fair amount that you can interpret from the film, so it’s not too surprising that in one of the many special features, Poole reminisces about showing the film to a psychology professor and his family on Easter Sunday. (It goes surprisingly well.) The special features also include an introduction, a fine commentary track where he talks about his visual trickery and the different interpretations of the film, though there is some dead space. An archival interview with Poole from the public access show “Emerald City,” a brief talk about the film from author Linda Williams (Hard Core: Power, Pleasure and the Frenzy of the Visible) and 14 minutes of audition footage that were used in the film itself during the voyeuristic film sequence complete the extensive package. 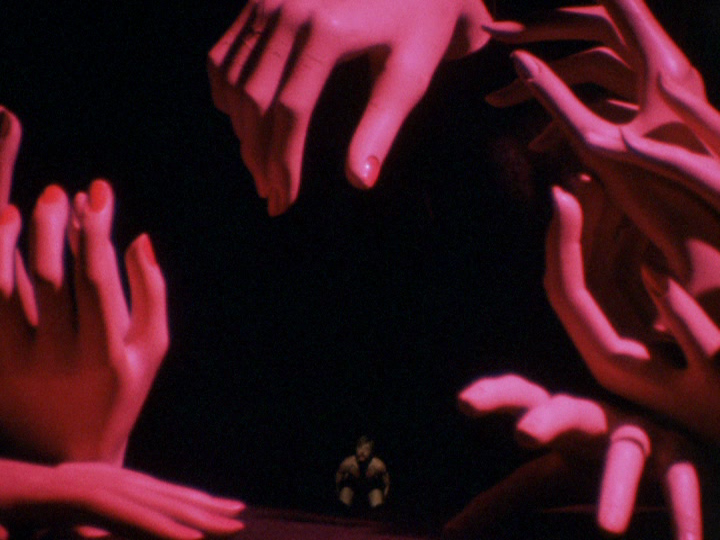 Previously released to DVD as part of “The Wakefield Poole Collection” with his previous BOYS IN THE SAND and later BOYS IN THE SAND II, Vinegar’s release culled from original 16mm elements presents a marked improvement on the transfer, and the colorful nature of the film is really allowed to pop, with the blacks finally appearing as dark as they should. (I’d love to see this on Blu-ray, but there probably isn’t much of a market – Vinegar’s taking enough of a chance with this one as it is.) While the subject matter of BIJOU may seem limited, the more open-minded cult film fan should find it a worthy flick that ranks alongside the hypnotic likes of CAFÉ FLESH in terms of sex-driven surrealism – one that brings the term “mindfuck” to a whole new level.