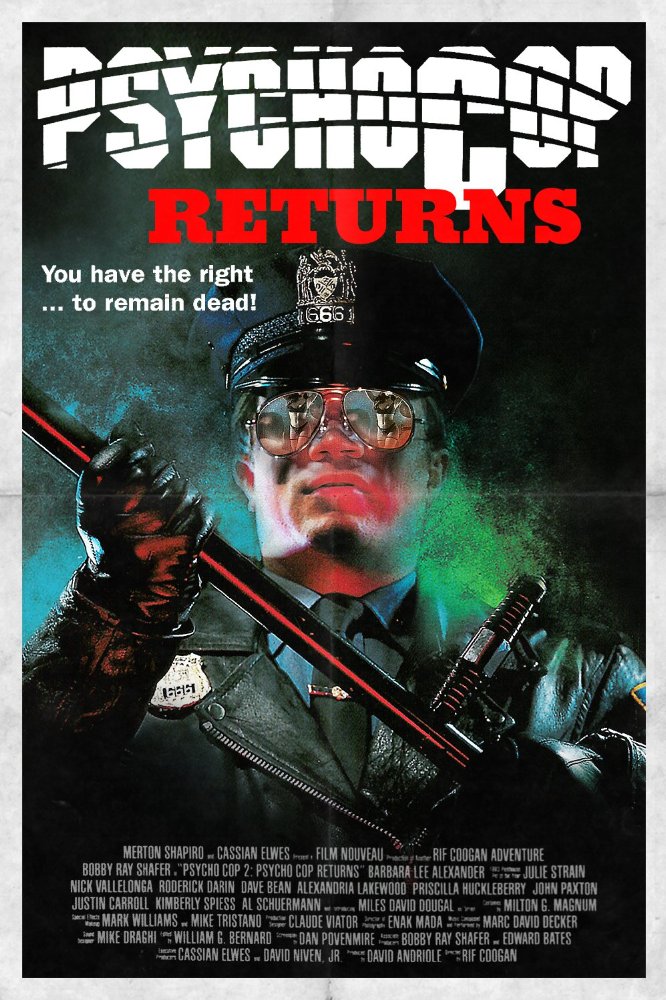 The first time I saw PSYCHO COP RETURNS (or as it was known then, PSYCHO COP 2) was on one of those late night channels that you get with your Dish Network package.Not necessarily Showtime, but maybe Showtime Extreme or something along those lines. I remember seeing it, thinking I’d get something along the lines of MANIAC COP, but I was extremely wrong (as I’m wont to be). It’s part of an unofficial sub-genre that I absolutely love which is, “People trapped in an office building/apartment building and are menaced by a horrific whatever.” So yeah, right the hell up my alley. Full disclosure: I’d never seen the original PSYCHO COP, but good lord, after this film unspooled, I’d be remiss if I didn’t track down the first film and shove it into my eye sockets as soon as humanly possible. It’s the film that seems tailor-made for USA’s Up All Night, and actually did play on that beloved staple, right alongside RETURN OF THE LIVING DEAD.

The sequel, recently released by Vinegar Syndrome, is that perfect party movie that you’d put on for your friends to just drink and have a blast with. The film takes a little while to get going, the killing doesn’t necessarily start until nearly thirty minutes in, but it’s full of legitimately engaging performances, softcore canoodling and nudity, the audience will be invested in the film by the time the unrated and goopy gore kicks in and there’s a big body count for a film that’s mostly a centralized location. Once Bobby Ray Shafer (who easily steals the film, mostly because it’s HIS film) gets down to work, it’s a fun easy ride until the credits roll. It’s a low-budget movie, shot on film that has a look to it that is charming, and the lighting gives it that basic cable look that hooks me as a lover of basic cable horror movies. The Blu-ray toes that line between making the film look clear and sparkly, but still having that DTV graininess. That’s cool as hell. Though the music is so tonally off in some scenes, it gets a little distracting, it’s appropriately horror-centric in other scenes.

Also, it’s worth mentioning that the script allows the characters to function in two separate parts. At first, the male characters are lunkheaded fratboys (save for Miles Dougal’s ‘Brian,’ who has such a goofy charm, I can’t but help find him endearing) and the women are used for the sexual appeal (save for Barbara Niven’s character, Sharon, who takes no bullshit), but once they wise up to the murders, they actually do act smarter than usual than horror characters do in situations like this. I particularly like the stairway sequence where Sharon and Joe Vickers have a standoff because of how her character doesn’t fuck around in the face of danger. Sadly, the last third is just her character running around in the endless stairwells and halls, but there’s that germ of brilliance there that puts this film above average. The script by Dan Povenmire has some genuinely funny one liners for the Psycho Cop (“You have the right to remain dead!”) and gives us what maybe the most original way that the killer is stopped: he’s beaten to death by a gang of vigilantes, which as the screenwriter mentions on the making-of is a direct parallel to the Rodney King trial.

That’s probably a great place to get to what Vinegar Syndrome is offering us on the disc. PSYCHO COP RETURNS is loaded with bonus features (at least relative to other bigger films that have zero bonus features), like the 43-minute documentary, “Habeas Corpus.” It gets just about every principal member of the cast together for their recollections on the film. What’s great about the documentary is that, despite the majority of the cast using pseudonyms, they seem to look fondly back on the film. Adam Rifkin goes into detail on why he’s called Rif Coogan (his faux nom de plume), Bobby Ray Shafer explains his acting process for the film, showing that he truly respected the role and put a hell of a lot more into it than just showing up and memorizing his lines. He created a character and stuck to it, and that’s part of the reason why the film works and is memorable. He makes Officer Joe Vickers come to life. There’s also a funny bit where screenwriter Dan Povenmire (the creator of Phineas and Ferb!) tells about a story about how Julie Strain found out he was an animator for The Simpsons and made him draw a sexually explicit comic with her and Bart Simpson. The other little featurette, “The Victims of Vickers” is a little nuts and bolts nine minute discussion of the thought process behind the special effects. It’s nice to see that Mike Tristano shows great affection for the movie and the work he does in the film, because there are some genuinely homey and fun effects in the feature.

The commentary is fairly engaging, as Adam Rifkin is a fun presence to listen to, never growing silent and cracking jokes as soon as the track starts. He explains a little further about the pseudonyms (it’s exactly why you think the cast and crew would do such a thing), spins stories about cast member and pal Miles Dougal saving his life from a drowning incident. He reveals stories about how he received protests from the crew about the exploitative nature of the film which everyone in the cast and crew were fully aware of and reveled in. There’s also a great anecdote where Rifkin tells us that famed composer Tyler Bates provided the music for the stripping scenes in the film! And yeah, the PSYCHO COP poster in the hallway? Absolutely intentional.

Overall, it’s a stellar package for a film that not too many people may heard of. Is it the greatest film ever made? No, and I think most people would agree with that, including its director. But what they would agree on, and what the director would tell you, is that it’s a film made with heart and passion that’s got one thing on its mind: to give you a good time. And it succeeds tremendously. 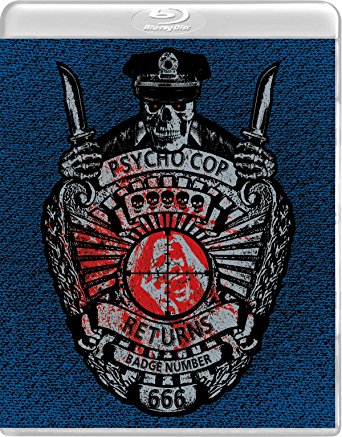