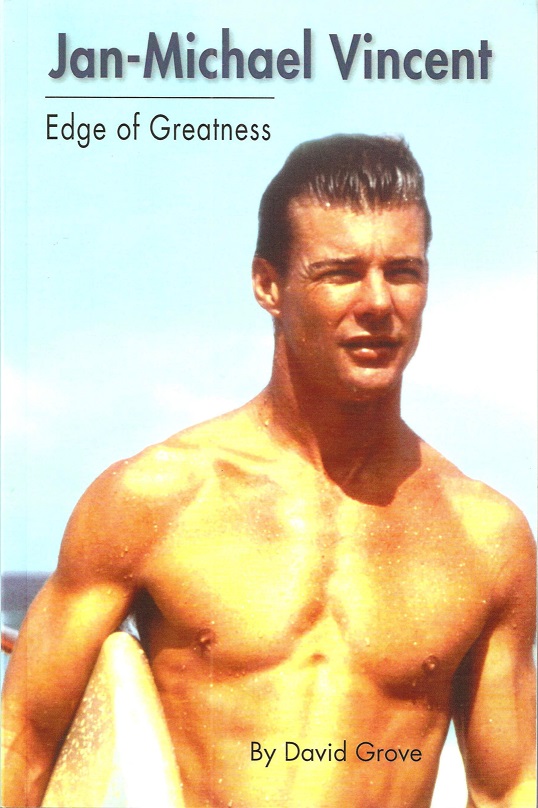 By the time I got around to hearing the name Jan-Michael Vincent, it was as the punchline to lame, easy, mean jokes. The weak-sauce premises either zoned in on his trio of first names, one of them being vaguely feminine, or more often the schadenfreude of an enviable physical specimen and, by all outside appearances, one of life’s winners being brought low by fate. But I didn’t get the jokes; they went over my head. The height of his fame preceded my own cinematic coming of age, meaning he was on the downslopes of fame long before I became aware of him.

Because he appeared in several films that are square inside my wheelhouse, I have since become more familiar with his work, and taken as a timeline, his career does present an arc — an ascent, and then an abrupt, and steep, drop-off. In the span of ten years, he went from bumping heads with the biggest movie stars of the day, in prominent action movies, to being the cranky wheelchair-bound old guy in low-rent flicks like ENEMY TERRITORY. That movie might be a fun piece of trash, but it’s a far cry from toplining a would-be Hollywood sci-fi blockbuster (DAMNATION ALLEY was produced at the same time as STAR WARS), just a decade earlier. This was a stark and savage decline.

Jan-Michael Vincent’s career was full of promise at the outset. He got plenty of attention for his appearance, but he could also act, and because he got to Hollywood during the shift from Old to New, he benefitted from the mentorship of some of the movies’ greatest male stars, from John Wayne to Robert Mitchum to Burt Reynolds and Ernest Borgnine.

In an alternate universe, Jan-Michael Vincent could have become a durable Hollywood presence in the manner of Tom Cruise, who spent the formative phase of his career smartly choosing to work with and learn from established and widely respected actors like Paul Newman, Dustin Hoffman, Robert Duvall, Jack Nicholson, and Gene Hackman. However you prefer to think about Tom Cruise now, you’d have to agree there’s a clear architecture to his ascent. Similarly, Jan-Michael Vincent ten to twenty years beforehand was on his own path to the big time, but the real-deal highlight reel never happened. He never got to have the star-maker; the TOP GUN that would make him a household name. He never got his BORN ON THE FOURTH OF JULY or his A FEW GOOD MEN; he never got his MISSION: IMPOSSIBLE type franchise, and he never got to work with auteurs like Martin Scorsese or Stanley Kubrick.

As David Grove’s book correctly and devastatingly points out, Jan-Michael Vincent made it to the edge of greatness. He was right there at the outskirts of it. He seemingly had what it took to become an A-list star in the latter decades of the 20th century, and he clearly came within shouting distance of achieving the dream. It’s the legend of Icarus all over again, only instead of arrogance and hubris, the downfall can be attributed to substance abuse and addiction, which is doubly tragic. Consider the comparative price of the missteps: Icarus only suffered for as long as it took him to drop to the ground. Jan-Michael Vincent endured for way longer than the mythical inventor’s son ever had to. 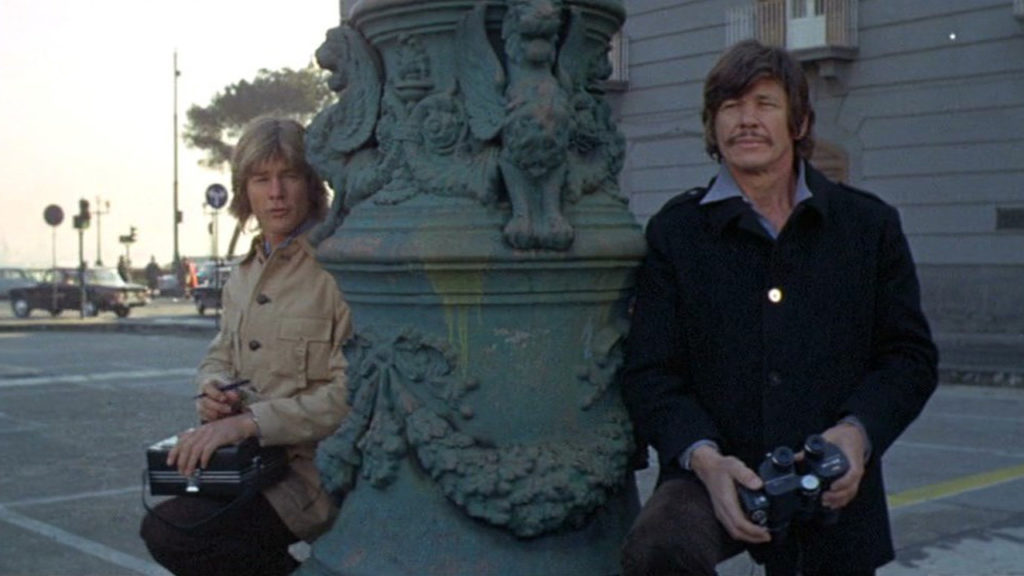 With Charles Bronson in THE MECHANIC (1972) 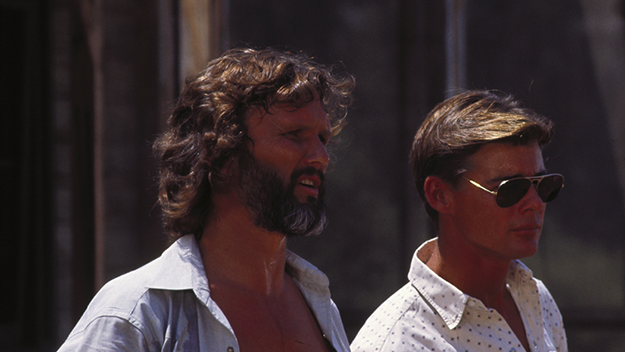 With Kris Kristofferson in VIGILANTE FORCE (1976) 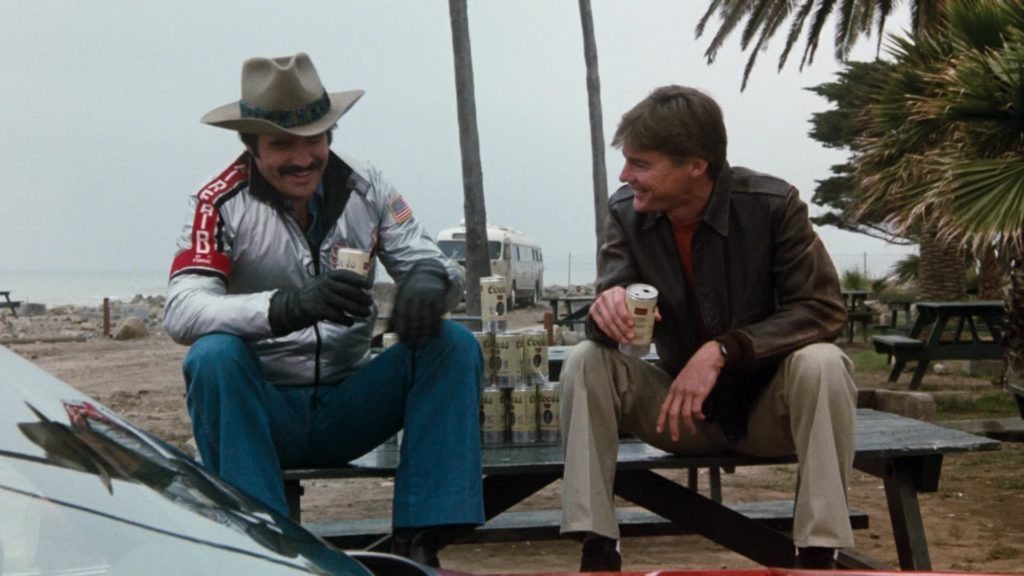 My favorite Jan-Michael Vincent movies happen to be THE MECHANIC, VIGILANTE FORCE, and HOOPER — all three of those titles can be classified both as action films, and as star vehicles for somebody else. Jan-Michael Vincent maybe wasn’t essential casting to these films — it’s easy to imagine these roles going to his contemporaries, the ascendant stars of the time that included Harrison Ford — but he was thoroughly effective in them. He provided just enough movie-star charisma to be a danger to his more famous co-stars, but not too much to eclipse them. In all three of these movies, Vincent played the up-and-comer, “the young guy,” the tentative ally to the hero but also his main competition. In THE MECHANIC he was Charles Bronson’s star pupil and then his worst enemy. In VIGILANTE FORCE he was Kris Kristofferson’s brother and then the only one who could stop him. In HOOPER he was Burt Reynolds’ main competition and then his friend. Again, in Tom Cruise terms, he would have graduated from this phase and gone on to be “the guy.” Not “the kid” or “the young guy” but “THE guy.”

That wasn’t to be.

In Edge of Greatness David Grove provides a thorough appraisal of the acting career of Jan-Michael Vincent, giving an honest and unsparing but thoughtful and sympathetic assessment of the promising highlights of Vincent’s Hollywood career, and then the terrible depths that followed. Grove personalizes the subject, noticeably choosing to refer to him in the familiar, as “Jan” rather than as “Vincent.” The tone of the prose is very much on the side of the subject, but without any cloying sentiment, and it doesn’t shy away from the darker details — although admirably, Grove fast-forwards through the accounts of drinking and drugging that almost any other biographer would reiterate at length. The chapters bookending the bulk of the account, in which the writer gets to be more creative in the presentation of the story, are particularly strong. Biographies tend to have straightforward chronologies; this one, not least because its subject is still alive, gets to be a little more poetic in the telling.

If any criticism can be lobbied against the book, it’s that there are less first-hand sources than one might like — co-stars like Kris Kristofferson and Burt Reynolds are still around, for example, and so is Jan-Michael Vincent himself — but absent of access to those people (which can’t be easy to get), this book is as strong a portrait as could possibly be mounted. It’s not a pretty story, but there is occasional beauty in the telling. And the approach has a cumulative effect: I started reading the book not feeling too strongly about Jan-Michael Vincent one way or the other — I liked him just fine in the movies I liked him in, but never really wondered where he went — and by the end I was fairly devastated.

Reading this story, of a talented and basically decent person who ran so far afield of the lucky breaks he’d been granted, really shot sincerely into the essence of me. I’ve never been in a movie with John Wayne or Burt Reynolds, but I’ve experienced some highs in my life, and there sure weren’t as many of them to be found in 2016, to understate the case. This book struck me down and forced me to relate to its subject in a very personal way, and that’s an incredible achievement for a biography, even if it’s admittedly not ideal when trying to keep a timely review schedule.

There is a nobility in restoring consideration and respect to the reputation of a star who has been mostly forgotten. There is even more nobility in appreciating the work of a star who maybe never got all that much respect in the first place, who crashed and burned before his potential was ever fully realized. With this book, David Grove makes the case for valuing Jan-Michael Vincent, and it’s a thoroughly convincing one, if painful. This really is one of the best things I’ve read all year. 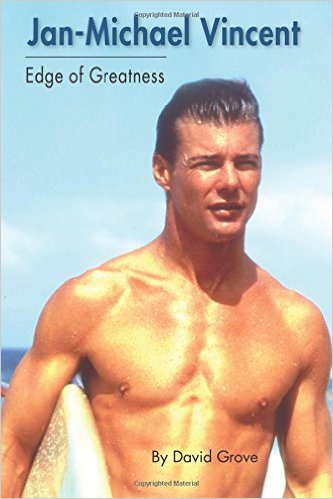