Despite coming out in 2007, David F. Walker’s BLACK SANTA’S REVENGE is even more poignant today than when it was first released. The level of outrage from narrow minded racists due to Minnesota’s MALL OF AMERICA having a black man portray the holiday icon whose role is to bring joy to the children of the world makes Walker’s down and dirty revenge tale even better than it already was. 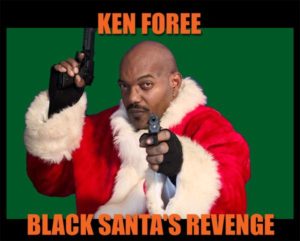 Ken Foree plays an unnamed man who plays Santa Claus for the kids at a local community center. Despite being rough around the edges and enjoying the sleazier aspects of life like shooting dice and visiting the local strip club Foree’s character isn’t BAD SANTA, he genuinely cares about his role in these kids lives and feels that all children deserve to enjoy the holiday. This becomes even more apparent when a group of thugs rob the center at gunpoint and steal the toys, effectively ruining Christmas for the children. This isn’t going to stand for Santa, especially after he finds retelling of the incident being disregarded by the local police. What this leads up to is a wonderfully violent and over the top scene of vengeance as Santa tracks down the thieves and brings begins checking off his naughty list.

This movie clocks in at a lean 20 or so minutes and it’s great from start to finish. Foree is fantastic in the role as a sympathetic and very down to earth man from the hood who can’t bear the thought of seeing kids wake up on Christmas morning only to find out Santa is a fake. Easily the best is when the bullets start flying in the films finale which has Foree delivering hilarious holiday puns while he brings the pain. Everyone else in the film plays their roles great to, with some hilarious lines from the kids who visit Santa and the thugs who rob the center. There’s even a great line from ENTER THE DRAGON that get’s thrown in for good measure. Dirty, violent but surprisingly heartfelt with an ending that, in this writer’s mind, hits that sweet spot of Christmas spirit makes BLACK SANTA’S REVENGE a highly recommended watch this season.