Last weekend, I was thrilled to be able to attend the first annual Brooklyn Horror Film Festival, along with Daily Grindhouse writers Jamie Righetti and Patrick Smith. We took a little time to collect our thoughts, after our brains got knocked out through our butts, but our coverage of the films we saw will be springing up on the site over the weekend. In the meantime we’d like to thank the organizers of the event, and all the people who worked so hard to make it such a blast. Special thanks to Kaila Hier for all the assistance in scheduling. And it was a tremendous treat to finally meet horror expert Matt Barone in person, but I guess if I start naming names of good people, I’ll wear out my welcome here, seeing as how the headline promised the list of winners. (I’m getting there!)
Festival sum-ups are worth paying attention to, even to those who weren’t there, since these sorts of movies — in this case co-curated by the aforementioned Mr. Barone — are usually a big part of the rising tide of what’s new and awesome in international and American horror cinema. I don’t get the chance to make it out to very many festivals myself, so this was  a rare treat for me, and a huge success by any measure for the BHFF. As far as what I personally managed to see at the festival, I saw the short-film line-up, MASTER CLEANSE, BEYOND THE GATES, and TRASH FIRE, but believe me, I wanted to see everything. We were spoiled for choice. Excited to eventually see all the movies I didn’t see last weekend, and really can’t wait until next year! 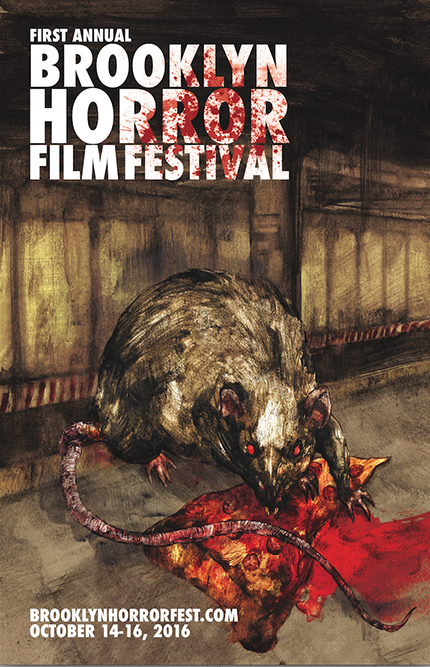 On Sunday, October 16th, the first annual Brooklyn Horror Film Festival came to an end after a jam-packed weekend of screenings and events with an award ceremony and World Premiere screening of festival closer CHILD EATER at Syndicated Theater. Attending filmmaker Jackson Stewart took home the Audience Award for his debut feature BEYOND THE GATES, which screened to a packed room on October 15th.
The first-year festival, which opened October 14th with DEAREST SISTER at the Wythe Hotel Cinema, is proud to report 18 out of 22 events were complete sell-outs with overall attendance and enthusiasm for the fest defying expectations. “The reception that we’ve received from the NYC horror community has absolutely blown me away,“ says festival director Justin Timms. Additional venues that hosted BHFF were Videology, Spectacle, Throne and The Muriel Schulman Theater At Triskelion Arts.
Cinematic highlights of BHFF’s program were two world premieres, the Icelandic/USA joint production CHILD EATER by Erlingur Thoroddsen and locally made PSYCHOTIC! by directors Maxwell Frey and Derek Gibbons, as well as the US premieres of Lorcan Finnegan’s WITHOUT NAME, Cody Calahan’s LET HER OUT, Nathan Ambrosioni’s THERAPY, Fabien Delage’s FURY OF THE DEMON and the North American premiere of Shaun Robert Smith’s BROKEN. The festival was also thrilled to host best-selling author and renown public speaker Grady Hendrix and his spoken word event SUMMERLAND LOST: A GHOST STORY.
A total of 11 countries were represented in the diverse line-up of 26 shorts and 14 features. “ Horror is in a really exciting place right now, with genre lines being blurred and indie filmmakers from all around the world taking big creative risks, and our lineup tried to capture as wide a range of that as possible,“ says head programmer Matt Barone of the films picked. “ Based on the audience’s feedback throughout the weekend, I know that we’ve succeeded.“
Brooklyn Horror Film Festival is excited to announce the winners for our first edition, chosen by our esteemed jurors and through audience votes.
FEATURES AWARDS:
Our features jury was composed of Laura Kern (Film Comment editor, Film Society of Lincoln Center programmer), Matt Donato (We Got This Covered film critic) and Sam Zimmerman (Shudder curator).
Best Feature – WITHOUT NAME– Lorcan Finnegan
Best Director – WITHOUT NAME– Lorcan Finnegan
Best Actor – Noé Hernández – WE ARE THE FLESH
Best Actress – Angela Trimbur – TRASH FIRE
Best Cinematography – Piers McGrail, WITHOUT NAME
Best Editing – Tony Cranstoun –WITHOUT NAME
Best Effects – MASTER CLEANSE – dir. Bobby Miller
Audience Choice Award – BEYOND THE GATES – Jackson Stewart
SHORTS AWARDS:
Our shorts jury was composed of Eric Walkuski (Arrow In The Head/JoBlo Critic), Erlingur Óttar Thoroddsen (Dir. Closing Night Film CHILD EATER) and Jenn Wexler (Glass Eye Pix producer).
Best Short – Pigskin – Jake Hammond
Best Director – Disco Inferno – Alice Waddington
Best Actor – Richard Glover- The Monster
Best Actress – Trieste Kelly Dunn – The Push
Best Cinematography – Zoë White – The Push
Best Editing – Aleksandra Hansen – Pigskin
Best Effects – Gwilliam – dir. Brian Lonano
Best Score – John Carpenter – The Puppet Man
Audience Choice Award – Tilly – Robert Kotecki
Special Jury Award – The Sound Of Blue Green and Red – Joshua Erkman
The festival would like to thank our main fest sponsors: Coney Island Brewery, Horror Pack, El Buho Mezcal, Syndicated, QuickFrame, Brooklyn Fireproof Stages, and Throne Watches. Additional sponsorship thanks goes to Uber, Bruce Cost Ginger Ale, Brooklyn Bean Roastery, Essentia and Skinny Pop. Additional thanks goes out to supporting sponsors Screencraft, Boroughs of the Dead, Hattan Media, The Kings Of Karaoke, and Salty Road.
Special thanks to our media partners We Got This Covered, and Bloody Disgusting as well as our friends of the festival BK Horror Club and Brooklyn Music Festival.
BHFF extends a huge thanks to all the audience, filmmakers, and volunteers that came out to support us in this exciting first edition. We look forward to returning again next year and bringing the festival back to Brooklyn, even bigger and better than before.
http://brooklynhorrorfest.com/
For additional photos from the festival please visit our official Flickr HERE
Official film stills and poster art can be found HERE