Film noir and other varieties of crime movies aren’t my genre forte. What little bit of knowledge I do have about these styles let me recognize the tropes that are necessary to create the proper aesthetic. Brooding moody characters, dramatic tension, and an almost predictable story arc are all part of a perfect formula to create the faultless, smart crime drama.

I may not know a lot about this particular film world—but if you add in an element of the absurd, I’m 100% on board. That is exactly what director Tyler Cornack has done with BUTT BOY by taking a classic style held in high regard and subverted it into some of the most bizarre and humorous cinema that I have seen in a long time.

Over time, Chip has buried his desire to shove things up his ass by going to Alcoholic Anonymous meetings. After several years, he becomes the sponsor to recovering alcoholic Detective Russel Fox (Tyler Rice). Chip has a relapse which leads to another missing child. Detective Fox is the lead investigator on the case, and the level of insanity goes from 0 to 100 in no time at all.

Sure, I’ve seen several movies that have to do with butt stuff. BAD MILO (2013), a film about a demon that lives in a man’s ass, is one of the most absurd horror comedies of all time. What sets BUTT BOY apart from films like BAD MILO is that it’s played completely straight.

Writers Ryan Koch and Tyler Cornack did a magnificent job in creating dialogue that was both characteristically noir but therefore also filled with pitch black comedy. It’s not an easy task to pull off a script that is both serious and comedic at the exact same time, but BUTT BOY does it seamlessly.

Visually, cinematographer William Morean captured a dark ’80s look. The works of director Alan Parker (ANGEL HEART, MISSISSIPPI BURNING, and MIDNIGHT EXPRESS) seem to be a huge influence on the majority of BUTT BOY visual aesthetic. Although the scenes that take place inside Chip’s bowels—yes, you read that right—are more reminiscent of a sci-fi movie. There is an otherworldliness that is terrifying. Much more of a James Cameron feel via GALAXY OF TERROR or ALIENS.

I really can’t say enough great things about BUTT BOY. The tension formed rivals that created by David Fincher with his 1995 film, SE7EN. One other thing, the stark synth driven score by Koch and Cornack, helps cement the ’80s feel. Without making the movie a nostalgia-driven genre film, the soundtrack was sparse enough to let the film breathe and maintain its serious tone.

If you’re like me, and you adore absurd cinema, then BUTT BOY is a must watch. The finale is possibly one of the greatest cinematic moments in film history. Who would have thought that butt stuff, film noir, and crime drama combined could make such a remarkable dry comedy? 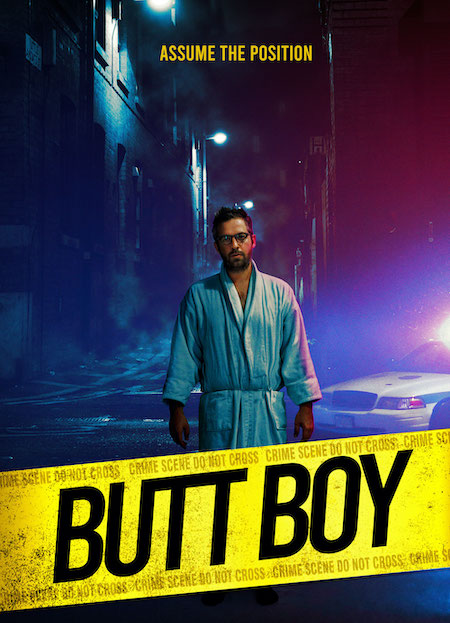