There is no place in the cinematic universe where the absurd is more celebrated more than in genre cinema. The best way to describe these films, while paying them the utmost respect, is to simply refer to them as irreverent. Beyond explanation, and sometimes beyond comprehension, a brilliant irreverent film will make you laugh, gross you out, leave you feeling disturb—or all of the above. Personally, these are my favorite type of movies to enjoy. This got me thinking what would I consider to be the top 10 irreverent films created during the past decade. Without dwelling on it too long, here are my thoughts on this topic. 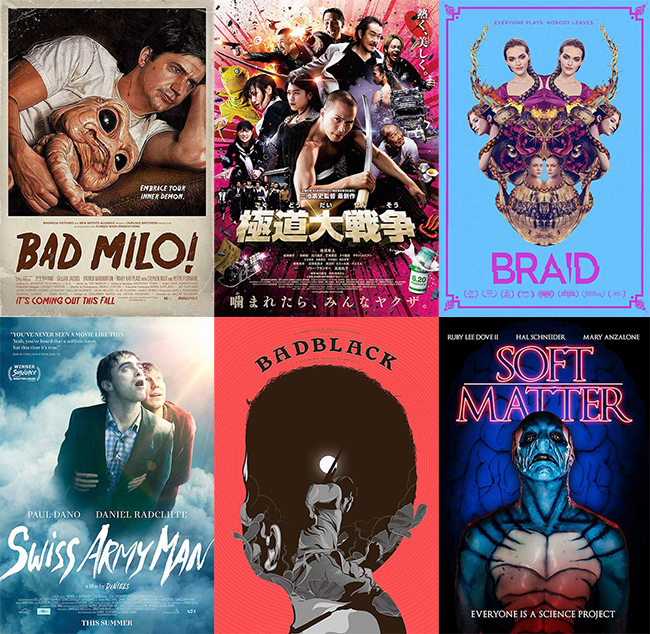 Adults who like modern fantasy films are rarely going to take the time or energy to dig for something deeper than the Hollywood studio system fodder that is dished out as pablum to be consumed by the masses. DAVE MADE A MAZE is the classic set up of a teenage fantasy/adventure film, but altered with the change to an adult artist type who hasn’t accomplished anything noteworthy in his life. The protagonist, Dave (Nick Thune), builds a cardboard fort in his living room out of unadulterated frustration. The major issue is turned into a paper bag puppet, and is trapped by his own creation. If you are a fan of practical effects, then this fantasy world brought to life through puppets, stop-motion-animation, and deliberate sense of amazement from the movies of our childhood by director Bill Watterson is for you.

When I heard a title of the movie THE VELOCIPASTOR, I immediately thought the worst: this was going to be a smug, genre shlockfest like the SHARKNADO franchise. Was I wrong? Not completely, but at the same time the ludicrous execution of this film propels it to a strong sense of excellence. When pastor Doug Jones (Greg Cohan) survives the deaths of his parents, he travels to China. Once in China, he receives a mysterious capability that allows him to turn into a dinosaur. At first, he is petrified with the idea, but eventually convinced by a hooker with a heart of gold (Alyssa Kempinski) to use his powers for good to fight ninjas and crime. THE VELOCIPASTOR is quite possibly the most ridiculous film I’ve ever seen—and that’s saying a lot. Who would have thought a man of the cloth turning into a dinosaur and ripping people to shreds could be so much fun? Lots of laughs and gore, THE VELOCIPASTOR is a good time for sure!

Kevin Smith broke into film making with his slacker comedy CLERKS (1994) that focused on the misadventures of Dante (Brian O’Halloran) and Randal (Jeff Anderson) in their everyday lives working in a convenience store. So, why not use a similar premise 22 years later for his second entry in his “True North” trilogy? That’s basically what he did here, but he gender-flipped the main characters and added horror/fantasy/adventure elements to create something completely new and exhilarating. YOGA HOSERS is the tale of two teenage girls who are both named Colleen (Lily-Rose Depp and Harley Quinn Smith) who just want to party and play punk rock. Unfortunately for these two yoga enthusiasts, the gas station they work at is on top of an evil presence that they must do battle with for the bulk of the film to save Canada. I’ve gone on record as saying that, if you don’t like YOGA HOSERS, then you’re probably a pretentious movie critic nerd that needs to loosen up and have some fun. YOGA HOSERS is for fans of movies with ridiculous mini-monsters in them—like ARMY OF DARKNESS (1992), GHOULIES (1984), and THE GATE (1987).

The 1980s brought us some of the greatest splatter films ever created. BAD TASTE (1987), BASKET CASE (1982), and STREET TRASH (1987)—just to name a few. All of these films were a lot of fun to watch but none of them had a strong social-political subtext. In 2015, director Eli Morgan Gesner did the unthinkable, he created a splatter film with a message about class struggle. Poor little rich girl Maya (Dylan Penn) is sick of her parents bickering and runs away to stay with her boyfriend who is squatting in a condemned building in Manhattan’s Lower East Side. When their degenerate junkie neighbors are submitted to a virus born of poisonous waste, they each become violent, blood-thirsty mutants. With all the vomit, diarrhea, blood, guts, and gore, 2015’s CONDEMNED is not for anyone with a weak stomach. Here’s one for the true gore hounds!!!

What do you get when you mix the horribly over used horror trope of young good-looking people partying in the woods waiting to be killed off with undeniably Troma-esque story of toxic waste accidentally falling off a truck and landing somewhere it shouldn’t? You get the ultimate party movie, ZOMBEAVERS. Without thinking about it too much, I’m sure you can figure out that the beaver infested swamp that these kids are partying up at soon becomes a life or death situation. The beavers get into the toxic waste dumped in their swamp and become flesh eating monsters. ZOMBEAVERS is a great homage to 1980s horror movies. It almost borders on parody, but the cast keeps the over-acting in check, and play it straight just enough, so that ZOMBEAVERS feels genuine. So much fun!

In 2017, visual artist, composer, and actor Steven Ellison (better known by his stage name, Flying Lotus) directed his first feature length film, KUSO. This is a mind-blowing work that presents a post-apocalyptic Los Angeles and the bizarre occurrences that evolve there after a catastrophic natural disaster. It’s funny that the term “kuso” is used in East Asia to describe internet culture, and generally includes parody and camp. In Japanese, “kuso” also means crap. All of this makes sense, because through Flying Lotus’s non-linear story-telling he has presented clever social satire that references defecation. KUSO is not a movie for everyone. I loved it, but I love gross-out humor and socio-political art and this effort is a perfect combination of both.

4) SPRING BREAKERS (2012)
SPRING BREAKERS is a violent drama and a twisted homage to the teenage sex movies of the ’80s. A lot of people didn’t like this movie but I thought it was amazing. Wild teens Brit (Ashley Benson), Candy (Vanessa Hudgens), Cotty (Rachel Korine), and Faith (Selena Gomez) just want to have fun. Unfortunately, these GIRLS GONE WILD rejects don’t have enough money to make it to spring break. Solution? Get some ski masks, and water guns and rob the local diner. They pull off the heist, party it up, and then get arrested for procession of a controlled substance. They get bailed out by a local rapper named Alien (James Franco) and soon get involved in a gang banging drug war. SPRING BREAKERS is probably director Harmony Korine’s most mainstream film and I loved it. Everything from the repeated camera shots to the dialog soundtrack played over scenes where the characters weren’t talking are all very indicative of Harmony’s work. To me SPRING BREAKERS spoke largely of racial tensions and the sense of entitlement that gets worse with every generation. This movie also isn’t for everyone, but it was definitely for me.

When I first heard the title of ATTACK OF THE ADULT BABIES, I was enamored, but when I saw the trailer for the film, I became quite aroused — and you can take that any way you want. Anyone who knows my taste in genre films knows I like it weird, funny, gross, and violent, and oh boy, does ATTACK OF THE ADULT BABIES deliver on all accounts. An out-of-the-way rural retreat is broken into by three family members in order to retrieve top-secret documents. Unfortunately for them, they stumble on a cult of extremely wealthy men who are taken care of by sexy nurses. Limbs are chopped off, eyes gouged out, guts disemboweled, and all to my glee. The more blood there is, the harder I’m laughing. For some reason, I don’t think anybody else in the theater enjoyed it quite as much as I did. Everything from the synth-driven score to the extreme level of excess just screamed 1980s splatter fun. The early works of Peter Jackson (BAD TASTE) immediately came to mind. If explosive diarrhea, extreme gore, and absurd humor is your jam, if you’re a fan of Troma films, then you’ll love ATTACK OF THE ADULT BABIES. Watch, laugh, and try not to lose your lunch.

I have seen some strange movies over the years, but THE GREASY STRANGLER has to be one of the most bizarre movies that still has a linear narrative. It’s as if director Jim Hosking took the awkward characters from NAPOLEON DYNAMITE and placed them in the ultra-offensive world of STREET TRASH, and sent everybody on a wild psychedelic acid trip. There is a wacky disco walking tour lead by Ronnie (Michael St. Michaels) and his son Braydon (Sky Elobar). When sexy Janet (Elizabeth De Razzo) takes the disco tour, it sets in motion a competition between Ronnie and Braydon to win her love. The whole time, the city is in the grips of a mad killer who’s covered in oily slime, and strangles his victims. The hilarious catch phrases will stick in your mind and only you and your closest friends will laugh about them. I’m a huge fan of sex, violence, and gross-out humor, and THE GREASY STRANGLER has all of the above in abundance. There’s even confetti… fucking confetti! THE GREASY STRANGLER is an exercise in absurdity and excess, and I couldn’t possibly love it any more than I do. There is no other movie that fully embodies the idea of irreverence like THE GREASY STRANGLER does.