Watching CARGO, it becomes apparent that consistency in tone is a hard element to quantify in films. Often times reviews (including those written by this particular critic) will point out tonal inconsistencies or a lack of coherence. But many of the best movies ever made are a combination of tones—from the hilarious to the maudlin to the shocking and more, sometimes within the span of the same scene. These tend to be some of the most beloved and revered titles because not only does it allow for the audience to experience a gamut of emotions instead of just one note the whole time—but it is also reflective of life. No one’s experience is just a tragedy, or only a comedy, or only an action story—it’s a mix of all of these and more, which is why films that are able to pull off multiple genres and tones resonate so well with viewers.

That being said, it’s still hard to pull off moving from one tone to the next without feeling awkward; filmmakers have to be able to make these various emotions feel all of the same cloth, without undercutting each other or feeling grotesquely juxtaposed. CARGO, from writer/director Arati Kadav, is an impressively made film that looks great and has a ton of ideas and emotions it wishes to capture and explore—but unfortunately there is a lack of coherence to these threads. Instead of feeling braided together to form a strong rope, too often the scenes and storylines feel like oddly inconsistent tangents. 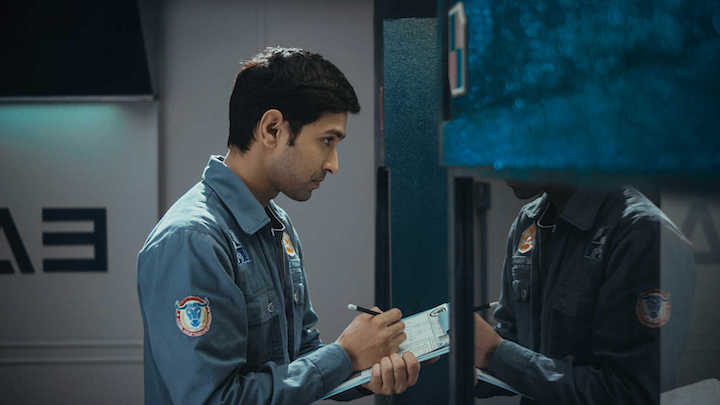 CARGO (which was supposed to screen at SXSW 2020 before that event was canceled) concerns a spaceship orbiting earth and manned by one person, Prahastha (Vikrant Massey). Well, that’s not exactly true—Prahastha isn’t a person so much as a demon. In the world of CARGO, demons are essentially grim reaper figures that help escort people into the afterlife once they die; they also have special powers and created a treaty with humanity in order to set up this spaceships as Post Death Transition Services to receive the dead and usher them on in the cycle. Prahastha has been alone on his ship, Pushpak 634A, for many years—but is about to receive a new assistant, Yuvishka (Shweta Tripathi). Yuvishka was top of her class, knows the handbooks inside and out, and is able to heal the dead instead of using the finicky devices that Prahastha still employs. The two demons alternate in clashing with and comforting each other while dealing with the arrivals of precious cargo every day.

There is a lot to love about CARGO…but there is also just a lot in CARGO. The aesthetics are great using a Cassette Futurism-style for the interiors of the ship and most of the technology employed. It allows for a lo-fi approach which was probably fairly inexpensive but also serves a thematic purpose undercutting how, even though this is arguably one of the most important duties in the world, it’s still using antiquated tech that is constantly breaking. And even though it was most likely not too costly to build, CARGO never looks cheap or ramshackle (though the CGI for the exterior shots aren’t great) but instead has a real retrofuturistic charm that works well with most of its plucky attitude. Kadav’s film feels like an assembly of Douglas Adams’ Dirk Gently books, Bryan Fuller’s work with Pushing Daisies and Dead Like Me, Duncan Jones’ MOON, and a sprinkle of I HEART HUCKABEES—but even then it’s utterly unique.

There is a lot of whimsy in many of CARGO‘s scenes—whether it’s the loneliness detective that investigates why people feel alone (by essentially moving in with them and stalking them), or the brief scenes of people dying before arriving on Pushpak 634A, the bureaucratic chit-chat with the ground control personnel, or even the cute drawings that Prahastha scribbles to pass his many years in solitude. And then there’s also an undercurrent of sadness as Yuvishka is shaken by the fact that this task isn’t like the handbook suggested it would be; or Prahastha pining for a woman he writes letters to but tosses into various boxes rather than send out. All of these elements are great…but they aren’t really woven together. There will be a scene of comedy, then a scene of sadness, then some narrative momentum as Prahastha tries to help Yuvishka (or vice versa), and various calamities that befall the spaceship.

Instead of feeling like this is all happening in the same world and intertwined for greater emotional payoff, it merely feels like each scene is its own entity. Or like some sort of odd rhyming scheme in a poem where scene A is funny, scene B is sad, scene C is informative, and then switching it up that way without ever feeling tied to each other. Which is a shame because there is a lot to love about CARGO—it has great ideas that blends fantasy with sci-fi with comedy with workplace drudgery and more and more. It looks fantastic and the actors really sell their characters (even if they are somewhat inconsistently written).

There is also a weird element where everyone on earth knows about demons and the audience is told that many of the Post Death Transition Services crews on other ships are social media stars with tons of fans—but no one that arrives on Pushpak 634A knows what’s going on. Yes, it’s one thing to be confused that one is dead when they still feel very much alive; but if this is a known experience with tons of followers, it shouldn’t be that foreign to them. It’s admittedly a small nitpick but meant as an example that not everything in CARGO was thought all the way through. 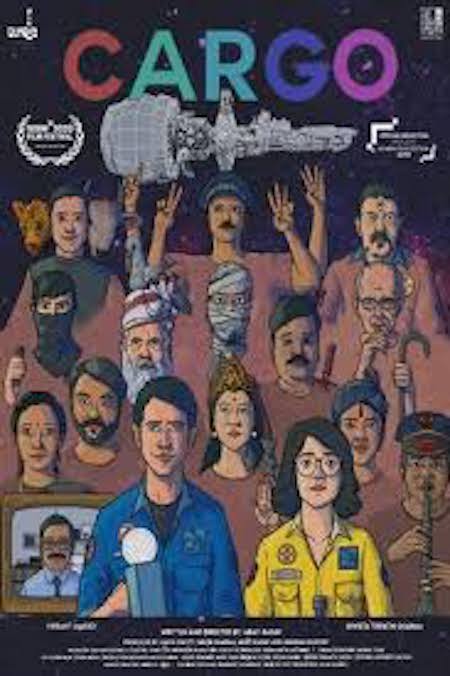 It takes incredibly deft hands to manage tonal shifts in a film without giving the audience whiplash and pushing them out of emotional engagement. Kadav has a lot of great ideas, strong scenes, and employs excellent aesthetics in CARGO, but she ends up being undone by a lack of focus. It’s not that movies shouldn’t have a multitude of emotions and moods—they absolutely should! As Alan Moore once said:

But the issue lies in connecting these feelings and tones in a way that seems natural—following a sort of internal rhythm and logic that isn’t segmented. CARGO suggests Kadav has the makings of a great filmmaker able to cross-pollinate genres while having incredibly unique ideas and visions. It will be great to watch her progress in her projects and hopefully the next movie will have a bit more focus.