I’ve given Charles Band a fair amount of ribbing over time, most notably in last year’s April Fool’s piece – but you don’t put out titles like EVIL BONG 3-D and then not expect to get a little jibing for it.  But the truth is that I’ve got genuine respect for the man behind Empire Pictures and Full Moon Entertainment, and I’ve always admired his ambitions, even if those ambitions don’t always come off as well as the ad campaigns promise.

There’s a strange, wonderful innocence to the best of Band’s output, a real “let’s put on a show” mentality that encapsulates Band’s ambitions to get his films made.  The best Empire Pictures films are so packed with great concepts that there’s no way they can’t live up to the hype – where normal b-movies would be satisfied with running with one idea, 1986’s ELIMINATORS, for example, has cyborgs AND ninjas AND robots AND jungle adventures AND time travel AND wet t-shirts.  Years before “Axe Cop,” Charles Band took the ideas (whether originated by him or others) that seem like the chaotic comic book of a hyperactive puberty-stricken science fiction fan and actually turned them into movies, and for that, he’ll always have my interest.

My first exposure to the world of Charles Band – at least in the sense that it was the first time I realized that it was one guy behind all of these varied projects – was in the pages of Fangoria, around the time of Full Moon’s relaunch.  The Band-produced remake of THE PIT AND THE PENDULUM, then to star Peter O’Toole and Billy Dee Williams, was on the horizon, and I devoured any information the periodical had to offer.  In the days before online genre writing, Fangoria was the bible of new horror information, and even in the horror desert that was the early ‘90s (witness the likes of DOLLY DEAREST on the cover), each issue was eagerly studied by my teenage eyes to the point of obsession.  (It helped that I was working at a Blockbuster Video at the time, which meant that I could see most major horror titles as soon as we got them, and Full Moon’s output was always at the top of that list.)

It’s not surprising, then, that for Band’s new bi-monthly magazine “Delirium,” (no relation to the ‘90s horror mag of the same name) they’ve used Fangoria as template.  Band has a history of being transparent with his work, with the “Videozone” shorts that followed each Full Moon feature on VHS branding the company nicely and giving you a “behind the scenes” look at the projects, enabling audiences to connect with and follow certain directors, actors and effects artists in a way few genre companies had done, so a periodical on the past, present and future of his work utilizing a format that’s comfortable to the horror fans that have grown up on his work is certainly a notable pursuit.  “Delirium” even goes so far as to be edited by “Fangoria” editor (and Uwe Boll fighter) Chris Alexander, who was responsible for returning the iconic horror mag to the layout of the early ‘90s. 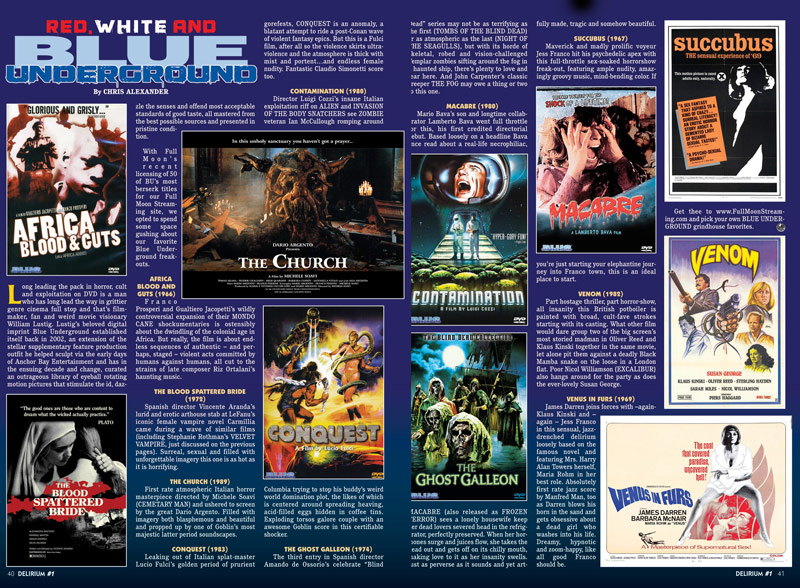 If the first issue is any indication, it’s a collaboration that’s paid off quite nicely, as the magazine feels so much like an early ‘90s horror mag, full of interviews, (Band-related) news, and garish, eye-popping color that I expected to turn the page and see the Video Eye of Dr. Cyclops ripping into a HOWLING sequel.  Stuart Gordon’s RE-ANIMATOR takes center stage, starting with the cover and continuing through extender interviews with Gordon, composer Richard Band and star Barbara Crampton, the former two conducted by Alexander and focusing almost entirely on the legendary shocker.  Gordon himself pens a the first column in what will undoubtedly be a fascinating series on his early stage work in Wisconsin, a part of his career I’d love to hear more about and one Gordon discusses with vividly-recollected tales.

Alexander also conducts an unfortunately brief interview with NURSE 3D director Douglas Aarinokosi, ostensibly about his days as an assistant director on Full Moon titles like TRANCERS III and DOCTOR MORDRID, but delving into the likes of TALES FROM THE HOOD as well.  Band’s new Wizard Studios is profiled, with previews of the new brand’s first three releases, and we also get a look at Blue Underground’s most notable titles, a look at toys that doesn’t really feel like anything more than an advertorial and a brief interview with KILLER EYE 2 star Olivia Alexander.  To top things off, we even get a great pin-up – a recreation of the Japanese mini-poster for RE-ANIMATOR.

On the retro front, we get an Alexander-written retrospective of 1972’s THE VELVET VAMPIRE, featuring input from the film’s star Celeste Yarnell, who shares great stories about the production amid vividly colorful stills and posters in a feature that would be more than at home in an issue of “Fango.”  Dave Jay, the author of the recent “Empire of the Bs: The Mad Movie World of Charles Band,” presents a piece from his book on David Schmoeller’s TOURIST TRAP to similar effect, presenting the final word in terms of a look at a film that may not have received the respect it’s been due.

Alexander does a fine job at creating a comfortable, familiar style that should satisfy anyone who’s been even a tangential fan of the Band over the years.  The willingness to not be “work safe” is certainly a plus, and I appreciate the fact that the magazine doesn’t have an issue with gore or nudity, placing it more in line with “Gorezone” in terms of aesthetics.  (Though with RE-ANIMATOR as a large focus, it’s not surprising that the photos of a topless Crampton on pages 15 and 19 are essentially the same, — It does, however, create an odd flip-book effect.)

“Delirium” starts off promisingly enough, though I’m both curious and cautious as to what future issues will bring.  The Charles Band library isn’t that huge or full of notable genre favorites, so it remains to be seen whether they can keep up the pace.  However, if this means that we get an “Oral History of DEMONIC TOYS” or a long-form interview with Danny Bilson, I’ll be more than happy.  As long as Alexander and Band seem to be having fun, “Delirium” is a state worth having.

Order the first issue or a subscription here!