We’re back!  No strings attached!  And this time it’s personal!  Yes, we’re continuing our look at the 50 Greatest Fake Trailers of All Time, compiled with our intricately scientific method explained in Part 1 with another ten flicks that we’d love to see but can’t, due to their lack of existence.  We hope you enjoy these previews of coming temptations…

Helen Mirren makes her first of two appearances on this list in this great trailer that pokes fun at sequels that emerge long after nobody cares about the franchise and desperately tries to fit in with modern audiences. It’s also a well-crafted trailer that sets up the fictional premise quite well, showing off the conceptual film’s best and funniest parts. Plus, vampires! And Mike Tyson!

From THE ONION MOVIE

THE ONION MOVIE is a sore spot in the venerable good name of the vegetably-named satirists, the sketch comedy film being one of the few uses of the brand that didn’t really pan out. One of the few bright spots, however, was a trailer for a Steven Seagal film called COCKPUNCHER, which involves.. well, Steven Seagal and punching guys in the cock. It shouldn’t work — the rest of the movie is pretty lame, and Seagal’s talents for comedy are, to put it nicely, minimal, but it does, thanks to a knowledge of what makes stupid ’90s action movies work.

We here at Daily Grindhouse love our foreign offshots of American concepts, and this short trailer for a “lost” Italian Spider-Man film by an Australian filmmaking group is almost convincing enough to be the real thing. The trailer became popular enough to launch an actual web series of ten episodes, but for quick entertainment, the original, featuring a pudgy, long-haired webcrawler fighting masked crime in garish ’70s outfits and perfect music, can’t be beat. If the acting weren’t quite so self-aware, it would be perfect.

Richard Donner’s SCROOGED has so many great moments of pop culture parody, but one of the best is its’ opening, a promotional short for an upcoming TV movie in which Lee Majors has to save Christmas. Sure, it doesn’t actually feel like a “trailer” until near the end of the clip, but Major’s awkward look as Santa tells him how good he’s been this year sells the whole thing.

Aaron Paul IS “Weird Al” Yankovic in Appel’s perfect trailer for a musical biopic based on the life story of the world’s greatest accordian-based musical satirist. Sure, the casting is fantastic, and the rise-and-fall plot points are all in place, but all it takes is a look at the trailers for any music biopic (hello, GET ON UP) to know how well Appel nailed not only the concept, but how to sell it. Talented actors in small bit parts? Far too perfect music montages? Love and loss? WEIRD has it all.

From WHEN NATURE CALLS

Troma’s WHEN NATURE CALLS has a number of entertaining bogus movie trailers before the “feature presentation,” including one for an infant mobster pic called BABY BULLETS and another for a boxing flick called RAGIN BULLSHIT. but the winner of the batch is GENA’S STORY, a melodrama marketed to the blind. It would be offensive if it made any damn sense at all, but it’s a “serious woman’s picture” in which a smoking “narrator” just sits in the top right corner and gets increasingly confused. It works because the trailer itself is so straight-faced, and the narrator’s presence just makes the whole thing an absurdist spectacle. (Trailer starts at 3:39)

Ben Stiller was no stranger to movie trailer parodies when he directed TROPIC THUNDER thanks to his work on “The Ben Stiller Show,” (more evidence to that effect later) but THUNDER gave him the chance to create fake publicity for three films (and a beverage) in which his lead characters starred. As good as SATAN’S ALLEY and THE FATTIES are, SCORCHER VI: GLOBAL MELTDOWN, a take on long-running action franchise teasers, is the winner, thanks in no small part to perfectly-tuned narration. “Here we go again… again.” 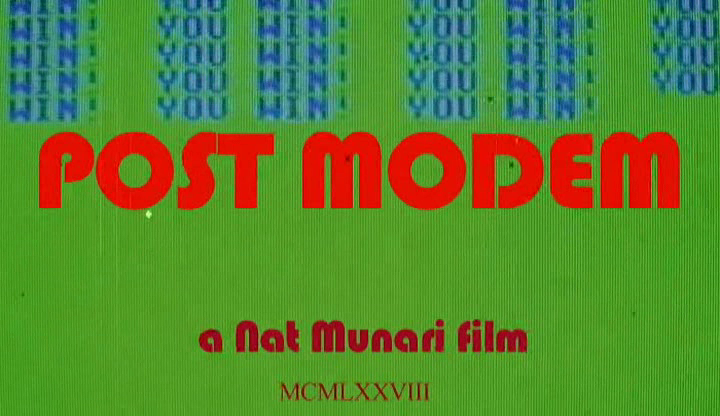 Made to accompany Colegrove-er-make that “Antonello Giallo”‘s ISLE OF THE DAMNED, a feature that pays homage to the Italian cannibal film, POST MODEM is a crazed combination of giallo and early ’80s technothriller, and while the movie itself doesn’t exist, it sure looks like a hell of a lot of fun. The trailer is only available on the DVD for ISLE, but it’s almost worth picking up the DVD for that extra alone. (Good thing the bloody ISLE is fun as well.)

GRINDHOUSE afforded several filmmakers to make great fake trailers to play before and between Tarantino and Rodriguez’s features, and Roth’s take on ’80s slasher films is so good that even his most ardent critics would have problems attacking it. The perfect mixture of love for the genre and embracing of its inevitable cliches, THANKSGIVING is the slasher movie so many holiday-themed slice-em-ups promise, and so few actually deliver. The bird. The trampoline. It’s all fantastic, and as much as I love it, I love the fact that it wasn’t turned into a movie even more.

don you go rounin roun to re ro from Chitharanjan Das on Vimeo.

Have a tough time watching the likes of LOCK, STOCK AND TWO SMOKING BARRELS without subtitles? This is the faux trailer for you, a perfectly crafted replication of “the most British crime drama of the year” in which you can’t understand a damn thing. Sure, it’s a one-joke premise, but the editing nails the genre and the critics’ quotes just drive the point home.