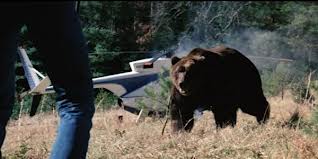 A while back, we brought you the news of Scorpion Releasing’s deal to distribute their product through Kino-Lorber, including a list of very intriguing titles.  Well, we’ve got official street dates for the first batch of titles, with a number of them due out on August and filled with special features!  Check out the specs and box art below, and watch for other scorpion titles like Jonathan Demme’s LAST EMBRACE, the AIP film JENNIFER and the Corman-produced SORORITY HOUSE MASSACRE coming this fall!  Keep tabs on Scorpion via their Facebook page here! 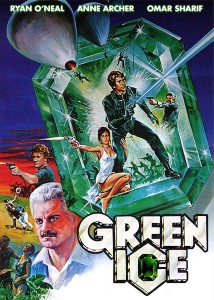 In the Andes mountains a group of archaeologists are murdered after they discover uncut emeralds. Back in New York, Joseph Wiley (Ryan O’Neal, Love Story) is down on his luck and runs off to Mexico where he meets Lilian Holbrook (Anne Archer, Fatal Attraction). The two are instantly attracted to each other, but Lilian is on her way to meet Meno Argenti (Omar Sharif, Doctor Zhivago), the man who intends to marry her. Wiley is mistakenly drawn into perilous adventure when a mysterious caller tells him to look at the samples – stolen emeralds. Lilian’s sister is killed and, suspecting Argenti, Wiley and Lilian, in a bid to avenge her murder, plan a daring raid on Argenti’s vault of emeralds – green ice. Also starring John Larroquette (TV’s Night Court).
1981 * Color * 115 Minutes * 16×9 Widescreen (1.85:1) * Rated PG *
Genre: Action / Adventure 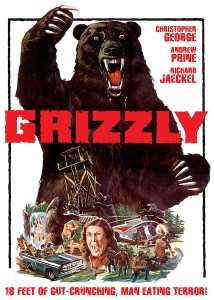 When an eighteen-foot, two-thousand-pound grizzly bear starts mauling campers and hikers at a state park, a park ranger (Christopher George, The Exterminator) springs into action. But the job is too big to tackle alone, so he enlists the aid of a naturalist (Richard Jaeckel, The Dirty Dozen) and a helicopter pilot (Andrew Prine, The Evil) to take this freak of nature down. Meanwhile, the giant grizzly, not content with picnic baskets, continues to kill indiscriminately, leaving pools of blood and piles of body parts in his wake. Can the ranger and his cronies end the grizzly’s reign of terror without resorting to excessively extreme measures? This post-Jaws, nature-runs-rampant thriller was directed by William Girdler (Day of the Animals), and was a box office hit and the top-grossing independent film of 1976.
1976 * Color * 89 Minutes * 16×9 Widescreen (2.40:1) * Rated PG *
Genre: Horror 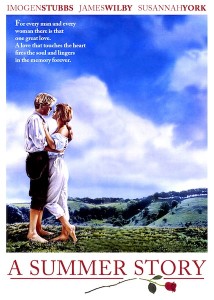 A country girl has a brief, life-shattering moment when she falls for a young lawyer. Adapted from John Galsworthy’s The Apple Tree, the film tells of the relationship between a young London lawyer, Frank Ashton (James Wilby, Handful of Dust) and Megan David (Imogen Stubbs, True Colors), the innocent girl who helps him during his recovery from a twisted ankle at the farm where she lives. The attraction between the two is overpowering; they make love in the farm hayloft and vow never to be parted. But Frank goes to Torquay where he meets an old schoolfriend and his lovely sister Stella (Sophie Ward). Thus, Frank’s plans become muddled and Megan comes looking for him. A Summer Story of young love. Also starring Susannah York (Tom Jones) and Jerome Flynn (TV’s Game of Thrones). 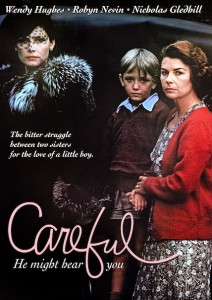 Set in Australia in the 1930s, this drama stars Nicholas Gledhill as P.S., a six-year old boy who lives with his Aunt Lila (Robyn Nevin, The Matrix Reloaded, The Matrix Revolutions) and Uncle George (Peter Whitford, Strictly Ballroom). P.S.’s mother died in childbirth, so her sister Lila took him in, and while George and Lila don’t have much money, they always done the best they could to the give the boy a good home. One day, Lila’s older sister, Venessa (Wendy Hughes, My Brilliant Career) arrives from a trip around the world; Vanessa is quiet wealthy, and upon her return to Australia, she expresses interest in taking custody of the child. Lila is willing to let the boy meet his aunt, but decides to fight her in court when she decides that she wants the boy full time. The case becomes more complicated by the arrival of the boy’s long-absent father, Logan (John Hargreaves, Emerald City), an alcoholic who loves his son, but is incapable of caring for him. Careful He Might Hear You won 8 Australian Film Institute Awards, including Best Picture, Best Actress (Hughes) and Best Supporting Actor (Hargreaves).

* A CHILD’S JOURNEY FROM THE PAGE TO THE SCREEN: 74 Minute Featurette with all new interviews with actors Wendy Hughes, Nicholas Gledhill and Producer Jill Robb
* A 35 minute 1985 Interview with Author Summer Locke
* Stills Gallery 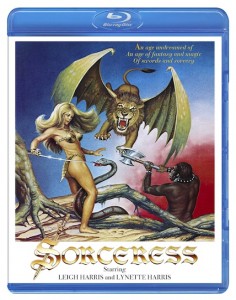 From legendary producer Roger Corman (Bloody Mama) comes the box office hit of 1982, Sorceress. When an evil Wizard Traigon makes a pact with the dark forces to sacrifice his first born to his God Caligara to gain the highest degree of power, but things get complicated when his gives birth to twin. Having knowledge of her husband’s plan she runs away and her two daughters grow up to be beautiful warriors played by playboy playmates Leigh and Lynette Harris. After the death of their mother and adopted families at the hands of Traigon and his army, the twins blessed with the forces of light and strength given to them by the magical warrior Krona, join forces with Baldar the Viking and Erlik the Barbarian to take down Traigon and avenge their mother’s death. Standing in their way is all sorts of Traigon’s minions, from an army of ape man to undead zombies which leads us to a climax in an all out battle between good and evil! Now watch this cult classic, not only from a brand new HD master, but from a previously never-before-seen longer version!
1982 * Color * 83 Minutes * 16×9 Widescreen (1.78:1) * Rated R *
Genre: Fantasy / Adventure 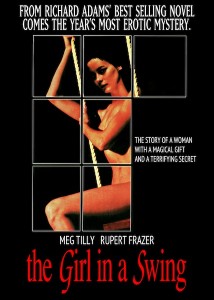 A London art broker (Rupert Frazer, Empire of the Sun) goes to Copenhagen where he requires the services of a secretary fluent in Danish, English, and German. He falls deeply in love with the woman (Meg Tilly, The Big Chill), despite the fact that he knows virtually nothing about her. She insists on not being married in a church, and after they are married, some bad things from her past begin surfacing in subtly supernatural ways, and he must find the best way to deal with them without destroying their relationship. Based on the best selling novel by Richard Adams (Watership Down) and directed by horror specialist Gordon Hessler (Cry of the Banshee, The Oblong Box). 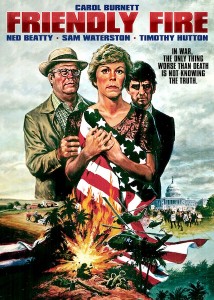 The true story of Peg (Carol Burnett, The Four Seasons) and Gene Mullen (Ned Beatty, Deliverance) who pursue the truth over their son’s death in Vietnam. After their son is killed in Vietnam the couple’s on-going inquiries eventually establish he was killed by ‘artillery fire from friendly forces’. This beautifully orchestrated, harrowing story, assembled with uncommon sensitivity, is one of the most dramatic works ever made about the Vietnam War. Directed by David Greene (Hard Country) and based on the novel by C.D.B. Bryan (So Much Unfairness of Things) The wonderful cast includes Sam Waterston (The Killing Fields), Timothy Hutton (Ordinary People) and David Keith (An Officer and a Gentleman). Winner of 4 Emmy Award® including Best Director and nominated for 3 more including Best Actor and Best Actress. 1980 Peabody Award Winner and DGA nominee foe Outstanding Directorial Achievement in Specials or Movies Made for TV. 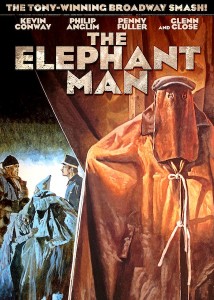 The story of John Merrick (Philip Anglim), The Elephant Man, and of his triumph over his terrible affliction. It is a story of life and the affirmation of life; timeless, tragic, uplifting and heroic; an exultation of the humanity of a man trapped inside the twisted, lesion-ridden grip of a terminally disfiguring disease. We see John Merrick as a man with many admirers, beginning with the witty and beautiful actress, Mrs. Kendal (Penny Fuller), who, so taken with Merrick, brought a who’s who of English society to visit him regularly. The stellar cast includes Glenn Close as Princess Alexandra and Kevin Conway. Directed by DGA nominee Jack Hofsiss (1984 TV Movie, Cat on a Hot Tin Roof). Winner of 1 Emmy Award® for Best Supporting Actress (Fuller) and nominated for 3 more including Best Actor, Philip Anglim who also received a Golden Globe nomination for Best Actor in a Mini-Series or Made for TV Motion Picture.