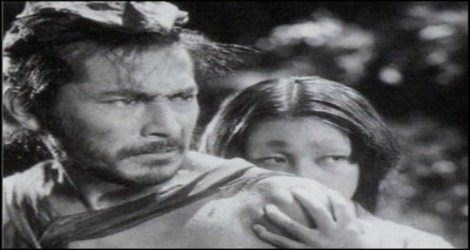 Okay you highfalutin film fans; time to don the monicle and point your pinky finger in the air with a mildly amused look on your face. It’s time once again to jump into the world of Criterion. The classy crew just unleashed the November titles and I like what I see. Along with a well needed Blu-ray upgrade, we have some selections that I am pleased as punch to see get the finest treatment around. Crack open your favorite top shelf spirit and let’s see what’s doin’ under those fancy pants. 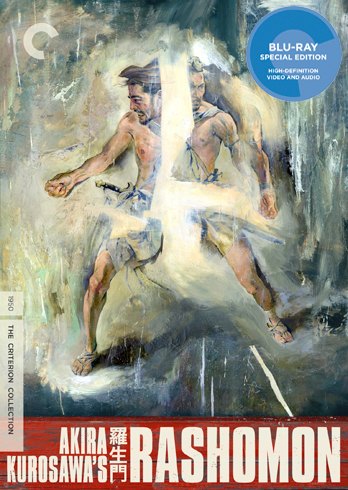 THE SKINNY FROM CRITERION:
A riveting psychological thriller that investigates the nature of truth and the meaning of justice, Rashomon is widely considered one of the greatest films ever made. Four people recount different versions of the story of a man’s murder and the rape of his wife, which director Akira Kurosawa presents with striking imagery and an ingenious use of flashbacks. This eloquent masterwork and international sensation revolutionized film language and introduced Japanese cinema—and a commanding new star by the name of Toshiro Mifune—to the Western world.

SPECIAL FEATURES:
New digital restoration, with uncompressed monaural soundtrack on the Blu-ray edition
Audio commentary by Japanese-film historian Donald Richie
Video introduction by director Robert Altman
Excerpts from The World of Kazuo Miyagawa, a documentary on Rashomon’s cinematographer
A Testimony as an Image, a sixty-eight-minute documentary featuring interviews with cast and crew
Archival audio interview with actor Takashi Shimura
Original and rerelease trailers
New English subtitle translation
PLUS: A booklet featuring an essay by film historian Stephen Prince; an excerpt from director Akira Kurosawa’s Something Like an Autobiography; and reprints of Rashomon’s two source stories by Ryunosuke Akutagawa, “Rashomon” and “In a Grove”

MY TWO CENTS:
Calling this a masterpiece is an understatement, about time we get it on Blu. This release includes a new 68 minute documentary and a new audio interview with Takshi Shimura. 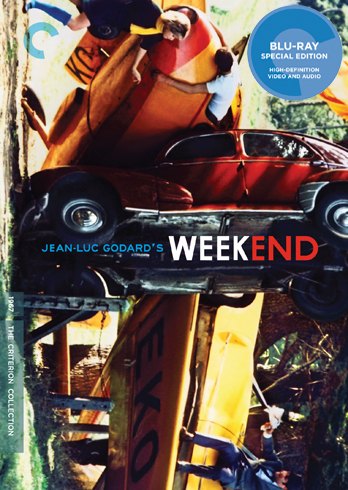 THE SKINNY FROM CRITERION:
This scathing late-sixties satire from Jean-Luc Godard is one of cinema’s great anarchic works. Determined to collect an inheritance from a dying relative, a bourgeois couple travel across the French countryside while civilization crashes and burns around them. Featuring a justly famous centerpiece sequence in which the camera tracks along a seemingly endless traffic jam, and rich with historical and literary references, Weekend is a surreally funny and disturbing call for revolution, a depiction of society retreating to savagery, and—according to the credits—the end of cinema itself.

MY TWO CENTS:
This flick gives the finger to traditional convention. There is a rambunctiousness here that I dig the hell out of. 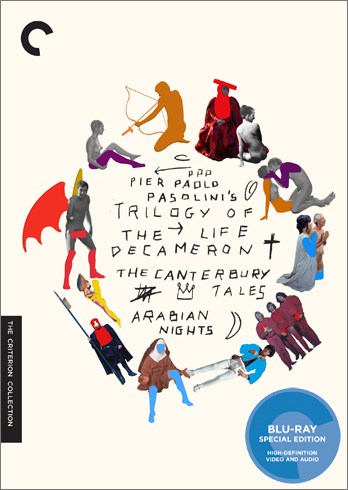 THE SKINNY FROM CRITERION:
In the early 1970s, the great Italian poet, philosopher, and filmmaker Pier Paolo Pasolini brought to the screen a trio of masterpieces of premodern world literature—Giovanni Boccaccio’s The Decameron, Geoffrey Chaucer’s The Canterbury Tales, and The Thousand and One Nights (often known as The Arabian Nights)—and in doing so created his most uninhibited and extravagant work, which he titled his Trilogy of Life. In this brazen and bawdy triptych, the director set out to challenge consumer capitalism and celebrate the uncorrupted human body while commenting on contemporary sexual and religious mores and hypocrisies. His scatological humor and rough-hewn sensuality leave all modern standards of decency behind; these are physical, provocative, and wildly entertaining films, all extraordinarily designed by Dante Ferretti and featuring evocative music by Ennio Morricone.

SPECIAL FEATURES:
New high-definition digital restorations of all three films, with uncompressed monaural soundtracks on the Blu-ray editions
New visual essays by film scholars Patrick Rumble and Tony Rayns on The Decameron andArabian Nights, respectively
New interviews with art director Dante Ferretti and composer Ennio Morricone about their work with Pasolini, and with film scholar Sam Rohdie on The Canterbury Tales
The Lost Body of Alibech (2005), a forty-five-minute documentary by Roberto Chiesi about a lost sequence from The Decameron
The Secret Humiliation of Chaucer (2006), a forty-seven-minute documentary by Chiesi about The Canterbury Tales
Via Pasolini, a documentary in which Pasolini discusses his views on language, film, and modern society
Pier Paolo Pasolini and the Form of the City (1974), a sixteen-minute documentary by Pasolini and Paolo Burnatto about the ancient Italian cities Orte and Sabaudia
Deleted scenes from Arabian Nights, with transcriptions of pages from the original script
Pasolini-approved English-dubbed track for The Canterbury Tales
Trailers
New English subtitle translations
PLUS: A booklet featuring essays by critic Colin MacCabe; Pasolini’s 1975 article “Trilogy of Life Rejected”; excerpts from Pasolini’s Berlin Film Festival press conference for The Canterbury Tales;and a report from the set of Arabian Nights by critic Gideon Bachmann

MY TWO CENTS:
I haven’t seen these flicks so I have no cents to spare. I could talk SALÒ all day long though. 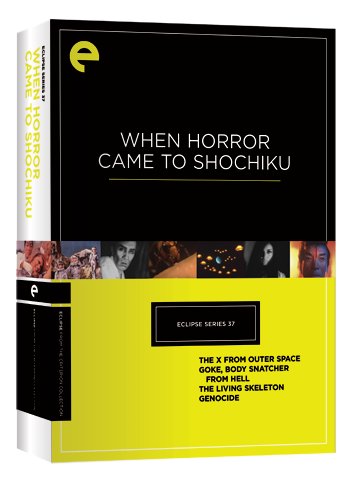 THE SKINNY FROM CRITERION:
Following years of a certain radioactive rubber beast’s domination of the box office, many Japanese studios tried to replicate the formula with their own brands of monster movies. One of the most fascinating dives into that fiendish deep end was the short-lived one from Shochiku, a studio better known for its elegant dramas by the likes of Kenji Mizoguchi and Yasujiro Ozu. In 1967 and 1968, the company created four certifiably batty, low-budget fantasies, tales haunted by watery ghosts, plagued by angry insects, and stalked by aliens—including one in the form of a giant chicken-lizard. Shochiku’s outrageous and oozy horror period shows a studio leaping into the unknown, even if only for one brief, bloody moment.

MY TWO CENTS:
None of these films are game changers the way GODZILLA was, but they each have their importance in the genre. Glad to see these getting the treatment they deserve. What a great year for Criterion and monsters. 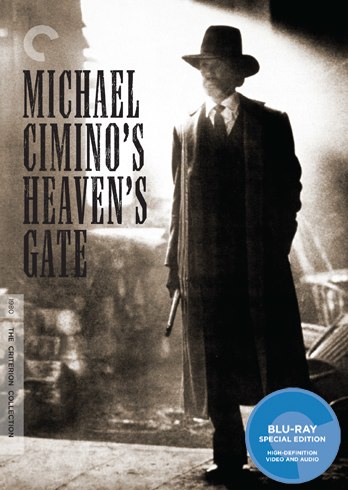 THE SKINNY FROM CRITERION:
A visionary critique of American expansionism, Heaven’s Gate, directed by Oscar winner Michael Cimino, is among Hollywood’s most ambitious and unorthodox epics. Kris Kristofferson brings his weathered sensuality to the role of a Harvard graduate who has relocated all the way to Wyoming as a federal marshal; there, he learns of a government-sanctioned plot by rich cattle barons to kill the area’s European settlers for their land. The resulting skirmish is based on the real-life bloody Johnson County War of 1892. Also starring Isabelle Huppert and Christopher Walken, Heaven’s Gate is a savage and ravishingly shot demystification of western movie lore. This is the full director’s cut, letting viewers today see Cimino’s potent original vision.

SPECIAL FEATURES:
New, restored transfer of director Michael Cimino’s cut of the film, supervised by Cimino
New restoration of the 5.1 surround soundtrack, supervised by Cimino, in DTS-HD Master Audio on the Blu-ray edition
New illustrated audio interview with Cimino and producer Joann Carelli
New interviews with actor Kris Kristofferson, soundtrack arranger and performer David Mansfield, and second assistant director Michael Stevenson
The Johnson County War, a video interview with historian Bill O’Neal about the real-life conflict that inspired the film, and its resonance in popular culture
Trailer and TV spots
PLUS: A booklet featuring an essay by critic and programmer Giulia D’Agnolo Vallan

MY TWO CENTS:
RASHOMON is the release of the month for me, but this good shit comes in a close second. This always felt very Monte Hellman-esque to me. It’s a remarkable film that got trashed by the critics. I actually wasn’t aware that opinion had changed much, major props to Criterion for taking this one on.

That’s it for this month, Bastards. We’ll talk more Criterion titles soon. Until then, time for some good ol’exploitation.