[Please note: this review of CULT OF THE COBRA was originally published in 2017. Please enjoy it in its newly revamped and resurrected form!]

CULT OF THE COBRA came amidst a waning period for behemoth in the genre film world. In the 1950s, Universal Studios finished out their great run of science fiction, fantasy, and horror pictures they’d been excelling at since the monumental releases of DRACULA and FRANKENSTEIN in 1931. The ’30s were mostly single monster movies—most of which went on to become classics—and the ’40s were mainly spent cranking out sequels starring different team-ups of their famed Universal Studios Monsters, but those horror icons were relegated to facing off against Abbott and Costello by the end of the decade. As the Atomic ’50s started, Universal rather admirably turned to a series of new monsters, which was probably a better idea than another monster rally picture by that point. 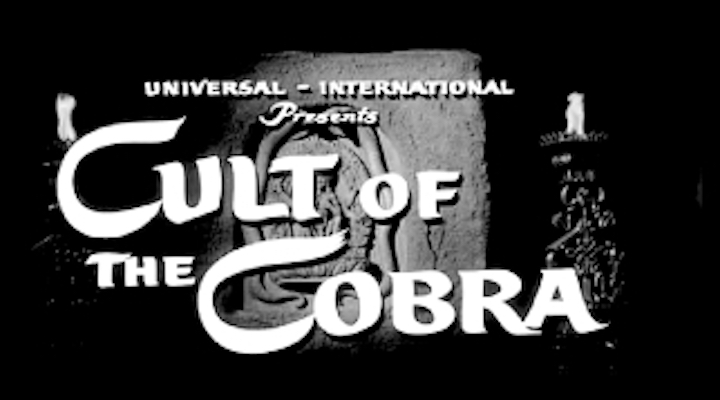 That brings us to 1955 and back to Universal-International released CULT OF THE COBRA, directed by Francis D. Lyons (1966’s CASTLE OF EVIL) and written by Jerry Davis, Cecil Maiden, and Richard Collins. The story gives us six servicemen—including Marshal Thompson (IT! THE TERROR FROM BEYOND SPACE), Richard Long (TV’s Nanny And The Professor), David Janssen (TV’s The Fugitive), and Jack Kelly (TV’s Maverick)—stationed in Asia in 1945 and looking for some kicks as World War II nears its end. They hear tell of a local cult who worship snakes and are even legendarily able to transform into these serpents. One well placed bribe later and the sextet find themselves dudded up in robes and watching one of the cult’s rituals, warned to keep a low profile or face possible death. 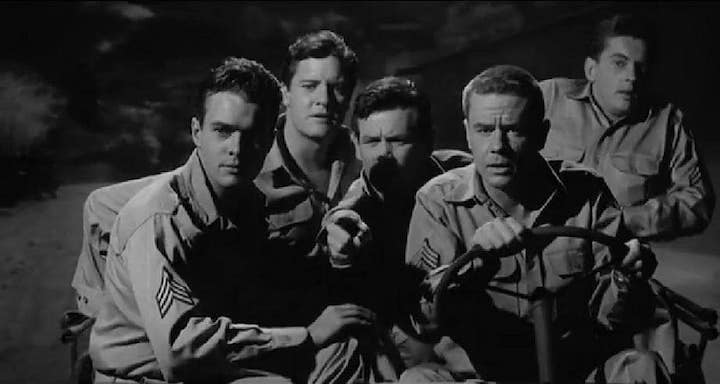 The ritual itself seems to consist more of variety show dancing than snake transformations, but finally there is a snake on a string that comes out of the same woven basket a woman crawled into. It’s not much different than a bad Las Vegas magic show, but that doesn’t stop the dumbest member of the group whipping out his trusty camera, which of course is the size of a lunch box and is equipped with a giant flash bulb. 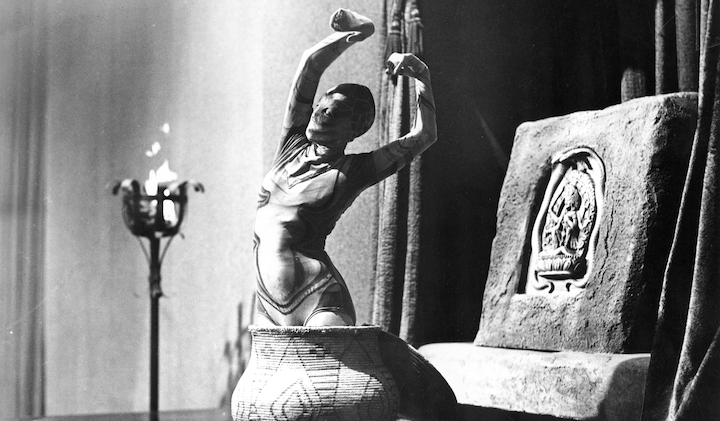 Sure enough, this causes no end of consternation among the cultists, and CULT OF THE COBRA‘s biggest surprise occurs when the boys are summarily cursed by none other than Get Smart‘s Chief of Control himself—Ed Platt. 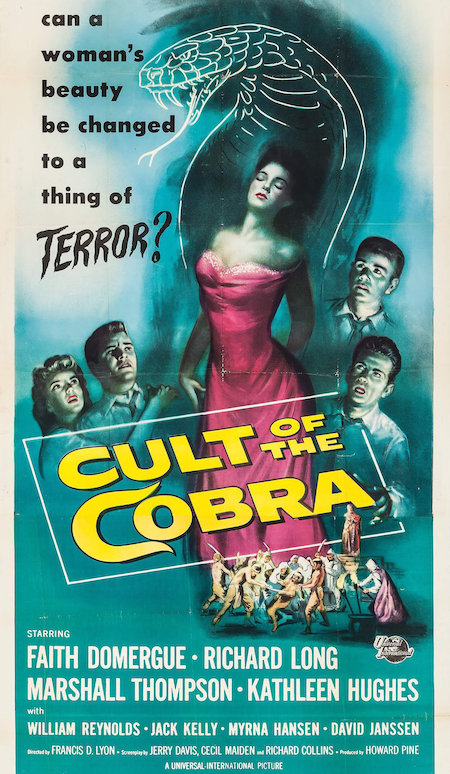 One guy runs away a bit faster than the others, and he is soon found snakebit outside the cult’s clubhouse. Luckily this doesn’t kill him, but a second run-in with a snaky shadow in his hospital room sends him to the Great Beyond. Wow, that’s just like what Ed Platt said…but the rest of the boys have to get packed to head home, so lah-di-da. 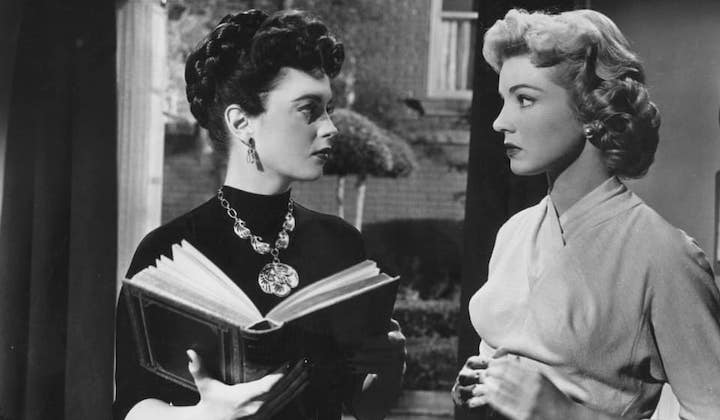 Back in America, the guys are getting back to their lives, with Long and Thompson rooming with each other and fighting over the winsome Julia (Kathleen Hughes, IT CAME FROM OUTER SPACE). Just as Julia decides to go “Long,” Faith Domergue (THIS ISLAND EARTH) shows up as a mystery woman and new girlfriend for Thompson. Shortly after, the boys find themselves facing off against that same snaky shadow, now backed up with low level snake-eye camera shots. Although the deaths seem to be accidents (car crash, fall off a balcony) only Long notices the bite marks seeping deadly cobra venom… 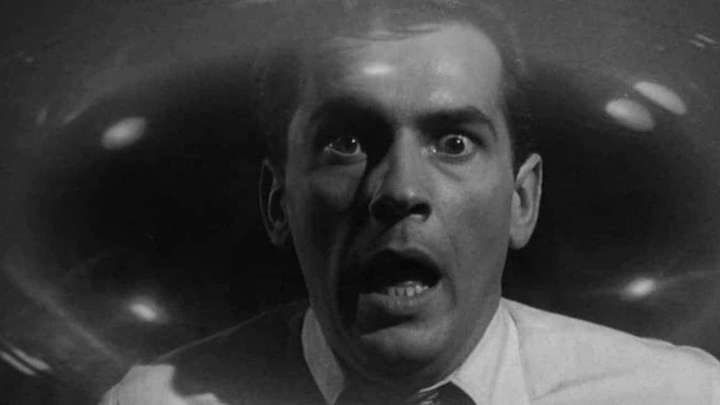 What is Domergue’s secret, and will Long be able to convince Thompson she’s not what she seems? Or will Thompson assume Long is just c-blocking him again after winning over Julia? The answers await those brave enough to face…The Cult of the Cobra! 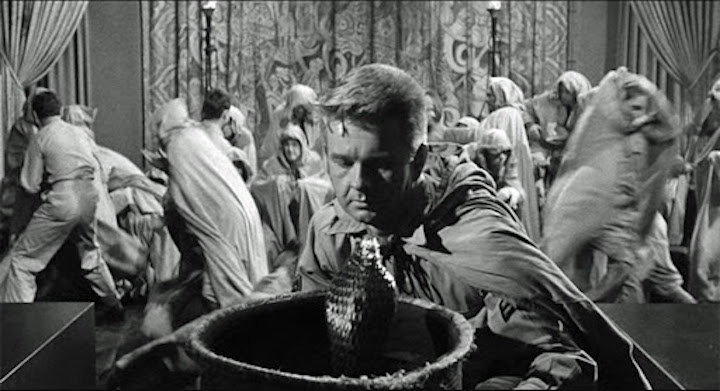 CULT OF THE COBRA is not a bad little flick, helped immensely by the presence of familiar faces like Long, Kelly, and Janssen. Top billed Domergue is okay—a little too conflicted in her mission perhaps; it might have been more fun if she took more delight in her evil misdeeds, but that’s a quibble. The film is also a little light on monster action, as we only get a few shots of that String Cobra, er, I mean, King Cobra, in action, mainly making do with the aforementioned snake shadow and snake-eye camera. 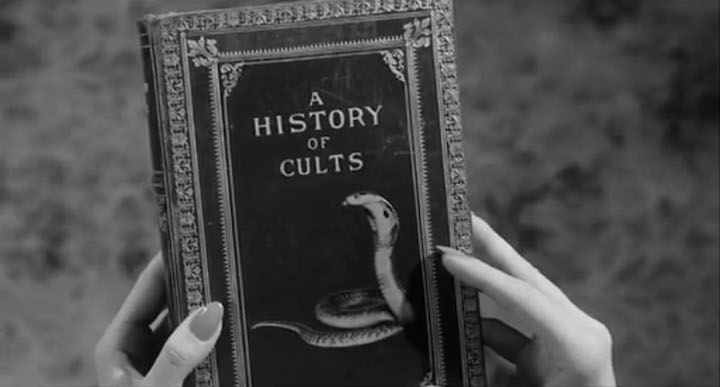 But it’s fun in that ’50s horror movie way, with almost nobody working any kind of visible job—Hughes is in some kind of show, and Janssen runs a bowling alley back in the states, but the rest just hang out, drinking and smoking and not worrying about death curses. For that alone, this one gets a recommendation, just keep the anti-snake venom serum handy!