I love when a filmmaker’s ambition outpaces their skills or resources. The collision of weird tones that results sometimes creates something truly unwatchable, but at other times, the result is a piece of outsider art that causes the viewer’s brain to nearly break as it tries to process what is on the screen. Such is the case with WICKED WORLD. Writer/producer/actor/director Barry J. Gillis has attempted to create a vision of Hell on Earth with misplaced overtones of moral outrage, meta self-commentary, and the shallow, unearned nihilism of a suburban middle school loner who writes short stories about how much everyone and everything sucks. 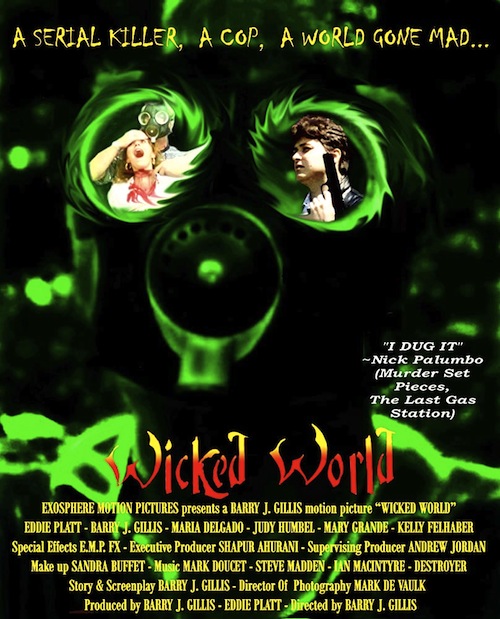 Shot over a year of weekends in 1991 (but more or less unreleased until now), WICKED WORLD is put together like a jigsaw puzzle where the pieces were cut or bent to force them together even though they did not fit. It takes several vignettes of murder and mayhem committed by random psychos and criminals before a semi-experimental narrative forms about a middle-aged serial killer (Eddie Platt) recalling his murderous exploits from a wheelchair as a seemingly somnambulistic nurse pushes him around. But which of the murders actually occurred and which ones are simply in the imagination of the brain-damaged killer? Should you care? Not really.

WICKED WORLD is essentially nothing but a series of gratuitous killings, naked women in shower scenes, and suicides. That makes it no different from any other number of no-budget exploitation flicks going back fifty years. Where it threatens to become provocative is in the way Gillis sets the film up as its own defense against catering to the basest of viewer tastes for bloody violence and ogling naked women. By constantly coming back to the idea that the killer is actually only imagining these scenarios (inspired by bloody horror movies, for that added bit of attempted self-critique) where he violently cleanses the world of criminals and “degenerates” who dare to have sex and party, the flick is only one Old Testament quote away from becoming a Christian scare film. 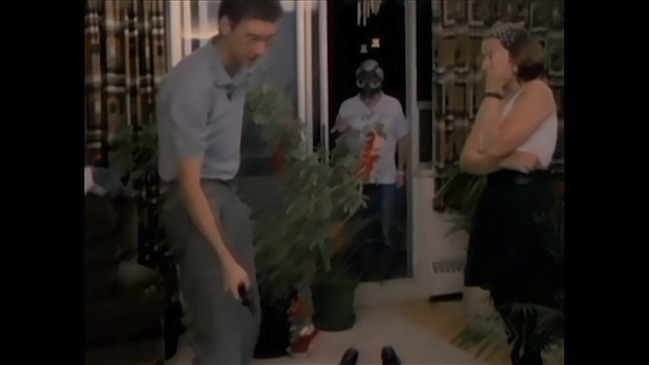 To Gillis’ credit, he seems to realize that this approach becomes repetitive by the forty-five minute mark and inserts a new main character into the film in the person of a murderous former cop (Gillis) whose girlfriend was murdered by the killer (Or was she?). But this turn just twists the movie into even more of a nihilistic screed of sex and violence hiding behind a supposedly moralistic façade.

In the behind-the-scenes footage on this new Blu-ray from Bleeding Skull and AGFA, Gillis even describes the movie as being a redemption story about a corrupt cop finding his morality. I am not sure if that is what the movie started out to be and was lost somewhere in the shooting and editing or if Gillis actually believes that WICKED WORLD delivers on that description. Personally, I hope he was just being a savvy exploitation filmmaker, offering up an excuse for his film that he knows is bullshit and that might earn it a few more rentals from controversy.

As amateurishly put together as WICKED WORLD is with its tin-eared dialogue, cheap sound, and slapdash editing, that collision of technical incompetence with Gillis’ combination of avant-garde pretentiousness and exploitation hucksterism is what makes the flick weirdly funny and nearly hypnotic at times. I don’t know if I would consider that an endorsement, but I was never bored and was able to turn Gillis’ odd fever dream of a movie into a game of trying to figure out when it was being purposely funny and when it accidentally inspired a burst of laughter. That tension of what is and is not intended is the basis for all good outsider art. Fortunately for WICKED WORLD, it is nearly impossible to give a concrete opinion in this sort of gray area, so I’m giving it the benefit of the doubt since I was always engaged with it, even if I’m not sure it was for the right reasons. 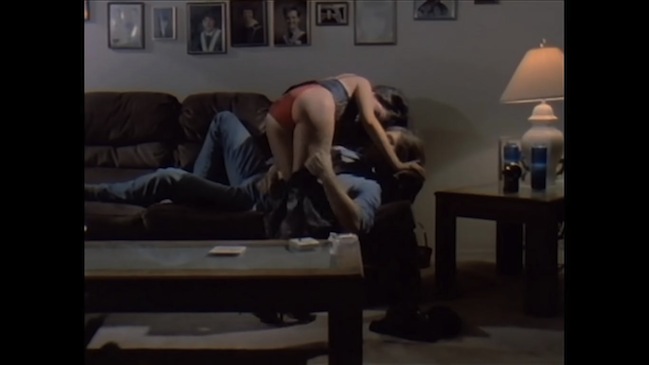 REALITY: BEHIND THE SCENES OF WICKED WORLD is the most interesting bonus feature included here. Platt is credited as the director and it appears he shot much of the grainy old camcorder footage. For the most part, it is your standard behind-the-scenes piece as Platt interviews nearly every cast member and captures candid footage of the production in action. What sets REALITY apart is that Gillis edited the footage together (it’s never stated, but I’m guessing it was recently) and seems to go out of his way to present himself in the worst light possible. His direction seems to consist of the two extremes of mumbling vague instructions to his cast and crew and exploding at people in foul-mouthed tirades. Given Gillis’ penchant for old school exploitation hucksterism, I find myself wondering how much of the footage was edited to create a false narrative for controversy.

The disc is rounded out with a sincerely nice tribute piece to the late Platt (he passed away between the end of production and this long overdue release) presented by his son and a music video directed by Gillis for a hair metal band called Marshall Law (their music is included in the film). 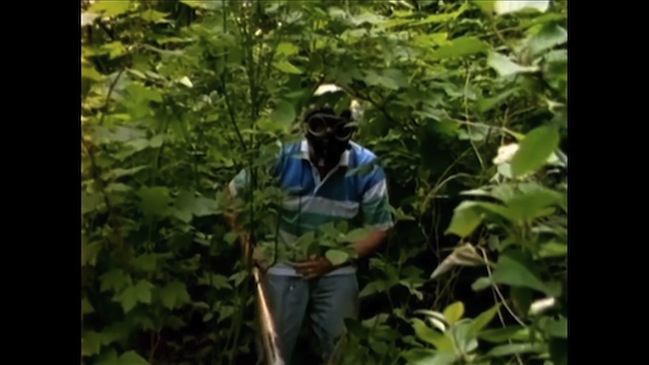 Depending on your mileage, WICKED WORLD can either be seen as pointless, rambling, and shoddily made or it could be seen as a personal, oddball art flick hampered by a lack of technical skill. I see it a little more as the latter. Its shallow attempts at meta self-commentary give it just enough of a smirking, silly faux-intellectualism that I find it worthwhile.