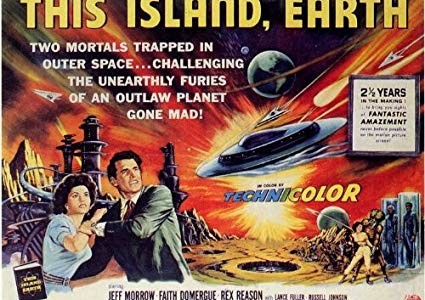 By the early ‘50s there had been a few movies where an alien from another world had come to Earth. There were also a handful of shows where an Earthling took the audience on a trip to another world–most notably Flash Gordon, who had taken viewers to Mongo and Mars in two different serials in the ‘30s and ‘40s. But it was producer William Alland and director Joseph Newman who decided to take audiences on the most spectacular voyage to an alien planet that had ever been seen. Under the production umbrella of Universal-International they went into production on 1955’s THIS ISLAND EARTH, the biggest epic science fiction movie ever made up to the time.

The first thing Alland did was to approach Universal to loosen the purse strings a little. He’d already produced several fine low budget science fiction pictures for them in black and white, but this time he wanted more money to make this movie in color and to provide more production value. Seeing the success of Paramount’s 1953 color science fiction film THE WAR OF THE WORLDS, Universal agreed, and THIS ISLAND EARTH was underway.

Dr. Cal Meacham (Rex Reason) is a scientific adventurer. It’s amusing that just a few years later scientists in movies became generally nerdy milquetoast types. But in the ‘50s, and especially in Universal’s sci-fi movies, scientists are always smart, two-fisted he-men. So Cal is brilliant and brave. Who better to fly the new experimental jet he helped develop? While in the air the jet develops a fault and things begin to look very bad for Cal. Then a mysterious green light envelops his plane and lands it safely. While Cal ponders this, he is contacted by a strange man named Exeter (Jeff Morrow). Exeter sends Cal and his assistant the parts for something he calls an Interociter. Exeter challenges Cal to build the machine. Cal accepts and soon has a working Interociter in his lab. 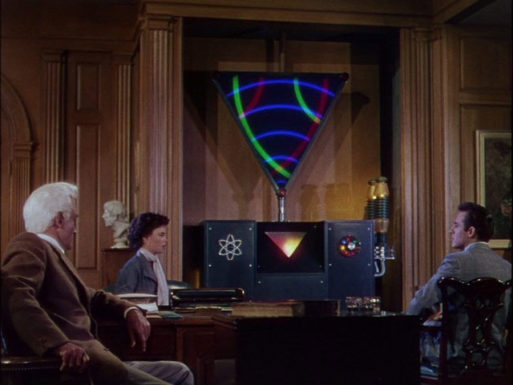 Turns out an Interociter is Skype–50’s Style. Exeter (who appears to be a middle aged man with snow white hair and a curiously high forehead) praises Cal for his scientific know-how and then makes his second offer. Having proven himself an exceptionally intelligent scientist, Exeter wants Cal to join his think tank to “solve war.” Intrigued, Dr. Meacham takes him up on this offer too and the next day finds himself flying somewhere in a robot plane (!).

Upon landing, Cal discovers two things: he’s in Georgia, and Exeter has also recruited Dr. Ruth Adams (Faith Domergue), who is as pretty as she is intelligent. They go to Exeter’s mansion and Cal is introduced to Exeter and his assistant Brack (Lance Fuller)–another flaxen haired gent with a high forehead–and several other background scientists. The only one to catch our eye is the familiar face of Russell Johnson, but sadly he’s not playing Professor Roy Hinkley here, instead he’s Dr. Steve Carlson. 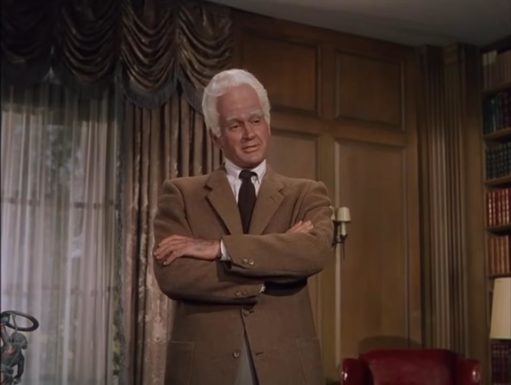 The scientists are excited at the work Exeter presents them, but disquieted by several things about the setup; most notably, the feeling that they are prisoners. After much discussion and scienceing under Exeter’s and the increasingly hostile Brack’s watchful eyes, the scientists engineer an escape. Now the hosts’ alien origins are revealed as they pursue in a flying saucer (!). The escape is thwarted, and Carlson is killed. Cal and Ruth are taken on board the saucer and it takes off for outer space!

Along the way Exeter tells the humans that his home planet Metaluna has been at war with the planet Zagon for decades, but Metaluna cannot take much more, and if the humans can’t help the aliens with new weapons or a way to stop the Zagons, the Metalunans are doomed. But Cal and Ruth have the distinct feeling that upon solving the Metalunans’ problems they will become highly expendable so far from home.

Watching the trailer for THIS ISLAND EARTH would make any sci-fi fan’s heart skip a beat. Spectacular special visual effects abound as the viewer watches death rays, colorful explosions, meteor bombardments, and spaceships zipping through space. And then there’s the Metaluna Mutant–a big, bug eyed insect man geared to make everyone in the audience shriek with fear and delight. 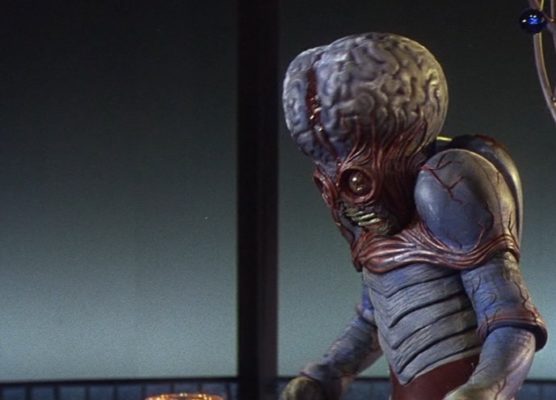 What a pity it is, then, that all of that amazing stuff is quite literally stuffed into the last twenty to twenty-five minutes of THIS ISLAND EARTH. I totally understand that the budget wouldn’t support that level of effects throughout the 86 minute runtime. And you can see the budget being extravagant in some scenes (the experimental jet is real, not a miniature) but then skimpy in others (for some reason, in the final space scenes, the wires holding everything up start showing a lot more) Surely there could have been ways to spread the effects buffet out and keep everything at the same level of competence.

Storywise, the first hour of THIS ISLAND EARTH starts off well, but by the time the heroic trio finally makes their run for the border (in a cool Woody) the viewer finds himself sighing a lot waiting for the good stuff to start. And don’t get me started on the Mutant, who only pops up for a couple of scenes even though he is one of my favorite alien monsters from that decade. It’s just not enough, though, especially when Universal features him so prominently in the movie’s ads, poster, and trailer. It’s a lot like when Paramount told us Jason Voorhees was going to take Manhattan–but then only let him get to NYC in the last 20 minutes of that movie, spending the bulk of the runtime on a cruise ship. 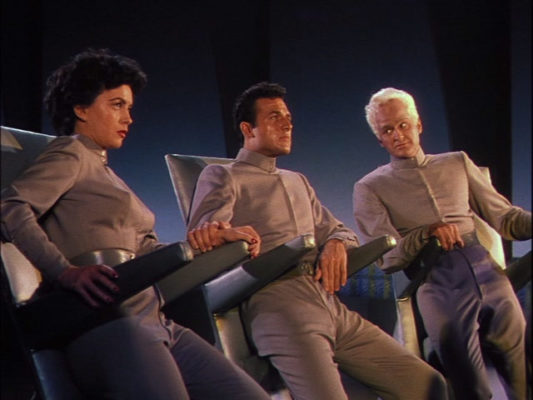 So while THIS ISLAND EARTH is still cool and worth a watch, it is not, to me, one of the essential ‘50s science fiction movies. Thankfully, the Blu-ray from Scream Factory is packed, so there’s plenty here to enjoy beyond the movie.

The movie looks excellent, with a clear and vibrant picture showing off the gorgeous color compositions from cinematographer Clifford Stine. This presentation is 1:85:1 and looks fantastic. There are not really any night scenes, but the blacks of the space scenes are deep and clear. The disc gives two options for sound: a solid mix for a standard stereo set up, but also a second soundtrack approximating the movie’s use of a ‘50s sound process called Spectra Stereo, but it requires a specific 5.1 setup to hear and I don’t have it, so no idea how it sounds. There is a ten minute featurette on Spectra Stereo in the extras though, consisting of articles of the time that you can pause and read.

Staying with the audio options, there are also two commentaries available. The first is by Robert Skotak, a visual effects artist who got his start with Roger Corman in the ‘80s. His commentary is good, but doesn’t cover the wide range as did Tom Weaver’s on the TARANTULA Blu-ray. Still, it’s a good listen. The two best factoids from this commentary reveal that Exeter’s house is the same house Leo G. Carroll owned in Tarantula and is also the same house owned by this movie’s Rex Reason in THE CREATURE WALKS AMONG US. The other cool bit involves the poor guy in the Metaluna Mutant costume. Shooting his scenes while temperatures outside the soundstage topped 100 degrees, there is a moment when you can see just how hot he was in the costume onscreen. I’ll leave the rest of that for you to discover on the disc. The second commentary is by David Schechter, who is a music expert. He goes VERY in depth on the score, pointing out the various bits from several composers beyond the one credited onscreen. The funny thing about this commentary, though, is that it abruptly ends at the half hour mark in the movie. Schechter thanks the listener for their attention and signs off. I’m not sure why Scream Factory didn’t combine his 30 minutes with 56 minutes of someone else chatting about the movie, but they didn’t, and nothing on the disc mentions the second commentary only running for a third of the movie. 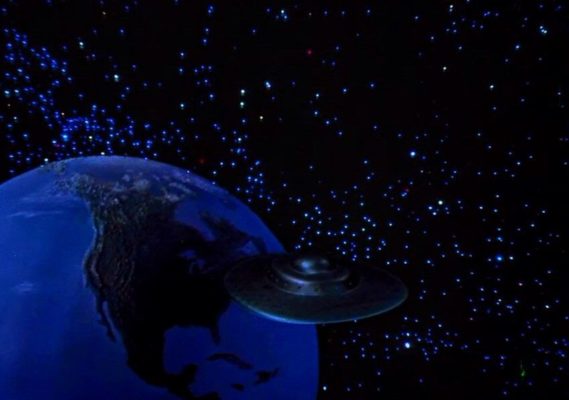 Other special features include the movie again, this time in open matte 1:37:1. This presentation is therefore full frame which is how most people watched it on television as kids. I didn’t watch the whole thing like this, but it does not appear to be quite as cleaned up as the main presentation. I saw some pops and flaws in the few minutes I watched.

You get an expanded 47-minute making of documentary that was originally made in 2013 at forty minutes. Several filmmakers and film historians chime in, including the always welcome C. Courtney Joyner, the hilariously acerbic Ted Newsom, Joe Dante, Bob Burns, and a camera shy Tom Weaver who is only heard and not seen. They go over every aspect of the production thoroughly. You also get on camera appearances by Robert Skotak and David Schecter here. This is a very fun watch.

Continuing the inventory of special features: Italian filmmaker Luigi Cozzi is interviewed about the movie in a 21-minute feature by himself; Joe Dante presents his commentary over the movie’s trailer from his “Trailers from Hell” website; you get a presentation of both the 3 minute Castle Films edit of the movie for 8mm home projectors and also the nine-minute deluxe 8mm edit with sound. Rounding out the disc is the trailer again (without Dante) and three still galleries.

While THIS ISLAND EARTH is a slow burn with a great payoff in the third act, this special edition is loaded to the gills. So I’d say pick this one up if you’re already a fan or if you enjoy copious special features that might outstrip the movie they support.

The Scream Factory Blu-ray of THIS ISLAND EARTH will be available on Tuesday, July 9th, 2019. 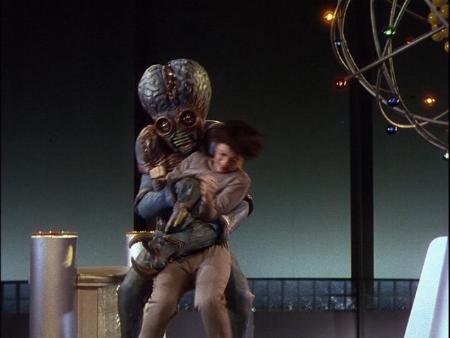