The first movie I ever remember scaring the crap out of me was POLTERGEIST (1982). This film was the first major mainstream haunted house film to frighten the pants off audiences in a wide release. The top-notch team of director Tobe Hooper (THE TEXAS CHAINSAW MASSACRE) and writer Steven Spielberg (CLOSE ENCOUNTERS OF THE THIRD KIND) made POLTERGEIST a grand slam horror phenomenon.

It’s a great feeling to see horror-centric clothing company Cavity Colors paying homage to this supernatural classic. To see their POLTERGEIST collection gives me retro feels that I can’t get over. They’ve come up with so much cool gear that it is just a must-have for every horror fan. I am absolutely living for this! 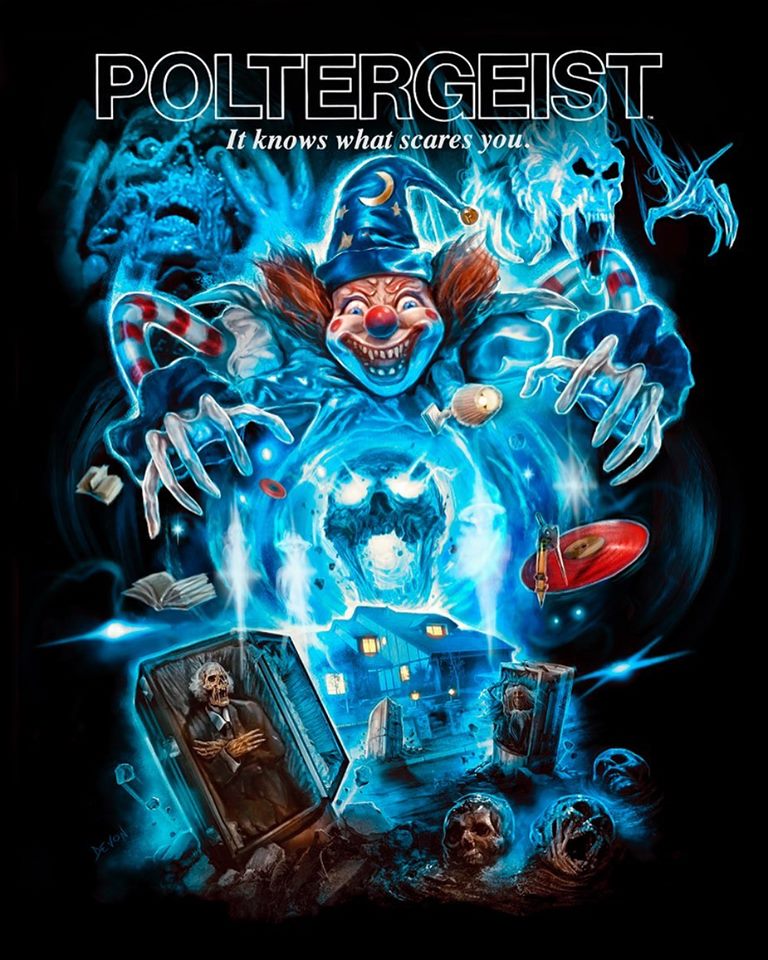 Cavity Colors has once again enlisted the ultra-talented artistry of Devon Whitehead (a.k.a. Devon Draws on social media). Besides Cavity Colors’ apparel, Devon’s super-realistic art, with its extreme attention to detail, can be found everywhere, from the covers of Scream Factory Blu-Ray releases (THE GREEN INFERNO), HorrorHound magazine (the MARS ATTACKS! issue), and even the Slashback Video promotional poster.

This time, Devon has truly outdone himself. He’s taken the most terrifying images from POLTERGEIST, including the toy clown, the terrifying apparitions, Craig T. Nelson’s skinless face, the objects from the children’s room swirling around, and all the decomposing bodies popping out of the ground into one beautifully grotesque design. 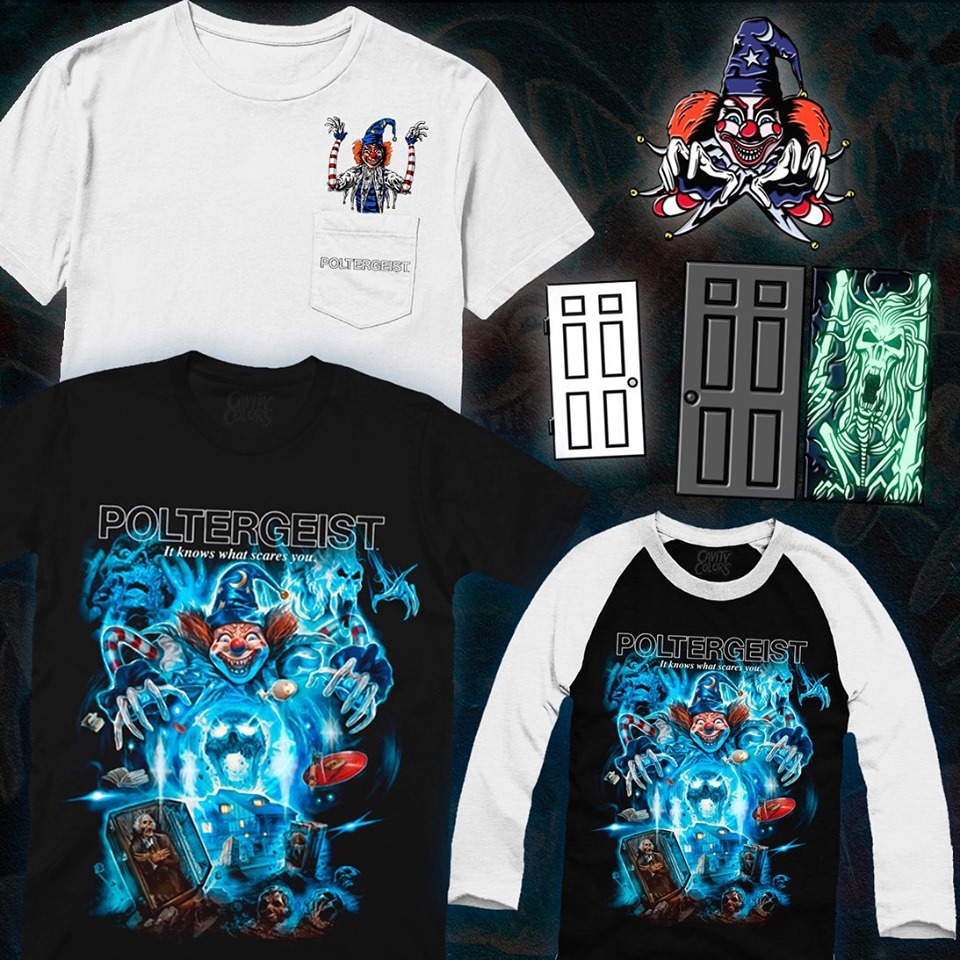 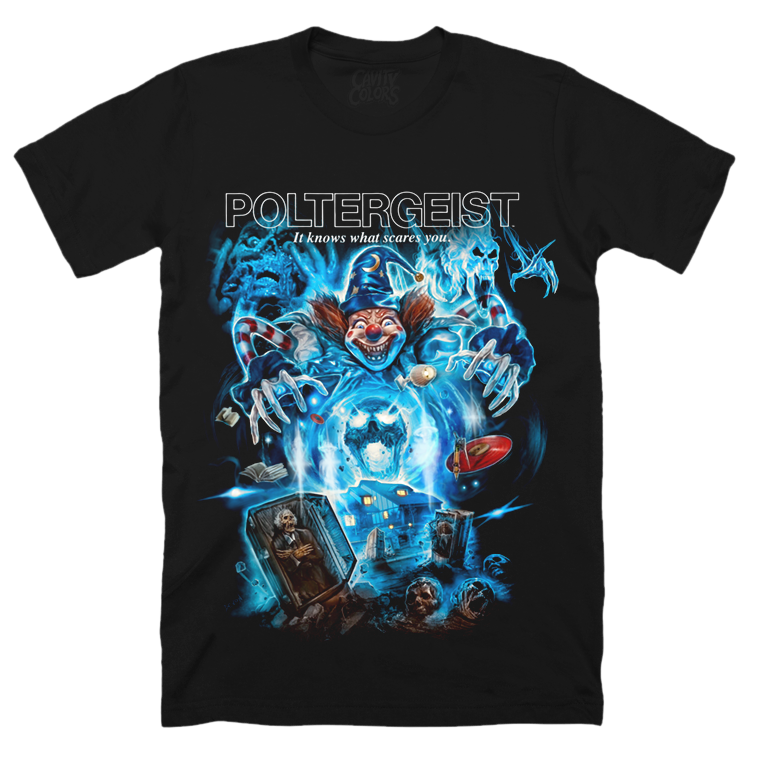 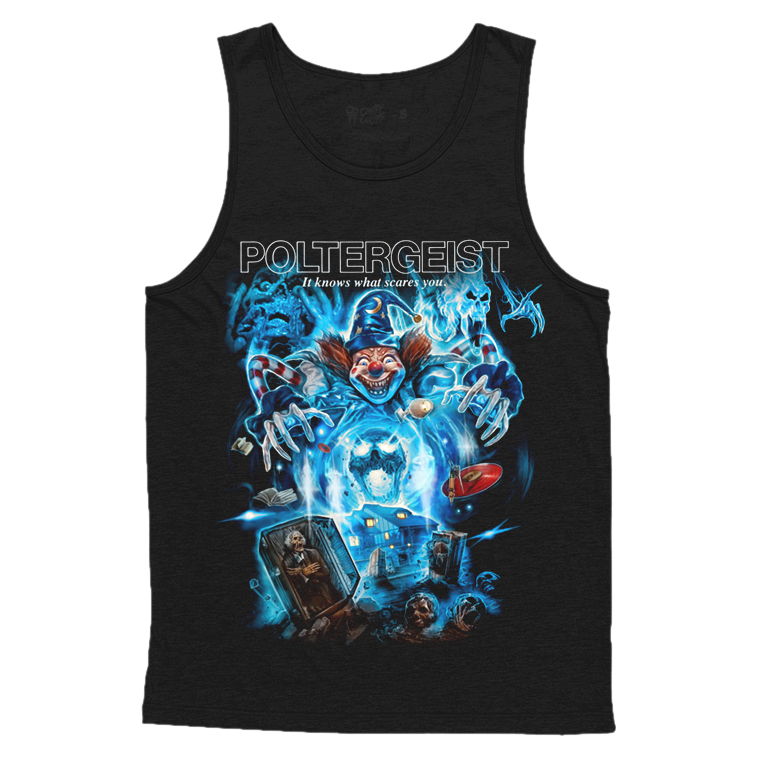 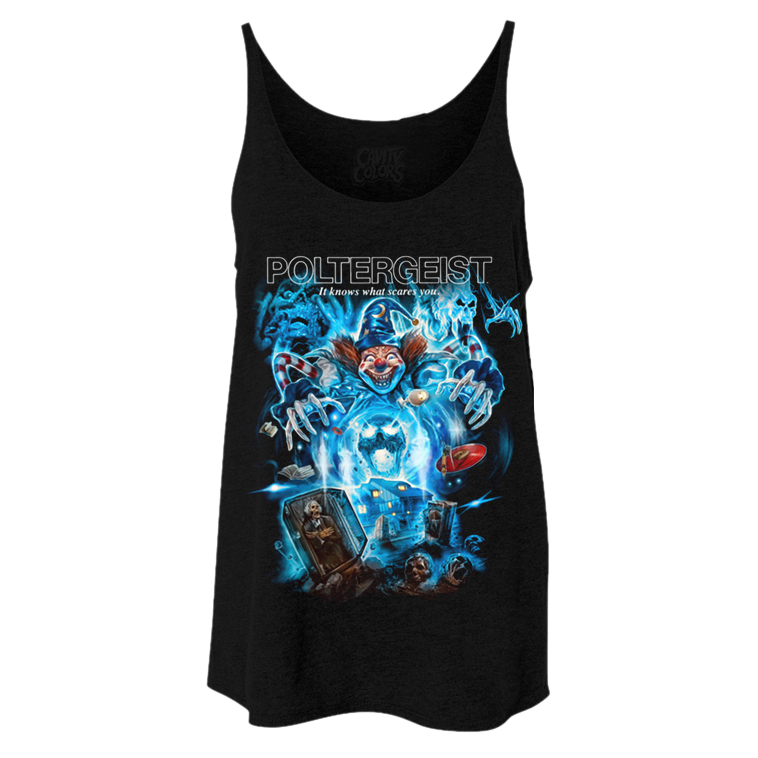 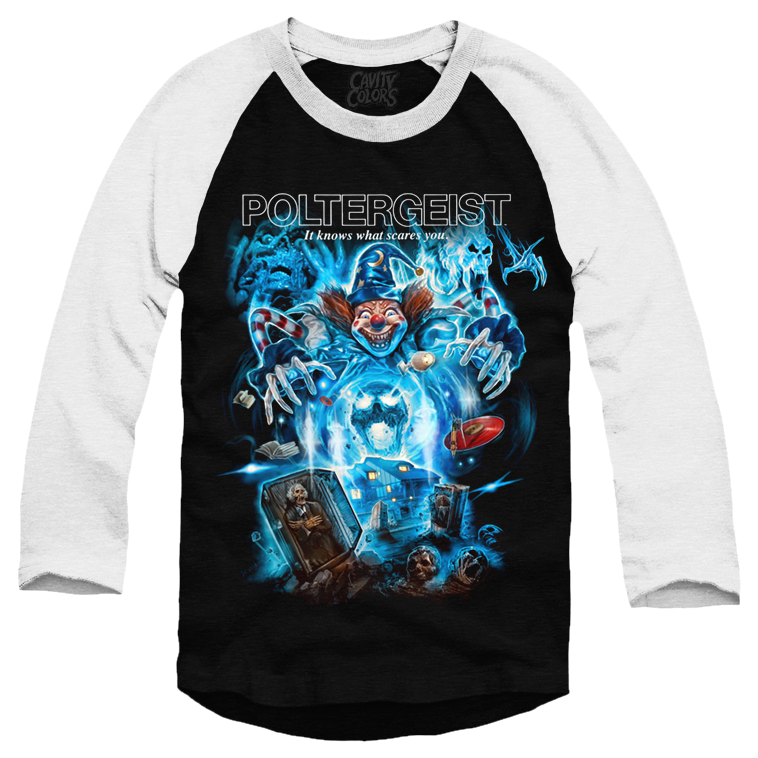 This design is officially licensed — no bootleg shit here — and it’s featured on 100% cotton, unisex T-shirts, slouchy woman’s tank tops, baseball shirts with contrasting colored collar and sleeves, and a unisex tank top. All apparel comes with a printed size and logo, so no need for a scratchy tag on the back of your neck. 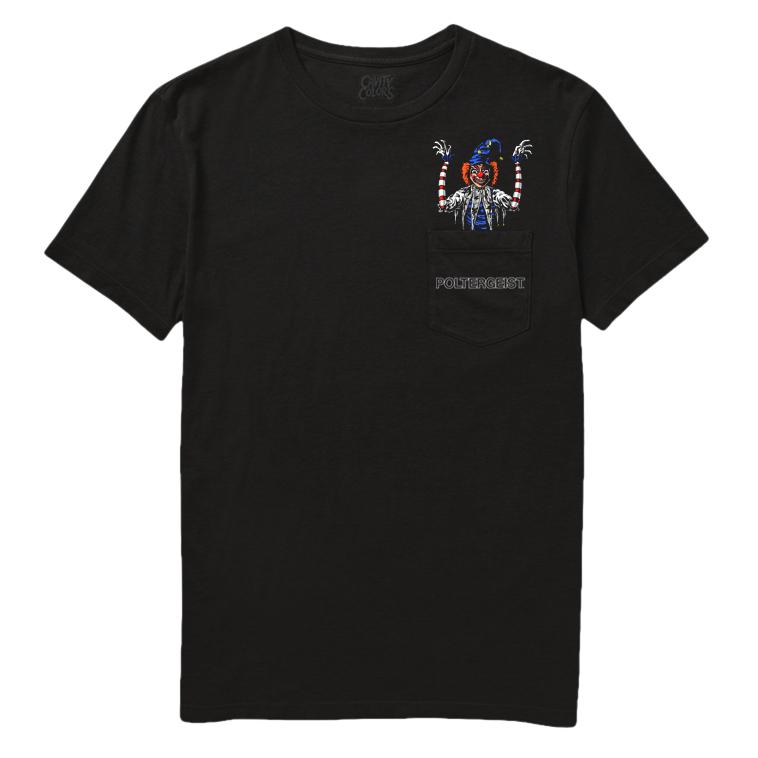 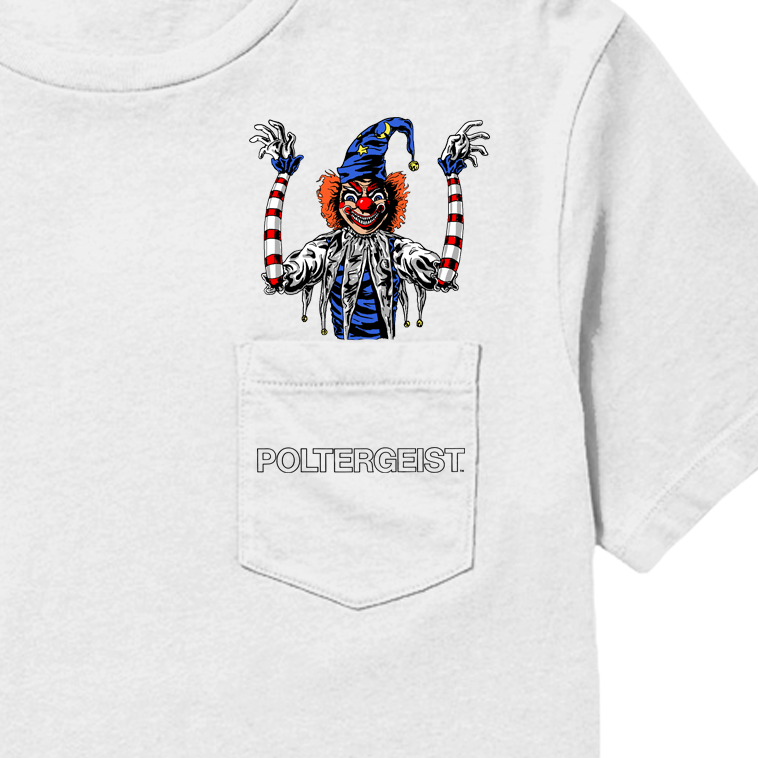 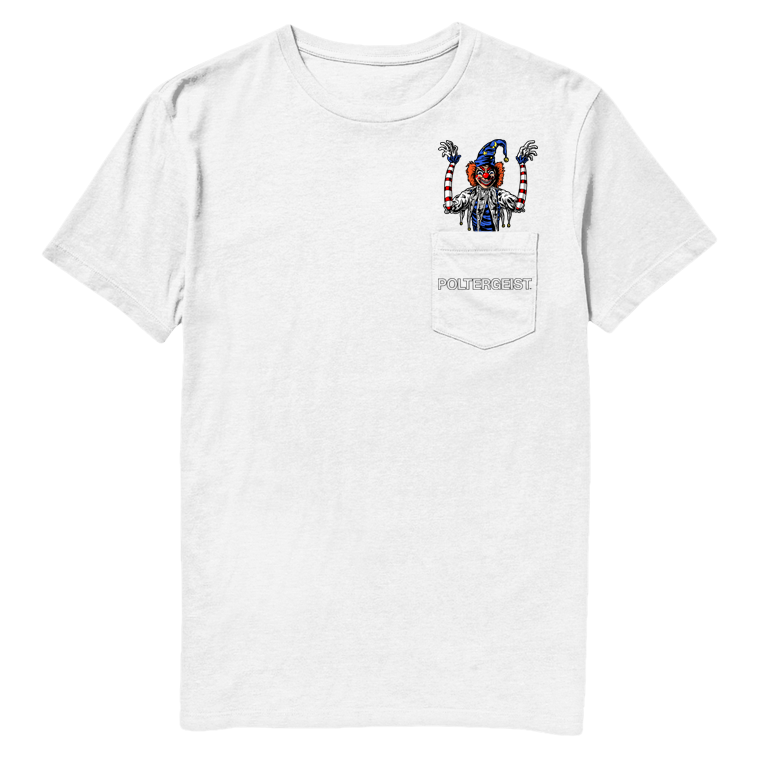 If that wasn’t enough on the fright fashion front, Cavity Colors is also offering a ’90s vintage look with left upper pocket T-shirt with the iconic POLTERGEIST clown poking out of the pocket. This shirt is available in black and white, 100% cotton, and also has a printed tag/logo. The art is by Hillary White. Hillary is most well known for her reinterpretation of pop-culture iconography.  Many of her designs can be found on apparel through THREADLESS, SOCIETY6, and REDBUBBLE. 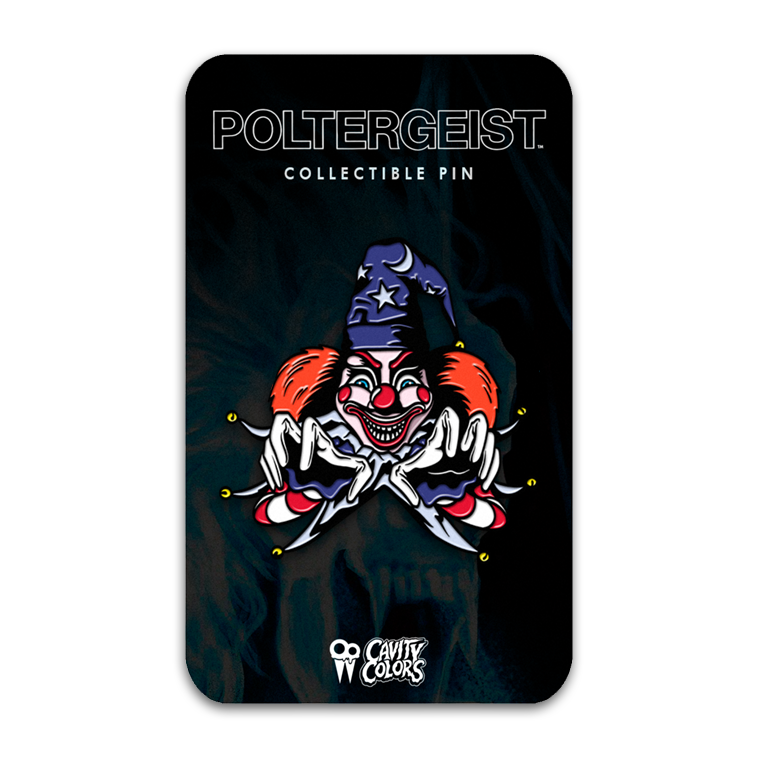 What’s a horror collection without at least a couple enamel pins? Cavity Colors has included two new designs. The first one is titled “Open the door, reveal the beast.” This enamel pin has a real working door that has an evil spirit hiding behind it. Oh, and it glows in the dark. 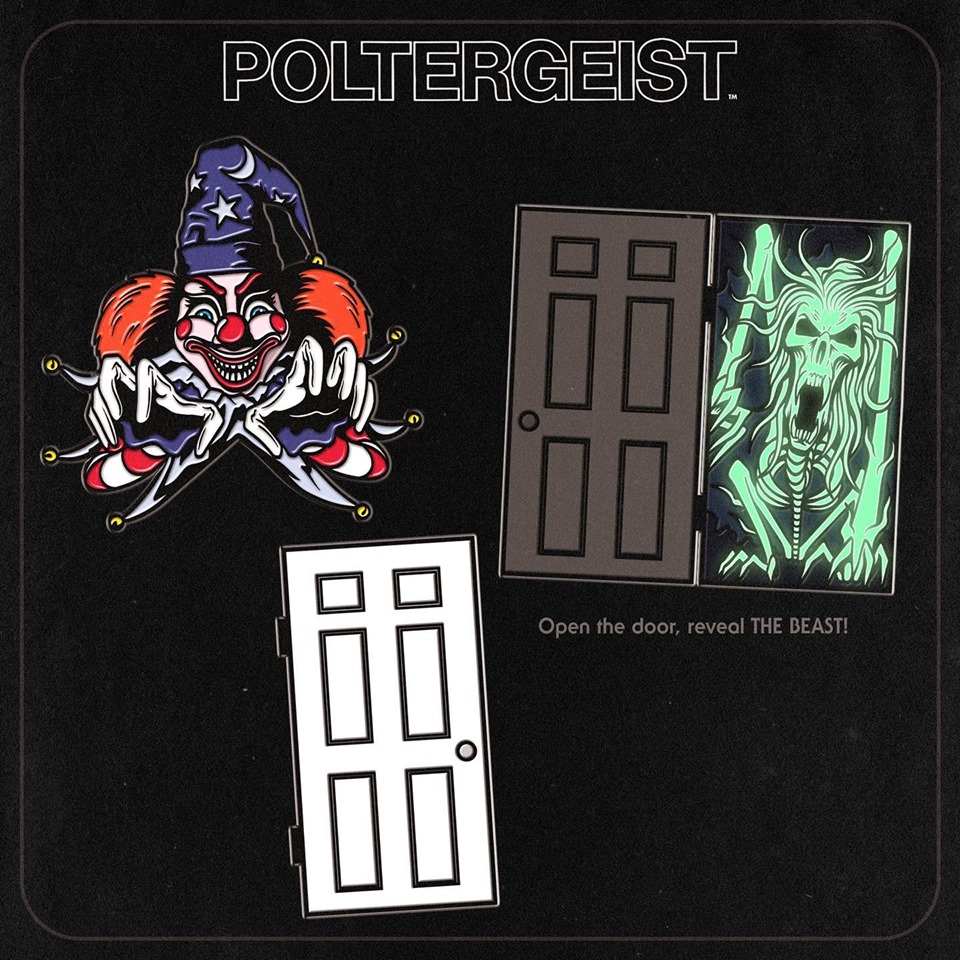 The next enamel pin design is once again the iconic POLTERGEIST clown. Both pins are a soft enamel with a shiny black metal finish, and a double rubber clutch for secure attachment. Both pins were designed by artist Nacho Scratcho. Nacho is mostly known for his subversion of punk rock and cult movie imagery.

As Cavity Colors celebrates the 1982 horror classic POLTERGEIST, so should you. Go to cavitycolors.com and shop ‘til you drop. Just remember it knows what scares you, but don’t let that frighten you away from being fashion forward. This is your old pal Germ T. Ripper sayin’… “Love fashion, hate fascism.” Tell ‘em DAILY GRINDHOUSE sent ya, and as always stay DRESEED TO KILL!