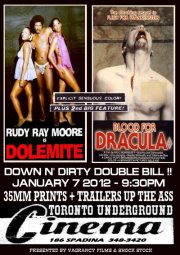 On January 7, 2012 the wonderful folks at Vagrancy Pictures once again took over Toronto’s top repertory theater The Toronto Underground Cinema to present a very special double-feature.

Actually, it might be one of the oddest double-features to ever play the city. Titled DOLEMITE VS. DRACULA – A CINEMATIC BLOOD FEST – Toronto audiences would be treated to both Rudy Ray Moore’s gonzo blaxploitation classic DOLEMITE, as well as Paul Morrissey’s no-less strange, though certainly more polished, BLOOD FOR DRACULA (also known as ANDY WARHOL’S DRACULA). It was a Grindhouse extravaganza for the ages, and one that I was unreasonably excited for.

You see, I first discovered DOLEMITE as a teenager, and it immediately enraptured me. The film is a force of nature, propelled by the larger than life personality of its star. It’s also incredibly poorly made, with incoherent editing, incompetent acting, and a constant stream of boom mics, flubbed lines and surrealistic subject matter. But it’s also a massively entertaining and important film – eminently quotable, while holding up beautifully to repeated viewings. As I matured (so to speak), I ended up viewing it dozens of times, eventually moving on to its sequel (THE HUMAN TORNADO), as well as Rudy Ray Moore’s other films and comedy albums. But while some of those other films are entertaining in their own right, I would always return to DOLEMITE. It’s so un-self conscious. So unaware. So perfect. The opportunity to see it projected on the big screen is simply something I couldn’t miss, so I made the long trip to Toronto to take it in. 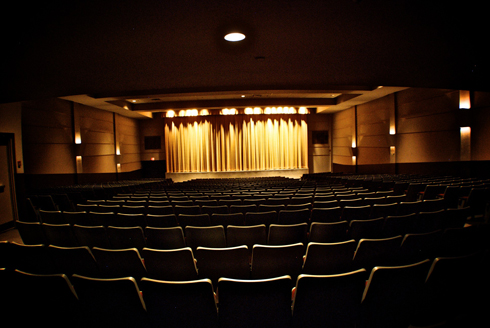 Now, the Toronto Underground Cinema is an absolutely gorgeous venue, and an ideal viewing location for any fan of genre or exploitation cinema. Originally known as Golden Classics, the theater opened in 1977 and specialized in showing kung-fu films, before changing tastes forced it to close in the early 90s. Since then there had been several attempts to revive the location, nestled rather surprisingly beneath a condo “mall” on Spadina Avenue in Toronto, before Nigel Agnew and Alex Woodside, former managers and personalities from the venerable Bloor Cinema (now the Bloor Hot Docs Cinema), teamed up with filmmaker Charlie Lawton a couple of years back to rebuild – and rebrand – the theater into the primary location in Toronto for cult and underground films.

In fact, when you enter the building you might be entirely surprised to discover there’s a theater nearby, as it appears to be solely a location for office furniture storage. But the location lives up to its name, as when you wander by the vacated storage depots and abandoned stores you eventually come to a set of stairs the lead you directly to film VALHALLA. It’s a bit like stepping into the past, and the enthusiasm that the staff has for its work – and the films being shown – shines through in every aspect of how the place is operated. These are film fans, and sometimes that means showing films that are beyond niche – where you can never be quite sure if an audience will actually attend.

Luckily there were few worries there, as the two films brought out an enthusiastic group of individuals perfectly in tune with its pleasingly strange and mad-cap tone.

After a raucous introduction by VAGRANCY FILMS operator James Bialkowski (where this author was singled out as “the biggest DOLEMITE fan in Canada”, and rewarded with a pornographic DVD for my patronage), we settled into an array of beautiful and bizarre trailers covering the width and breadth of exploitation and grindhouse cinema. Some of the films featured:  MARCO THE MAGNIFICENT (1965, featuring Orson Welles, Anthony Quinn and Omar Sharif), the memorably titled Fred Williamson western THE LEGEND OF NIGGER CHARLEY (1972, co-starring DOLEMITE director and actor D’Urville Martin), 80s sleaze classic ANGEL (1984), Sergio Corbucci’s spaghetti western COMPANEROS (1970, featuring Franco Nero), Lucio Fulci’s immortal – no pun intended – ZOMBIE (1979), the terrible looking Tony Curtis romp SEX ON THE RUN (1977, aka CASANOVA & CO.), and Sergio Corbucci’s DEATH ON THE RUN (featuring Michael Rennie, with subtitles desperately attempting to connect the film to Corbucci’s earlier success DJANGO), along with other various cinematic odds and ends.

And then came DOLEMITE. And the crowd ate it up. For you poor souls who have yet to check out the 1975 film (and you should remedy that immediately) DOLEMITE stars “king of the party records” Rudy Ray Moore as Dolemite, a karate-loving pimp/entertainer/club owner whose taste in clothing is matched only by his skill at bedding beautiful ladies. After being framed for the possession of drugs and stolen furs, Dolemite (thanks to the help of his Madam Queen Bee) is let loose to track down where and how the drugs are being fed into the community. He’s helped by his army of karate-trained prostitutes, his trusty heroin addict friend The Creeper (“Hey, hamburger pimp!”), and undercover cop Blakely, while simultaneously being hounded by corrupt cops, and taking on his nemesis Willie Green (D’Urville Martin) and – eventually – Mayor Daley. It’s all incredibly ludicrous, helped by Moore’s love of creative profanity (“That’s for fucking with me, you no-business, born-insecure, motherFUCKer”) and the inclusion of some of his trademark raps “Shine and the Great Titanic” and “The Signifying Monkey”. An incredibly entertaining, wholly original film that I would gladly watch on a weekly basis. And have.

After another brief introduction (over megaphone, natch), we settled in for Paul Morrissey’s truly bizarre BLOOD FOR DRACULA. Could this film have been made at any other time than the mid 1970s? Filmed back to back with the more gruesome FLESH FOR FRANKENSTEIN, the film shows Count Dracula (a wildly gesticulating Udo Kier) and his trusty man-servant Anton (Arno Juerging) travelling to Italy so track down untouched “Wirgins” to satiate the vampire’s blood-lust. They come upon a desperate once-wealthy family who attempt to sell off their four daughters to the supposed aristocrat, much to the chagrin of their estate handyman (Joe Dallesandro) who has been secretly bedding two of the sexpot daughters for years. Wildly comedic and satirical, the mix of strong European accents and shifting time period – along with some truly bizarre political commentary and a rapist hero – had a few in the crowd shaking their heads in disbelief. It’s also incredibly entertaining thanks to the over-the-top performances of Juerging and Kier and Morrissey’s wicked sense of humor.

And with that a dizzy and satisfied crowd of ne’er do wells headed out into the frosty winter evening, content that they had experienced something truly unique. Speaking as someone removed from the big city bluster, I can only sit and envy the truly lucky citizens of Toronto who have such a wealth of wonderful cinematic options to entertain them. If there was any justice in the world, we would all have a Toronto Underground Cinema variant in our respective cities, waiting to entertain, enthrall and (delightfully) sicken us with films both celebrated and forgotten.

Thanks again to the Toronto Underground Cinema, and Vagrancy Films