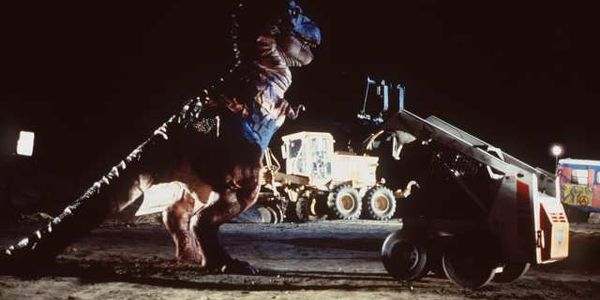 Cinéma Dévoilé [CINEMA OF THE DEVOID]

October 31st, 1976, JVC’s Victor HR-3300, the first VCR to use Vertical Helical Scan (VHS) hits the market place. The year before, however, Sony introduced the LV-1901 console — a Betamax tape player. JVC’s introduction of the VHS system was indistinguishable from an act of war, and with it, the Videotape Format War begun. Betamax’s tapes were of shorter length than VHS, but had a better video image (250 lines), better sound quality, and less crosstalk. However, because of the shorter length, they weren’t able to record full movies; to combat this problem, Sony introduced a longer tape, but the change in length reduced the quality to be equal to VHS’ two-hour tapes. With VHS being cheaper to produce and longer in length, if lower resolution than Betamax when used at speeds past two hours, it was the choice of the consumer market, and thusly followed video distributors. The early 1980s saw VHS gain momentum in the battle, and by 1985, they were crowned the winner.

VHS’s reign would go unchallenged for another twelve years before a new format rose up. Toshiba’s SD-3000, the first DVD player available for purchase, was released at the end of 1996 in Japan, early 1997 in America, 1998 in the UK, and 1999 in Australia. By 2000, the rise of DVD sales was incredible; key elements in DVD’s massive growth were attributed to better picture quality, smaller packaging, additional special features, and the ability to pick any scene to watch at a moment’s notice — meaning no more waiting for the the tape to rewind. Betamax and VHS’s battle was close, because the formats were nearly identical; with DVD, VHS didn’t stand a chance — it was clearly the future. The end of VHS was swift — by 2005, it was done… only the last death twitches remained to be seen through, and by 2007, the final major VHS release was let out like a last breath.

The era that Cinéma Dévoilé is going to focus on can be seen as the era of the VHS, but there were other changes that separate this era from those surrounding it. The end of the 1960s saw the demise of the studio system, which had overseen Hollywood’s film productions for the previous fifty years. In its place rose the New Hollywood; it’s a movement that saw the director as auteur, a title popularized by Andrew Sarris in his 1962 essay “Notes on the Auteur Theory,” and gave rise to legendary figures in film history like Woody Allen, Martin Scorsese, Francis Ford Coppola, George Lucas, Steven Spielberg, Ridley Scott, and many others. The New Hollywood movement was one of wildly creative individuals exploring the medium and telling tales that could never have been told in the studio system — one of the reasons being the change from stricter censorship to the more flexible ratings system we have in place today. The New Hollywood movement dissipated in the 1980s, with a return to studio-led features rather than auteur features.

In place of New Hollywood’s singular stories, the 1980s focused on blockbusters and establishing film franchises or following formulas. What this meant for the era covered by Cinéma Dévoilé is a growing polarity between “mainstream” genres and the horror genre, as budgets ballooned to extravagance for the one, and shrunk to diminutive size for the other. Within horror, franchise filmmaking took over in what Wheeler Winston Dixon states in his 2010 book A History of Horror was “a way that even Universal in the 1940s could never have imagined.” He further clarifies what any slasher film fan knows intrinsically, that “a high body count was the chief prerequisite, and character development and motivation were singularly unimportant.” However, what he fails to recognize in this statement is that the overuse of the generic clichés within this period of filmmaking acts like Chinese whispers in an echo chamber: the repetition is never quite one hundred percent, and the subtle changes over time grow wildly out of proportion. By the time you’re on the fifth HELLRAISER film, the ideas of the franchise have coalesced into a creation of their own merit. A large chunk of the multi-sequel franchises were produced by conglomerate owned studios, which allowed them to have larger budgets — CHILD’S PLAY 3 (1991): $13 million USD; HALLOWEEN 5: THE REVENGE OF MICHAEL MYERS (1989): $6 million USD; JASON X (2001): $14 million USD — than the releases of smaller studios — NIGHT OF THE DEMONS 2 (1994): $1.3 million USD; CARNOSAUR (1993): $2 million USD; THE DENTIST 2 (1998): $1.8 million USD. This meant that the larger series had more money, but struggled for new and interesting ideas, while the smaller movies had a deluge of ideas, but struggled with budget. While it is true that the 1990s saw some interesting horror — CRONOS (1993), for example —  it is often considered a slow period in the horror genre, much like the 1940s, and these factors are chief among the reasoning for the stagnation.

The end of the 1990s marked an upswing for horror, though. The release of SCREAM in 1996 and THE BLAIR WITCH PROJECT in 1999, as well as FINAL DESTINATION in 2000, seemed to mark a return to form. The genre was fun again, for a short time. After the events of September 11th, 2001, the horror genre, and film as a whole, took a darker approach to the stories that it told. Series like SAW (2004-) and HOSTEL (2005-2011), known as “torture porn,” became a staying force within the genre. Films outside the genre also began to reflect the change in filmgoers’ psychology; BATMAN BEGINS (2005) gave us a brooding Dark Knight, where before we had Bat-nipples and Arnold Schwarzenegger. The events of 9/11 were reflected in the films being produced, and a new era of film began.

Cinéma Dévoilé does not seek to define its era of film history as any better or worse than those before or after; it seeks to give a fair reevaluation to the often panned, ignored, or just plain forgotten films that fall within its boundaries. I will be evaluating the efforts of the filmmakers to present stories within the limitations set by franchise or budget, based on the films individual enjoyment; as well as its camp value — “Camp” as described by Susan Sontag: “The essence of Camp is its love of the unnatural: of artifice and exaggeration. And Camp is esoteric — something of a private code, a badge of identity even, among small urban cliques.” Most of the films selected for evaluation will be from the 1990s or the years surrounding, with 1985 and 2005 being the cutoff for each side. Along the way, there will also be looks at specific features of the era separate from any specific film. It is my goal to understand this era and the changes fully, through Cinéma Dévoilé. I hope you’ll join me for the ride.