Great news for you Daily Grindhousians who enjoy watching other people suffer (i.e. all of you): Turner Classic Movies ) has a month-long festival of slapstick comedy coming in September!

Hosted by stand-up comic Greg Proops (the redhead with the glasses from old episodes of WHO’S LINE IS IT ANYWAY?), Ouch! A Salute to Slapstick begins on September 6th, and will air every Tuesday and Wednesday throughout the month. TCM has lined up what looks to be a jim-dandy program of 57 feature films, shorts, and documentaries tracing the history of slapstick on film from 1914’s TILLIE’S PUNCTURED ROMANCE through 2004’s ANCHORMAN: THE LEGEND OF RON BURGUNDY. 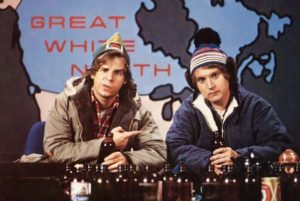 In addition to the work of masters like Chaplin, Keaton, Lloyd, Brooks, and Zucker/Abrahams/Zucker, the festival will include classics like the Marx Bros’ A NIGHT AT THE OPERA, ABBOTT AND COSTELLO MEET FRANKENSTEIN, and the greatest Shakespeare adaptation to ever migrate down from Canada, THE ADVENTURES OF BOB & DOUG MCKENZIE: STRANGE BREW. (This writer highly recommends setting your DVRs for Preston Sturges’s THE PALM BEACH STORY, airing at 4:30 AM (EDT) on September 14th. Or just stay up. I’m not here to tell anyone what to do.) 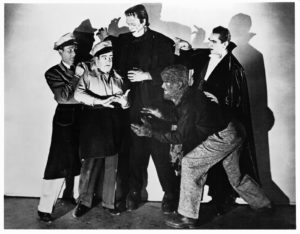 Ouch! A Tribute To Slapstick runs all of September on Turner Classic Movies