Fred Dekker—who hosted a screening of NIGHT OF THE CREEPS earlier in the weekend—returned to the BRUCE CAMPBELL HORROR FILM FESTIVAL Saturday night to receive the inaugural GROOVY AS HELL award and introduce his 1987 fan favorite, THE MONSTER SQUAD. 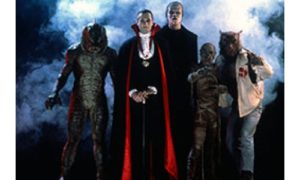 This writer hadn’t seen the film since constant viewings on cable throughout the late ‘80s and was eager to catch up with “the squad.” The film, a briskly paced love-letter to Universal Monsters is still plenty of fun, even if at 36 I found myself picking apart the plotting. (Dekker mentioned that the original script was much longer and probably filled in some of those gaps). That said, I completely understand that I’m picking apart a film that was aimed at 11-year-old boys, and the 11 year old in me was pleased taking a trip back to being a horror obsessed adolescent. The monster designs are still some of the best—particularly the Gil Man—and it’s great seeing a vampire that looks like the Dracula I grew up with, there are more than a few scary moments for the younger kids,  and all of the Shane Black, cool cop dialogue is a treat to listen to. It’s nostalgia, but it’s delicious, refreshing nostalgia. 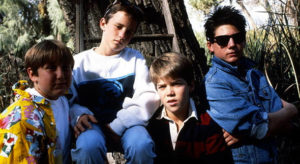 Dekker was joined by Andre Gower and Ryan Lambert as the three reminisced about the film’s release as well as making the film, working with such great character actors, and why Dekker doesn’t feel the need to write angry letters to Fangoria anymore.