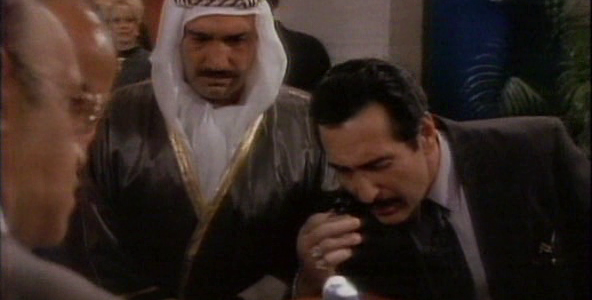 DIAMOND FLEECE is an enigma in the world of Made-for-USA-Network movies, if only due to its lack of a body count. During the entire course of its 93-minute running time, not a single character dies – nobody falls from a roof, no vaguely sympathetic character is found with their eyes opened on a chair, and no innocent bystander who saw too much is strangled to death. There’s not even a little old man who dies to leave a will full of question marks. It’s completely bizarre, seeing the same characters that started the movie survive until the closing credits. I’m not sure that I like this feeling. 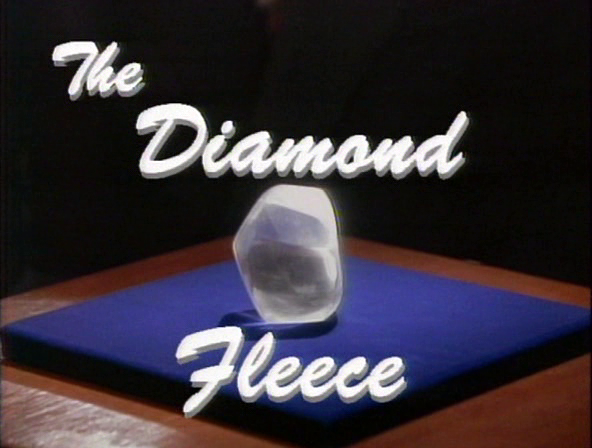 But DIAMOND FLEECE isn’t a dark film, so the lack of death isn’t that conspicuous. It’s an affable, if unremarkable, little heist romance that was originally made for Canadian television and netted star Kate Nelligan a Gemini Award for Best Actress in a Dramatic Program or Mini-Series. It’s probably one of the network’s most light-hearted entries, a fact that probably irritated those who picked up the DVD under the moniker THE GREAT DIAMOND ROBBERY with more thrilling cover art – especially as the film has no relation to the 1954 Red Skelton movie of the same name.

Ben Cross, shortly after the unfortunately abbreviated “Dark Shadows” revival, stars as Rick Dunne, a jewel thief (with a fine American accent) who is let out of prison by insurance company agent (Tom Butler*) in order to examine the security system of a jewelry store that has recently purchased a giant 915.75 karat bauble called the Carter Diamond for $32 million pounds in order to… get people into the store or something. It all sounds like the most expensive window display ever conceived. Couldn’t you just dress up a mannequin like Marilyn Monroe and call it a day? 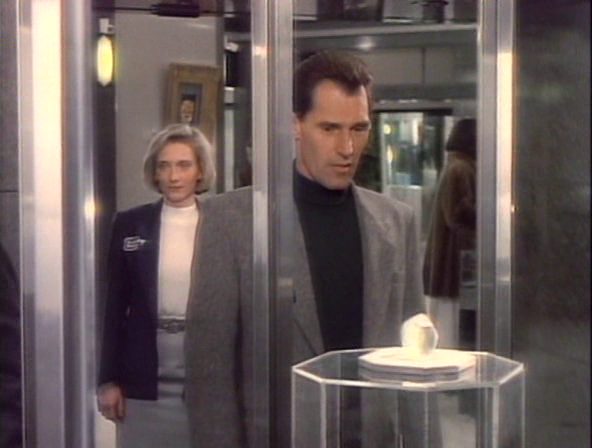 Anyway, Rick is more than happy to have the job, even if it means tangling with security specialist Ms. Green (Janet-Laine Green), because he’s got larger plans. (Because he IS A JEWEL THIEF THAT A JEWELER HAS HIRED FOR SECURITY THAT BASICALLY SPENDS MUCH OF THE FILM TALKING ABOUT HOW HE COULD STEAL THE DIAMOND. It’s like SNEAKERS, only it makes less sense.) He gets in touch with his old partner, Cliff, played by SCTV and Saturday Night Live vet Tony Rosato, and the two hatch a scheme in order to make off with the shiny.

Their plan involves Rick posing as a famous diamond cutter named Alex Breuer under loads of make-up — enough that, while he doesn’t look like Cross, he seems more Hobbit than man. (THE LIST OF ADRIAN MESSENGER this ain’t.) Everyone buys it, though I was never quite sure if the audience was supposed to understand that Rick and Alex were the same person during the course of the film, because the make-up effects could go either way. It makes sense that the other characters believe that Alex is an individual person, but the audience is pretty aware of what’s going on in the plot, so it’s not really an effective slight of hand if the intention was to keep the deception from viewers until the intended climax.** 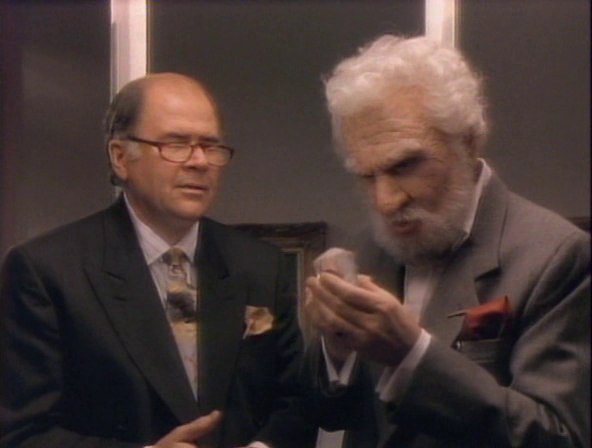 The biggest obstacle in Rick’s way (figuratively and literally) is Inspector Outlaw (seriously), a cop played by the always-welcome Brian Dennehy. Outlaw, introduced to the film while wiping potato chip crumbs off of his jacket, is essentially Dennehy still playing the Leo McCarthy, the cop from F/X he’d just played in that film’s sequel the previous year, but who the hell cares? It’s Brian Dennehy being a likeably obnoxious authority figure, and that’s pretty much all you need. There’s nothing special about it, but Outlaw is given enough minor personality quirks and snide dialogue to make him a genuine person that’s fun to see on screen – the sort of character-building shorthand that the writers of the latest GODZILLA film could have used. They could have also used Brian Dennehy.

All films could use Brian Dennehy. And in the early ‘90s, pretty much all films did use Brian Dennehy, as this was one of ten (!) made-for-television films in which he appeared over the course of two years. Where have you gone, Brian Dennehy? Our TV turns its lonely eyes to you. Woo-woo-woo. 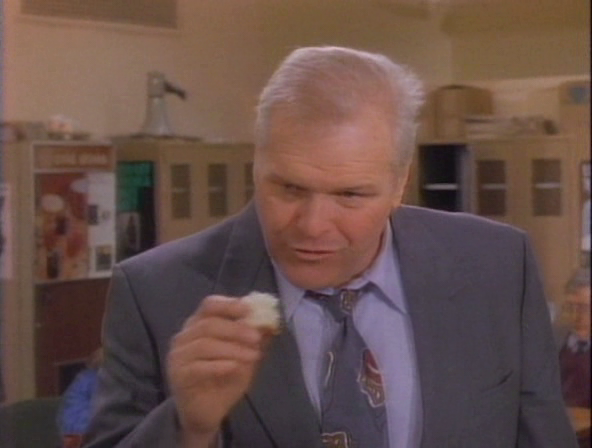 At this point, you might be asking yourself, “but what about Genie Award Winner Kate Nelligan?” Well, Kate Nelligan is basically in a different film. While all of this interesting jewel heist stuff is happening, Rick is also romancing Holly, the owner of a used book store across the street, played by — here you go — Kate Nelligan. She rebuffs him at first, but then Rick-as-Alex visits her, and she starts being friends with Alex, and Alex slowly uses info about her to make Rick seem more attractive.

Now, none of this has anything to do with the diamond heist. There’s no reason for Holly to be in the film at all, and there’s even less reason for Rick to pose as Alex in order to woo her and extend the charade long well past the point where it could be a zany ‘80s comedy about identity swapping. It’s just there to be an inevitable romance, comes off as pretty bland and hinges on Holly being both completely oblivious and, in the end, accepting of Rick’s deception. She’s given some minor character moments, like a letter from J.D. Salinger and talking about being irritated by shoplifters “not because of the money, but because they’re steeeeealing,” just to set up her being more disgusted by Rick when she finds out, but it doesn’t really amount to much but a distraction from the heist stuff. Is this what makes of a Genie Award? I have no idea. 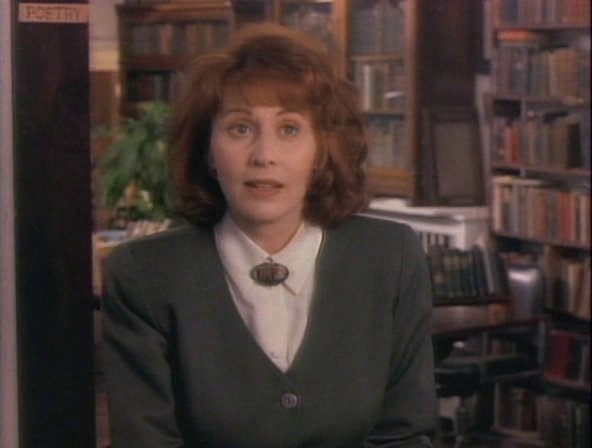 Thankfully, the heist stuff is pretty entertaining. Director Al Waxman and writer Michael Norell (both TV acting vets, from “Cagney and Lacey” and “Emergency,” respectively) throw in a number of fun moments, including a quirky score, a bit about cadmium fabric and a rap sequence from someone claiming to be Hammer’s cousin as a distraction (!) so that even if it doesn’t, well, cohere into a sensible plan, there’s still fun to be had.

* – Tom Butler is one of those guys whose face you know, but whose name you probably don’t. He’s the Ronny Cox-type who played the FBI agent who investigated Parker Posey’s Fiona in JOSIE AND THE PUSSYCATS, though, so I’ll always remember him.

** – Fun side note: In this review of the film, the performance of Breuer is credited to “George Spelvin,” a common pseudonym used for theater and the basis for THE DEVIL IN MISS JONES’s Georgina Spelvin. I’m not sure if this credit was something on the press release or something the nameless AP writer came up with, but it seems to imply that we’re not supposed to know that Breuer isn’t supposed to be Rick. So.. spoilers, I guess? Sorry. 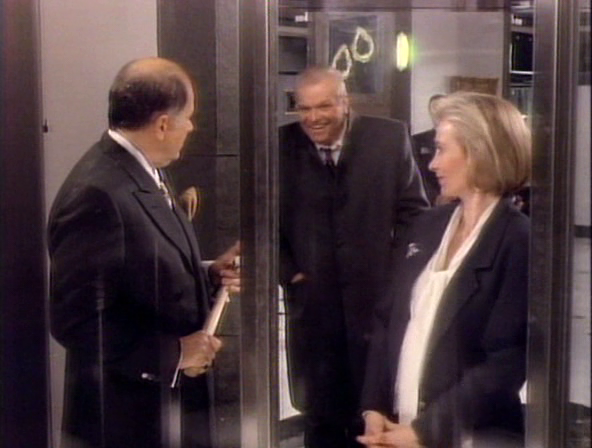