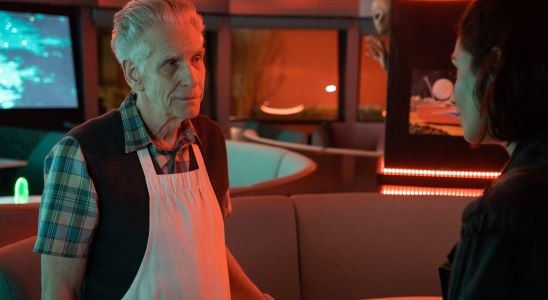 There is a quirky edge to DISAPPEARANCE AT CLIFTON HILL that at times is endearing and other times veers too close to feeling like a Twin Peaks or FARGO knockoff. But it is the film’s willingness to embrace the odd through its very unreliable narrator of a protagonist, one particular goofy (but inspired) casting choice, and a vision of Niagara Falls as a sad shadow of a resort town that makes it a memorable flick–even if its mystery element largely feels under-developed. 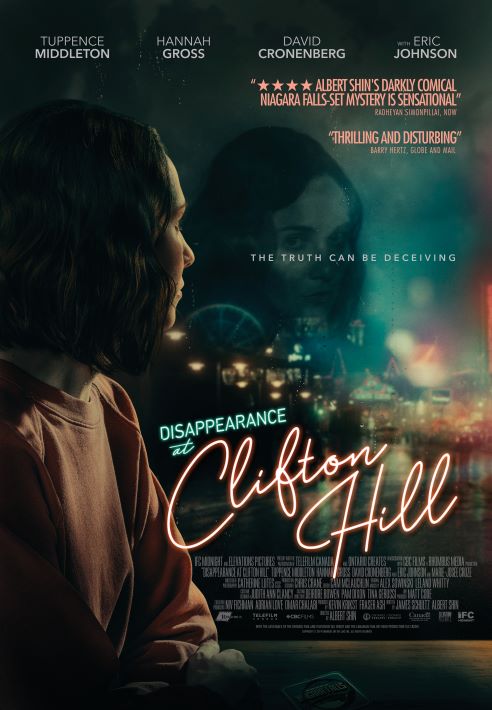 In a prologue set in 1994, seven-year-old Abby spends an afternoon near a lake with her younger sister and parents. When she briefly wanders away from her family into the woods, she runs into a boy of about thirteen with a bloody bandage over his left eye. He is dirty and frightened, urging her to keep quiet when a car slowly drives by. As soon as the car is gone, the boy makes a run for it, only for the occupants of the car to chase him down, hit him with a tire iron and throw him in the trunk. Traumatized, Abby does not tell her parents what she witnessed, even when she later sees the car ominously pass by.

In the present day, adult Abby (Tuppence Middleton) returns to her home on the Canadian side of Niagara Falls. Her mother has recently died of a heart attack and, with her father dead even longer, the only family she has left is her sister Laure (Hannah Gross). Yet Laure is frustrated with Abby from the moment she hits town. The frustration stems partly from Abby immediately turning down a deal her late mother worked out to sell her rundown motel to a local prominent business family, but mostly from the fact that Abby constantly spins untruths about her life. 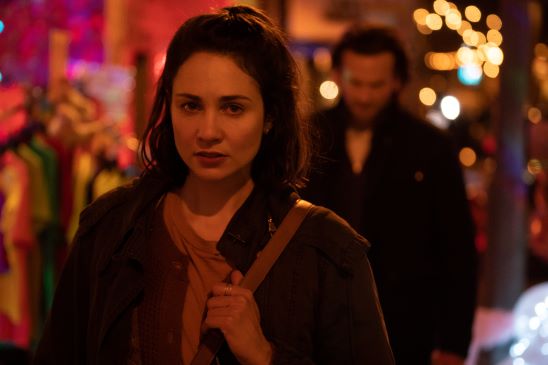 Co-writer/director Albert Shin thankfully does not play coy about the fact that Abby is a compulsive liar. After hitting town, she picks up a guy at a bar by claiming to be an engineering student–a story she overheard on the bus as she traveled. From there, Shin gives numerous examples of Abby’s ability to convincingly lie at the drop of a hat as she dives headfirst back into the mystery of the kidnapped boy, even though no one (understandably) believes her.

The “is she or is she not telling the truth” about the kidnapping is the weakest aspect of DISAPPEARANCE AT CLIFTON HILL. But it allows the audience to accept the colorful, neon-noir (no, that’s not a typo) style that Shin is going for. Because if Abby is lying about the boy’s kidnapping, the overtly sinister attitudes of the rogue’s gallery of suspects she comes across simply becomes the heightened way she sees the world. But if she is telling the truth, the use of a spoiled land developer who looks and acts like he stepped off the set of a soap opera, a bargain-bin Siegfried and Roy pair of magicians, and an apparently psychotic gambler who keeps her feeble husband chained to his wheelchair in a closet all fit into the particularly funky milieu of a tacky “family” resort town in the off-season. 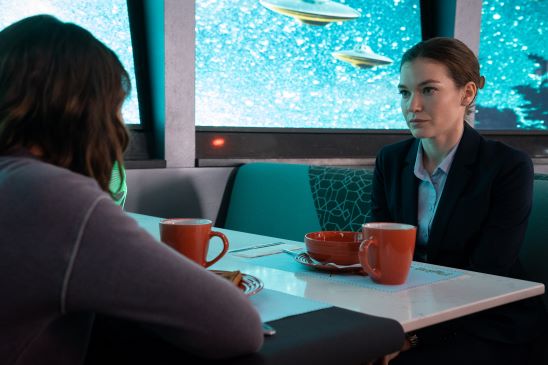 That loopy, collision of gray winter skies and garish bursts of unexpected color extends to the casting with David Cronenberg, of all people, playing Walter–a rescue diver and self-declared chronicler of hidden Niagara Falls history. As the only person who readily believes Abby from the beginning, this director of some of the chilliest cinematic dissections of human behavior exudes warmth and charm. But like every character in the film, Walter is off-kilter, recording a slightly paranoid podcast (you haven’t lived until you’ve heard David Cronenberg urge listeners to “rate and review” in his softly insistent tone) in the basement of a flying saucer-themed diner. No matter how kind he may be, does the endorsement of a clearly paranoid/bordering on delusional old kook make Abby’s story any more believable?

The pulpy mystery may not hit the sort of twisty thriller beats that the truly unnerving prologue sets up, but Shin, co-writer James Schultz, and Middleton (thankfully avoiding turning Abby into a brooding bore) find a more interesting personal mystery with Abby. Asking the audience to identify with a compulsive liar who reveals herself to be lying to the audience as much as she lies to the other characters is tricky. That DISAPPEARANCE AT CLIFTON HILL manages to invest the viewer not necessarily in when she is or isn’t being truthful, but instead in why Abby is this way and if she will ever find a way out of the web of lies she spins is impressive. Thankfully, it manages to engage the viewer in a personal mystery as character study that is unexpectedly charming and avoids unnecessary melodrama. 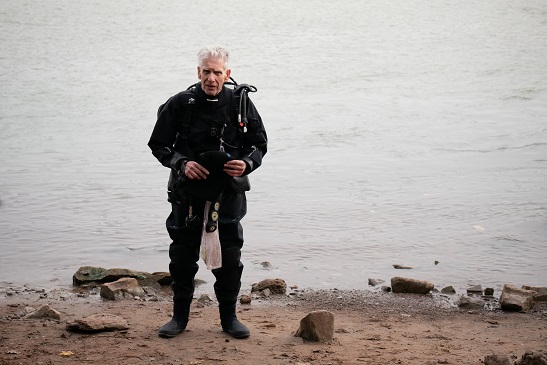 DISAPPEARANCE AT CLIFTON HILL hits theaters and VOD from IFC Midnight this Friday.