It’s been a bit since we’ve heard anything about DJANGO LIVES, a new film in which Franco Nero was set to reprise his famous role in what would be an official third chapter in the DJANGO saga.  The good news is that the project from Mike Malloy and Eric Zaldivar (EUROCRIME! THE ITALIAN COP AND GANGSTER FILMS THAT RULED THE ’70S, THE SCARLET WORM) is still very much ago, and has just secured the rights and gained a director!

Point Blank Pictures has secured the sequel rights to DJANGO – the original Spaghetti Western that made Franco Nero an international star. Nero will reprise the role of Django in this new film, DJANGO LIVES.

The story, from an original screenplay by Eric Zaldivar and Mike Malloy, finds the older Django as a consultant to silent-movie Westerns in 1915 Hollywood. After getting entangled with racketeers, Django fights back, and all hell breaks loose.

The film will be produced by industry veteran Carolyn Pfeiffer and David Hollander.  SXSW co-founder Louis Black will executive produce.  Black also executive produced such documentaries as THE KING OF TEXAS and BE HERE TO LOVE ME: A FILM ABOUT TOWNES VAN ZANDT.

Joe D’Augustine is set to direct. D’Augustine was co-editor on four features for Quentin Tarantino including INGLORIUS BASTERDS and KILL BILL.  In 2007, he oversaw the reconstruction of Spaghetti Western classic THE GOOD, THE BAD AND THE UGLY. He also edited RZA’s THE MAN WITH THE IRON FISTS and directed a previous feature, ONE NIGHT WITH YOU.

“Joe is the perfect choice for director, being steeped in both mainstream Hollywood action cinema and Italian genre film,” said Zaldivar, co-writer/co-producer.

“It feels great to have not only Franco’s enthusiasm for this script and our project, but also to have the blessings of the original DJANGO creators and their heirs,” said producer Carolyn Pfeiffer.

“Over the decades there have been scores of quasi-related Django spin-offs, but Franco Nero has only reprised the iconic gunslinger a single time,” said co-writer/co-producer Mike Malloy. “So it was an occasion worth creating a special story for. And with DJANGO LIVES’ subplot that concerns a newfound, unexpected nationwide celebrity for Django, the screenplay really examines fame, violence in fiction and authenticity in storytelling – and not just the standard themes of aging and fatalism that you usually have with an older tough-guy film.”

“We’re glad that so many mainstream talents have joined the project at such an early stage, out of enthusiasm for the Django legacy,” said director Joe D’Augustine. “The original DJANGO was a worldwide mainstream success, as was Tarantino’s . We wanted to make it clear we were keeping that going — not making a cult item, but rather a relevant film whose story has elements of prestige and crossover appeal.”

We’ll certainly be keeping a close eye on this project, but you can follow along as well by checking out their Facebook page here!  Also, be sure to check out No-Budget Nightmares’ coverage of THE SCARLET WORM here! 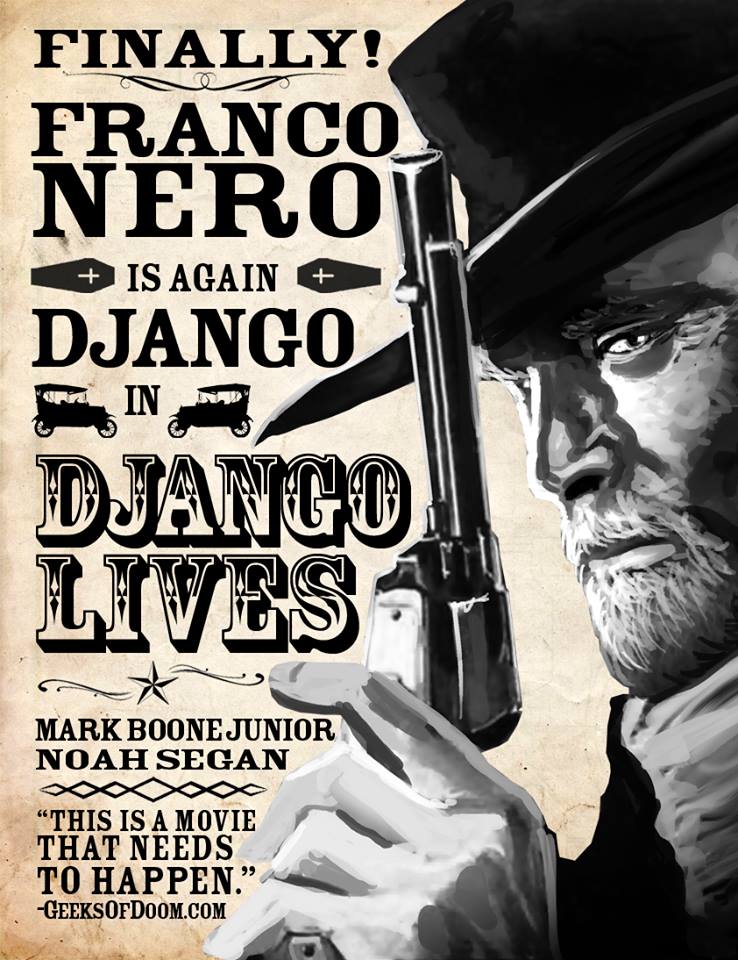