These days, when I want to watch a horror film, my options are vast. I can order the Blu-Ray, grab a regular DVD version, or purchase a digital copy. I can stream from several different devices, from the behemoth gaming console to my slim little smartphone. If I were a more rebellious consumer, I could turn to torrenting sites for my cinematic needs. With so many choices, it’s becoming more and more difficult for studios to clampdown on leaks and unauthorized versions of their movies. Today more than ever, home entertainment is at its most convenient.

It wasn’t always this way. Getting into the right mindset for the Video Nasties films requires a turn of the clock back a few decades to the 1980’s, a time before the Internet and before humongous cable packages with endless channels. A time when uncensored, unclassified VHS tapes littered the shelves of video rental stores in the United Kingdom.

The advent of VCRs in the early 1980’s made it possible for consumers to watch and re-watch their favorite shows at their leisure. After a small group of distributors got the big idea to take advantage of the video boom, the first pre-recorded VHS tapes appeared, and soon after, the first video rental “libraries”. For the genre fan in the UK, it was a sort of Golden Age, an age of easily acquired, unrated horror that could be viewed in the privacy of one’s home.

The Cinematograph laws that classified films and set forth government regulations for their public distribution had previously applied only to the cinematic realm. Videos were a new technology, and thus outside the purview of the Cinematograph laws. This newfound creative freedom, plus public demand for a wider selection of VHS titles, prompted distributors to churn out a plethora of sensational low-budget films. It’s safe to say that these films would have never passed muster had the censors gotten a whiff of them in the first place. These films were often foreign and fell into the horror or exploitation categories. Their gratuitous gore,  brutal ultraviolence, and unashamed sexuality raised the eyebrows and the ire of Britain’s religious right. One of the watchdog groups, The National Viewers and Listeners Association, came up with the term “video nasties,” which quickly became the go-to colloquial term. 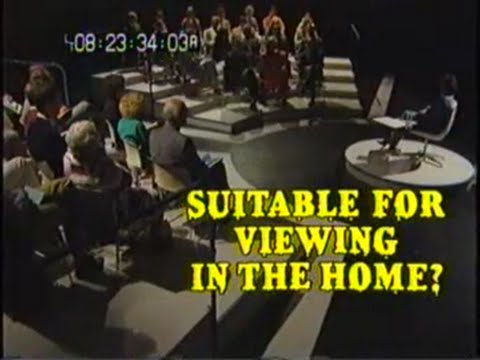 Soon enough a decency crusade, fronted by self-appointed moral authority Mary Whitehouse, aligned itself with the religious right party and catalyzed a clampdown on the so-called Video Nasties. Naturally, the media outrage only increased demand for these “depraved” films, and adolescents and teens were still getting their hands on them. Though they had no hard evidence, the political pundits and crusaders did what their predecessors had done with comic books and rock music, and what their successors did with Tarantino films and Marilyn Manson songs: they began to link crime and youth corruption with exposure to Video Nasties, and called for action. Conservative media stirred the pot with zeal, churning out their publications with headlines aimed right at their readership’s deepest fears: “BAN VIDEO SADISM NOW” “RAPE OF OUR CHILDREN’S MINDS” “JUDGE BLAMES VIDEO NASTIES FOR MURDER” ”WE MUST PROTECT OUR CHILDREN NOW”. 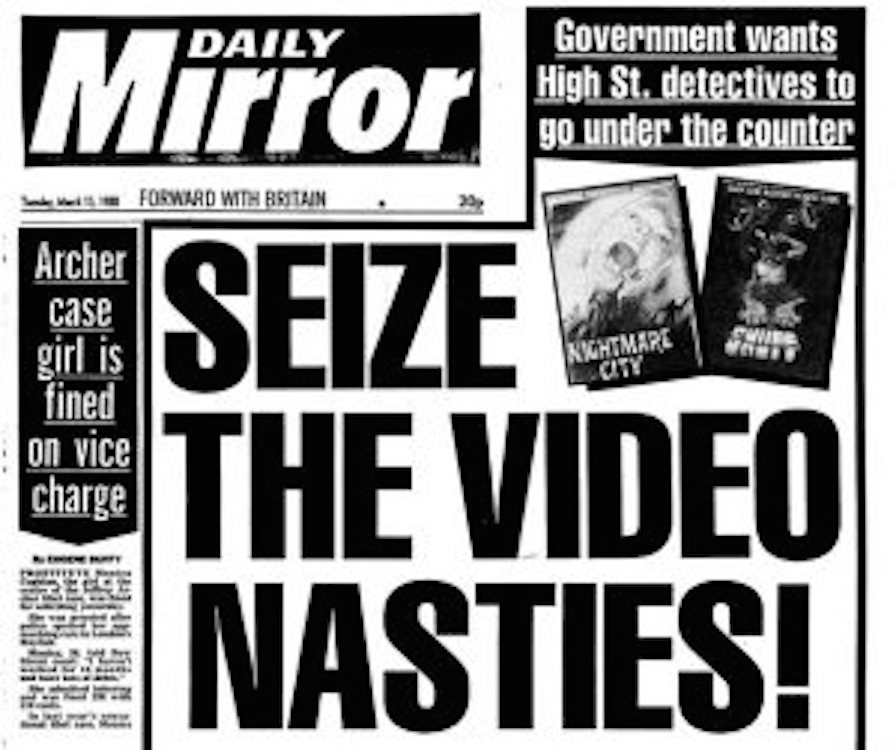 Conservative MP Graham Bright introduced a bill to the House of Commons addressing the matter, which naturally had no problem gaining support. The Video Recordings Act of 1984 passed with ease, and took effect in September of the following year. Under the authority of the VRA, the Department of Public Prosecutions now had the power to restrict both films in theaters and on home video. All film releases after the VRA took effect had to comply with the Act and be submitted for classification by the BBFC. If a movie came out before then, it had three years to submit to the new authority for re-classification, or risk prosecution. Distribution of unclassified videos was now a criminal offense. Renting or selling Video Nasties to minors was also a criminal offense. The new laws served the classic politicians’ ethos: “If we can’t ban it outright, we’ll make it financially impossible to continue.”

The DPP’s list of Video Nasties was a fickle, contentious list. Films were chosen on the basis that they were likely to be deemed “obscene” by the courts. While the legislature made efforts to actually view the films that Whitehouse and Co. objected to, there was simply too much content to review and many titles were added to the list for the most superficial reasons: graphic imagery on the box art, “suggestions” by the media, or simply a scandalous film title. As a result, films were added to the list only to be dropped months later, adding to the confusion as to which films were true Video Nasties. The final total came to 72 prosecutable films, though 39 were actually brought before the courts.

The DPA resulted in the financial crippling of any film distributor that dared to release any film that might offend the sensibilities of the religious right. Video store raids were common, indie distribution companies were decimated in the moral panic that followed, and the Video Nasty became a coveted collector’s item. For a remarkable in-depth look at the Video Nasties craze, be sure to check out the Video Nasties documentary trilogy (that also provided the source material for this article), now available on Shudder and VOD. 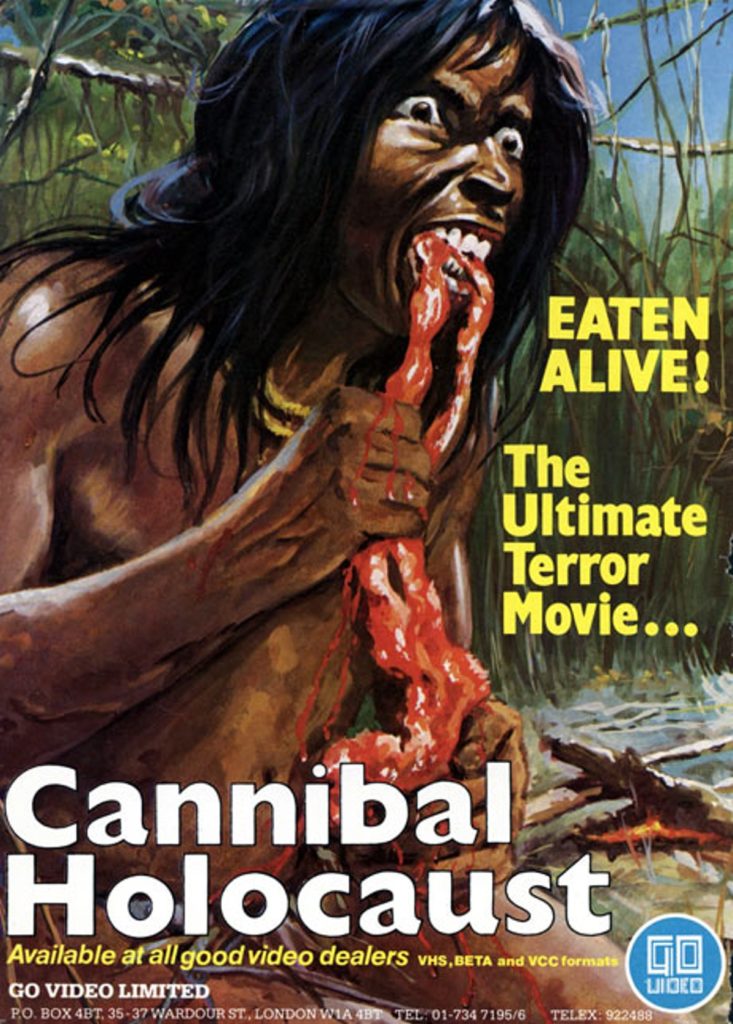 “The experiences of Camp are based on the great discovery that the sensibility of high culture has no monopoly upon refinement. Camp asserts that good taste is not simply good taste; that there exists, indeed, a good taste of bad taste. The discovery of the good taste of bad taste can be very liberating. The man who insists on high and serious pleasures is depriving himself of pleasure; he continually restricts what he can enjoy; in the constant exercise of his good taste he will eventually price himself out of the market, so to speak. Here Camp taste supervenes upon good taste as a daring and witty hedonism. It makes the man of good taste cheerful, where before he ran the risk of being chronically frustrated. It is good for the digestion.”

It’s in this spirit that I chronicle my journey through the infamous list of restricted films in Britain. The Video Nasties were by no means high cinema. No person in their right mind would watch CANNIBAL HOLOCAUST expecting CITIZEN KANE. Video Nasties were, by definition, violent and depraved enough to elicit gasps and outrage from the UK’s religious right. They pushed boundaries of sensibility through violence, gore, sexuality, drug use, and general subversiveness. When engaging with each of the 72 films on the list, I’ll not evaluate them on technical quality or artistic value. Rather, I’ll focus on three elements:

BOLDNESS — an ethos best summed up by NIGHTMARE filmmaker Romano Scavolini: “Look, I don’t want the usual hypocrisy of American genre films where at a certain point you see the knife and not the wound. If we have to go down that road, let’s go all the way without hypocrisy.” The creators of these works earned the wrath of Mary Whitehouse and the NVALA precisely because they treated the camera as a witness, refusing to cut away at the most disturbing moments. They focused on the ugly face of society and lingered on its warts. It’s only fair that the notorious 72 films be appraised for that same fearlessness. While the logistics of a visual effect may have called for a sly edit here and there, there’s no excuse for an exploitation film to follow the rules of more respectable, polished studio fare and cut away before the knife penetrates the body. Leaving heinous acts up to the viewer’s imagination does not jive with grindhouse aesthetic, and this column doesn’t take kindly to it.

SENSATIONALISM — The marketing for these lurid films could be summed up in the old adage: “Sell the sizzle, not the steak.” Promotions for many of the Video Nasties included the handing out of vomit bags, and claims of theater patrons passing out in the aisles. The most famous example is THE LAST HOUSE ON THE LEFT’s tagline: “To avoid fainting, keep repeating: It’s only a movie. It’s only a movie…” Does the film live up to its own hype? Was it truly notorious in its time?

SHELF LIFE — Some Video Nasties are entertaining, while some are completely disturbing. In any case, I find that the best films stick with me long after the credits roll. How memorable is the film? Do I find myself cringing at its most graphic scene days later? Is there a good chance that there would be outrage if this were a new film being released today?

Finally, each review will tally up the gruesome goodies that we tell our friends about when bragging about the latest grindhouse flick we’ve watched. I’m a child of the 90’s and grew up with MonsterVision, so in the spirit of Joe Bob Briggs’ “Drive-In Totals”, I’ll be keeping track of “Notable Nasties”, giving quick mention of gory details and scandalous scenes that likely drove the decision to add the film to the list in the first place.

In the same vein that people eagerly read banned books simply because they once fell outside the narrow, extreme ideologies of the religious right, so do viewers consume Video Nasties. In the course of watching these 72 films, some insight may be gained into the nature of moral panic and why our societies fear what they do. Or not—sometimes a cigar is just a cigar, and there’s nothing to be gleaned from it beyond the images onscreen. In any case, it ought to be a nasty ride.
The Video Nasties list is as follows: 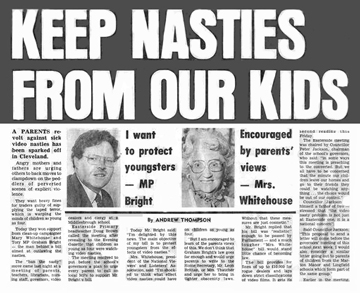