Many detractors of the horror genre argue that these films offer a misogynistic agenda and provide entertainment to those who enjoy seeing women in peril. It doesn’t help that a lot of older cover art in the genre often have scantily clad women on display. Then, there’s the Final Girl. Every one knows who she is: often the most virginal in the cast, doesn’t show much nudity if any, and survives the movie after being put through hell. She sometimes serves almost as an unspoken love interest for the monster or killer, maybe in reference to classic stories like PHANTOM OF THE OPERA or BRIDE OF FRANKENSTEIN. One example in film history that finds itself the focus of contrasting feminist arguments is I SPIT ON YOUR GRAVE. 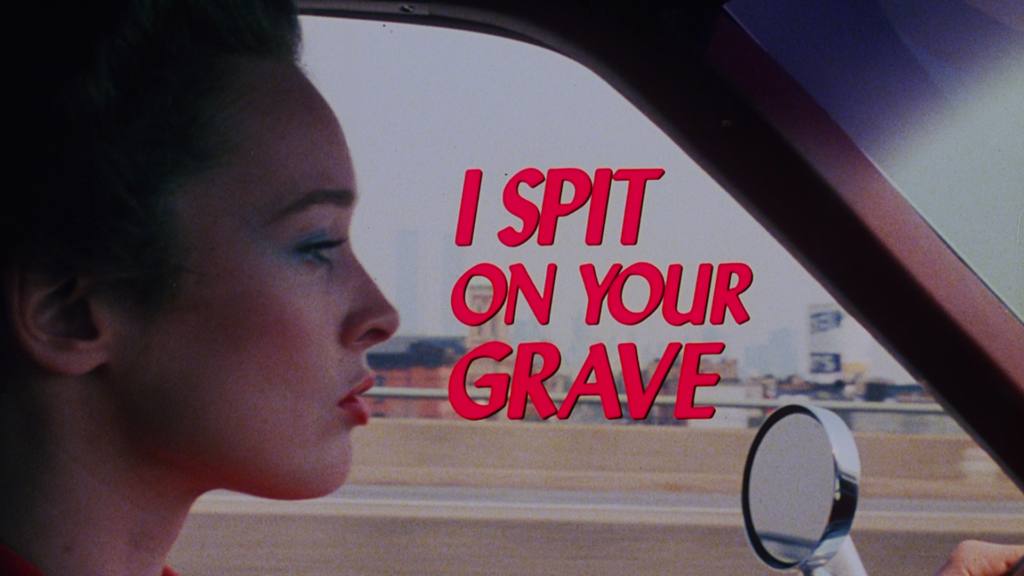 Back in 1978, it had a poorly received release under its original title DAY OF THE WOMAN. If you’ve ever seen the movie, then it’s not hard to see why it’s considered one of the most controversial movies ever made. Camille Keaton plays Jennifer Hills, an aspiring novelist whose resume has so far only consisted of short stories. She decides to rent an isolated cottage in the woods to focus on her book, but her stay is interrupted by four men who seem to feel she owes them something. One of them is the mentally disabled Matthew who appears to be the only one with even a drop of empathy. These guys have the idea that women are wanting one thing only and they are going to give it to her. This leads to some brutal rape scenes that takes up a bulk of the film and really scares me to think what Keaton had to go through while filming it.

Luckily, I SPIT ON YOUR GRAVE allows Jennifer to get some redemption as she is left presumed dead in the cottage. She bathes her wounds and literally puts the pieces of her story back together as she plans her next step. We watch as she stops by a church, gets down on her knees and asks God for forgiveness for what she’s about to do. That plan ends up involving luring the men who hurt her back to the cottage to kill them off. Matthew, who was unable to climax when he forced himself on her, finally gets his chance to finish, but she puts that to an end by fitting a noose around his neck during intercourse and hangs him from a tree. What’s really disturbing is prior to this, Matt is planning to stab her due to her being the root of him not having any friends and that him raping her has only caused him more problems. In Matt’s eyes, HE is the victim and she should be to blame for this. His death is only the beginning. 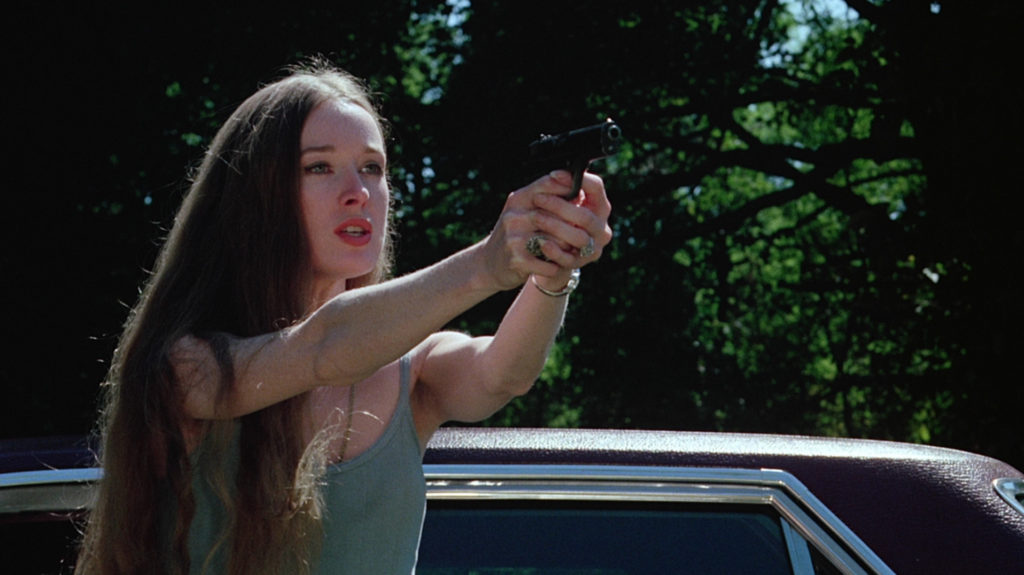 Jennifer discovers that one of the men, Johnny, has not only a wife that adores him, but a little son and daughter. He embraces them without any resemblance of the monster she had to experience out in the woods and this adds fuel to her rage as she convinces him to come back with her with the promise of sex by a few looks. This assumption, he states, is why he did to her what he did. Her supposedly revealing clothes and long legs were what drove them crazy and a man must do what he needs to do. These are his reasons, not mine. Personally, I think he gets it the worst (or best?) when she not only strokes his member in the bath tub, leading him into a relaxed state, but castrates him at the same time. We get some amazing shots of him grabbing his crotch area as blood spurts and she locks him alone in the bathroom to die a slow painful death. She has castrated him of his most coveted weapon and must suffer without it. I think it’s genius. She kills off the other two out on the lake, the last one hearing Jennifer speak, “Suck it, bitch” before disemboweling him.

What’s interesting watching this now isn’t just the graphic violence throughout, but the amount of full frontal nudity on display from both genders. It adds more of a raw edge to the film as there isn’t an ounce of self-awareness or vanity involved. The rape scenes are both discomforting and without restraint as these men have a complete disregard to any of Jennifer’s pleas and she appears to be nothing but an object to them to play with. 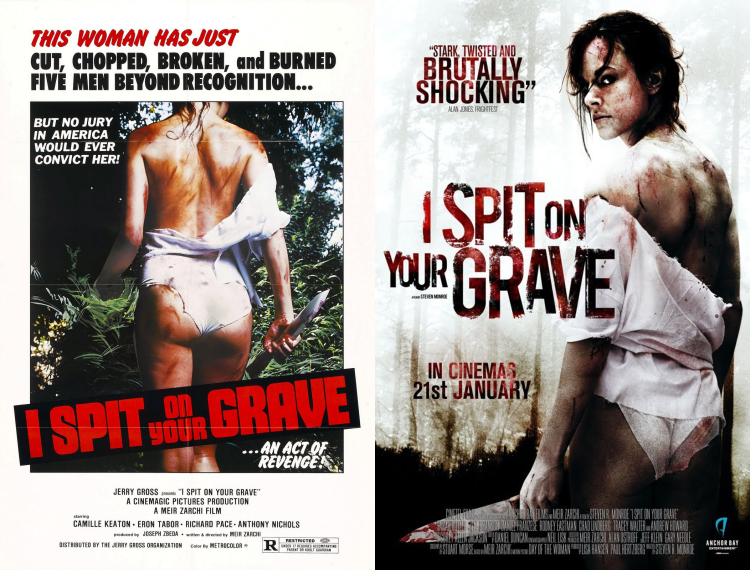 Some of these observations are what differentiates the original I SPIT OF YOUR GRAVE from its 2010 remake. While the general story remains, Jennifer feels more like a vengeful spirit as her body is not recovered after the assault and she throws herself into the lake. This version definitely spends more time coming up with gruesome revenge schemes, including sewing one’s eyelids open where crows come to peck his eyeballs out. Another gets sodomized by a shotgun that eventually blows his insides out. The final death involves a castration, but he is also forced to eat his own severed cock. Even with all this, this version does feel a bit tamer compared to the original.

Yes, Jennifer still gets raped and beaten, but this version does not force the audience to endure the sort of extended sequences  for which the original was notorious. The film fades to black and comes back to a shot that insinuates that others have had their way with her. The photography looks clean, scenes professionally edited, and actors with notable credits were used, taking away any bit of authenticity the original offered. Now, it can probably be argued that authenticity is what the filmmakers wanted to get away from as the material isn’t exactly the most inviting. However, this time around, her revenge feels more like a gimmick encouraging viewers to tell their friends of the film with the crazy death scenes, never mind she’s just been raped several times. The announcement that the remake was happening had plenty of resistance in the horror community online as to why this project was being utilized. Still, the interest was clearly there as this obviously made enough profit to garner two sequels as of this writing.

While the original battled censorship and was difficult for those interested to find a theater showing it, the remake was readily available at your local Redbox. One literally could go grocery shopping and leave the store with a copy of I SPIT ON YOUR GRAVE for a dollar. This remake was released within those years where movies like HOSTEL and the SAW franchise were raking in millions of dollars at the box office. The yearn for the extreme was out there, and Hollywood was willing to indulge. What fascinates me the most is seeing the majority of fans online typically be women. Whenever I mention these movies to guys (typically straight guys), the topic is usually accompanied by a sense of discomfort and a distaste for the films. I would love to watch these two films with a group of horror fans, even number of men and women, and have a discussion afterwards on what themes come to mind, and if one thinks this is the ultimate feminist film, or the biggest piece of garbage out there. 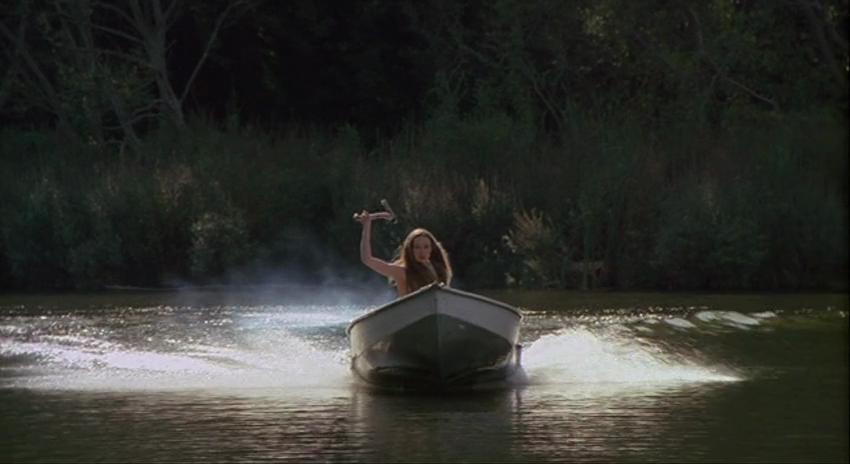