(Please Note: this version of Doom Eternal was reviewed on the PlayStation 4)

Stretching back as far as 1993 for MS-DOS, Doom has been an integral part of my gaming history, even as different iterations of the original pixelated rip ‘n’ tear franchise moved generationally through the consoles like the Super Nintendo, the OG PlayStation, Nintendo 64 and (cough, cough) the Sega 32X alongside the Sega Saturn, and, lest we forget, the oft-mocked Atari Jaguar. In 2005, Doom 3 roared to life—a hot-rodded horror-tinged first person shooter that focused on a richly developed story that pivoted away from the mindless fragging of past permutations.

Then, in 2016, Doom roared to life, giving trigger-finger gamers the heavy-metal mania that the players of the slower-paced 2005 third entry felt it lacked, and the juiced up iD Tech 6 engine that made the carnage spray off the screen with a bloody joie de vivre and left me with a smile permanently plastered in place and I mindlessly ripped and tore every single demon that dare darkened our main character DoomGuy’s doorstep. 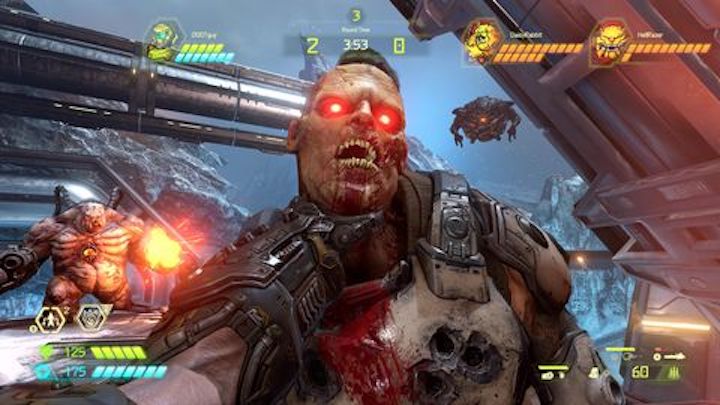 Now in 2020, the greatly anticipated sequel Doom Eternal has finally been pushed to consoles and let me tell you—the wait was worth it. As in 2016’s entry, Doom Eternal is light on plot, with the game’s primary plot focusing on killing three Hell Priests so that their continued harvesting of Earth’s energy will not lead to total decimation of the planet’s resources. It’s A to B to C, really, with your main goal being maiming, murdering, and massacring anything and everything that gets in your way. I get a thrill out of the way the DoomGuy (or Doom Slayer, as he is canonically known here) is revered as a hero to those who seek his help or feared by the innumerable demonic enemies that get in his way towards finishing his quest.

One detail that never gets old to me in movies or games is when a bad guy is ready to gear up for their evildoer monologue and are cut short by the actions of the hero and that happens quite a bit here, never getting stale for me personally. There are little bits and bobs of character elements sprinkled throughout that add layers to the story that we’ve played through all these years as you journey to the end of the game, most of which I wouldn’t want to spoil for you, because they’re quite fun to discover on your own. 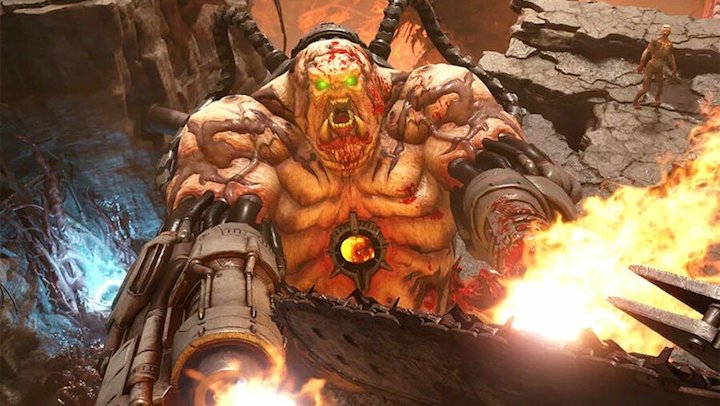 From the moment I put my headphones on—and they are a must–taking in the glorious sound design, the face-melting metal soundscapes composed by Mick Gordon had me salivating for the action to be unleashed (and let me tell you, it starts up right as soon as you jump in the game). You’re always in combat until the credits roll: it’s non-stop, breathtaking, breakneck arenas where you are gunning down your foes, chainsawing fodder demons (named so because they offer up health and ammunition when you “glory-kill” them) so that you have a fighting chance to tackle some of the bigger demons the battle loops have to offer. You will need it.

Even on normal difficulty, the fights were a struggle—a worthy struggle—because I never felt anger when I was killed. It was more of a persistence, like “this time, I won’t make the same mistakes I did last time.” Another new and crucial element is Doom Eternal’s “Slayer Gates,” which offer arena battles but at a higher intensity; these “gates” will push you to your limits but are intensely gratifying and will test your reflexes and when you finish them, you will let out an exhale of satisfaction for having finished it. The game will offer you stronger armor during some of the boss battles should you keep dying (which you will), even if you relent and accept, it doesn’t affect your endgame rewards. 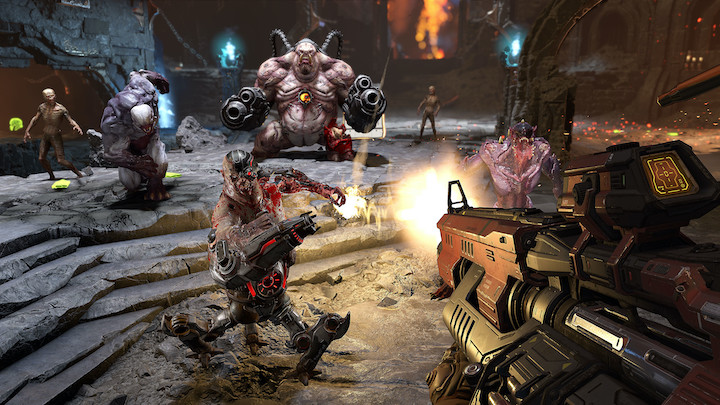 The levels are vast and semi-linear you’re always exploring new ways to approach combat and constantly mining every single corner for the myriad secrets of the richly design plains. Hunting down these secrets, in addition to battling the Slayer Gates, is key to strengthening your DoomGuy with the various and sundry upgrades that Doom Eternal throws at you. Not only are the upgrades fun (although some are merely cosmetic), they’re key to survival. There’s also a hub level—the Fortress of Doom—that you can explore in between missions, where you can trot around and look at the little collectibles that you’ve found (toy figures of the demons you’ve battled and listen to the music from the audio collectibles you’ve sought out), or use Sentinel Batteries (energy sources for the Fortress) to unlock other parts of your headquarters for extra upgrades. Tooling around the Fortress is incredibly neat. The graphics are much richer this go ‘round showing everything in gruesome detail. There’s a satisfaction to ripping a demon in half with your bare hands, or leaping up into the air to rip the eye of a Cacodemon (the big, floating meatball baddies) right out of its socket. 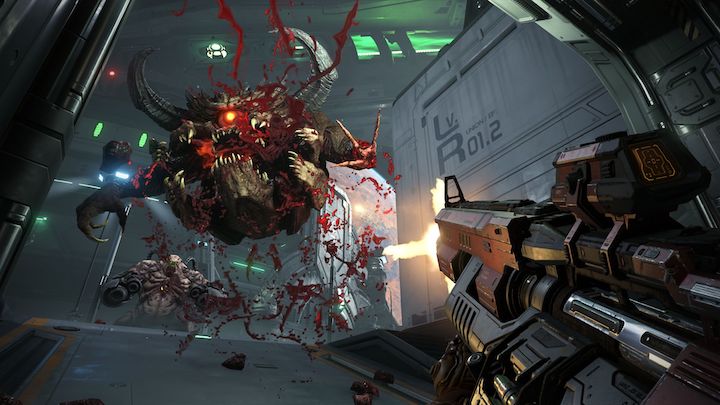 With all these positive elements, though, there are some negative aspects to Doom Eternal as well, with mostly minor quibbles that need addressing. Even though the 2016 entry wasn’t that story-driven, Doom ended with a massive cliffhanger in which DoomGuy was betrayed by the android doctor that was his ally throughout the game. The sequel here mostly sidesteps that, picking up sometime down the line with little to no mention of that ending. It doesn’t kill the game by any stretch, but left me scratching my head as to why it remained ignored.

The other is a gameplay issue because, for a game that has its core play mechanic as “maiming, murdering, and massacring,” it reduces some battles to strategic quarrels, namely with two new additions: the Doom Hunter and the Marauder. While they are fun to fight, the approach to tackling these foes is rather irksome—especially when replaying some levels with cheat codes, because no matter how powerful your weapon, let’s say a BFG-9000 with infinite ammo (the weapon that will destroy any foe), you simply cannot use it to kill a Marauder. It mutates the core gameplay, meaning now you have to slow down and plot your tactics when everything else is telling you to go in guns blazing. 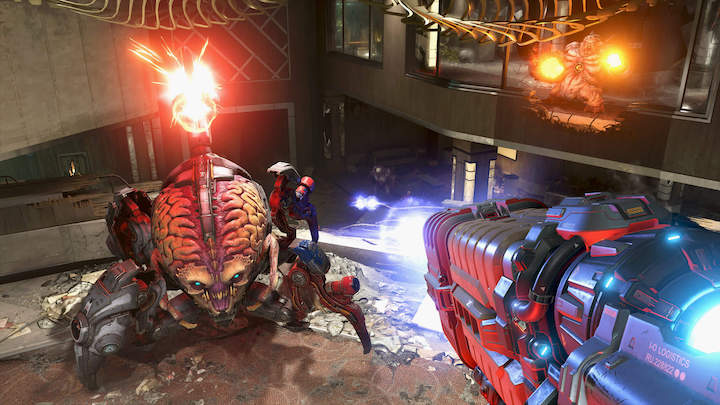 It’s no surprise to say that times are tough right now. At the time of this review being written, folks are experiencing their own hell on earth. It’s frightening and most people don’t know when they’ll get paid next, or when their loved ones might recover from this pandemic that has its stranglehold on the world. Anxiety is at an all-time high, and though $60 is a luxury few can afford right now, Doom Eternal is well worth the price of its admission. Simply because, for me—someone who struggles with anxiety on a regular basis—I felt some of that stress melting away as I gunned down my thousandth demon. So, yeah, the game is a high recommend.