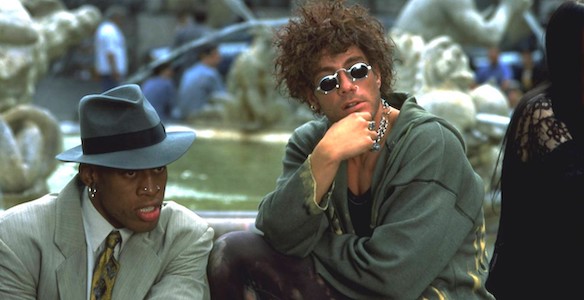 In order to truly understand DOUBLE TEAM, a noble scholarly effort that everyone eventually undertakes in their lives, you have to look at the incredibly idiosyncratic elements that collided together resulting in an action comedy directed by a Hong Kong filmmaking legend, led by a Belgian martial arts expert, with a former Hollywood superstar turned boxing joke turned character actor after botched plastic surgery as the villain, and featuring one of the most singular personalities and popular figures at that time. 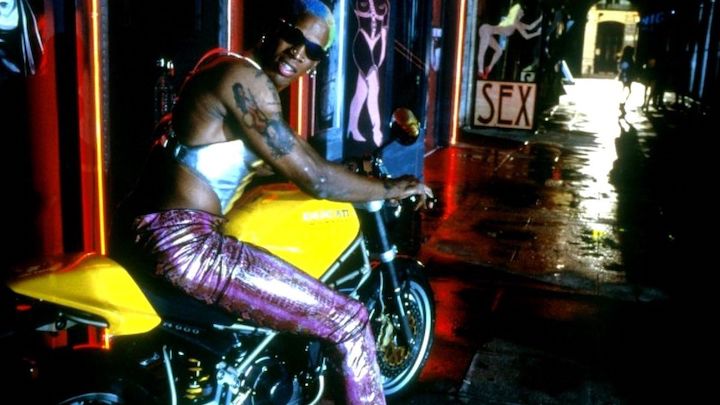 It’s hard to overstate what an absolutely huge star Dennis Rodman was in 1997. “The Worm” as he was known, was the last key player added to the 1995-1996 Chicago Bulls, the greatest professional sports team ever assembled and one of the all-time rockstar teams. Rodman wasn’t the best player on that team—Michael Jordan and Scottie Pippen were on the team, after all. He wasn’t even in the starting lineup some nights.

But there was no doubt who was the second biggest star on the team. Rodman was a great player who had a cool shtick, with his genderqueer punk rock look, he dated celebrities (like Madonna) and appealed to people who would never have watched the NBA, or any other sporting event. Half the pro athletes out there nowadays are covered in tattoos and have crazy haircuts, so it might be hard explaining what a big deal Rodman was back then. But he really was the first of his kind. 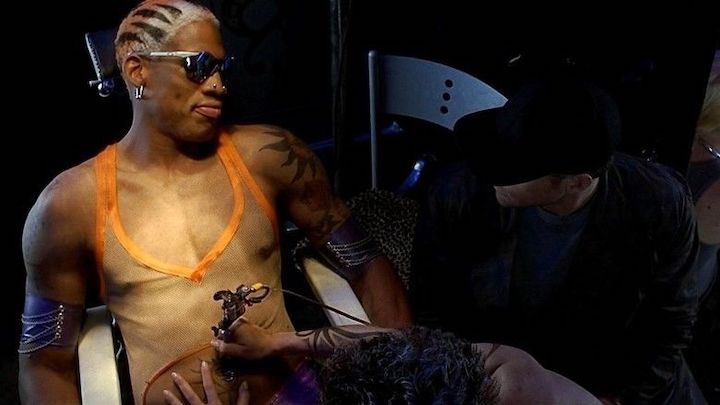 It was clear that Rodman was feeling himself. There was no doubt an asinine celebrity ego project was on its way. Was he going to release a terrible electronica album? Maybe make a celebrity sex tape?  I was stoked beyond belief to see this trailer for the first time, realizing that he was actually involved with something awesome—he was doing a movie with Jean Claude Van Damme. 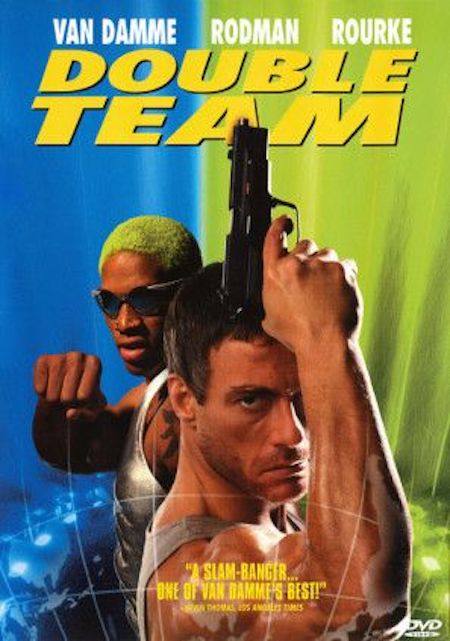 There’s no doubt that the two kings of B-action movies in the ’90s were JCVD and Steven Seagal.  Though I’m sure a Rodman/Seagal film would have been awesome as well, JCVD was clearly the better choice to co-star in a film with the Worm. There was always a level of silliness in a lot of JCVDs films (he played twins in DOUBLE IMPACT, for God’s sake!) and if anyone was really going to co-exist with this goofball jock Rodman, it was going to be JCVD. 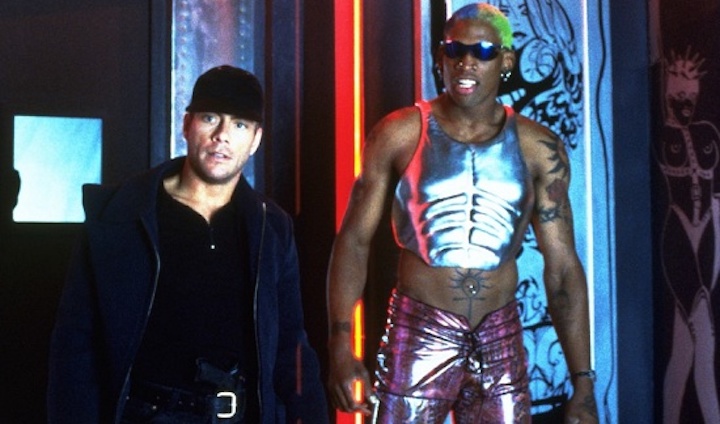 Which brings us back to this film, DOUBLE TEAM, directed by Tsui Hark. If you’re unfamiliar with his catalog (as I was), he’s a rather accomplished Chinese director who has cranked out 30 years of excellent films overseas including ZU: WARRIORS FROM THE MAGIC MOUNTAIN and all of the ONCE UPON A TIME IN CHINA series, amongst others. He came over to America and did two movies with JCVD (DOUBLE TEAM and 1998’s KNOCK OFF) and that was enough to send him back to Hong Kong, making hits like BLACK MASK 2: CITY OF MASKS and the DETECTIVE DEE series, but never to return to western filmmaking.

DOUBLE TEAM‘s script is credited to Cannon Films alum Don Jakoby (DEATH WISH 3, LIFEFORCE) and Paul Mones (THE BEAT), but the screenplay was rumored to have been passed around to dozens of writers over the years. Which makes sense, because there is way, way too much going on in this plot, even by ’90s action movie standards.

The plot of a good action movie should explained in one sentence. For example: “In TAKEN, Liam Neeson’s daughter gets TAKEN, Liam gets her back”. Easy, simple, to the point. DOUBLE TEAM went the other way with it. To recount the narrative of DOUBLE TEAM would go something like “the film starts with counter-terrorist Jack Quinn (JCVD) who’s on his last mission recovering a bunch of plutonium in a dump truck. Then, 3 years later, he’s brought out of retirement to go after his old nemesis Stavros (played by Mickey Rourke). After the mission goes poorly, he winds up in ‘The Colony, an institution for secret agents who…”

OH MY GOD just fucking stop it already! It’s an action movie, make it simple. It all winds up with Quinn and his friend, a flamboyant weapons dealer named Yaz (played by Rodman,) trying to get his family back from Stavros.

But no one wanted to watch this thing because they wanted a story to think about. This is one of the last big budget JCVD films, and even if the plot is stupid, it’s a lot of fun. We get a daring escape, JCVD drives a dump truck full of plutonium through a train, he fights a tiger, and we even get a pretty good fight between him and Mickey Rourke at the end. Oh, and there are some computer expert Monks in the film as well. It’s not BLOODSPORT, but it’s all pretty good stuff. 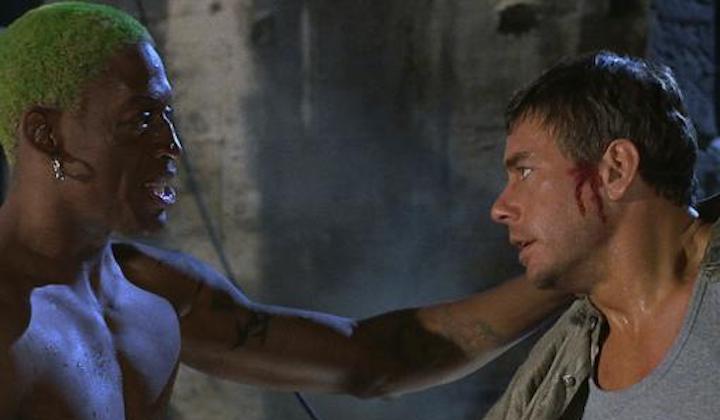 I’ve lived in Chicago my whole life, I loved those Bulls teams and Rodman as a player, and that’s why I like Rodman in this movie. But there’s no denying he’s a fucking terrible actor. He can’t deliver his lines for shit and more importantly for a movie like this, he’s a really clumsy fighter. Yes, at the time this was filmed he was a top athlete and a tough dude (ask any of the guys who he was guarding who got his elbows in their face) but he’s so tall and stiff that he looks painfully awkward fighting on film. The film also shoehorns in about 30 stupid basketball references, which must make no sense to anyone watching the film these days who doesn’t know who he is. 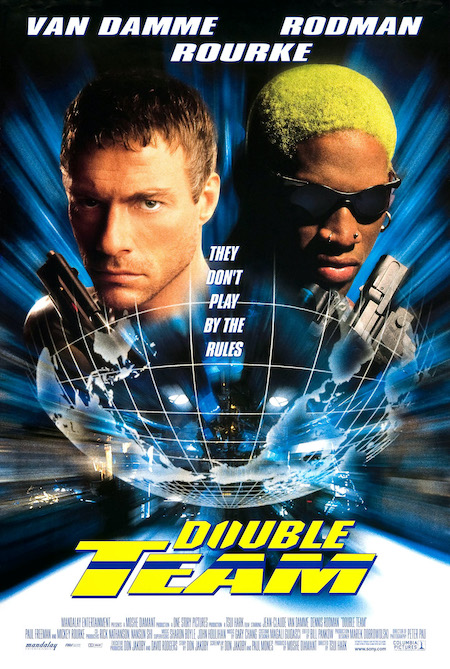 DOUBLE TEAM was a huge box office bomb (at least in America). It was the last JCVD-led film that was released in the theaters (JCVD would return in supporting roles, including as the villain of THE EXPENDABLES 2 named…”Villain”). Rodman went on to star in 1999’s SIMON SEZ, which was an even bigger bomb than DOUBLE TEAM, but was still a better film than SPACE JAM. JCVD went on to make about 400 DTV action films, and Rodman went on to broker World Peace as the world’s most well-spoken ambassador between America and North Korea, because of course he did. 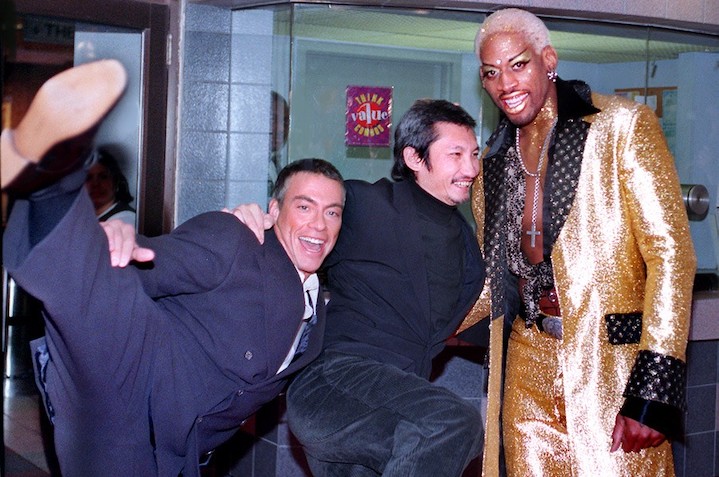