Home  ⁄  The Wire  ⁄  Possession, Premonition, and Resurrection: 30 Years Of ‘THE FIRST POWER’ 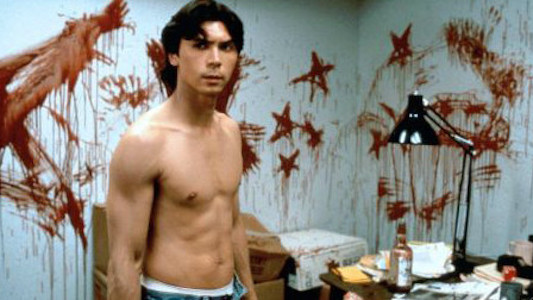 If you spend your life watching every movie you can get your hands on, especially in the horror genre, you’ll inevitably encounter titles you love and hate. Sometimes your wires cross and you watch a classic title that just doesn’t click with you (that’d be ROSEMARY’S BABY for me), but you’ll also come to love titles no one else on Planet Earth seems to give a shit about. For me, that’s THE FIRST POWER, which never comes up in conversation even among genre folks and which critics definitely didn’t like upon its 1990 release. That I’ve been watching this thing since I was a kid—waaay before I’d refined my ability to differentiate between legitimate quality and mere entertainment (and there is a difference)—has a lot to do with that. 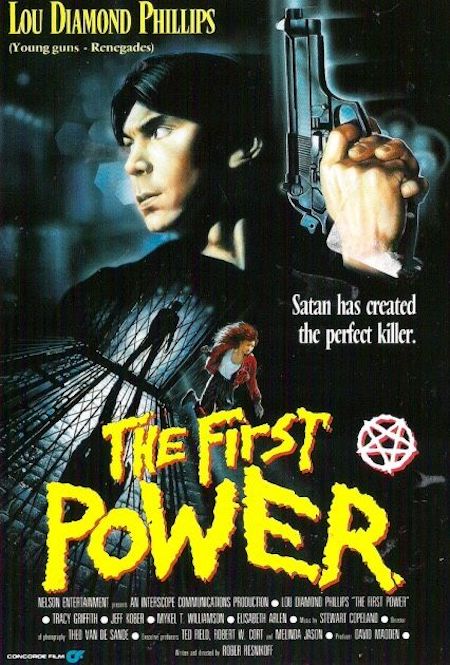 Lou Diamond Phillips (BATS, LA BAMBA) plays Russell Logan, a Los Angeles detective tracking serial killer Patrick Channing, aka The Pentagram Killer (Jeff Kober, TANK GIRL, lots of TV including The X-Files and Walker, Texas Ranger), who kidnaps girls and carves pentagrams on their bodies while wearing a creepy mask and saying prayers in reverse. A botched stakeout to capture Channing leaves Logan severely injured, but the killer is caught and executed for his crimes. Time passes, Logan recovers from his wounds, and everyone celebrates Channing’s demise…until the murders of people directly involved in his case begin—all bearing Channing’s modus operandi. 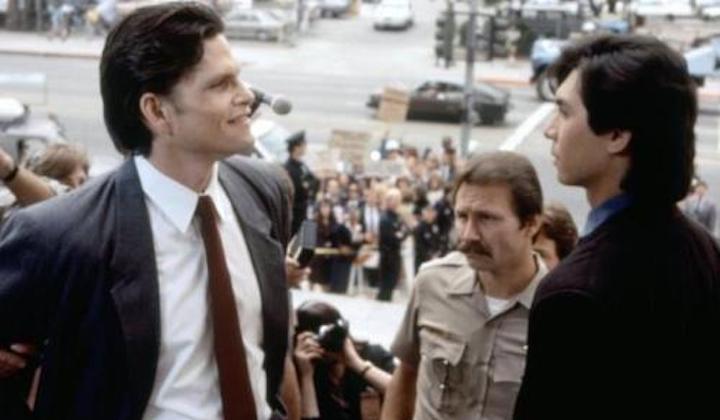 Mystified and extremely suspicious, Logan teams up with psychic Tess Seaton (Tracy Griffith, SLEEPAWAY CAMP III: TEENAGE WASTELAND) to hunt Channing’s spirit, which was freed from his body following his execution and can jump into any human host to continue his bloody crimes, all while taunting Logan with his ominous catchphrase, “See you around, buddy boy.” Along for the ride is Logan’s partner, Ollie Franklin (Mykelti Williamson, CON AIR), who thankfully manages to slip in at least one “kiss my black ass”—a requirement for every ‘90s cop movie featuring a black actor. 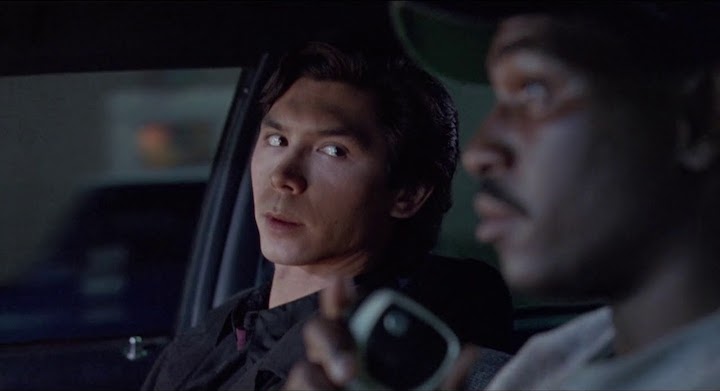 THE FIRST POWER takes the tropes of serial killers, the supernatural, and religious mythos and combines them in a way that’s both clever and reasonably believable (in a strictly cinematic sense). Writer/director Robert Resnikoff offers chilling direction, which is important in this sub-genre of true crime meets demonic possession (there are tons of these from the late ‘80s and early ‘90s), because if it’s not eerie or thrilling, then what are we doing here? Thankfully, Resnikoff is up to the task, as evidenced by several eerie and thrilling sequences that elevate THE FIRST POWER beyond the normal ‘90s genre slush pile. There’s the horse-led stagecoach race (you read that right) through the city streets, which is the moment where Logan discovers the crazy shit Tess has been telling him about Channing is for real. 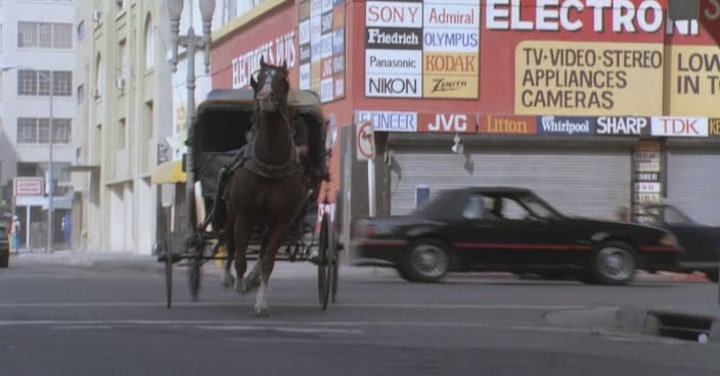 There’s the scene where Channing possesses a priest in a church, stands on top of the benediction table at the altar, and mocks the Christ crucifixion as a horde of disembodied voices whisper and laugh on the soundtrack. There’s the incredibly impressive and very real stunt in which a man jumps five stories off a building, lands on his feet on solid concrete, and walks away – all in one shot. 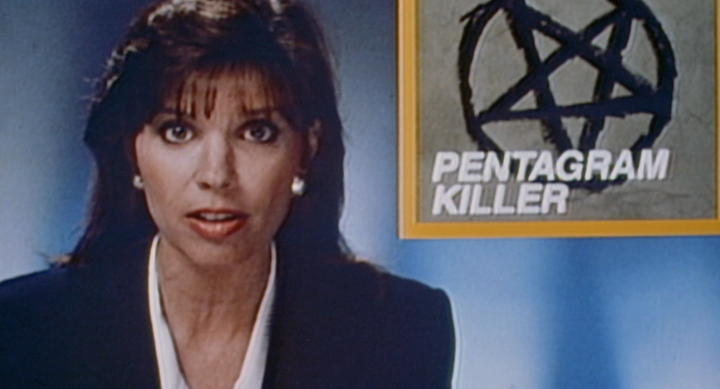 And there’s the excellent scene in which the body of a detective is discovered crucified and hung impossibly high off the ground under a bridge, captured in a shot that begins in a car-propelled push through a dark tunnel and ends with a sweeping shot to the detective’s mangled form. It’s an effective introduction to the madness Channing will wreak upon those who tried to stop him the first time and it’s also genuinely unnerving.

Like director John McTiernan, Resnikoff shoots scenes of action and horror from the protagonists’ points of view and often from far away. We, the audience, don’t have the kind of omniscient view we normally do; instead, we see what Logan or Tess sees, and from their faraway vantage point. You might think that would deaden the power of Channing’s presence, but in fact it heightens the power of his creepy imagery – it’s always the thing hugging the back corner of the frame, blurry and undefined, that offers more chills than the close-up ghoul face shrieking directly into the camera. 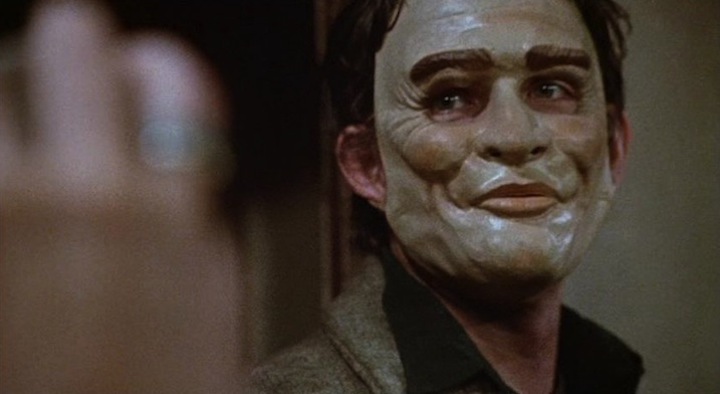 While THE FIRST POWER offers an array of this kind of frightful imagery, a large part of its suspense derives from not knowing who to trust at any given moment, because Channing could be in anyone. In keeping with this paranoid, trust-no-one influence of John Carpenter’s THE THING, the soundtrack by composer Stewart Copeland (of The Police) offers, appropriately, a melancholic and moody version of a Carpenter score, borrowing his repetitious and ominous style. 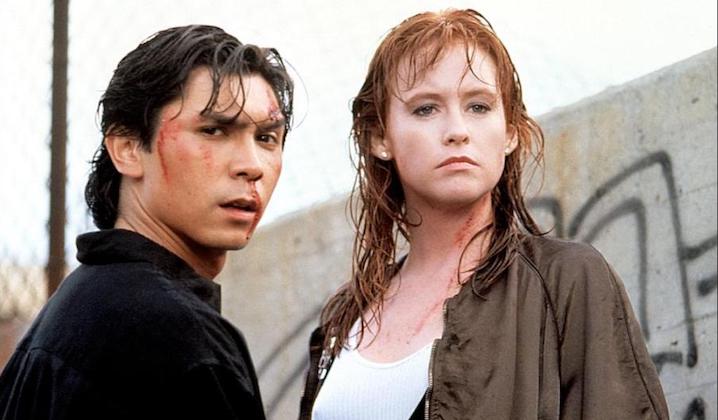 Thankfully, THE FIRST POWER is also well aware of itself, and Resnikoff wisely falls back on errant humor, both in dialogue and in circumstances. THE FIRST POWER can be grisly, eerie, and dark, so when the script allows Logan, Tess, or even Channing to say or do something ridiculous, it eases the tension to an acceptable degree. Some of this humor amounts to a quip or a puzzled look, but some of it straddles that line between gallows and downright vaudevillian, like when the killer rips a ceiling fan down from the ceiling and weaponizes it against our characters as it impossibly spins like a jet turbine.

It’s all because THE FIRST POWER wants you to be thrilled as well as have fun. It exists entirely within that movie world where rules are freely bent, and the tropes we’ve come to accept in more traditional cop-and-killer movies are gleefully included, like the hard-drinking loose-cannon detective, the irascible police captain, the killer with a gimmick, and the out-of-nowhere love interest. 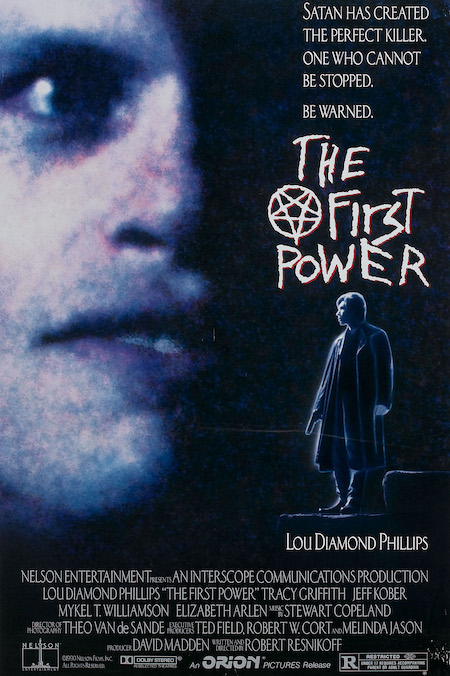 This genuflecting to cinema’s own calibrated rules is aptly conveyed when Sister Marguerite (Elizabeth Arlen), a minor character vital to the conflict who has a deep-seated knowledge of and obsession with the world of cults and devil worship, recites to Logan the Three Powers (backwards for some reason) shared between God and the Devil: the third power – the ability to possess other human beings; the second power – the ability to tell the future; and the first power – resurrection. Sister Marguerite believes the Devil himself has granted Channing the first power, and only one thing will stop him. From a dusty armoire, she retrieves an ancient looking crucifix. She holds it, as if in holy awe…and then this happens: 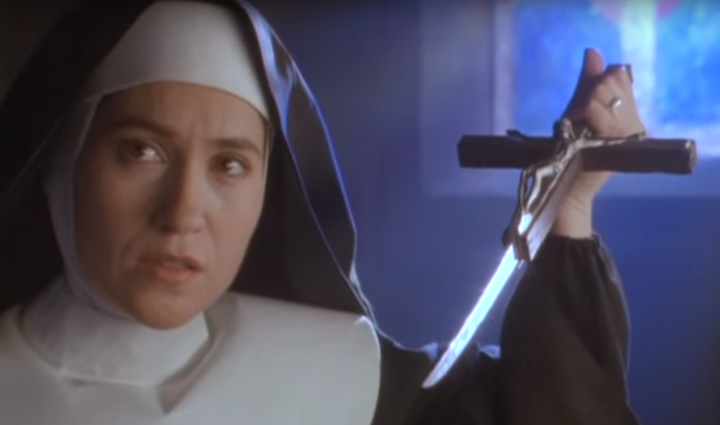 This reveal is a perfect summation of THE FIRST POWER’s main goal, which is to entertain at the expense of logic. THE FIRST POWER is not here to make you think, or stoically depict a battle of good and evil a la THE OMEN, or test your faith like THE EXORCIST. THE FIRST POWER wants to stab the killer to death with a fucking Jesus knife, and I am totally fine with that. 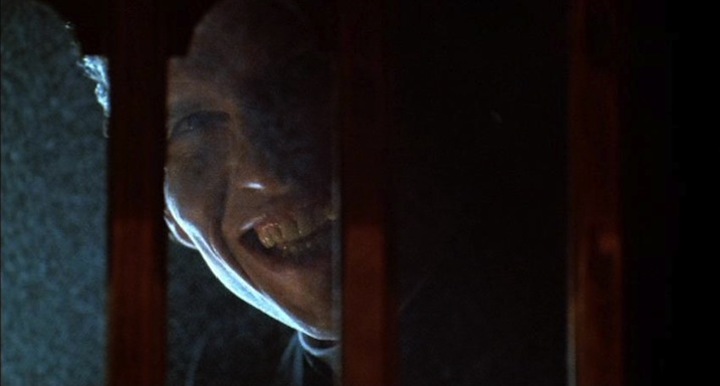 This summation even gets a shout-out in Vincent Canby’s New York Times review, which also gives you a good idea what “real” critics thought of THE FIRST POWER upon its theatrical release:

The action is fairly constant and some of the special effects are good, but the whole thing is seriously stupid. A rational thought is as fatal to this movie as the crucifix (which hides a knife) is to the changeable Patrick Channing.

Lou Diamond Phillips turns in a very Lou Diamond Phillips performance, playing a “cinematic” cop—the kind who drinks, forces civilians into deadly car chases, and breaks into the homes of persons of interest with no warrant on-hand. He even has a shoebox of explosives in his apartment filled with grenades, wires, and all kinds of boomy things. “A buddy on the bomb squad gave me this stuff for a rainy day,” he explains, like this is the most normal and ethical thing in the world. If he were a real cop, he’d be the worst cop, but he’s exactly the kind of cop THE FIRST POWER needs.

Meanwhile, Jeff Kober as Patrick Channing is a perfect villain. His hulking physicality, unusual looks, and baritone voice makes him a suitable foe, but luckily he’s a dependable performer too, and you absolutely buy him as a psychosexual serial killer. Somewhere in the world he is saying, “Hey, thanks!”

Strangely, director Resnikoff has nearly no career to speak of beyond this, even though THE FIRST POWER recouped double its budget during its theatrical run (according to IMDB), and, as they say in Hollywood, “You’re only as successful as your newest movie.” While he wrote a few films before this one, THE FIRST POWER isn’t just one of the only two features he directed, it was also his swan song, which is a shame because the skills he showed behind the camera would have led me into seeking more of his genre work.

With the right mindset, THE FIRST POWER is definitely enjoyable…but is it good? I honestly don’t know, (probably not), because I can’t be objective when it comes to childhood titles. What I can tell you is I’ll definitely be spinning this one well into my adulthood, regardless of how “seriously stupid” the flick may be.

See you around, buddy boy. 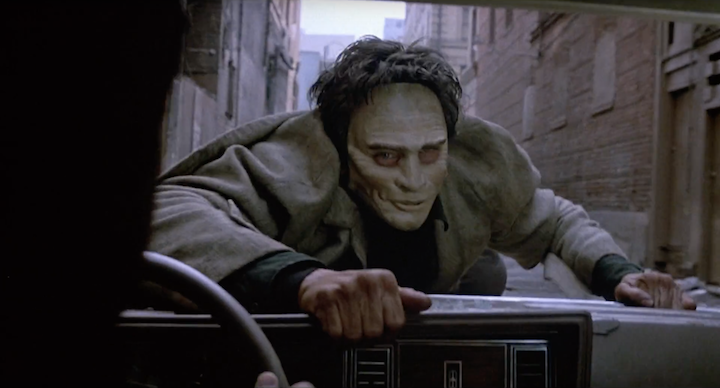