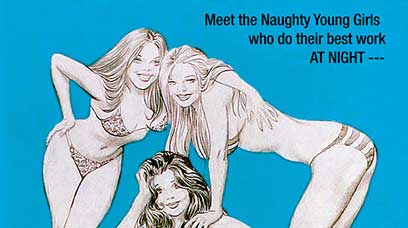 There was nary a female-dominated occupation that didn’t get fetishized in the golden age of ‘70s sexploitation films.  Roger Corman churned out sexy nurses galore, lonely fathers get busy with their babysitters, students were seduced by teachers and overseas, even the nuns got naughty.  With this in mind, it’s not too surprising that Sam Sherman’s Independent International Pictures released GAME SHOW MODELS in an era when the likes of “The Price is Right,” “Match Game” and “The Gong Show” were king – 1975 marked the year of the most game show debuts on network television, and Sherman was not one to let a popular trend sit by the wayside in an unsexy fashion.

GAME SHOW MODELS, however, wasn’t the leering sexploitation pic that Sherman sold in the film’s advertisements.  Instead, he’d renamed and added footage to a character-driven indie film directed by film student David N. Gottlieb called THE SEVENTH DWARF that features a male lead and very little of the new little critter.  Despite the contents not matching the package, the film had a long life, being re-released as THE HOLLYWOOD DREAM, THE HOLLYWOOD GAME, GAME SHOW and TEENAGE MODELS before vanishing into obscurity and never even landing on VHS. 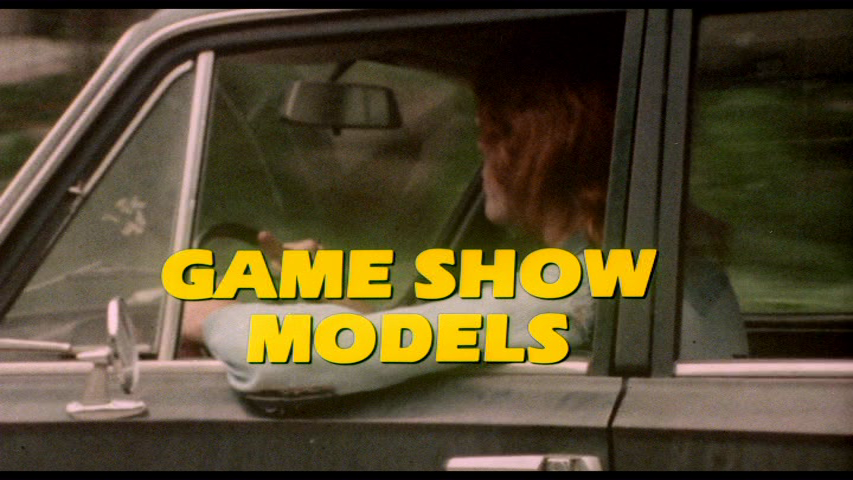 Vinegar Syndrome has done their usual fine job with digging up such obscurities, and it’s the TEENAGE MODELS artwork mixed with the GAME SHOW MODELS name on the front cover of their new release of the film.  Long available only via grey market bootlegs featuring shady transfers, viewers can now finally see one of the most intriguingly-titled T&A flicks of the era.

John Vickery stars as Stuart Guber, a young man who starts the film by leaving his dancer girlfriend Josie (future ROMANCING THE STONE screenwriter Diane Thomas) after being somehow inspired by a group of graffiti-tagging youths to go back to his “five year plan,” ditching his long red hair in the process.  He starts work at a PR agency run by the sleazy Roger Feinstein, an exec who beds models in exchange for exposure, but can’t get off unless they’re wearing Buddhist bride-scaring masks, which, as we learn in the prologue, he always has on hand. 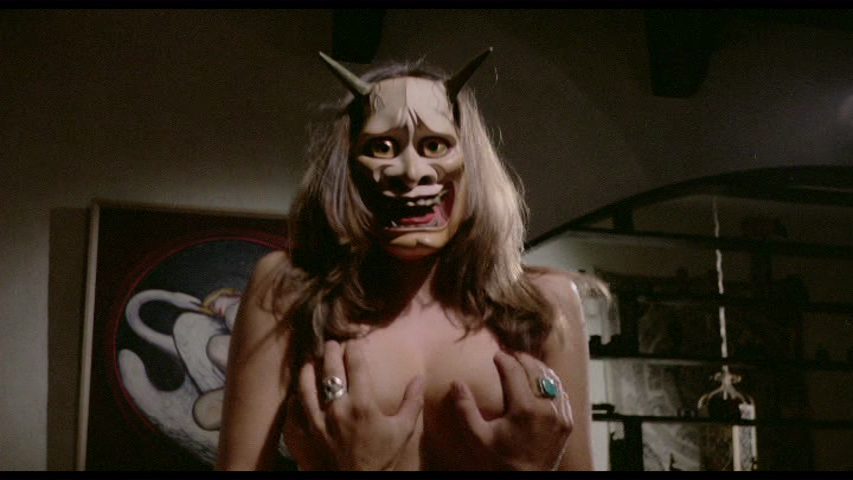 Stuart fits in well amongst the group of assorted shady types, including character vet Sid Melton as the old pro and Bill Elliot as the “token black.”  During a meeting with client Dana Sheridan (“Don’t Leave Me This Way” singer Thelma Houston), an up-and-coming rock star, Stuart stands out during a discussion on the names of the seven dwarves (hence the original title) and begins seeing her “little sister” Cici (THE BLACK GODFATHER’s Diane Sommerfield) on the side, much to the chagrin of her handlers and his co-workers.

Our bland hero’s life is complicated, however, when Cici starts acting strangely and one of his fellow employees (Nick Pellegrino) makes a move in a more friendly direction than he’d like.  In the end, he realizes that-shock!-the PR business is a shifty one, and he just wants to go back to being a rudderless dreamer. 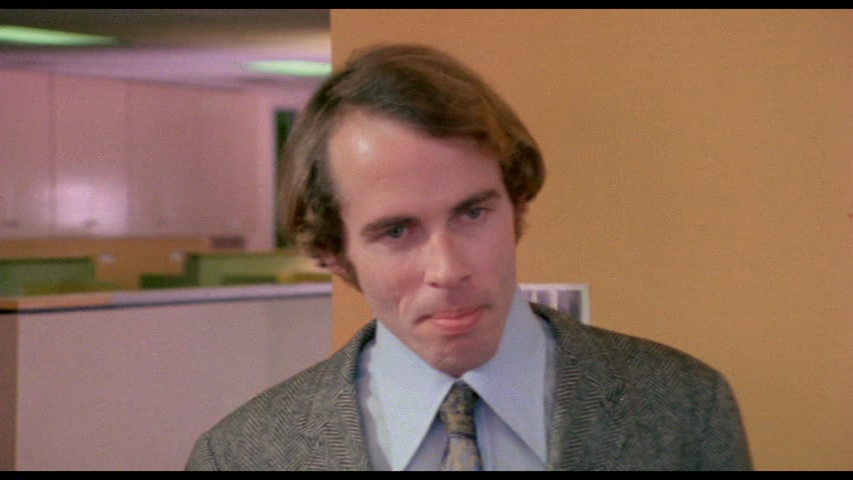 It may seem odd that this brief description is light on the, well, game show models of the title, but the truth is that there aren’t a whole lot of them.  There is the occasional diversion to a game show hosted by Dick Miller in which contestants pick their questions by putting their hands in a slot, behind which are many naked ladies to fondle like some sort of heterosexual glory hole, but it’s more like an excuse to get some boobs into the movie rather than anything else.  (While there is some additional nudity, it’s mostly brief and is certainly minimal for a 1977 film advertised as a sex flick.)

Blink and you’ll miss Cheryl “Rainbeaux” Smith. There’s also a cameo by film critic Charles Champlin and, despite a good soundtrack of memorable music (including Harriet Schock’s “Hollywood Town,” which is used as the backing audio for the main menu), no tunes whatsoever sung by Houston. 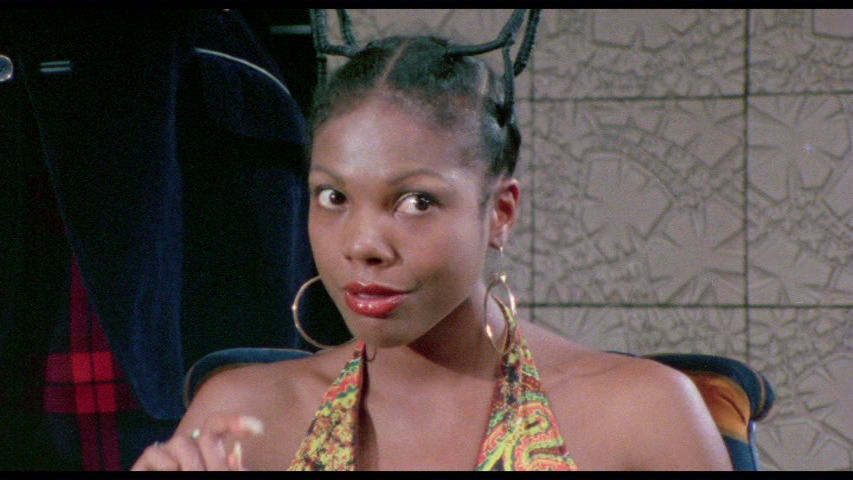 This last item is a bit par for the course for GAME SHOW MODELS.  It’s a sex comedy without a lot of sex and virtually no comedy, about an ad agency that doesn’t deliver what it promises, advertised as being about loosely-clothed pneumatic game show models but actually starring a dull guy filled with pathos and an unremarkable torso.  Stuart veers between coming off as a clueless dork and a pretentious asshole, and neither persona appeals enough to make GAME SHOW MODELS much of a drama either, so Sherman’s released cut skirts through 89 minutes of tedium, enlivened occasionally by supporting performances (Sommerfield is particular is a joy to watch, and Pelligrino ends up being more compelling than the lead) and some moderately dated banter.

Fortunately, the film can be re-evaluated thanks to Vinegar Syndrome’s presentation on the second disc, the original THE SEVENTH DWARF cut of the film.  A viewing of the National Endowment of the Arts-funded film makes you wonder what the hell Sherman was thinking by trying to turn this low-key anti-establishment character drama into a T&A comedy, as not only is the prologue gone and the sex scene between the two leads much shorter, but there isn’t a single mention of the game show in sight! 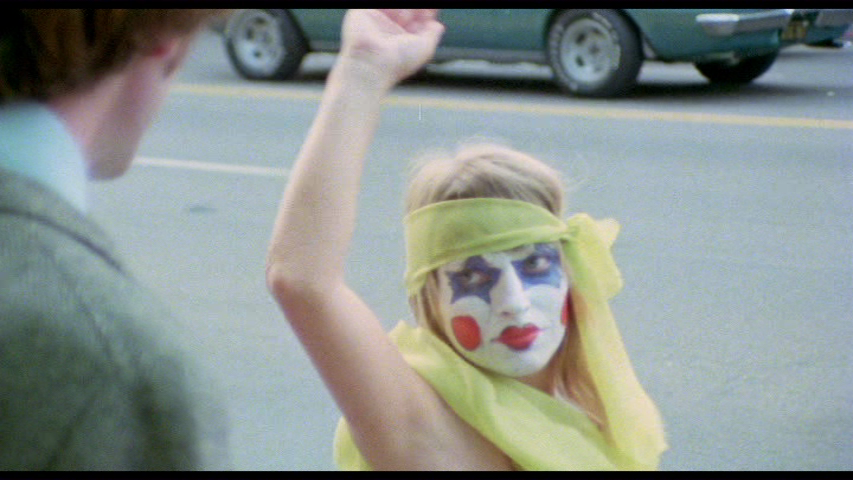 THE SEVENTH DWARF isn’t a great film by any means, but it’s much more thematically coherent than GAME SHOW MODELS, as the focus is entirely on Stuart’s slow disillusionment with corporate life.  Instead of occasional breast-filled holes, we get a long sequence in which Stuart has lunch with Josie and she tells him about how she ended up dancing on the street with her new piano-playing boyfriend after dating a Marxist.  It’s a mildly more engaging film, though it lacks the wit or bite to be a scathing take-down of the PR industry.  (I kind of wish SEVENTH DWARF had secretly been another PUTNEY SWOPE that languished in obscurity for years, ironically because it was released re-edited thanks to duplicitous publicity antics.)

The second disc also includes a collection of silent outtakes (audio is provided from unrelated scenes from the film) that appear to be mostly from the footage added to form the GAME SHOW cut, which is surprising as the clipboard on screen displays the SEVENTH DWARF moniker. 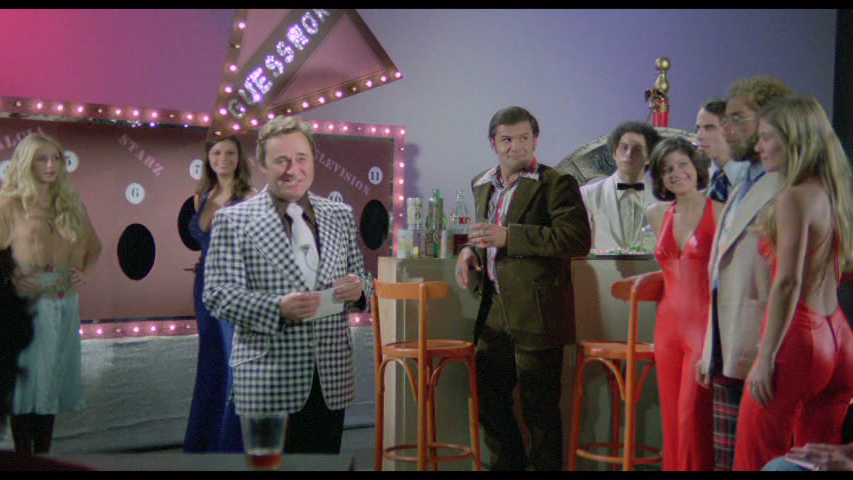 The presentation of GAME SHOW MODELS also includes a commentary track featuring director David Gottlieb, moderated by Vinegar Syndrome founder Joe Rubin.  It sounds like Rubin is watching the film but Gottlieb is not, making for an occasionally odd conversation, but Gottlieb is full of recollections of the film, addressing its occasionally schizophrenic nature and remembering where exactly many of the locations were.  He also mentions his previous directorial efforts, the Jonestown documentary PEOPLE’S TEMPLE and the unavailable BIRTHDAY BIRD, in detail, leading to a fascinatingly intimate look at California-based independent filmmaking and distribution of the ‘70s.  (I would have loved to hear Sam Sherman’s takes on the film’s multiple releases and renamings, but he seems to have limited his interviews over the past few years.)

GAME SHOW MODELS may be a film that’s more intriguing to read about than to actually watch, but it’s certainly not without merit, and Vinegar has done a fine job with creating an intriguing package around a fairly unmemorable film.  The transfer may not be up to the standards of their Blu-Ray editions (a mildly distracting blue line pops up during Stuart and Cici’s first “date” in both versions) but it’s certainly the best the film has looked in decades, and those with a love for the drive-in cinema of the era (or the Los Angeles of the era, which the film utilizes masterfully) shouldn’t hesitate to check it out. 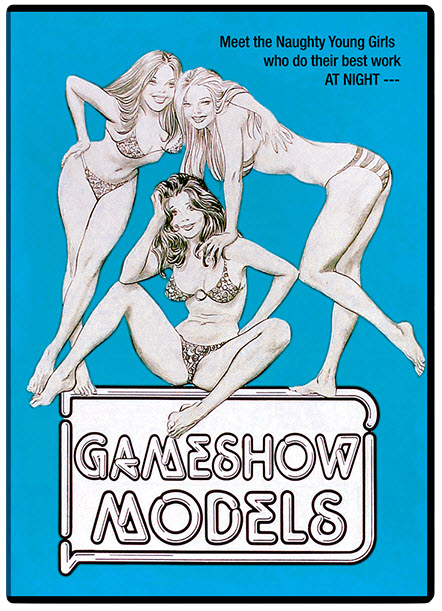