In a retrospective documentary on the film, Fred Olen Ray mentions that HOLLYWOOD CHAINSAW HOOKERS was originally just titled CHAINSAW HOOKERS, and that the HOLLYWOOD was added at a producer’s request. It’s hard to believe that, as the additional word makes all the difference. CHAINSAW HOOKERS would have blended it with countless other hooker films on video store shelves – VAMPIRE HOOKERS, CANNIBAL HOOKERS, HOOK – but adding a little location just makes the title roll off the tongue with ease. CHAINSAW HOOKERS can just be from any ol’ sleazy corner of the world. Placing them in Hollywood gives them glamor, and glitter. Fashion. And fame.

And Ray’s HOLLYWOOD CHAINSAW HOOKERS is truly outrageous, a ridiculously goofy spectacle that lives up to the promise of its name and utilizes its brief 75-minute running time as effectively as you could hope for. It is, above everything, just plain fun, and even though it features enough boobs and blood to warrant a lack of an MPAA rating that kept it confined to late-night Cinemax screenings and off of the “USA Up All Night” airings its sense of humor would have fit perfectly into. 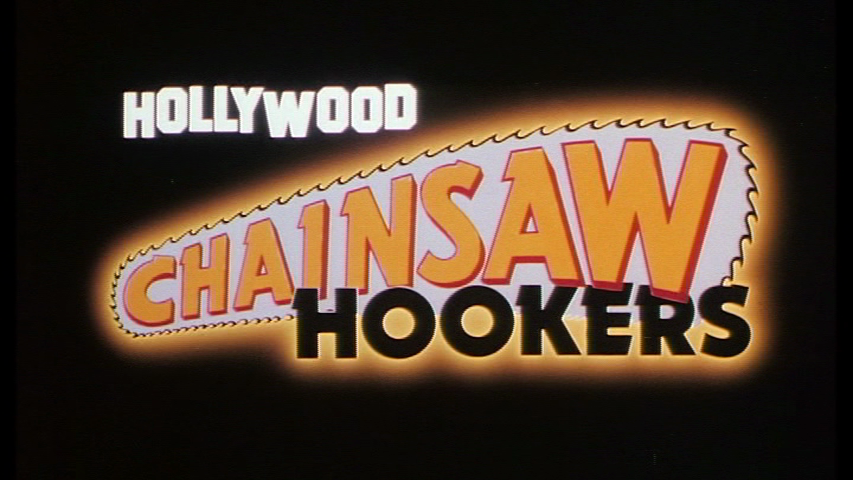 HOLLYWOOD CHAINSAW HOOKERS has been just re-issued on DVD, and while the presentation isn’t notably different from the film’s 2008 release on the format (the 20th Anniversary Edition), it’s certainly nice to see the flick back on the shelves. It’s a perfect example to the type of entertainment that brought eager-eyed young fanboys (like myself) into the cult movie fold, a cavalcade of sexless nudity and goofy violence presented with a tongue so firmly in cheek that you’d swear it was poking out the other side. It’s about the most likeable, least mean-spirited movie about chainsaw-wielding prostitutes that you could possibly imagine.

The hard-boiled deadpan narration from the flask-swilling Jack Chandler (Jay Richardson, who is terrific) sets the tone perfectly, promising a tale set in “the kind of dark, quiet sleazy place where dark, quiet sleazy things happen on a regular basis.” “Quiet” is certainly up for debate, as there has been a series of chainsaw murders in the area, making Chandler’s job of finding a young runaway (Linnea Quigley), whose story he explains as “Daddy bounces her on the wrong knee one too many times, she goes looking for a new daddy,” much harder. 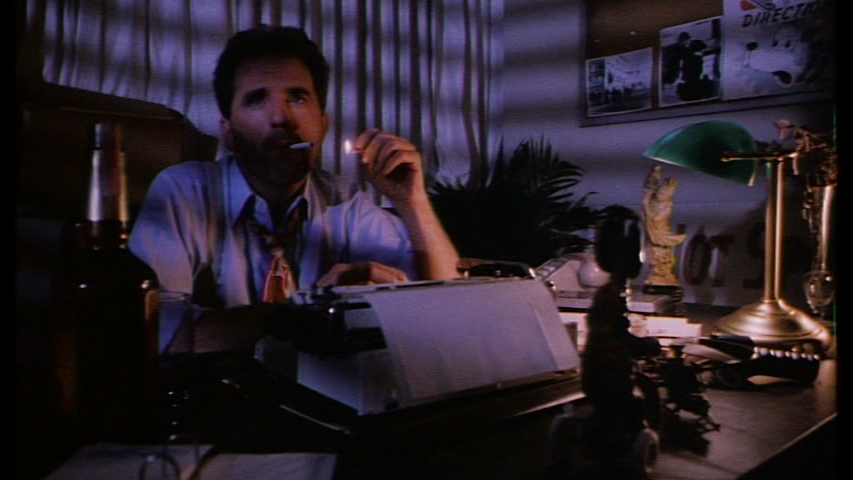 The murders themselves are being performed by that old standby, the ancient chainsaw worshipping cult, headed by hooded figure Gunnar Hansen, whose (relatively small) army of prostitutes specialize in a “love ‘em and cleave ‘em” service. But Gunnar’s not the highlight – the focus is on the ladies he utilizes, including Michelle Bauer, who carefully covers her Elvis painting with plastic wrap before slicing down on a victim, and Esther Elise, who offs a john (the great Fox Harris) during his attempt to film her for a baseball bat-themed nudie calendar (“All the Little Leagues just love ‘em!”).

The murder sequences themselves are just plain ridiculous, as blood and fake limbs are tossed from off screen onto the ladies’ naked bodies as they cackle with glee, and Ray and screenwriter T.L. Lankford treat the proceedings like an extremely splattery Zucker Brothers film. It’s quickly-paced, filled with (often terrible) gags and over-the-top performances and gives you pretty much exactly what you’d hope for from a movie called HOLLYWOOD CHAINSAW HOOKERS – assuming you’re not expecting something actively sordid. It’s a great showcase for the era’s scream queens as well, with Quigley doing the “virgin dance of the double chainsaws” and Bauer and Dawn Wildsmith showing off not only the bodies that made them the GoreZone pin-ups they were, but the charisma that encouraged viewers to watch them even in a movie where the “good parts” were cut out. 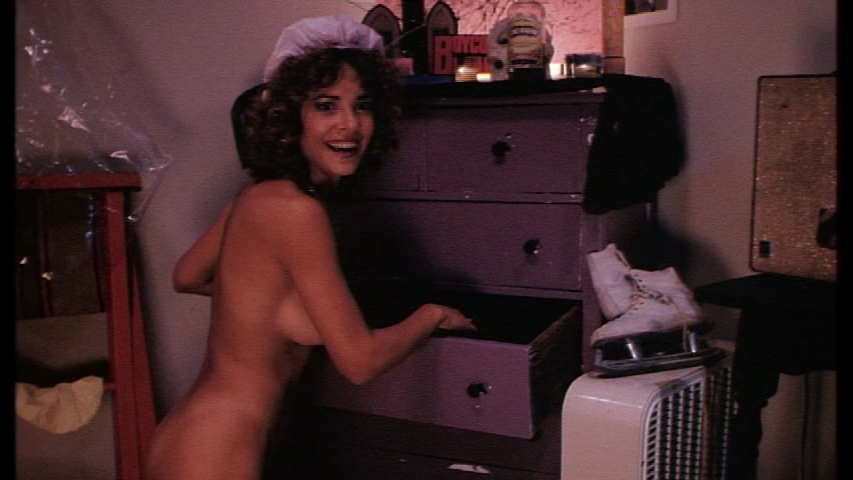 As mentioned, the re-released disc is essentially the same as the 20th Anniversary Edition, but while there are no new features, the ones brought along for the ride are more than enough for a fan. The commentary track featuring Ray and Lankford is excellent, with the pair talking energetically about the film in detail and dishing out some nifty trivia notes, such as identifying the opening narrator as Ewing “Lucky” Brown, the actor who’d appeared in THE ASTOUNDING SHE-MONSTER!

The aforementioned retrospective documentary, shot in 2001, features Ray, Bauer and Quigley, and they each have a fair share to say about the film, including Bauer talking about the film’s connection to the Grace Jones film VAMP. A trailer is also included, along with the introduction featuring Ray and Miss Kim (Kimberly A. Ray) shot for the film’s 2001 release with the warning that offers mentioned in it are no longer valid.  The transfer itself, from a negative and featuring the correct 1.85:1 aspect ratio, suffers from a little pixelation on HD televisions, but it certainly perfectly watchable. 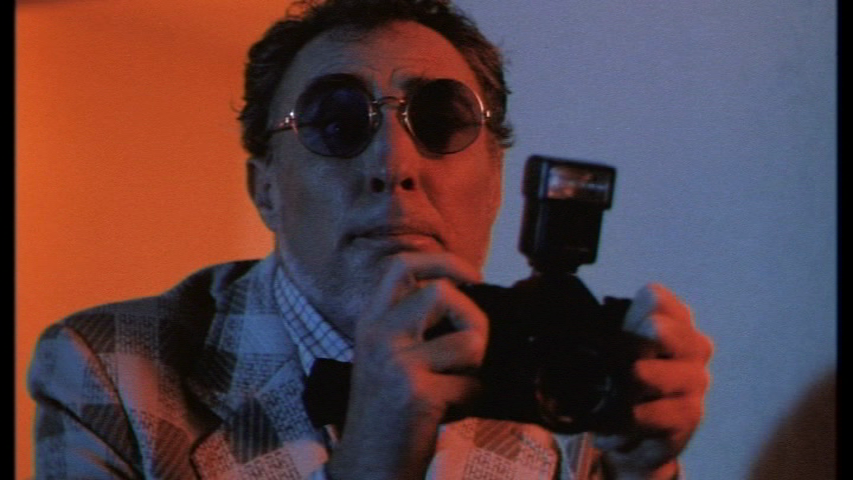 Those expecting a serious, graphically violent tale of sleaze will no doubt be disappointed by HOLLYWOOD CHAINSAW HOOKERS, but that’s just because it’s not that kind of film – it’s a screwball comedy with plenty of female nudity and unconvincing bloodshed, a beer-and-buddies late-‘80s cable experience that emerges as a fine way to spend 75 minutes of non-productive time.

Heck, even Greg Kinnear was all about it: 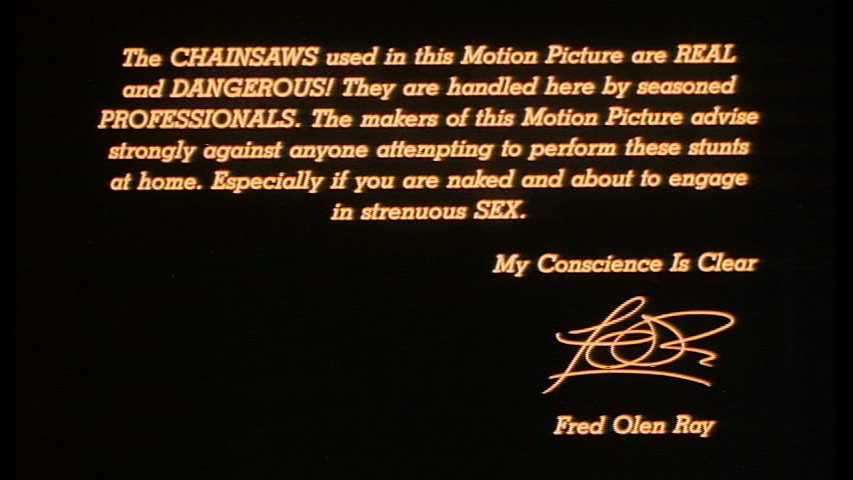