Spend enough time with anything and you begin to notice the cliches inherent within it. Movies, shows, books, music, all of pop culture. Relationships, working, school, health, all of life. So on and so on. They are nothing so much as an endless loop we all find ourselves destined (or cursed) as humans to repeat for as long as we exist. Right now, a year after the world has lost a true icon of the horror genre — a cinematic maverick who without question will influence those who follow for generations, not years — one very specific and apt cliche continues to come to mind: you don’t know what you’ve got until it’s gone.

Sadly, Tobe Hooper is gone. As always when we fans lose a hero, it’s particularly painful and not an easy thing for many of us to talk about what it is we have lost. But take a look around the internet and you’ll see that we’ll be damned if we’re going to forget him. We refuse to take his work for granted; the gifts he gave us over a long career still contain treasures inside. Maybe too many of us didn’t realize just how great he was, and didn’t appreciate him enough while he was with us. Then again some knew EXACTLY what it was we had in an artist like Tobe Hooper (yes, I very deliberately used the worde artist, because he unquestionably was), and our hearts ache all the more for his passing. So what then is left for us to do?

We share the love of Tobe Hooper. Speak the word of Tobe Hooper. Spread the news about Tobe Hooper. Rejoice, brothers and sisters, for while this great man may have shuffled loose this mortal coil, his works remain — happily thrust into your hands by a devout fan, praised in endless conversations, discussed on numerous podcasts, examined through thousands upon thousands of words written (ahem), and all but exalted from the heavens while chuckled over in hell. This is a man who left a LEGACY, as did the masters before him.

It would be easy to discuss his best known work, one that many well-regarded connoseuirs of our beloved genre feel is the greatest horror film ever made: THE TEXAS CHAIN SAW MASSACRE. But no, I won’t be doing that. Far better than me have done so (read John “Joe Bob Briggs” Bloom’s astounding account of the making of that masterpiece for a sterling example of this) and I don’t think I have anything essential to add to that conversation. What I would like to talk about here, however, is a film of Hooper’s that still remains unseen by many, decades after its release. Indeed, I myself only saw it for the first time just a few years ago, and I couldn’t even provide a quality reason as to why it took me so long aside from “I don’t know, I just never got around to it.”

(How many times have we said this about a piece of art while currently kicking the absolute shit out of ourselves over having taken so long to do so?) 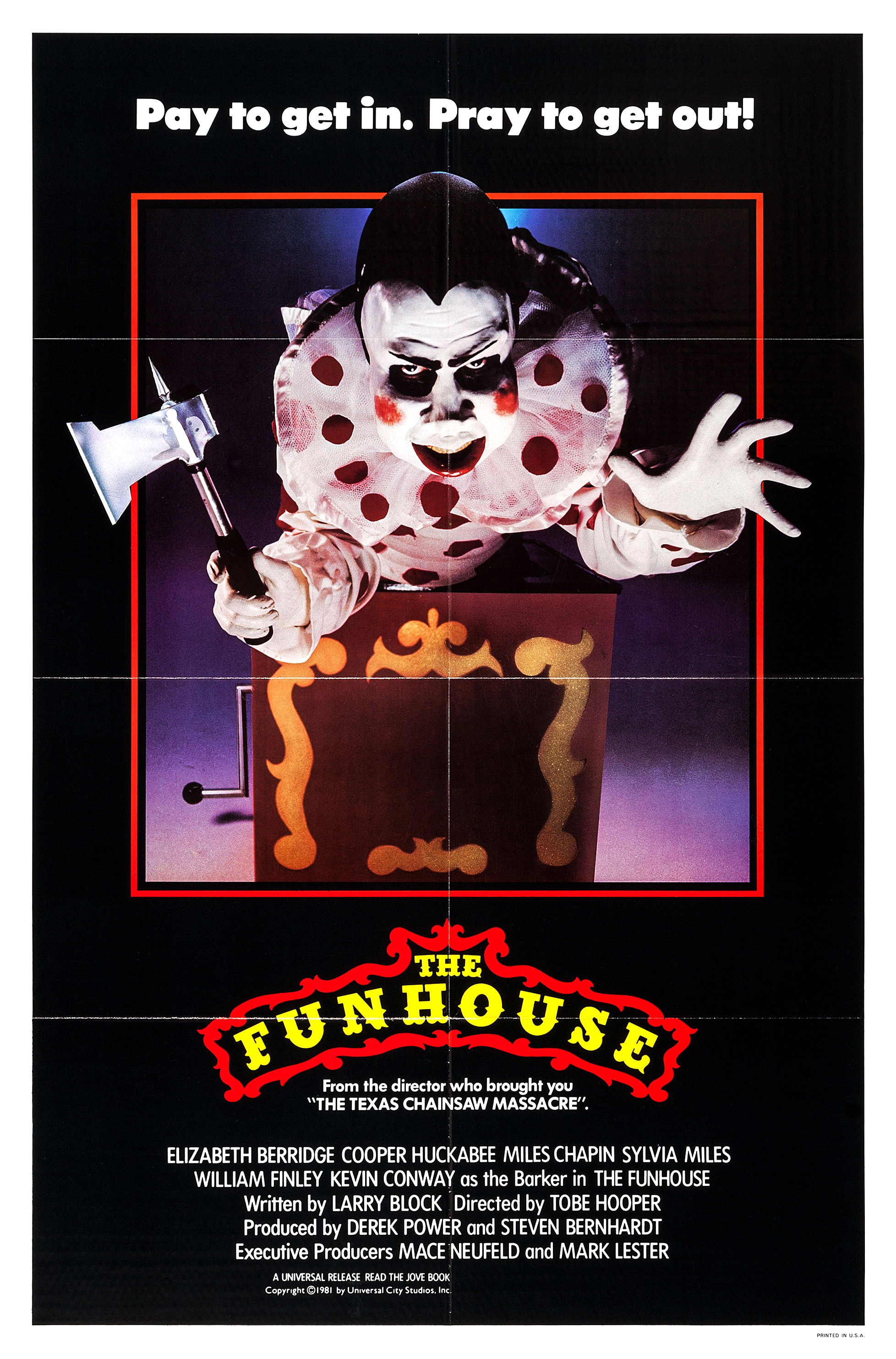 Friends, that film is 1981’s THE FUNHOUSE, and it is Something. I have very intently been kicking the shit out of myself for the last few years over having taken so long to get around to it, and I write this today in the hopes that *someone* may read this and decide to finally take that plunge, because goddamn…is this movie worth it. There is a lot of fun to be had in its style and approach to delivering the genre goods, and in many ways said approach strikes me as quite similar to the actual carnivals of the late ’70s and early ’80s that comprise the setting for most of the film: a palpable sense of being proudly disreputable and a real joy in completely fucking with the squares unlucky enough to wander by. This is probably best personified by the wonderful character actor Kevin Conway, who plays three different roles in the film, mainly the chief antagonist. But perhaps I’m getting ahead of myself…

The story and setup couldn’t be simpler: four young people (two couples on a double date) decide to go to the carnival that’s in town. They wander around for awhile, taking in the sights and sounds of the sprawling joint — almost the entirety of the first act is just them going from attraction to attraction, such as checking out a magic show (is that Bill Finley? THAT’S BILL FINLEY), engaging in some stimulating and educational culture like peeking into a burlesque show, and broadening their horizons with a good-old fashioned freak show (all of these boast the aforementioned pride of both fucking with unsuspecting local marks as well as feeling somewhat dangerous and more than a little sleazy). It’s all fun enough until the dipshit of the group — there’s always one and they tend to be just stupid enough to think they’re smart, Stuckey from SOUTHERN COMFORT will forever be this type’s poster child for me — decides what would really be a scream (they have no idea) is sneaking off the ride inside and spending the night in the titular funhouse. Once inside, they end up witnessing a murder, getting discovered, and spend the rest of the running time scampering around and hiding from a deformed killer that essentially puts a monster into what could be described in its barest sense as a slasher flick. As you do.

Not much of that is inspiring to look at. Even in 1981, it had all basically been done before. What Tobe Hooper brought to the table, however, was his very distinct and aggressive style of horror which distinguishes it in a huge way from anything you might be reminded of. What he brings, to get right down to it, is what always made Tobe Hooper stand apart from his contemporaries and other horror masters, and that is his pure ability to provoke a sense of confrontation.

Tobe Hooper’s movies do not have much interest in being the cold finger on the back of your neck that make you spin around and gasp when there’s nothing there, no. Tobe Hooper’s flicks are flat-out hurled at the back of your neck. They squeal, slimy and rotted and clenching, and before you can even react they clamp your shoulders in their clawed hands and turn you and then they are SCREAMING in your face as they shake you like a rag doll. When I watch the most effective horror movies Tobe Hooper ever made, I’m reminded of something Stephen King said about British genre writer James Herbert back in the early ’80s (in his stellar nonfiction book DANSE MACABRE— read that shit if you haven’t), which I’ll paraphrase here: “James Herbert doesn’t just write horror; the man puts on his combat boots and goes forth to assault the reader with horror.” 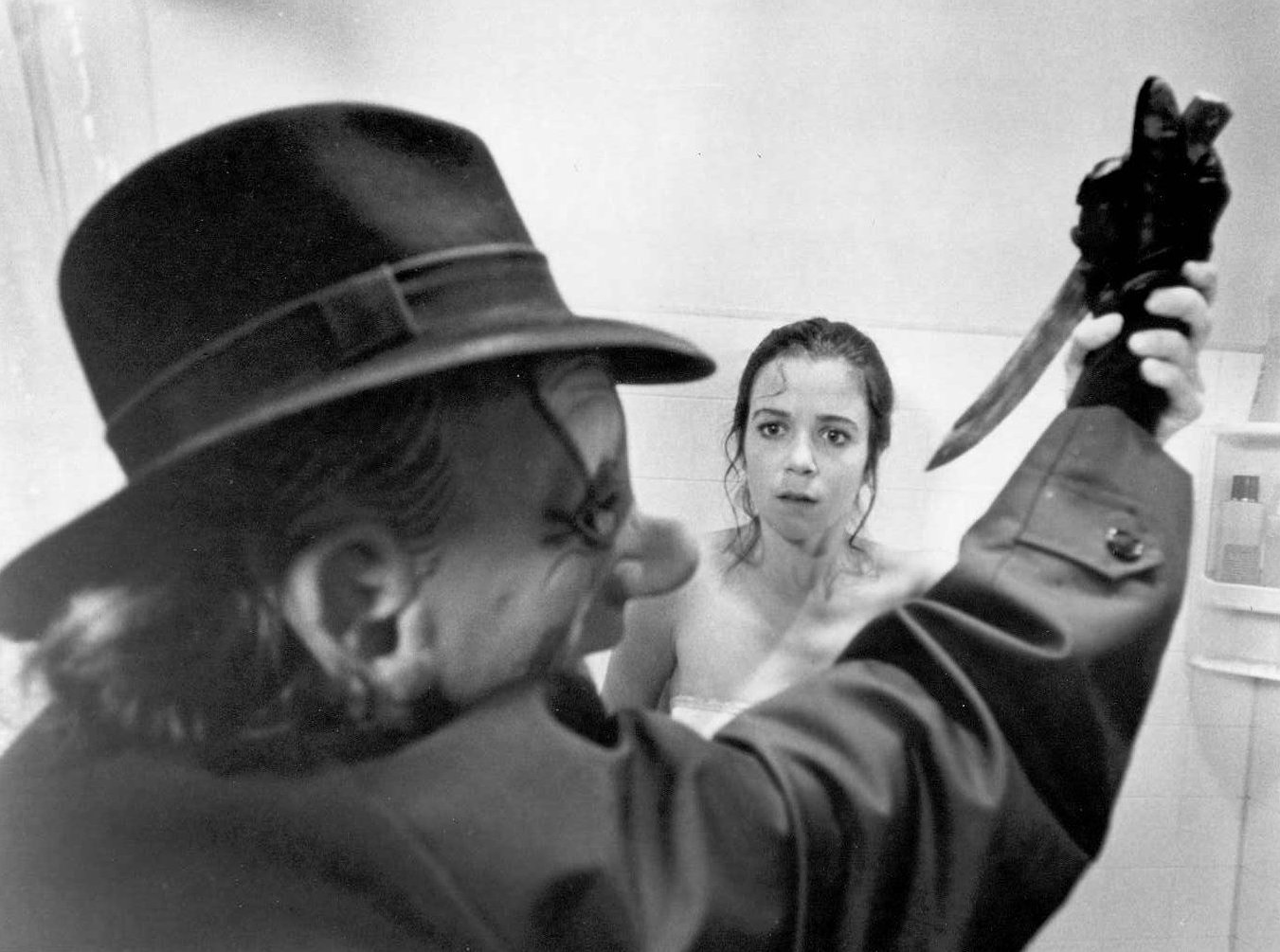 That’s precisely what I feel Tobe Hooper does. He is not fucking around, and he is goddamn well coming to get you. He wants you uncomfortable. He wants you to fear for your safety whether you’re in your own home or surrounded by people in a theater, and make no mistake, the dude could do that. The visuals in THE FUNHOUSE are to a degree more stylish than anything Hooper had done previously, a result of him finally getting a chance to play with Universal studio money — but he uses those to hurt you. The wild and bold use of colors he’s pulled out of his bag of tricks once the movie is inside the funhouse are certainly striking but never feel “beautiful” to me in the way that someone like Mario Bava would use them. These colors are garish and sick-feeling. The sound design is crazy intense — huge clangs and screeches and hisses and all manner of shit to keep a viewer on edge and I’m not even getting into the screams. These characters fucking SHRIEK and when you’re really in it, experiencing it, it feels like there is constant screaming throughout the final twenty minutes of the movie. (Which is not the case. There are probably six cumulative minutes of screaming over that time period.) All of these contribute to that overall effect I mentioned earlier and help create that feeling that yes, you ARE experiencing this, but not in any traditional sense: bottom line is that Tobe Hooper was, for my money, the single greatest horror director of replicating what it feels like to experience a nightmare. I don’t mean his movies operate according to nightmare logic, as flicks like THE HITCHER or SILENT HILL do, but they possess a very clear *feeling* of a nightmare, the kind you can’t wake up from. The ones where you futilely keep trying to close your eyes but still see, clap your hands over your ears but those horrible sounds you can’t bear hearing anymore only rise in volume until they overtake everything else and you feel unhinged. 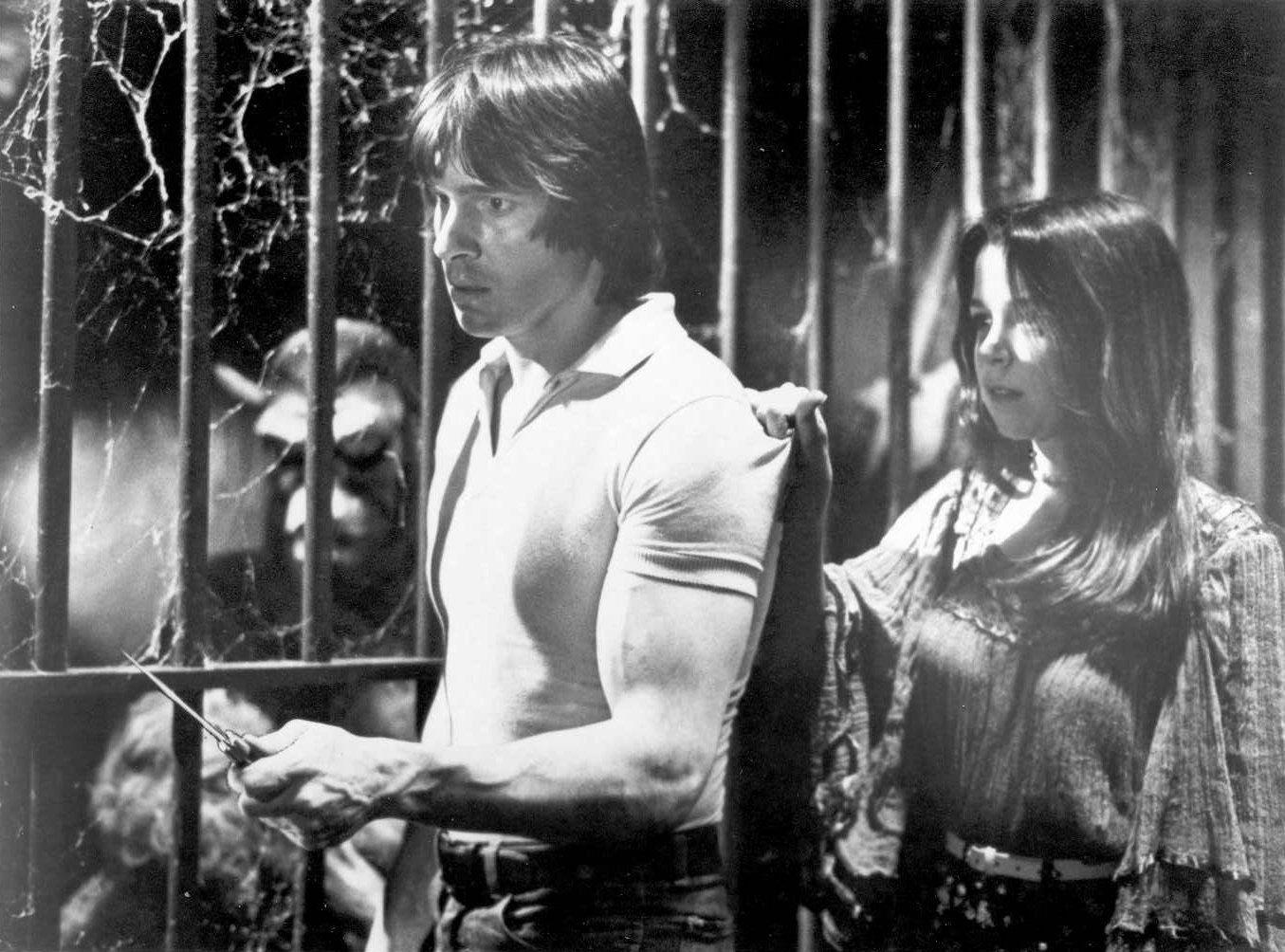 That’s the screaming of the characters (ones in Hooper’s movies never suffer in silence) you’re trying to get away from and can’t. What you can’t unsee is the terrifying visage of the monster — here we have Tobe not just taking advantage of the Universal connection to include footage from their classics on TV in an early scene, but also the sense of tragedy their monsters almost always had, as this one certainly engages in unspeakable acts while lost in awful rages yet is also used as a tool by Conway’s manipulative villain. It all results in what I will always think of as a nightmare on film. With THE FUNHOUSE, as with most of Tobe Hooper’s finest hours, when you finally feel the terror is over… you feel safe again, or at least as safe as you can right then and there… there’s only one logical reaction that sensation can elicit, and that’s an involuntary sigh.

The kind you have when you wake up covered in chilled sweat and clutching the sheets in white-knuckled hands as you realize it was all just a dream.

Tobe Hooper did that more than once, my friends, and he made it look easy. I miss that, and I miss him. I believe we always will. But we’ll always have the nightmares.