The second outing of any artist — particularly one coming off a near-universally praised debut—is always an interesting project to behold. For many, whether it’s a novelist, painter, filmmaker, playwright, comics artist, or anything else, it’s a time of great pressure and also great opportunity. Some choose to swing for the fences as boldly as possible because they know they will never have the ability to demand as much as they can at that moment. For others, it’s a time to pare down and turn inward to become even more personal. The “sophomore slump” is a real concern for many as large swaths of artists have flamed out trying to one-up themselves or simply proving to be a one-trick pony, with the ghosts of those failures haunting all second creative endeavors. Robert Eggers exploded onto the scene with his debut feature film, THE WITCH; it captivated audiences, amazed critics, and has rightfully taken its place as a new modern classic of horror. The director (and co-writer, alongside his brother, Max Eggers) returns to theaters with THE LIGHTHOUSE, a dazzlingly crafted film with exceptional performances that unfortunately is weighed down by its overuse of allegory.

In the late 19th century, Ephraim Winslow (Robert Pattinson) starts his new vocation as assistant lighthouse keeper on an isolated island off the New England coast. For four weeks it will just be him and the “wicky,” Thomas Wake (Willem Dafoe), an odd man who has spent much time alone and is set in his ways, prone to rituals, and more than occasionally irascible for no discernible reason. Winslow is busy tending to the daily chores of upkeep around their craggy islet — cleaning their quarters, feeding coal, cleaning the cistern, painting the outside of the lighthouse, and so on. Wake forbids Winslow from entering into lighthouse chamber at the top, for reasons he never expands upon. As time wears on, Winslow is haunted by his past, constantly sees images of impossible creatures from the sea, and a slow break from reality begins to infect these two close-quartered inhabitants of the lighthouse. 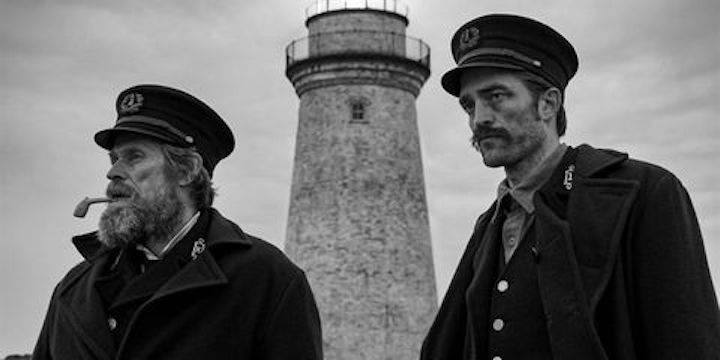 Boiled down to its simplest elements, THE LIGHTHOUSE is a mash-up of the cold existentialism of Samuel Beckett’s Waiting For Godot, the drunken savagery of Ted Kotcheff’s 1971 film WAKE IN FRIGHT, and a large scoop of Jungian archetypal imagery pertaining to recurring myths. Through visuals or direct dialogue invocation, Eggers brings in legendary figures like Proteus (from The Odyssey), Prometheus, chthonic gods, Icarus, Osiris, along with Christian concepts of levels of Hell and punishment of purgatory. It’s… a lot. The good news is that the film looks gorgeous, shot in black and white and in a 1.19:1 aspect ratio, which gives it a feeling of a frames taken from a daguerrotype camera from around the time period. There are beautifully composed shots, with poetic framing and powerful visuals that will stay with viewers longer than most else in the film. Furthermore, Dafoe and Pattinson (as it’s basically just them on screen for 99% of the film) deliver extraordinary performances — Dafoe in particular seems to literally channel the ocean itself in his ebbing and flowing of calm and rage, and lends an ancient mariner feel to everything he does. As Wake, Dafoe is hilarious and frightening and pitiable and just plain weird, delivering long soliloquies while also using the 19th century slang as if it were the most natural way of speaking. Pattinson holds his own against this force, but — due to the nature of his character — isn’t allowed to have as much range or fun with it. 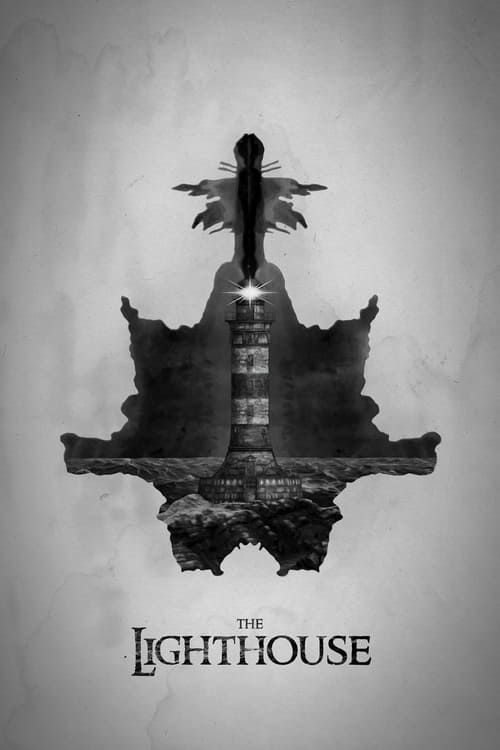 THE WITCH was steeped in allegory and imagery, conjuring up references throughout American history, various religions and folklore, and also more than a little bit of Freudian imagery. Why, then, does that film succeed where THE LIGHTHOUSE buckles? THE WITCH‘s metaphorical elements are tucked into its narrative — it has an intriguing plot that may not be utterly novel, but is still an unfolding mystery that is basically easy to follow from Point A to Point B. The basic narrative of THE LIGHTHOUSE is increasingly drowned out by its subtext (which just becomes text) as the film continues and it flounders into a dream logic world dealing with mythological archetypes more than actual characters or events. One of the dangers of a story that deals with loss of time and unraveling of worlds and seemingly hellish experiences is, if not done correctly, the audience is experiencing that languid repetition and constant exposure to madness which makes the movie feel much longer and more punishing than most viewers would allow.

Still, Robert Eggers is an incredibly talented filmmaker. Writing with Max Eggers, the dialogue remains cracking and engaging even through the layers of centuries’ old seadog slang. There are so many carefully constructed moments, exchanges, shots, details, which is all very impressive to see someone tackle so well in only his second film. But it also makes certain choices baffling — Pattinson goes through multiple types of accents in the film (from basic 19th century working class Irish immigrant, to more refined Irish worker [think Kennedy], to a bit of a British twang, and New Englander patois, and more). At first, with the switch, it speaks to some sort of duality of identity. But as these changes keep happening — knowing that Robert Eggers is a fastidious director in terms of accent and language, and Pattinson is a gifted actor capable of maintaining accents and characters — the sheer number of different types of voices must speak to something, right? Perhaps the plurality of man? Or Winslow is the everyman so has all of their voices? But it ends up feeling like an odd choice that only muddies the waters and adds on to the pile of “isn’t this weird?!?” which is rarely interesting.

Robert Eggers’ move from acclaimed independent debut into seemingly odd (but with its own merits) sophomore feature is reminiscent of the trajectory of Steven Soderbergh. SEX, LIES, AND VIDEOTAPE was a massive success in 1989. Soderbergh’s feature length debut, it crossed over from indie buzz into mainstream movie and helped usher in the era of Sundance and indie films to have wider appeal in the ’90s for artists like Spike Lee, Rose Troche, Kevin Smith, Quentin Tarantino, and Gus Van Sant, amongst others. Soderbergh followed up his intimate film about infidelities, insecurities, love, and neuroses with KAFKA in 1991. Utilizing recurring themes, signature set pieces, and plot elements from the titular writer’s work, Soderbergh and screenwriter Lem Dobbs created a labyrinthine film about control and reality on a citywide scale. It was a massive departure from Soderbergh’s debut (though there were themes carried over), and many didn’t like KAFKA at all, which led to Soderbergh being in the wilderness for a bit while continuing to experiment and find what interested him in filmmaking. It’s possible that when people are reading this review that KAFKA has been reclaimed by film critics and fans who have the luxury of placing it within Soderbergh’s filmography. The same will most likely happen with THE LIGHTHOUSE — it will not go over well with general audiences (who already bucked at THE WITCH‘s critical acclaim), and seems an odd extension of what came before, but still maintains a lot of artistic talent that is admirable. THE LIGHTHOUSE may get lost in its own myths, but it still underscores Robert Eggers as a phenomenal talent who will continue to surprise and grow with each work he creates. Hopefully that also means Eggers will make a stripper movie in about 25 years as well (and if it’s another period piece, then it’s an automatic Four Stars from me).