It says something either about Blumhouse’s prolific output or our submission to reboot culture that it’s hard to bat an eye at the thought of a FANTASY ISLAND redux at first blush. Why wouldn’t Hollywood dredge up a title that still retains the faintest sense of cultural cache? If nothing else, the original television series lives on as a pop culture relic distilled down to the image of Hervé Villechaize’s Tattoo excitedly welcoming weekly visitors to the titular island. It’s only when you really think about it that you start to presume Blumhouse made the odd choice to bank on hazy memories of Tattoo yelling “the plane, the plane!” as the studio repackaged this 40-year-old TV show for its latest teen horror movie. Now you start to sense the problem here.

Those concerns aside, it’s not much of a stretch to imagine FANTASY ISLAND as a horror movie. The old show may have had an air of silliness, but most of its episodes were essentially supernatural morality plays that twisted characters’ wildest fantasies into absolute nightmares.

Imagine “The Monkey’s Paw” with a dollop of Amicus anthologies by way of ’70s/’80s network TV. All director Jeff Wadlow and company (working from a script by Wadlow, Jillian Jacobs, and Christopher Roach—the same writing/directing combo behind BLUMHOUSE’S TRUTH OR DARE, also starring Lucy Hale) have done here is take the premise and spruced it up in slick Blumhouse digs to give it the impression of respectability. Even this big-budget decorum doesn’t do much to outrun the silliness, though, and you have to hand it to everyone involved for not making this some grim, gritty take. This FANTASY ISLAND is also goofy as hell, which is arguably the only thing it has going for it. 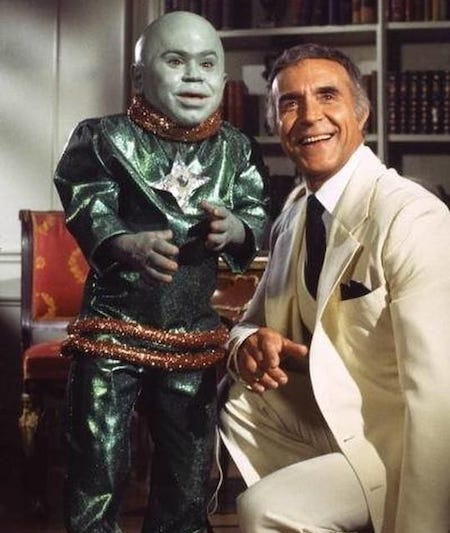 In this version, it’s Michael Peña starring as Mr. Roarke, the enigmatic overlord of a mysterious island that grants visitors the chance to live out their fantasies. There’s no Tattoo, though; instead, an assistant named Julia (Parisa Fritz-Henley) eagerly watches as the latest plane comes ashore bearing a quintet of new clients, whose desires range from petty to existential to completely harmless. Melanie (Lucy Hale) wants to exact vengeance on an old school bully; Gwen and Patrick (Maggie Q and Austin Stowell) want to rewrite their tragic histories; brothers Brax and J.D. (Jimmy Yang and Ryan Hansen) just want to have a perpetual poolside party.

All of them assume there’s some kind of catch—maybe FANTASY ISLAND’s an immersive experience, or maybe it uses virtual reality. Hell, maybe it’s holograms, like the one that brought Tupac back from the dead. Or maybe there’s a mysterious force lurking on the island that actually makes these fantasies come true before turning them very sour.

I spent much of the first hour of FANTASY ISLAND wondering why this wasn’t just a TV revival. Wadlow basically recreates the sensation of channel surfing through four different episodes, each of which have wildly varying tones. Melanie’s vendetta against the bully—who miraculously appears before her, bound and captured—feels like residue from the mid-aughts run of torture-based horror. Gwen’s attempt to turn back time feels like a fantasy-tinged romantic drama; likewise, Patrick’s trek back in time to reconnect with his dead father feels like something out of a sci-fi mind-bender.

Brax and JD’s debauchery feels like a teen comedy that goes stupidly awry when a paramilitary group descends upon their mansion. One minute, you’re watching a girl destroy her bully’s marriage by posting a damning video to her Facebook page; the next minute, you’re watching a woman reckon with the life she never had, complete with a husband and daughter. And then you’ve got a bunch of masked psychos (led by Kim Coates!) terrorizing a couple of bros and their bikini-clad buds in a panic room. FANTASY ISLAND is a damn hoot at times. 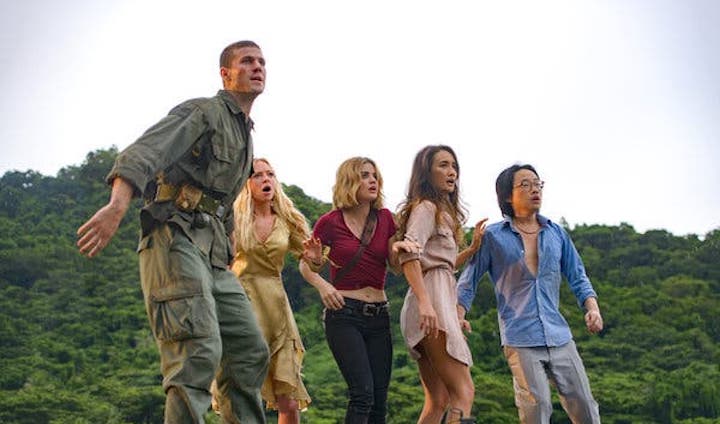 Probably not enough of the time, though. The word “abrasive” comes to mind for much of the early-going, when it ping-pongs between all of this with reckless abandon. Despite so much happening at once, narrative thrust is almost non-existent, and it comes as an abrupt (but welcome) surprise once a cohesive story does begin to emerge and connect these five visitors in a more meaningful fashion. Maybe FANTASY ISLAND doesn’t suddenly become wildly compelling once this happens, but it’s a relief when you realize that this thing is actually headed somewhere after so much wheel-spinning.

And make no mistake, whatever intrigue exists is purely of the train-wreck variety since it’s charitable to even consider these people “characters.” Each of them has been plucked wholesale out of a scrapbook of clichés and spend most of the movie spitting out dialogue that straddles the border between inane and totally alien. Save for Peña—who kind of broods through this thing with a vaguely sinister intent—everyone is at least lively enough to provide some much-needed energy, especially when the film is a collection of barely-connected episodes. However, even the characters who practically beg for audience sympathy never quite earn it once it becomes clear that Wadlow is mostly interested in just mining this premise for tame horror outbursts, silly narrative twists, and detached ironic one-liners. 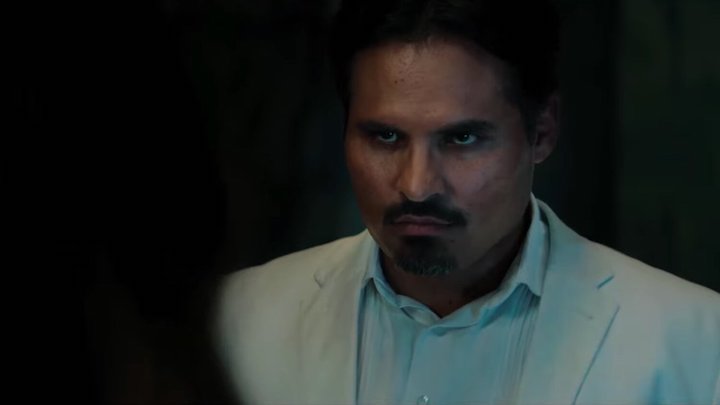 But, again, this isn’t the worst approach: FANTASY ISLAND is nothing if not boisterous once it ramps up, and it rides its jagged, jittery pacing and tonal whiplash through some entertaining story beats. You can never dismiss a movie where a wild Michael Rooker appears to do battle with a wraith-like ghoul that has its mouth sewn shut.

I’m going to leave the particulars to your imagination, but just know the backend of FANTASY ISLAND is stuffed with nonsense: rescue helicopters, ghostly doppelgängers, horrific accents, rocket launchers, grenades, magic rocks, zombie dads, maudlin sentimentality, the existential despair of eternal recurrence as a character grapples with the island’s purgatorial nature. All of this is fun due to sheer force of will: FANTASY ISLAND flings so much stuff on the screen that you want to ride along with it just to see what it’ll conjure up next.

I do wish all of this landed with the sort of bite it deserves, though. Something about FANTASY ISLAND does feel just a little too slick and sanitized. Between the PG-13 rating that kneecaps its gore and some dodgy effects work, it never quite becomes a showcase for even some memorable horror outbursts. Give it an R-rating or a stronger commitment to its Grand Guignol potential, and it might be easy to recommend; without either, there’s only the sinking feeling that FANTASY ISLAND is a lot of outrageous narrative bluster with very little visceral payoff. The various ghouls, apparitions, and explosions that populate its climax should inspire more than a handful of bemused chuckles that inherently come when something careens right off the rails.

While watching it, I couldn’t decide if FANTASY ISLAND was half-baked or completely overcooked. I’m still not sure I have the answer for that. I do know that it barely strays on the right side of being the kind of bad movie that never bores, at least. This comparison might not do it many favors in most circles, but between the janky pacing, the prominent subplot about bullying, the barely human characters, and the climactic exposition dumps, FANTASY ISLAND has some recognizable MY SOUL TO TAKE energy. It could probably use some more of it.

Where Wes Craven’s film feels like an inexplicable, idiosyncratic effort, this one just seems like the byproduct of a studio afraid of taking too big of a risk and allowing the filmmakers to go for broke. Far be it from me, an average moviegoer 3,000 miles away from Hollywood, to presume to know better, but you can’t help but parse the logic involved in resurrecting a 40-year-old TV show and catering it to a generation that mostly doesn’t even know FANTASY ISLAND in the first place. That kind of hubris should be swinging for the fences instead of safely bunting like this movie does.

Arguably its most confounding moment comes just before the credits, when it makes a direct wink and nod in the direction of those familiar with the actual show, who are at least a couple decades removed from the target demographic. It’s so ridiculous that I’m choosing to believe it’s actually a sly joke at the expense of Hollywood’s rampant prequel/reboot culture. This is my fantasy, and you can’t take it away from me. 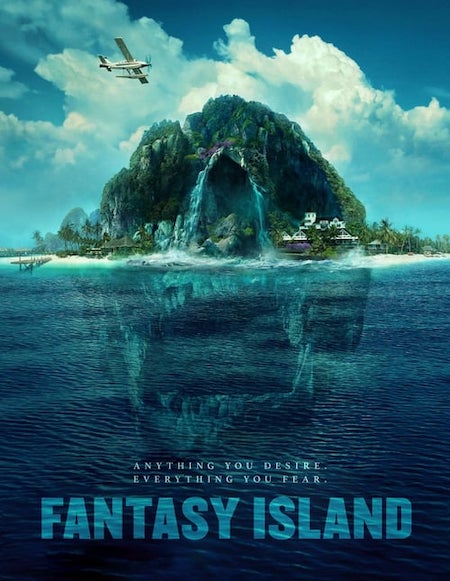