I’ve seen more absurd, outrageous movies than FEAR NO EVIL, but few of them have made me mutter an amused “What the hell?” to myself as many times as I did while watching this odd little flick. For whatever reason that I cannot quite put my finger on, there is something far stranger and more disconcerting about a movie that is just slightly off in every scene than one that widely misses the mark. And with FEAR NO EVIL there literally is something in every scene—whether it’s a plot twist, character choice, makeup effect, or just plain old tone—that strikes a discordant note, zigging when your brain tells you the film should zag.

It is clear that writer/producer/director Frank LaLoggia is simply trying to do a low-budget ripoff of THE OMEN franchise, but his script veers heavily into Catholic-sploitation, incorporating far more religious elements than simply trying to stop the Antichrist (in this case, small town teenager Andrew, played by Stefan Arngrim). LaLoggia has Archangels running around Earth in human bodies, a dismissive priest more concerned with putting on a Passion Play for Easter (that goes hysterically wrong) than dealing with the clear threat right in front of him, and a locker room shower bullying scene where the homoerotic subtext quickly becomes—well, the text. All of that is before I even get into the sudden third act swerve into what is apparently an attempt to equate androgynous glam rock style with Satanism as Andrew—dressed and made up to look like a flamboyant extra from THE ROCKY HORROR PICTURE SHOW–directs a mass of zombies to do his bidding. Yep, it’s that kind of movie. 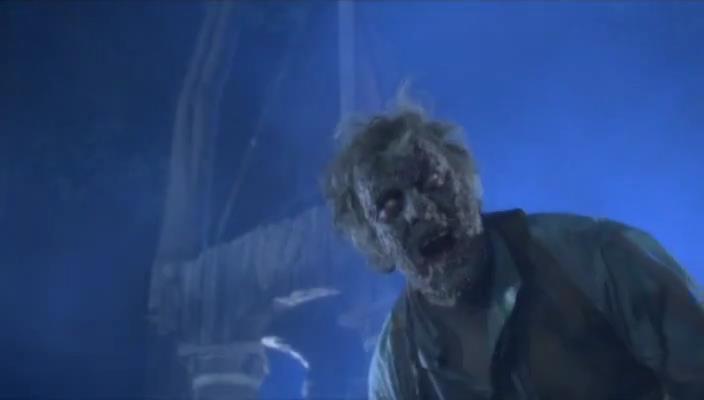 If I haven’t made myself clear yet, “that kind of movie” is one worth watching. LaLoggia provides some great, over-the-top set-pieces that go nicely bonkers, with highlights including the aforementioned Passion Play, what happens when you try to Baptize the Antichrist, and a game of gym class dodgeball taken to its logical horror movie extreme.

But even in the smaller moments, there are strange scenes that can best be described as “odd texture.” The effect that Andrew’s evil nature has on his long-suffering parents (Barry Cooper, Alice Sachs) is almost a claustrophobic short film unto itself (one that goes to a darker place than the rest of this silly movie). A subplot about the torturous indignities one of the Archangels (John Holland) goes through while in human form and the search by the second Angel (Elizabeth Hoffman) for the missing third Angel is repetitive and melodramatic, making it the cinematic version of the nonsensical Christian horror novels that religious relatives used to foist upon my when I was a teenager. And why does the abusive relationship between the school bully and his girlfriend get so much screen time? Is it to show them as horrible people who are going to get what’s coming to them? If so, is LaLoggia positing the Antichrist as an antihero? 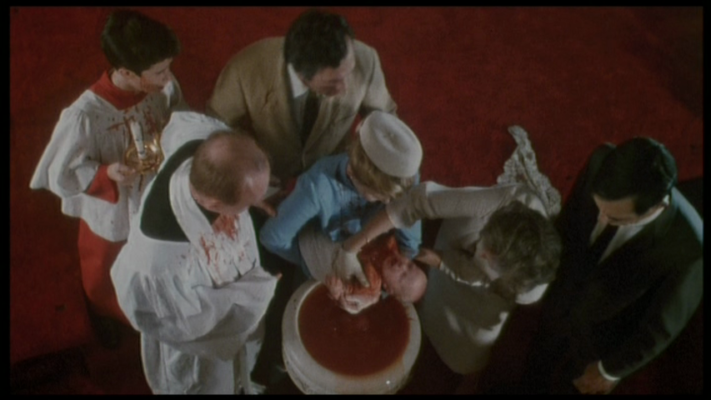 That sort of wrinkle is what makes FEAR NO EVIL so bizarre at times—and also what makes it really worth watching. For much of the film it seems that LaLoggia and Arngrim are trying to humanize Andrew by presenting him as the reluctant Antichrist. He feels bad after tragedies that he causes, goes to funerals, lights his catatonic mother’s cigarette, and reacts with embarrassment and sadness when the school counselor pays him numerous compliments that so many Ivy League schools have offered him admission. At a certain point in the second act, Andrew is one of the more sympathetic characters in the movie, but LaLoggia’s screenplay does not use that sympathy in the third act as he follows through on the traditional Biblical arc of what the Antichrist is destined to do.

So is the point of FEAR NO EVIL that no matter how bad people can get or how out of touch religious institutions (in this case, specifically the Catholic Church) become with their congregations, the Antichrist is always going to be worse than them, so they should be forgiven? I suppose that’s a very Christian way of looking at things, but LaLoggia’s film has a streak of disillusioned Catholic anger to it that is hard to square with the ultimately traditional Biblical way the third act of the film plays out. 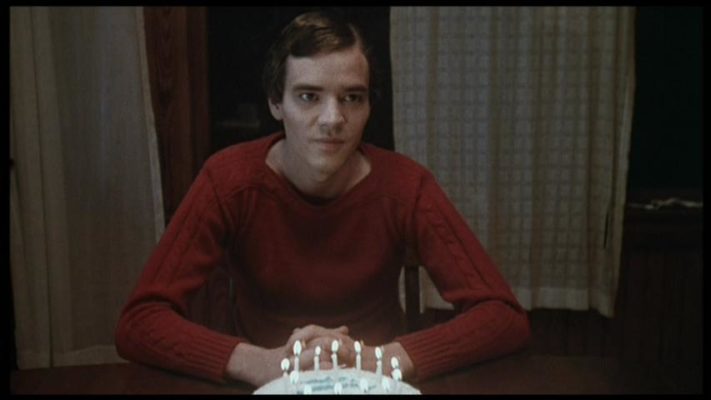 Or maybe I’m looking too hard for an underlying motivation in the film. Maybe LaLoggia really was just trying to do a smaller, sleazier version of THE OMEN? If that is the case, he more or less succeeded. Arngrim makes a compelling and enigmatic lead, the location shooting is appropriately bleak for upstate New York in late Winter/early Spring, and there are a couple of effective gore sequences that are more intense than you would expect. Interestingly, with as low of a budget as the film obviously had to work with, it feels like cheaper makeup effect gags were chosen for some scenes in favor of paying out quite a bit for a soundtrack that includes Talking Heads, Sex Pistols, Ramones, Patti Smith, The Boomtown Rats, Richard Hell, and The B-52’s. Needless to say, even in 1981, that’s a killer line-up for an indie horror flick with a budget of less than a million bucks.

Of course, the wall-to-wall collection of new wave and post-punk favorites could also just be another way of LaLoggia doing everything he can to make FEAR NO EVIL a pure piece of entertainment. The same goes for the inclusion of a zombie sequence, and the Passion Play, and any other small number of odd tangents the movie takes. There is an eagerness to please at work here that elevates the film from a potentially atonal mess to ambitious and straight-up weird. I admire that in a horror flick. 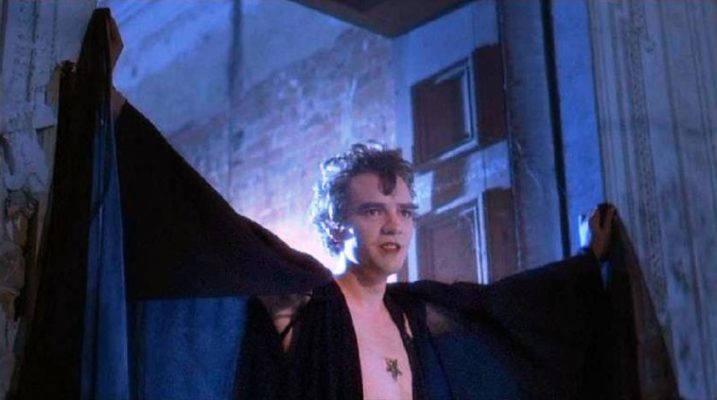 While not loaded with extras, this Blu-ray from Scream Factory looks quite good, despite so much of the film taking place at night or in very dark locations. Even though the supplemental materials are not that numerous, they are quite good. The first featurette is an interview with John Eggett, the film’s “special visual effects” artist (though it quickly becomes clear that his duties extended far beyond that job description). His chat is overall funny and light, but he does offer up the disgusting detail how actual road kill animals were used for an early scene of a Satanic millionaire’s lair. An in-depth interview with Arngrim details his career from child actor to would-be rock star to working character actor. Between the featurette and his commentary track with Justin Beahm, the low-budget, sometimes chaotic, occasionally inspired production of FEAR NO EVIL is broken down in fascinating, often entertaining detail.

FEAR NO EVIL is not a lost classic, but it is a fascinatingly strange indie horror flick made at a time that indie horror producers were not taking a lot of chances. From Arngrim’s recollections, that it was completed at all sounds like a victory, that it turned out to be such an odd, memorable flick might actually be a miracle. 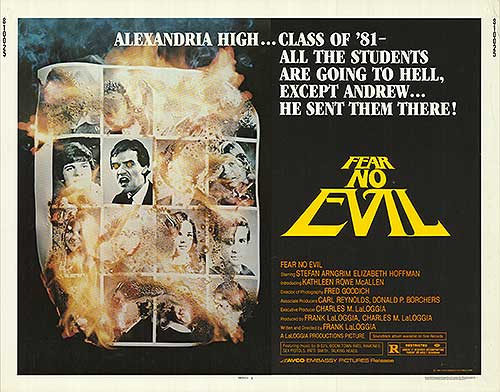 FEAR NO EVIL is now available on Blu-Ray from Scream Factory.