Okay, let’s keep our best-of-2017 theme going here with a look at the Top 10 ongoing series of the year. A quick refresher on the rules: both ongoing and limited series are eligible in this category, as long as they meet a three-issue minimum. The idea here is to rank comics that are chained to a regular(-ish) production schedule, as opposed to those that come out whenever a cartoonist or creative team has the time and/or finances (in the case of self-publishers) to release them. Those books were all eligible (and, frankly, dominated) the “Top 10 Single Issues” list that I cranked out a couple days ago — and, as with that, this one won’t feature full reviews of each series, nor even ones that graduate to the “capsule” review level, just short summations of why I like ’em.

Sound good? I’m happy if you agree, and frankly could care less if you don’t. And so, with my “arrogant asshole” credentials out of the way, let’s get into it: 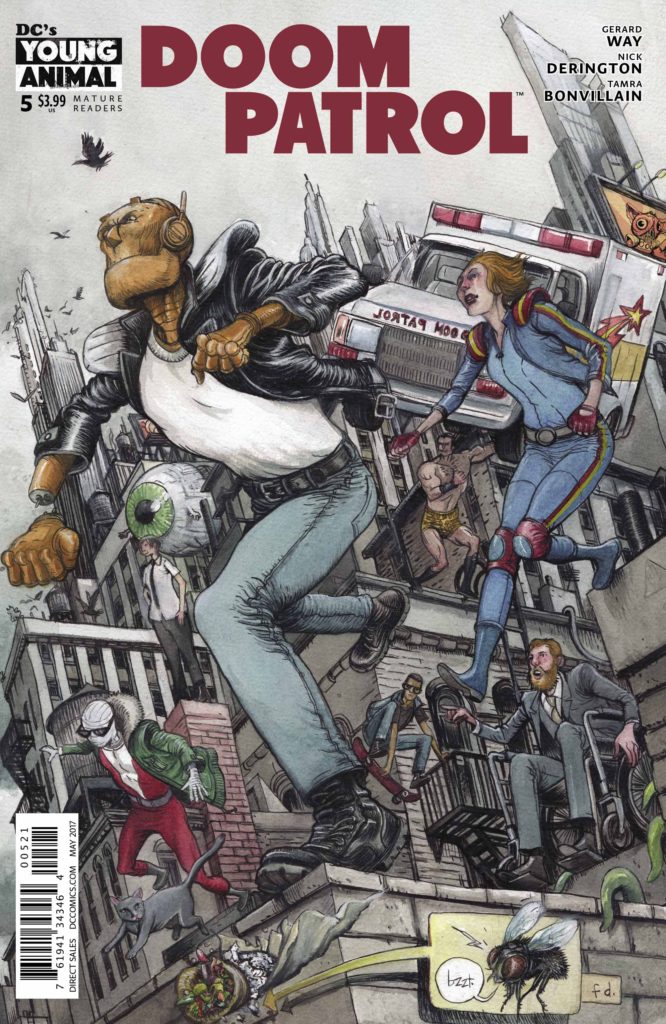 10. Doom Patrol (DC/Young Animal): This book has seen numerous production delays, but whenever a new issue comes out, it’s worth it. Yeah, writer Gerard Way leans pretty heavily on Grant Morrison’s DP run for influence, but he’s not slavishly beholden to it, and Nick Derington’s art is equal parts classic and forward-thinking. The closest thing to an “art comic” you’re likely to get from either of the “Big Two” publishers. 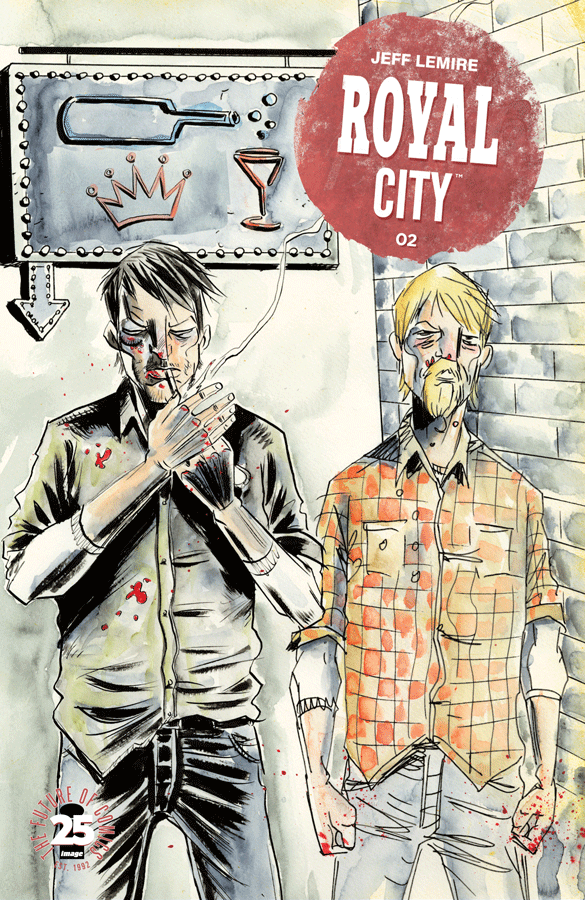 9. Royal City (Image): Jeff Lemire’s moody and slow-burning solo book is a little bit examination of a town that has seen better days, but mainly a compelling family drama about a dysfunctional clan that has definitely seen better days. A touch too mired in ’90s nostalgia for my tastes (news flash, that decade sucked — yes, even most of the music), but damn near pitch-perfect apart from that. 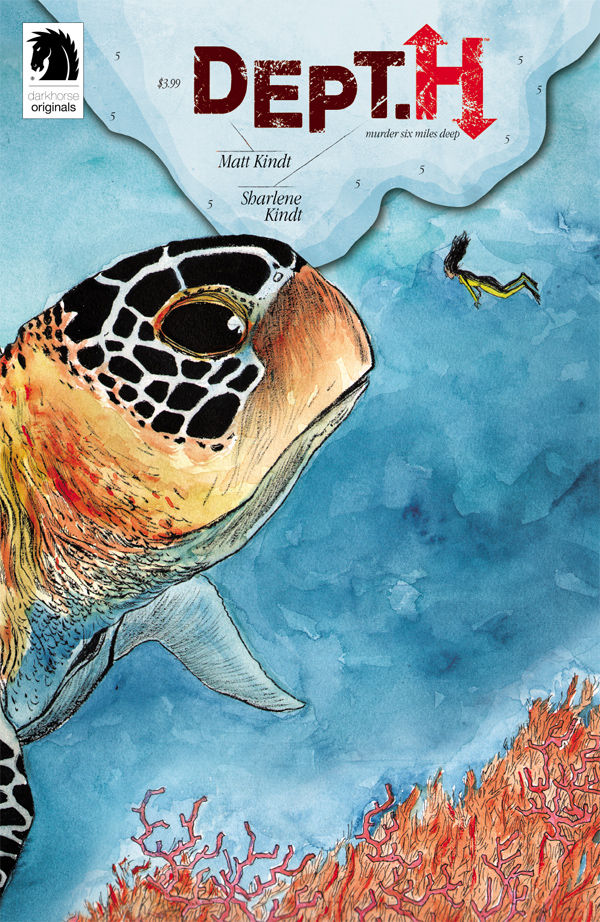 8. Dept. H (Dark Horse): Matt Kindt’s underwater murder mystery is probably the most compulsively page-turning series going right now, and the watercolor-style hues provided by his wife Sharlene complement the atmosphere perfectly. I dunno how a book with a whole ocean to play in ends up being having such a claustrophobic feel, but damn if the walls don’t seem like they’re closing in on every member of the ensemble cast, all the time. 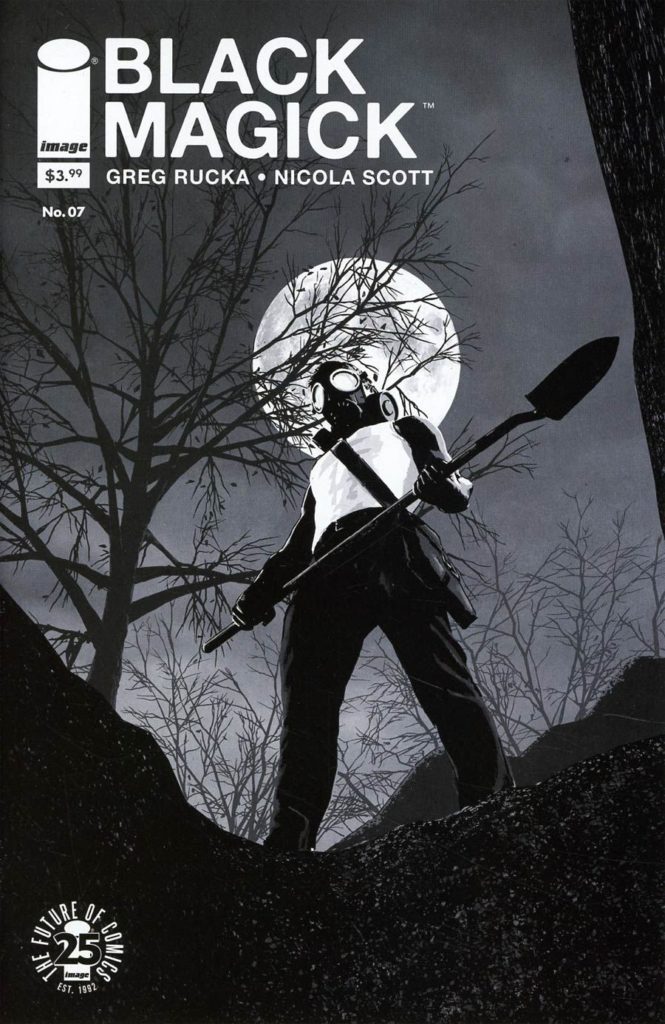 7. Black Magick (Image): Writer Greg Rucka and artist extraordinaire Nicola Scott took a break from this one to work on Wonder Woman for awhile, but now they’re not only back, but back with a vengeance. Part police procedural, part Wiccan educational text (for the uninitiated, at any rate), this comic is like nothing else out there, and the rich, cinematic art will absolutely knock your socks off. 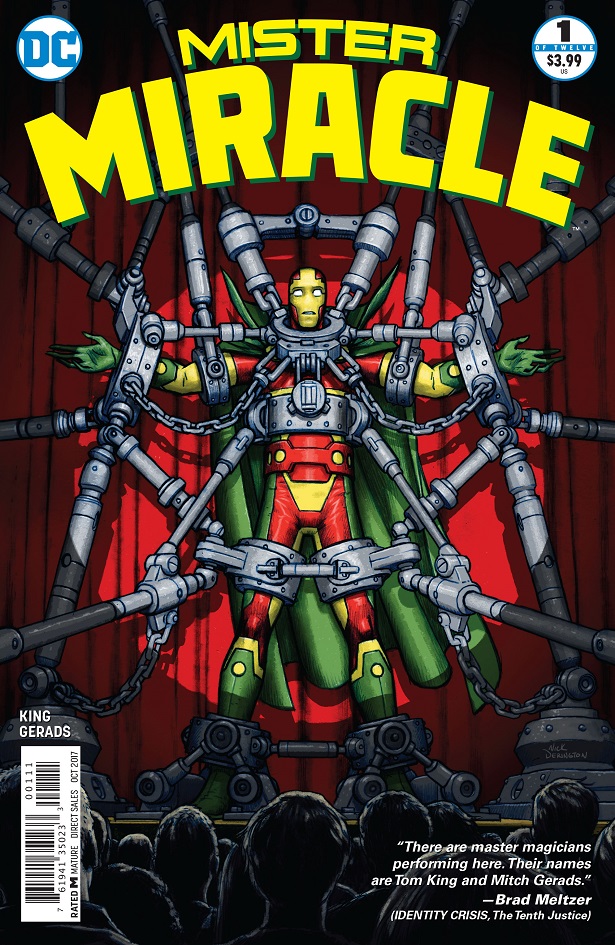 6. Mister Miracle (DC): Yeah, this thing has been over-hyped to the hilt, and won’t seem anywhere near as “revolutionary” as advertised to anyone who’s seen a few David Lynch flicks (particularly MULHOLLAND DR.), but Tom King and Mitch Gerads nevertheless deliver a smarter, more confounding, more complex, and more conceptually spot-on take on a Jack Kirby concept than we’ve seen to date — heck, I daresay The King himself would probably be proud of this one. 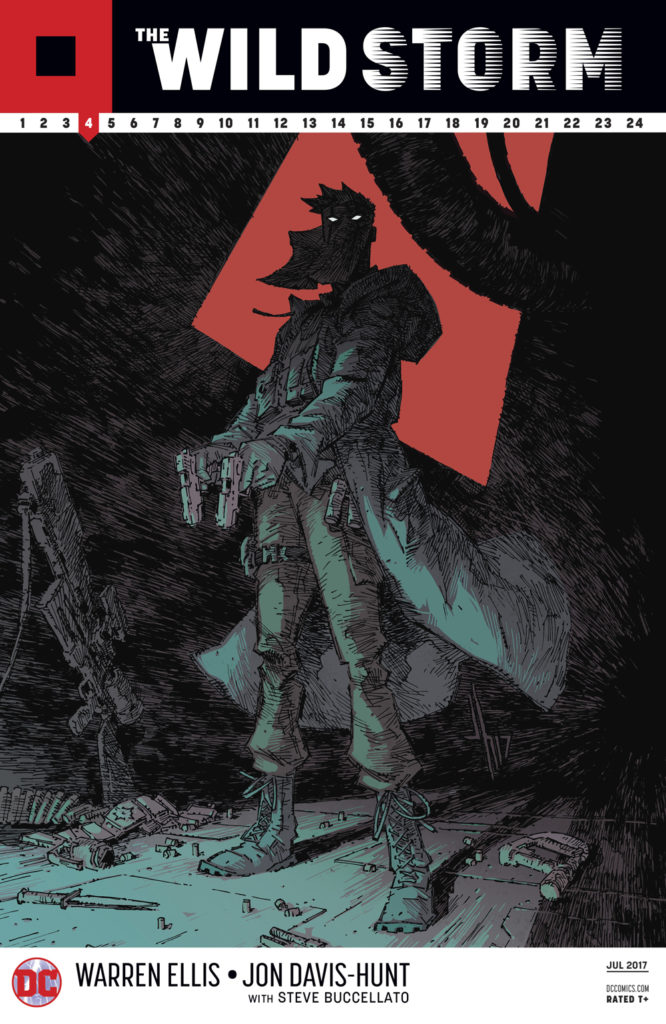 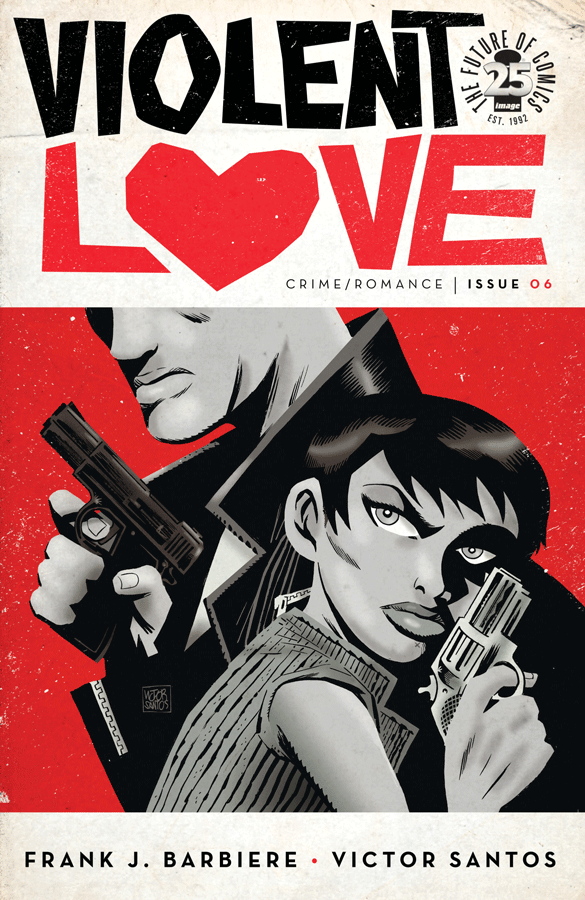 4. Violent Love (Image): Nobody bought this just-wrapped series and even fewer people are talking about it, but fuck it, that’s their loss. Frank J. Barbiere’s BADLANDS/ NATURAL BORN KILLERS/ BONNIE AND CLYDE -style “criminals on the road” script is as fast and furious as they come, and Victor Santos’ art is the most stylish thing going in any “major independent” book, brimming over with ’70s exploitation grit and film noir cool. 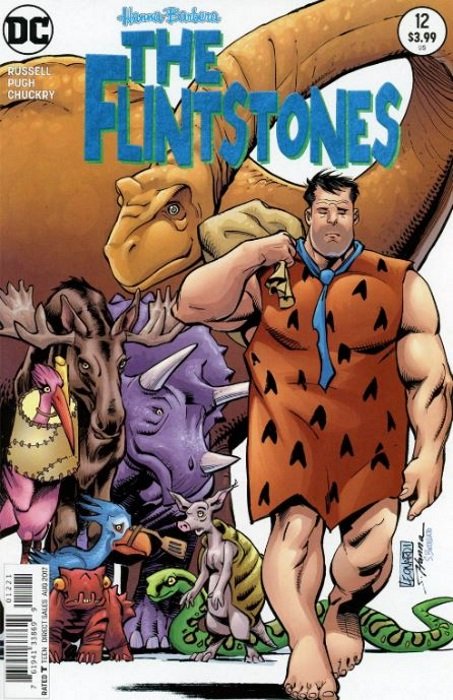 3. The Flintstones (DC): Truth be told, all of DC’s licensed Hanna-Barbera comics have been far better than any rational reader had probably assumed they would be, but this recently-concluded revisionist take on life in Bedrock from writer Mark Russell and criminally-underappreciated veteran artist Steve Pugh is clearly the best of the bunch — and, obviously, one of the best comics of the year. Spot-on social and political commentary that spares no sacred cows matched with wit and whimsy that’s downright charming, this wasn’t so much a Fred, Wilma, Barney, and Betty “re-launch” as it was a thematic and spiritual successor to Howie Post’s legendary Anthro. Utterly sublime, and hopefully a second “season” will be in the offing sooner rather than later. 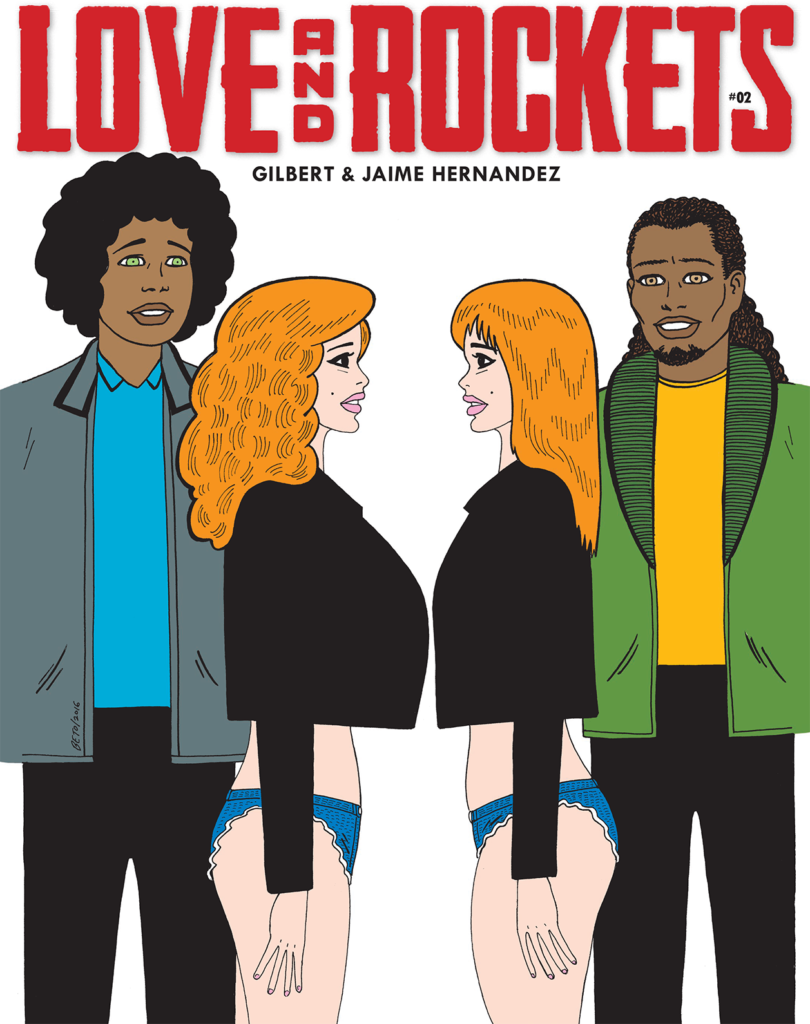 2. Love And Rockets (Fantagraphics): Los Bros. Hernandez have brought their series back to its original magazine format, and whenever a new issue hits the racks, all is temporarily right with the world again. Beto’s stuff is arguably at its most deeply self-referential right now, but rest assured it’s still great, and Jaime’s strips are aging so gracefully it’s almost painful to take in — seriously, Maggie, Hopey and co. are even more compelling at mid-life than they were in their twenties. By all rights this comic should have devolved into nostalgia and stagnation by now, but not only has that not happened, there are no signs that it ever will. Who are we kidding? This is one of the greatest comics not only of the year, but of all time. Always has been, always will be. 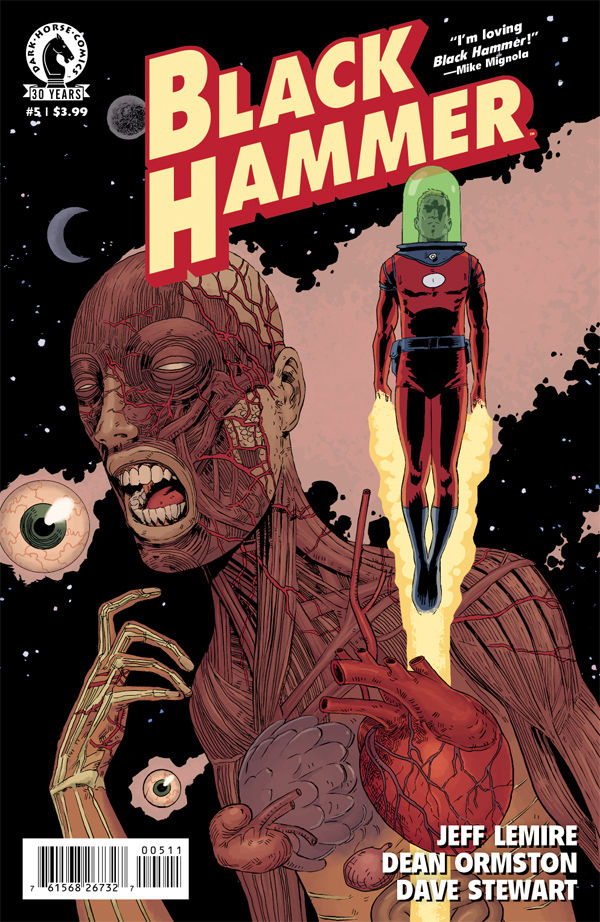 1. Black Hammer (Dark Horse): Just when you thought super-hero revisionism was finally dead and buried, along comes Jeff Lemire and a majestically resurgent Dean Ormston (who had to re-train himself to draw after suffering a stroke) to show that you can move the most tired sub-genre of the most tired genre in the medium forward while writing a love letter to its past at the same time. This book consistently hits every note that long-time comics readers could possibly ask for, and somehow does so without a hint of either cynicism or irony. Capes and tights haven’t been done this sincerely since Alan Moore’s run on Supreme, and who knows? By the time all is said and done, this just might — I say again, might — prove to be almost as good. 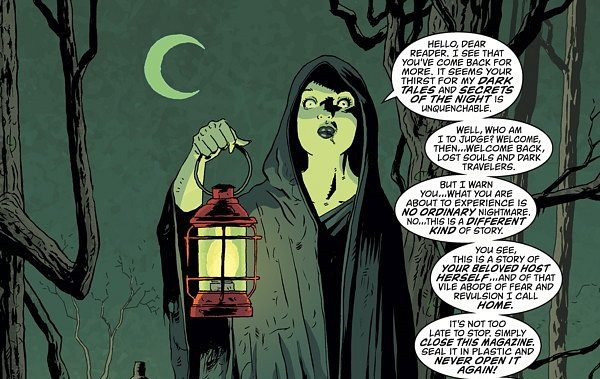 Like my list? Hate it? Somewhere in between? Let me know! Certainly I had to leave a few solid contenders off, but as with the single issues, I’m really comfortable with my rankings — in fact, I had no hesitation about any of them, nor where they should fall. It all came almost disturbingly easy. Which, in theory, means I’m probably missing something really obvious — but I don’t think so.

Up next: The Top 10 Collected Editions (Contemporary) list, which will rank the best books presenting material from the beginning of the so-called “Modern Age” right up to the present day. TPB collections, comic strip collections, anthologies, webcomics collections, and the like are all eligible in this category, as long as their contents appeared somewhere else, either physically or digitally, first. I’ll hope to see you back here in a handful of days for that one!