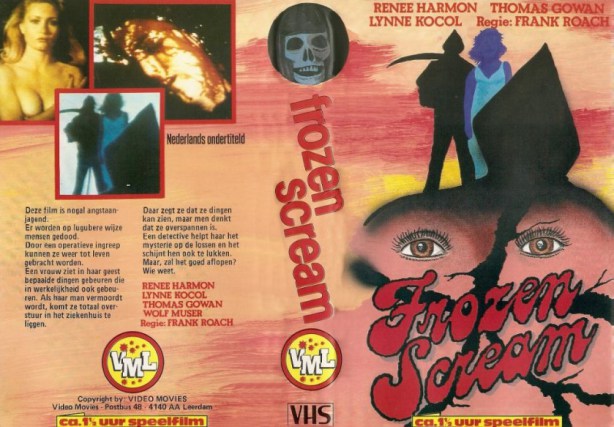 What happens when the largely unintelligible Renee Harmon — best known for her collaborations with B-movie auteur James Bryan such as LADY STREET FIGHTER and THE EXECUTIONER PART II — tries to fly solo? Nothing good, I assure you, as 1975’s rankly amateur production FROZEN SCREAM proves beyond a shadow of a doubt. This is a flick that not only has no time for dull banalities such as logic, continuity, believability, or even generally-accepted consensus reality — but also, by all accounts, has no real comprehension of what they even mean.

Which, I guess, is fine. Because I’ve always been of the opinion that the best way to get away with ignoring something is to feign ignorance of its very existence. “What? Taxes? Never heard of ’em, and nobody ever told me I had to pay ’em, that’s for sure!” has always been a line I’ve wanted to try, for instance.

It’s quite clear that nobody ever told Renee Harmon that she couldn’t act, but that didn’t stop her from trying. Hell, she and her principal co-star here were both LA-area community college acting instructors at the time (and most of the “talent” they assembled for this cheapie came from their classrooms). She also couldn’t write a coherent screenplay and couldn’t produce anything like a remotely competent motion picture — but again, she didn’t let these pesky facts stand in her way, and she didn’t need to be able to do any of those things, either, apparently, because FROZEN SCREAM exists regardless of those absolute truths.

All of which means that in her own private war against the words “can’t” and “shouldn’t,” she won. We all seek to impose our will on the rest of the world to one degree or another — she actually managed to do so, after a fashion. Can you say the same? 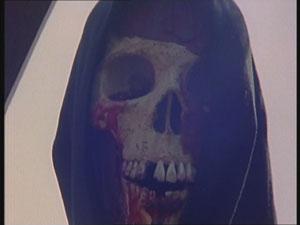 I have to reiterate, though — none of that means that this is a good movie. Or even a good bad movie. Or a “so bad it’s good” movie. It really is shit. The “plot” — a term we have to use very loosely here — centers on evil scientist Sven Johnsson (Lee James), and his trusty lab-coated sidekick, Lil Stanhope (Harmon herself), and their attempts at achieving immortality. They run some kind of new-agey college course together which gives them ample access to “volunteers” for their experimentation, and wouldn’t ya know, they do find the fountain of youth — in the form of walking death. Yes, friends: you, too, can live forever — you just have to die first to do it, and then come back as a mindless, shambling, zombie corpse! I did warn you about the massive gaps of logic in this film’s story, did I not?

Anyway, when one of their guinea pigs, a certain newlywed university student named Tom Girard (Wolf Muser) disappears, his nosy bride, Anne (Lynn Kocol) starts asking a few too many questions and getting a little too close to the truth and — ah, shit, none of this matters. Really. Because there’s nothing like a linear structure going on here, anyway.

Honestly, filmmakers who love to fuck with your head by tangling up timelines (think Gaspar Noe, for instance) could learn a thing or two from Harmon and her nominal director on this project, one Frank Roach, because they achieve by dint of sheer bloody-minded incompetence the kind of reality-bending that others have to work really hard for. The results are far from pretty, but consider this — the constant voice-over narration in FROZEN SCREAM, which is evidently meant to explain so much of what the characters on screen never seem to get around to, actually has the opposite effect and only makes things more confusing! That takes a profound level of commitment to the art of incomprehensibility that simply can’t be faked— or planned. Any flick this haphazard and reckless can only be the result of pure, unadulterated accident, matched with a willful disregard to both what you’re doing and what anyone else will think of it.

And hey — giving a fuck is such a bourgeois thing to do, anyway. 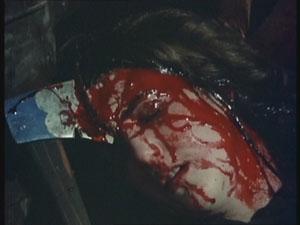 Harmon, to her credit (again, a term we use loosely) knew the worst-kept secret to holding audience’s interest, anyway — as long as there’s a minor amount of nudity and gore sprinkled about here and there (keep in mind, it doesn’t even have to be very tantalizing nudity or very realistic gore), it literally doesn’t matter what the fuck you put on the screen the rest of the time. People will just keep watching, hoping for more. We’re predictable like that.

And honestly, that comes as near as anything can to explaining both what’s going on here and why. Try this — when you watch FROZEN SCREAM, and the numerous questions along the lines of “dear God, what the hell were they thinking here?” come up in your mind (as, I assure you, they will), just answer every single one with “ah, who really cares, anyway?” Trust me, it works.

At this point I’ve probably wasted enough of your time trying to codify and classify what can only be described as truly and utterly inexplicable, anyway. This is a movie that defies analysis or understanding as surely as it eschews quaint, shop-worn notions of good and bad. It just is and that’s all the more that can really be said about it — apart from the fact that you should skip the various bootleg DVDs of it that are out there and just watch it for free at the YouTube link below, because while a viewing experience this singular really should be experienced first-hand, it just as certainly should not cost you one red cent of your hard-earned money.