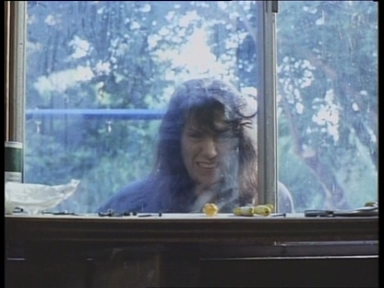 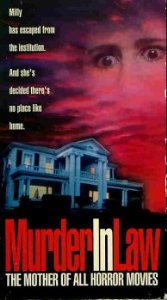 The psychotic mother figure has a long and sordid history in grand horror dame films, from the unseen Mrs. Bates of PSYCHO to the camp stylings of WHAT’S THE MATTER WITH HELEN’s Shelley Winters to the modern age of horror television, featuring the likes of “American Horror Story: Coven”’s Jessica Lange and “Bates Motel”’s Vera Famiga, the latter a very much seen (and very much disturbed) Mrs. Bates. The late ‘80s and early ‘90s had a quiet boom of psychotic film mothers – Troma gave us FLESH EATING MOTHERS, Diane Ladd went psycho in Frank LaLoggia’s MOTHER, Georgina Spelvin slashed away in Chuck Vincent’s BAD BLOOD, Max Allan Collins got the original BAD SEED, Patty McCormick, to be a dangerous MOMMY, V.C. Andrews hit the screen in FLOWERS IN THE ATTIC, and Jamie Lee Curtis tried to reclaim her kin in MOTHER’S BOYS.

Not to mention MOM, ED AND HIS DEAD MOTHER, BRAINDEAD, GRANDMA’S HOUSE, EPITATH – if was a veritable cornucopia of motherly mayhem. And this doesn’t even count made-for-TV movies, which have supplied methods for actresses of a certain age to go batshit for decades. Among this number is MURDER IN LAW, a mostly-forgotten horror pic and the first and only (to date) film directed by Tony Jiti Gill.

Now, MURDER IN LAW isn’t an unheralded classic by any means, and there’s nothing it does particularly well that can’t be seen in other films, but it’s still got an entertaining psychotic performance in the lead, and Gill’s direction is solid enough to make you wonder what he’d have produced if he’d actually stuck with it. It certainly doesn’t deserve its obscurity – a mere 51 votes on IMDb, no reviews online that I could track down and not even a mention in Michael Weldon’s “Psychotronic Video Guide!” C’mon, people! The VHS cover box even sells this as much more of a slasher flick than it is, and proclaims it “The Mother of All Horror Movies!” It was even released twice, the second time by Monarch Home Video in 1992, so you’d think this would at least be on someone’s radar. 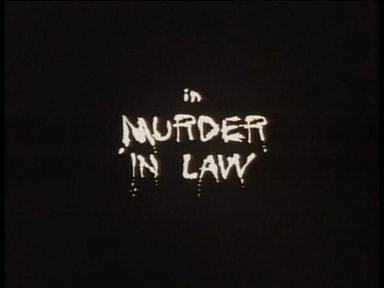 The murderous matriarch referenced in the title is Milly, played by Marilyn Adams, the wife of comic book legend Neal Adams. In the film’s opening sequence, Milly escapes from the lowest-security asylum in film history by packing up, walking out of her cell, and strolling out the front door. Sure, she ends up having to kill an orderly outside the building, but on the DREAM TEAM-to-HALLOWEEN scale of metal patient escapes, this barely ranks a 12 MONKEYS.

Milly finds her way to the San Francisco home of her son Bill, an average family man played by Joe Estevez. Bill’s domestic life is about as generic as an ‘80s family can get – his blonde wife Arlene (Chicago area actress Sandy Snyder) is a high-powered executive, his son Todd (Darrel Guilbeau, best known to genre fans as the young Ricky in SILENT NIGHT DEADLY NIGHT PART 2, but now a prominent anime voice actor) plays softball, his daughter Melissa is boy crazy, and his busty housekeeper Carmen has an inexplicable accent. 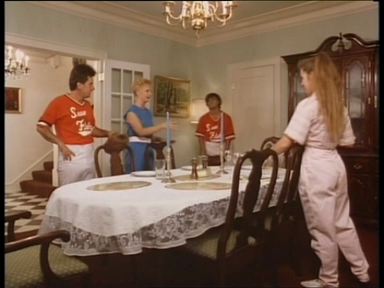 When Milly arrives, however, pinching the cheeks of her son and re-introducing herself to the family that, for the most part, doesn’t remember her, things start devolving into chaos. She quickly offends Carmen, calls Todd “Bill Jr.” much to his chagrin, and acts, well, generally like you’d expect a character playing an escaped mental patient to act.

The family isn’t too keen on her staying with them, save for Bill, who allows her to stick around in her guest room for some much-needed family bonding time as she’s been gone for ten years. Millie explains that she’s been living in Paris, and was married to a French man, and provides no further explanation, nor does the asylum bother calling Bill to inform him that HIS MOTHER WHO HAS BEEN LOCKED UP FOR SEVEN YEARS ESCAPED AND KILLED AN ORDERLY. This is either a statement on Ronald Reagan’s treatment of the mentally ill, or just an effort to move the plot along. It’s your choice. 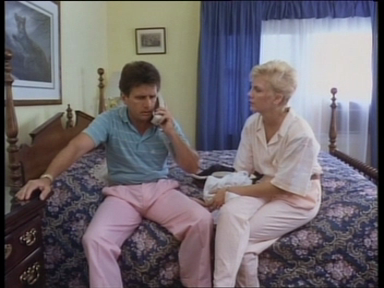 Despite what you may think, no, Joe Estevez’s insane mother did NOT dress him for this scene.

Obviously, this being a movie called MURDER IN LAW, eventually she goes psycho on a few ancillary characters (Carmen manages to seduce Todd before she’s inevitably offed) before starting to take a stab at the family themselves. There aren’t a not a lot of twists and turns to the proceedings, and in different hands, the screenplay could have easily been turned into a made-for-TV flick.

Gill, however, keeps the absurdity entertaining, pacing the film well and giving us plenty of nicely-framed shots that feel like they should be POV shots and make the film that much more unnerving because they aren’t. We also get to wallow in plenty of close-up of Milly, who look of Harvey Keitel playing Anne Ramsey Gill utilizes to full effect. 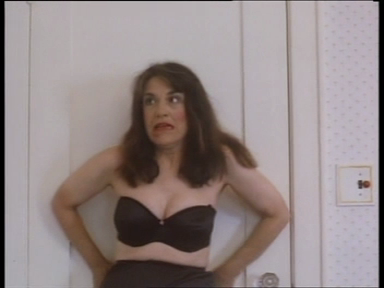 A grand dame horror flick’s entertainment factor rests entirely on the leading lady, and in Adams, MURDER IN LAW is a winner. Playing Milly as someone who wavers wildly between a sadistic vagrant and a dreamily-eyed nostalgic, Adams steals every moment she’s in, absent-mindedly uttering lines like “Your fuck sounds kept me awake last night” while at the breakfast table in a revealing neglege, and massaging a piece of “art” that resembles a dirty vibrator. She’s a horrendous human being to deal with, but she’s played sincerely enough that it comes off like a genuinely disturbed woman these people just have to deal with because she’s family.

Granted, the movie itself is a bit on the messy side. It’s pitched at times like a thriller, but then delves into moments of dark comedy that don’t quite work – one joke in particular is almost exactly the same as one that appears in the same year’s WAR OF THE ROSES and played to elicit the same effect. It’s almost as though they decided to turn the film into comedy halfway through filming. 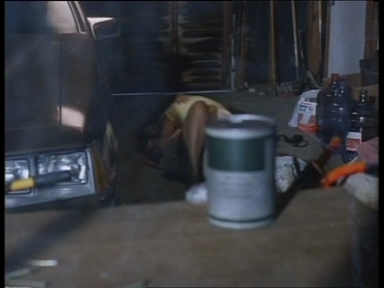 Least conspicuous hiding of potential nudity ever. Did Guilbeau have some kind of butt rash they didn’t want to show?

MURDER IN LAW certainly isn’t a bad film – even when Debra Lee Giometti’s ridiculous Carmen is complaining about Milly, it’s still an entertaining ridiculousness – and the performance by Adams alone gives over-the-top horror fans something to grab on to. Even if it’s tonally all over the place, Gill’s freshman feature deserves better recognition than it’s gotten, and it serves as an intriguing enough sample to make you wish he’d gotten a second chance.