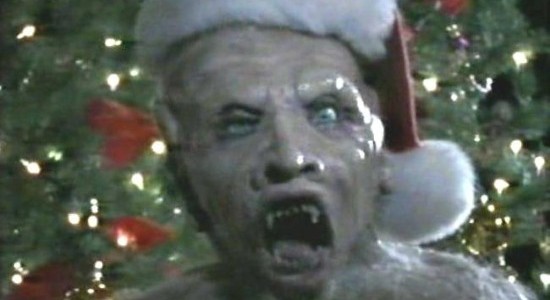 There are so many Christmas themed horror movies, it’s basically its own sub-genre. From GREMLINS to ALL THROUGH THE HOUSE, INSIDE to the SILENT NIGHT, DEADLY NIGHT series, there are all kinds of yuletide offerings for the horror hound. Obviously, with such a proliferation of options, the range of quality with each film varies as well. But for those dedicated few that enjoy terrible movies with awful effects and sleazy plots, the go-to Christmas film should be ELVES. If viewers are seeking a new bad movie to love for the holiday season, this 1989 film directed by Jeff Mandel has a lot to offer and will soon find its way into their advent calendar of screenings.

For the unfamiliar—which includes most people as the film is an obscure horror treat that’s still only available on VHS (though simple searching may turn up a copy online)—here is the IMDB plot synopsis for ELVES:

A young woman discovers that she is the focus of an evil Nazi experiment involving selective breeding and summoned elves, an attempt to create a race of supermen. She and two of her friends are trapped in a department store with an elf, and only Dan Haggerty, as the renegade loose-cannon Santa Claus, can save them.

Now, to be fair to the film, the department store scene is just one of many head scratching moments of befuddlement. But the Nazi experiments? Selective breeding? GRIZZLY ADAMS as the loose-canon Santa? Yeah that’s all in there. However, the title is a bit of misnomer as there is only one titular elf running throughout the film, as opposed to an army of the little guys plaguing a town (or family). Perhaps filmmaker Mandel was looking to tie the film in with the weird “small creature attacks community” boom that happened in the ’80s with films like GREMLINS, MUNCHIES, CRITTERS, and others. For whatever reason—most likely budgetary—there is only one elf creature running around and causing trouble. And this thing…it’s a bit rough. Stuck in a permanent expression of yelling, the puppet is mostly just the head and shoulders, with some feet and hands thrown in as well, and lacks any sort of articulation or emoting. Which may be why it’s shown so little, and in fact does so very little throughout the movie, taking a backseat to the incestuous Nazi eugenics plot that Dan Haggerty’s Mike McGavin is trying to unravel. 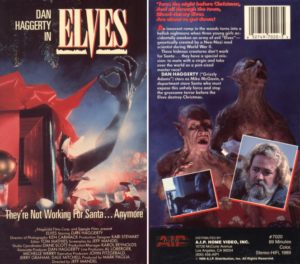 The film centers around Kirsten (Julie Austin), a put upon waitress that hates Christmas and accidentally summons the horrid creature to the earthly realm when an anti-Christmas summoning (???) goes awry. Soon the little beast is attacking anyone that runs afoul of the girl, while Kirsten’s grandfather’s Nazi pals are scrambling to ensure that an ancient rite comes to pass and Kirsten mates with the elf to create a new master race. Also thrown into the mix is a disgraced former detective, now turned department store Santa, played by Dan Haggerty who is trying to get to the bottom of everything—complete with trips to the library and two scenes of exposition from two different, but hilarious, professors about what is going on. Oh, and the film has this scene as well:

ELVES is, to put it simply, a mess. But it’s a delightful mess filled with some of the most random lines ever put into film—including the delightful one-two punch delivered by Haggerty to a Nazi that tried to kill him with a bomb: “What are you, a goddamned Nazi or something? Is that elf yours?” The plot is skeevy and convoluted, and barely makes any attempt at making any sense (the master race is a hybrid of a two-foot tall goblin creature? why?), but is all the more fun for the various hoops it tries to jump through before culminating in (implied) Elven-human copulation. Jeff Mandel (who also co-wrote the movie) has created such a unique and bizarre slice of Christmas filmmaking that it dares to be watched and consumed. From the ‘Sisters of Anti-Christmas’ opening to the genitalia trauma experience by that “Santa Said ‘Oral'” guy, all the way to the nonsensical ending with a magic crystal before a shot of the new elf hybrid in utero, ELVES is a singular trashy movie that is due for a yearly revisit around the holidays.