Since 1998, DAWN OF THE DEAD has remained a constant through my life. The first time I saw it, I had rented it from my local mom ‘n’ pop video store as a consolation prize for a major disappointment at the time (I found out that myself and many others were passed up as extras for ANY GIVEN SUNDAY the day we were scheduled to go to the set). From that mixed emotional day to when I got the DVD from Anchor Bay that finally, mercifully gave me my own home video copy of the film, and then the blessed upgrade to the essential four disc set that I own to this day (and will never give up, even if my beloved film finally gets a newer, high definition conversion), the film has been in heavy rotation in my days. When George Romero passed away, it was a tough day for me. I watched the extended cut of DAWN that night and through this tragic loss, I was finally able to see it on the big screen courtesy of Alamo Drafthouse’s memorial screenings (with my friend Chris, with whom I forged a great friendship when I spotted his DAWN OF THE DEAD shirt). So for all these memories, attached to events both good and bad, I’m thankful for DAWN OF THE DEAD. 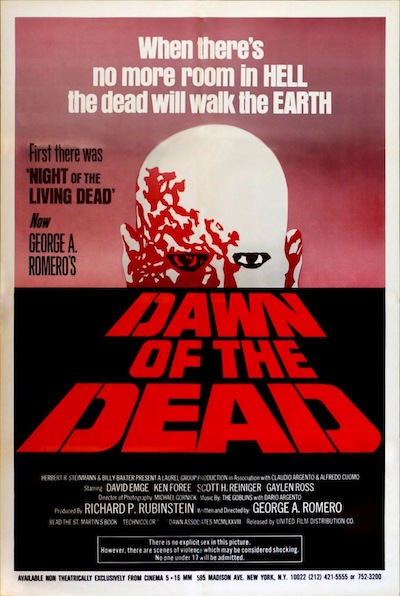 If you’ve never seen DAWN OF THE DEAD, I suppose you could whittle its essence down to a very simple plot: following a zombie outbreak, four survivors in Philadelphia—two SWAT officers, Roger (Scott Reiniger) and Peter (Ken Foree), and two staff members of the local news station, Stephen (David Emge) and Frannie (Gaylen Ross)—abscond with the news station’s helicopter and flee the chaos of the city, holing up in a shopping mall as a means to settle down and hope the whole thing blows over. It’s a singular experience, one of horror’s first epics with a score by Goblin that’s as bombastic as the film’s aspirations. This was Romero announcing long before JOKER that “we live in a society.” From the moment the opening credits hit the screen, we’re thrust into an inferno, a necessary tonal pivot from the spooky, haunted black and white landscape of the previous decade’s NIGHT OF THE LIVING DEAD. Romero never lets the thrum of anarchy go quiet for too long, and when it does, you can bet that something is coming down the pike to upset the applecart.

This is why the Extended Version of DAWN works so much better than the theatrical (even though I know this is Romero’s preferred version). We watch these four lives play out over the course of endless day and nights, and gradually the rot seeps in and with the film’s length adding to our feeling of a growing dark chasm. Romero never destroys the core group and have them blow up at each other when other, lesser filmmakers would have—especially in modern horror films. And yet, despite all darkness that the climax builds to, Romero leaves us with an ending bristling with the possibility of hope, or at least as positive as you can be, considering that society is all but on its way out the door, and turning an optimistic eye on the writing from NIGHT OF THE LIVING DEAD.

The other thing Romero lets us never forget is that in a world where reanimated corpses are walking the earth, there are people who still remain as inhumane as possible. Like racist SWAT officer Wooley (Jim Baffico) at the beginning of the film who looks upon the residents of the tenement like they were vermin or the bikers at the end of the film deriving glee from the executions of the zombies, even as their own are getting cut down. Like his best collaborator, Stephen King, Romero found the heart of blue-collar horror and the oft-used venom that ran through their hearts. If you think that’s not how society would react when it all comes tumbling down, you’re lying to yourself. The scene with the rednecks chugging beers and capping zombies is probably the most accurate representation of the United States ever committed to celluloid.

The news interludes that crop up throughout the runtime are not too dissimilar to how modern 24-hour news cycles tend to drum up fear amongst its viewers, with its pundits: the cycloptic Dr. Rausch (Richard France) and Mr. Berman (David Early) bellowing at the cameras about the menace plaguing civilization aren’t calming those watching—they’re frightening and igniting them. Rausch’s palpable rage as he roars and fear mongers about the zombies is not too far off from the average xenophobic mouthpiece on Fox News. It should sound deeply familiar to anyone watching the news. 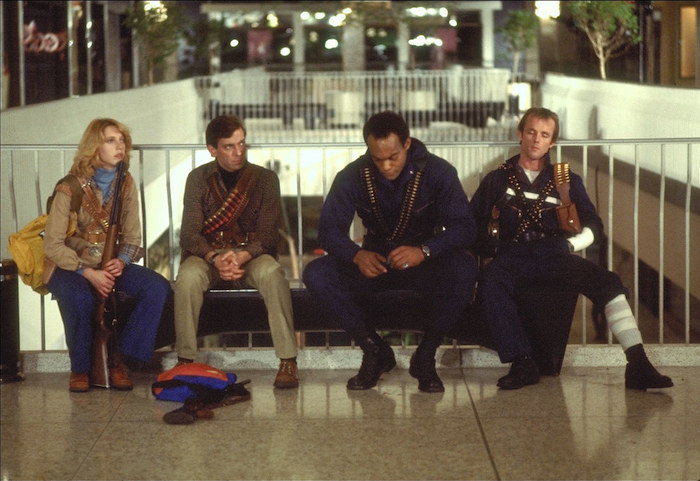 Romero’s casting is insanely on point with the physically imposing Ken Foree, using his sizable bulk to great effect—the first time we see him he’s cloaked in his tactical gear and his face is covered by a gas mask, a striking image on its own—only to have the film subvert our expectations; Peter is a tough dude, sure, but goddamnit, he’s a caring protector. The gradual push and pull of his inextricable friendship with Roger is one of the reasons why my heart is incapable of letting go of DAWN OF THE DEAD. Their banter as they head out on their doomed journey to get trucks to block the mall’s entrance is endlessly charming, and after Roger’s life-ending bite from a zombie, I feel the sorrow that Foree exudes as he watches his friend slip into the afterlife.

One of the greatest choices that Romero makes in this movie is sparing us the shot of Peter disposing of Roger. In a film filled with gruesome deaths, that would be one that would be too painful to watch. Sure, the makeup is a little off-kilter with the silly looking blood and the zombies’ complexion a little too blue, but that doesn’t neuter the savagery of the violence herein. The gore by aces splatter maestro Tom Savini is as gut-wrenching as it is haunting (there’s a scene where one biker is being munched on, his hand slowly gripping one of the zombies that’s consuming him, that remains so bluntly beautiful). It’s the reason I reserve my DAWN re-watches for Thanksgiving.

Time after time, when I re-watch DAWN OF THE DEAD, I’m awe-struck by the brilliant characteristics that Romero’s script bakes into our four leads. Since we’re going to be spending the bulk of the two plus hours run-time with them, it’s a savvy approach, because if they were unlikable jerks, we’d be begging for their gruesome deaths before act two (a problem some have with the follow-up entry, DAY OF THE DEAD—but not me). There are essential moments threaded throughout the film that make the characters flesh and blood. For me it’s watching Roger at the beginning of the film—starting off calm and cool, awaiting the raid on the apartment complex to stop the gang members and their reign of terror and to watch his face sink as he realizes that they’ve stumbled onto a hell unlike any other. Reiniger’s silent acting is masterful here as everything he knew crumbles around him.

There’s Frannie confronting the men in the group and telling them in no uncertain terms that she deserves her agency; her refusal to scream when attacked by a zombie was something that Ross asked of Romero (one of Romero’s talents as a filmmaker is to listen to his actors’ impulses). David Emge’s performance as Stephen first portrays him as almost cowardly before he becomes one of the gang through his quick, analytical thinking to the point when his death occurs, it’s downright heartbreaking (and man, is Emge one of the best zombie actors on film? I say yes). As for the aforementioned Ken Foree who chills us to the core with his great, iconic speech—“When there’s no more room in Hell, the dead will walk the Earth,” as they listen to the zombies rhythmically beat their limbs against the doors of the heroes’ sanctuary. 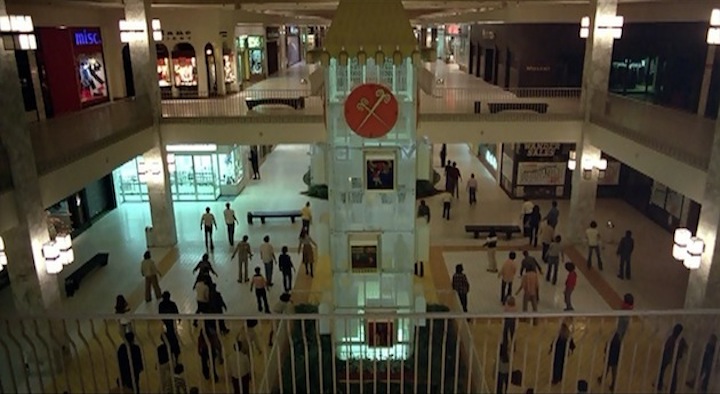 I’ve worked a few Black Fridays in retail in my life, and seeing people rampage in search of The Next Great Deal isn’t too far off from the mindless ghouls that hungrily search for The Next Tastiest Brain. Most folks liken Black Friday dust-ups to THE PURGE, but I think the best filmic comparison came from our beloved George Romero himself, continuing his trend as a filmmaker who always had his finger on the pulse (or lack thereof) of what made Americans tick. The days where people had to shuffle out to their towering shopping meccas, cash in their gripped hands and consumerism on their minds, in search of the electronic gizmos, gadgets, and goods they so desperately need have passed, replaced now with the instant internet access to all we need at the push of our fingertips thanks to people like Jeff Bezos and his Blofeld-like grasp on the world. The locations have changed, the makeups look a little wonky, but DAWN OF THE DEAD still holds up 40 years later. And do not bring up the spirited, but soulless remake to me. I love the talent involved in the film, but to me, it’s blasphemy.