This is the kind of news story we hate to report but we wanted to pass it along just so we can send some good grindhouse vibes to a living legend and one of our favorite martial arts stars of all-time. Twitch is reporting that Gordon Liu, star of THE 36TH CHAMBER OF SHAOLIN, EIGHT-DIAGRAM POLE FIGHTER, KILL BILL 1&2, and over 100 other films, has recently moved into a nursing home following rehabilition for a stroke the 56 year old suffered last year. 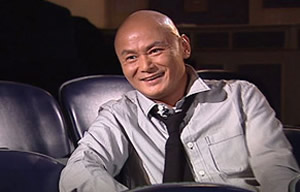 According to Twitch “he has refused to see anyone from the entertainment industry, except for Eric Tsang and Leung Ka Yan who visited him recently as representatives of the Hong Kong Performing Artistes Guild.” Always the gentleman, Gordon Liu has asked Tsang to “pass on the message that he will actively work towards improvement and for people not to worry about him.”